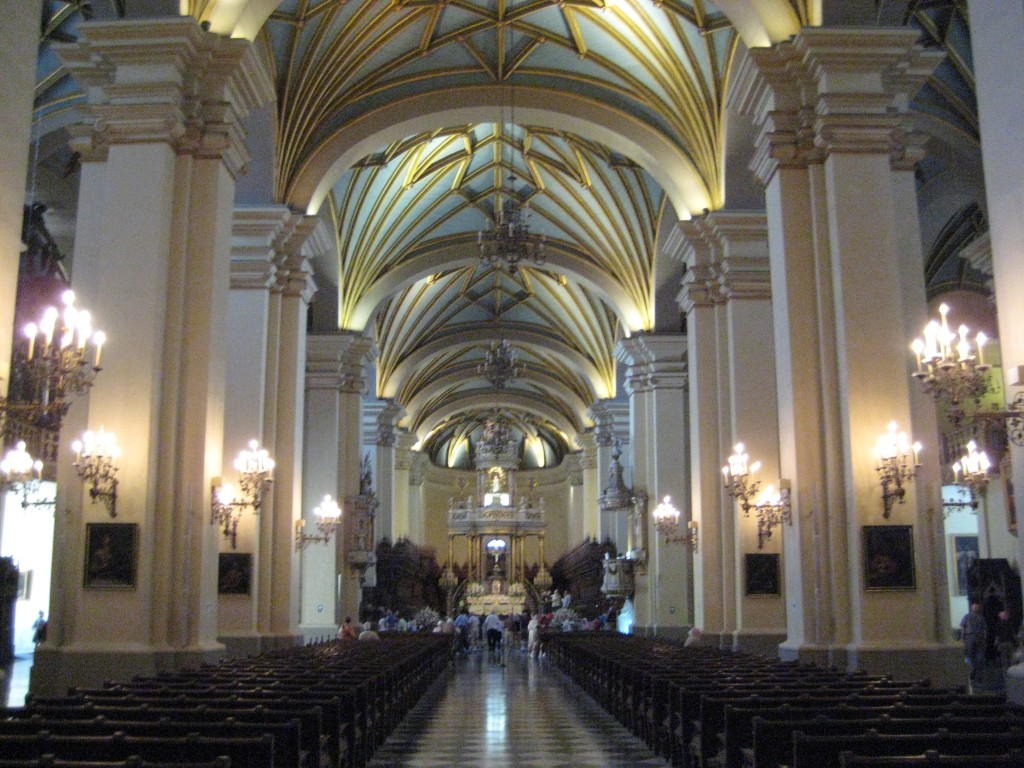 The city of Lima was founded in 1535 by the Spanish Conquistador Francisco Pizarro. At the height of the Viceroyalty, virtually all goods produced in Peru, Argentina and Bolivia were carried over the Andes by mule to Callao, to be shipped to Panama, carried overland to the Atlantic and then transported to Spain via Cuba. The large port of Callao is approximately a one-hour drive from the city center of Lima. Lima is a huge city with approximately ten million inhabitants; nearly one third of Peru’s population lives in Lima. Eight percent of the population is of Chinese ancestry and thus you see many Chinese restaurants.

During the 1980’s Lima suffered from terrible safety concerns as the Sunshine Path terrorists came from the countryside into Lima to protest the rich and the way the government was running the country. The violence was so severe that it was unsafe for people to be out in the streets and they began to wall in their homes and add tall wrought iron fences, many with electrical fencing atop them to feel safe in their own homes. While it is much safer today, many of these walls and electrical fences still exist today.

Some parts of town are filled with graffiti and do not look particularly well kept, while other parts of town are clean and the homes are beautiful. You see homes that are very traditional in style such as colonial, Spanish, and English Tudor mixed with modern and any style in between. Many streets are lined with high-rise condos and apartments to accommodate the enormous number of people in the City.

While it is mid-January we still see many Christmas trees in homes windows and the public parks and businesses still have holiday decorations up. We even saw a Santa Claus in the main square.

Taxicabs are unregulated which allows anyone who would like to call themselves a taxi can put a sign on their car and charge any amount that the traffic will bear.  Buses and bus routes are privately owned and most anyone can get a job driving a bus. They stop to pick up people anywhere along the bus route and charge whatever they can get. At the end of the day the bus driver is required to share the fares with the owner of the bus.

On this day we visited the main square in downtown, which is beautifully landscaped and maintained. On the square is the Government Palace, Town Hall, Cathedral of Lima and the bishop’s palace. The Cathedral is very large and beautiful with an ornate altar including a statue of Christ carved from ivory, huge vaulted ceiling, mosaics, stained glass windows and many elaborate side altars. The crypt of Francisco Pizarro is here as well.

Another stop was the Convent of San Francisco, considered to be the most important religious monument in Lima, built in 1542 in Baroque style and consecrated in 1673. Included here are carved wooden ceilings, many original oil paintings including one of the last supper with a round table, murals, statuary and a lovely church.

A newer section of town called Miraflores is a newer section of town built over the last 40 years along the coast. This is the more touristy section of town with many of the hotels, restaurants and shops located here. Starbucks, KFC, Pappa John’s, Domino’s and many more familiar establishments can be found here. There is also an Inca Craft Market, which sells all types of local handicraft items such as silver, textiles, sweaters, leather goods, paintings and more.  Kent used his Spanish to inquire about buying me a pair of Alpaca under panties.  There are many large buildings with one stall after the next, many of them selling the exact same merchandise.

Meanwhile back at the ship, we enjoyed a Gaucho barbecue prepared poolside for our dinner. They had grilled chicken, lamb chops, sausage, pork, steak and shrimp accompanied by corn on the cob, salads, vegetables, baked potatoes and many desserts. The food was excellent.

A local entertainment group by the name of Inkamerica was onboard to provide the night’s show. The culture, colors and sounds of Peru were expressed through dance and music. They were an excellent dance troupe in beautiful Peruvian dress showing us their native dances from the mountains, jungle and coastal regions. They were accompanied by a group of local musicians. The entire ensemble was extremely well rehearsed and synchronized making for an enjoyable evening.