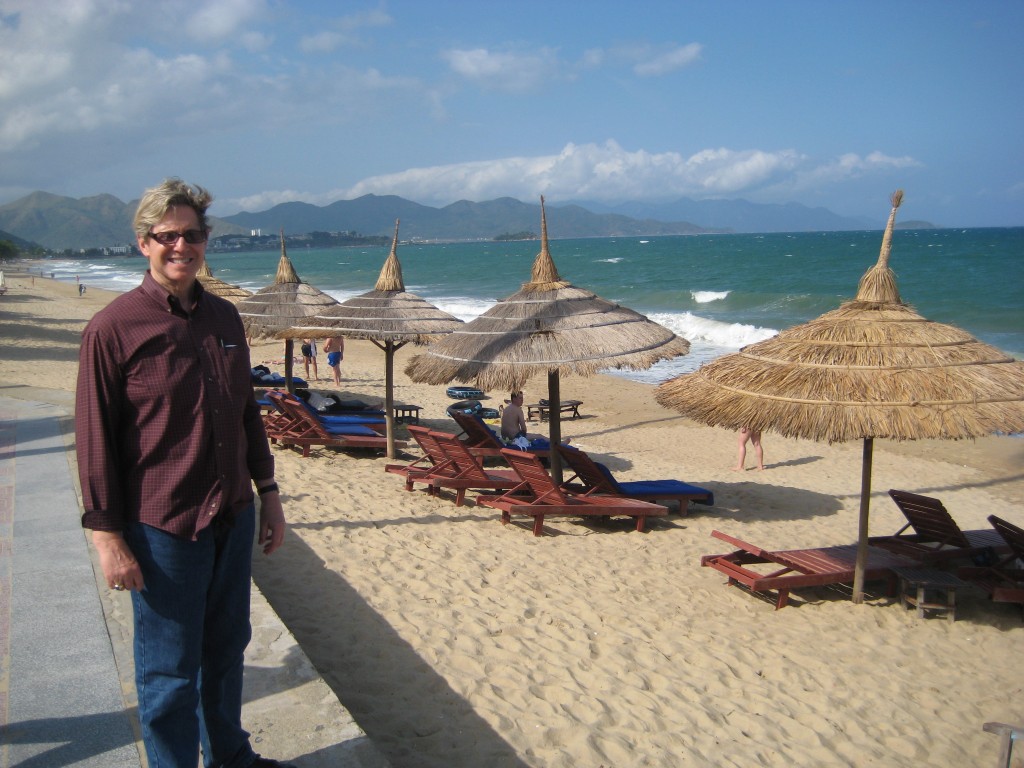 Nha Trang is the capital of Khanh Hoa Province, Vietnam, and is well know for its pristine beaches and excellent scuba diving. They have over 600 hotels that cater to guests from all over the world, with over 20% of the tourists coming from Russia. Most of the local development has been in recent years through government and private investment, including five star hotels with rooms renting for as much as $7,000 per night.

Our tour took us to the Po Nagar Cham Towers, one of the few remaining testaments to the ancient Cham civilization. The towers were built between the 7th and 12th centuries when Hindus worshipped here. Today, Vietnamese Buddhists come to Po Nagar to pray and make offerings. The main tower is dedicated to revered Po Ino Nagar, wife of Prince Bac Hai and the Shiva’s only known female incarnation. The view from here out over the Xom Bong Bridge and the abundant, colorful red and blue fishing boats in the Nha Trang Harbor was beautiful.

Our next stop was Long Son Pagoda founded in the late 19th century and has been rebuilt several times. It is currently home to less than ten monks. The entrance and roofs are elaborately decorated with mosaic dragons made of glass and ceramic tile. Here we climbed 152 steps to visit a giant 78 foot tall white Buddha seated on a lotus blossom. Here you could see views out over the city as well as the surrounding cemetery with its many niches for people’s ashes to be buried. Many people only have the ashes here for a few years before they are removed and scattered at sea. At this site there is also an extremely large reclining Buddha, which was an interesting pose that we are not used to seeing.

The Dam Market with its two stories of shops was our next stop. Here we saw outdoor vendors selling fruits and vegetables as well as other perishable items. However inside the market was reserved for more permanent shops of fabrics, clothing, souvenir items, jewelry and more.

We then visited an embroidery shop where we saw a demonstration of this local handicraft. Many young women are employed here ten hours a day, six days a week to create the beautiful detailed embroidery. They embroider many items like handkerchiefs, scarves, robes, art you hang on the wall and clothing. The prices are quite reasonable given the amount of time it takes to create just one piece of embroidery.  Some of the young women are already wearing glasses as a result of the work they do.

After returning to the ship from our tour we took the ship’s shuttle service, along with our friend, Jenn, back into town to have lunch. The bus dropped us off at a hotel just across the street from the main beach so we found a restaurant right on the sandy beach for lunch. It was very warm and humid but there was a nice breeze, which made the afternoon a pleasant one. Lunch was very reasonable at about $9.00 a person, including a soft drink or fresh squeezed juice. We tried things like fresh grilled fish and chips, sweet and sour fish with rice, chicken with peppers and chili’s. Fresh juices like watermelon or coconut juice ran $2.00 a glass.

Shopping was plentiful pier-side as there was a plethora of vendors who had set up large booths of merchandise right next to the ship. Folks were buying everything from clothing and souvenirs to suitcases to get things home.

A local group of dancers and musicians performed a lovely afternoon show in the Queen’s lounge before we sailed away. The show included several unique instruments as well as several local dances in festive, colorful, cultural dress.

The evening’s entertainer was a gentleman by the name of Jonathan Clark who has been performing a show for the last six months at the Rivera Hotel and Casino in Las Vegas. He does a bit of a variety show including comedy, singing in his own voice and vocal impressions of many famous singers like Johnny Cash, Ray Charles, Tony Bennett and Tom Jones.