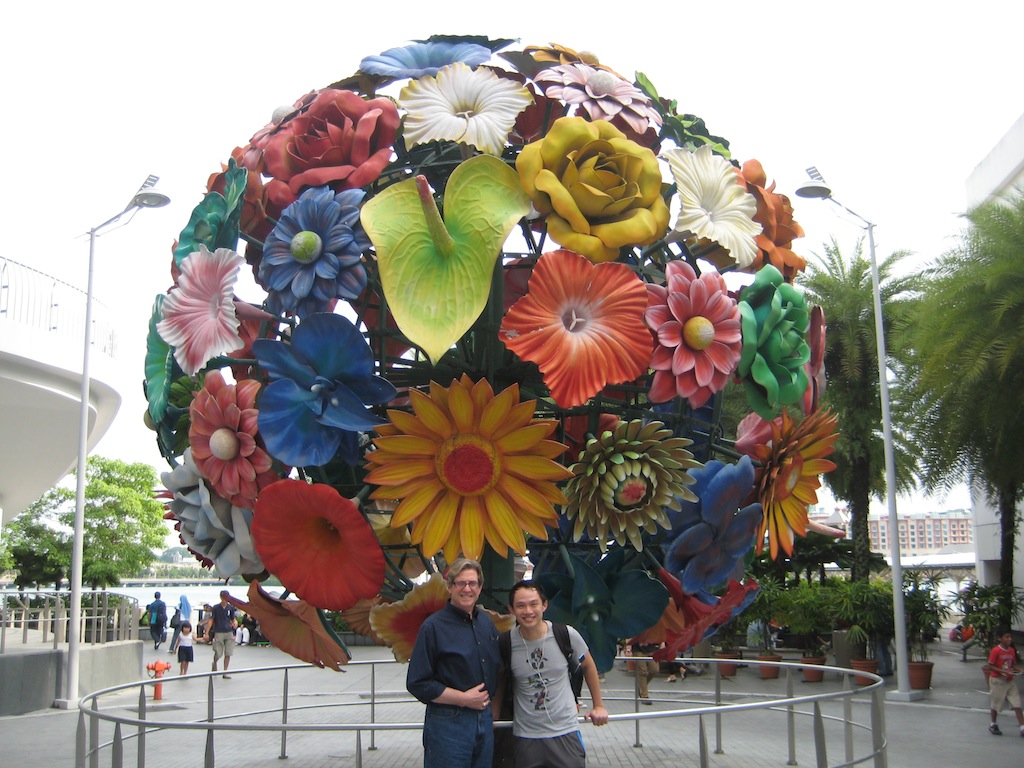 Kent and our Student Wei

St. Patrick’s day was celebrated with a morning party in the Queen’s lounge. It was a festive occasion with many guests having brought special hats, clothes and festive attire. The orchestra and cruise staff were decked out in green sequined jackets with tails. Music, games, trivia and Irish jigs filled the morning. Those who participated could win bottles of champagne and prizes.

Robert Schrire’s lecture was titled: Why Tyrants Survive? He gave insight into how tyrants win power and lose power and weather or not tyranny has a future in the modern world. His conclusion was that while tyrants still survive, the list is growing shorter with information in the modern world.

By 2:00pm we had arrived pier-side in the city of Singapore. Singapore is an island country and the smallest country in Southeast Asia, located on the southern tip of the Malay Peninsula. Singapore was the site of several ancient port cities and a possession of several empires in its history before the United Kingdom colonized it in the early 19th century. The Japanese occupied it during World War II before a merger established it as part of Malaysia. When Singapore acquired independence, having few natural resources, it was socio-politically volatile and economically undeveloped. Foreign investment and rapid government-led industrialization grew an economy which relies on exports of electronics and manufacturing, primarily crude oil refining. Singapore has the second busiest port in the world… second only to Shanghai. It has the highest standard of living in Asia and 83% of the population lives in housing built by the government. More than half use the efficient public transportation system daily maintaining low pollution levels.

We met up with Wei, one of our students from San Diego State, who we met when he was 20 and he is now 27. Wei is from Malaysia but has been working in Singapore for a headhunter employment agency. He recently quit his job and will be returning to Malaysia for a better paying job with better benefits. We enjoyed catching up with him and his life over dinner at a Peking duck restaurant.

Wei then took us to meet Jackie, a friend of his who studied at SDSU as well, and is from Brunei where her family owns beauty salons. We had a variety of desserts at a nearby shopping center.  Our next stop by public transportation was the Night Safari, the world’s first wildlife park, built to be viewed at night. Set on 98 acres of dense forest, the park–through subtle lighting–allows guests to view 1,000 nocturnal animals of 100 species in vast natural habitats. You can either take an open-air tram around the park or walk along many footpaths to view the animals. They have a fire eating show as well as a show featuring a variety of the park’s animals. It is a very beautiful park and we were able to see a wide variety of animals including Cape buffalo, African bongo, blue sheep, striped hyena, golden jackal, rhinoceros, otters, snakes, giraffes, deer and more.

It was a late night with us not returning to the ship until around midnight.