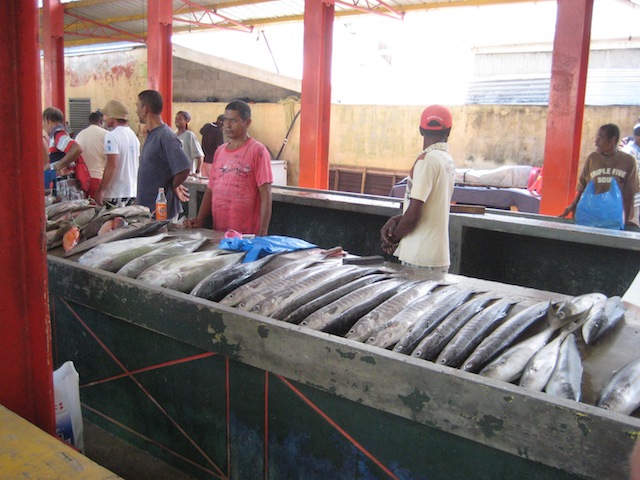 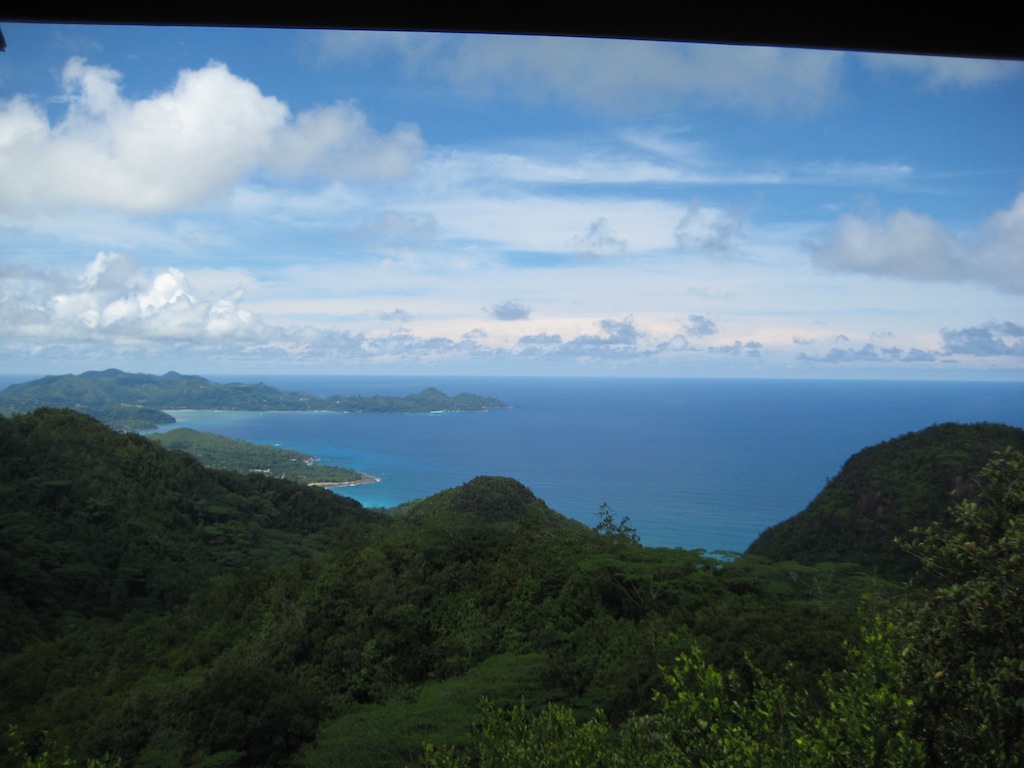 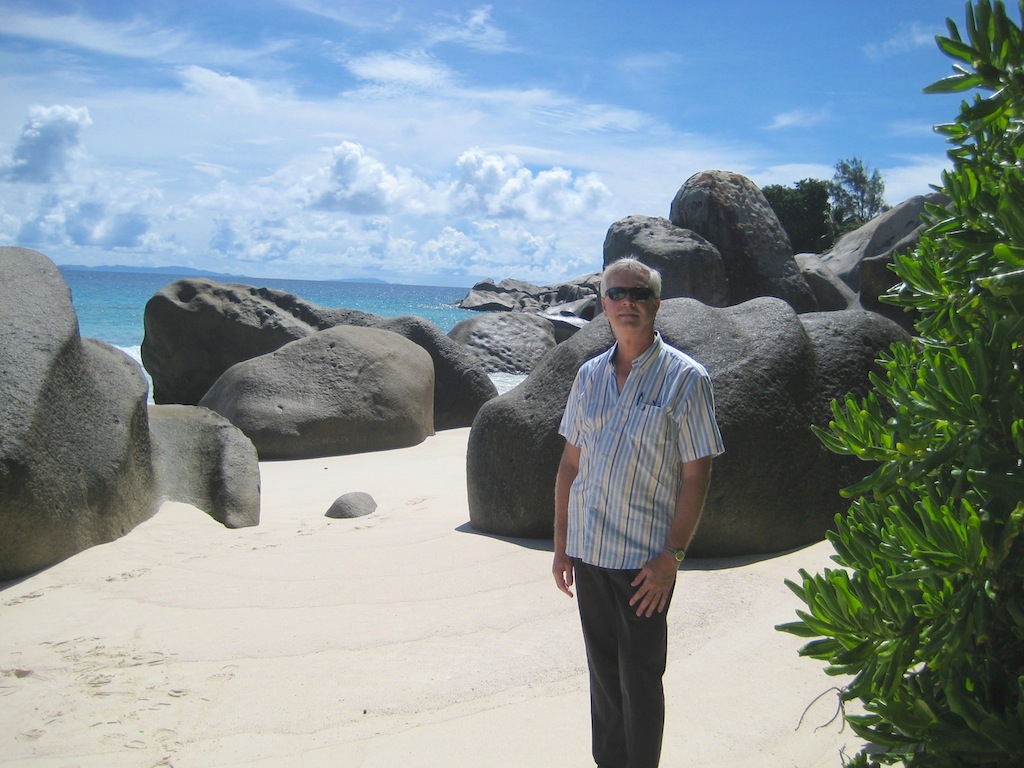 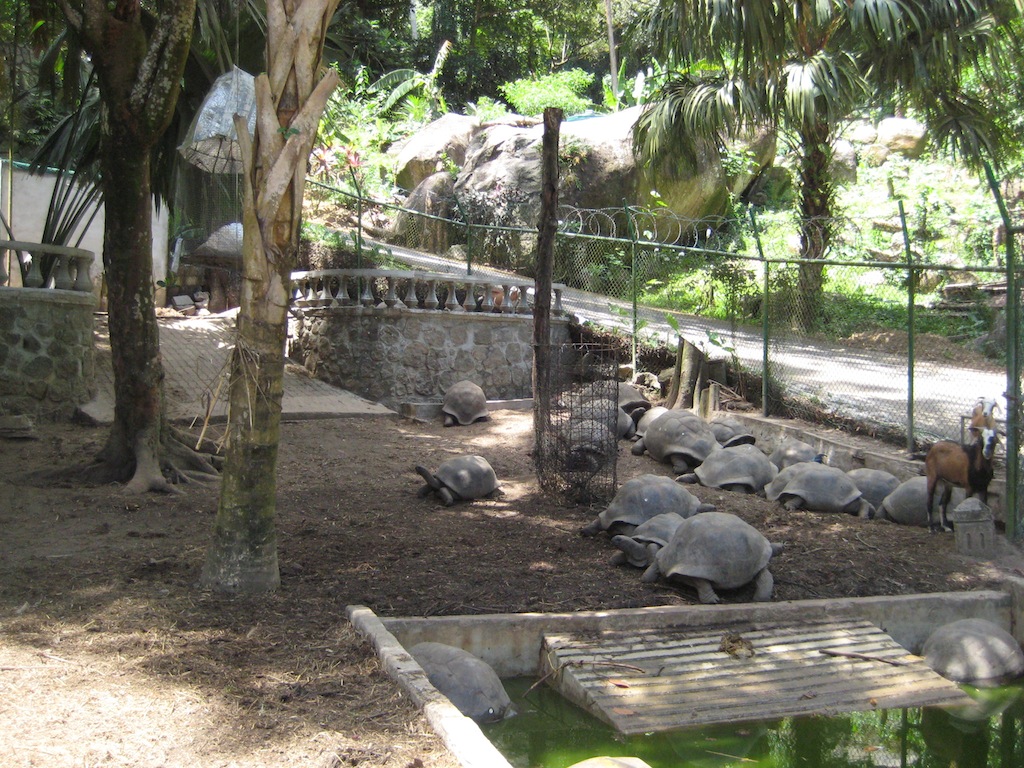 The Seychelles is a group of about 115 islands that lie 990 miles off the east coast of Africa. The three central islands – Mahe, Praslin and La Digue – are granite, while the outlying islands are coral atolls. Unlike most similar islands, the Seychelles are not volcanic – they seem to be the peaks of a huge underwater plateau that fell off the edge of India about 65 million years ago. Victoria, located on the island of Mahe, is one of the smallest capital cities in the world and the only major port in the Seychelles. Victoria is also the only town in the country, as every other settlement is a village….and it boasts two traffic lights!

Our tour today was a private tour with about 15 fellow passengers arranged months ago through the Cruise Critic website. Our first stop was in the heart of Victoria with its two traffic lights and about 25,000 residents. It was here that we visited the local market where locals were selling mostly fresh fish, vegetables, fruits, vanilla and spices. In the center of town is a clock tower, erected in 1903 to celebrate the Seychelles becoming an English colony. The clock tower is a silver tower and is a replica of the clock tower outside Victoria Station in London.

From here we headed north, following the gorgeous coastline with white sand beaches dotted with huge granite boulders. The beaches were mostly deserted, each more beautiful than the previous one. They are extremely clean, well maintained and the water is a sparkling clear turquoise blue. We continued along the coast to Beau Vallon Beach which is a village where you find many hotels and resorts for tourists and a busier beach although no less beautiful.

We traveled the winding Sans Souci Road to the historic Mission Lodge with its ruins of a school for the children of freed slaves. From this lookout high atop a hill you could enjoy views out over the island and the Indian Ocean. At this point we are now within the Morne Seychellois National Park, which protects about one quarter of the island from development. Most of the island is covered in dense tropical vegetation from cinnamon trees, tea plants, wild mint, bougainvillea, orchids, hibiscus, gardenia, coconut palms and fruit trees.

We stopped along the way to see a large private collection of giant tortoises. Not as large as some we have seen in the Galapagos Islands but very large, with some being over sixty years old and standing about 18” high and 24” or more across.   They tell us the tortoises can live to be 300 years old.

Lunch was at a local creole open-air restaurant right on the beach where we enjoyed chicken and fish curry with rice and sodas. This was located on the southeast shore of the island not far from our next stop, which was the craft village. The craft village was comprised of a cluster of individual cottages each with a different type of local craft represented. Many of the shops had the actual artists creating hand carved wooden ship replicas, paintings, pottery, jewelry, clothing and more.

Along our travels we saw several of the protected coco de mere palm trees, which is a double coconut and bears the largest nut in the plant kingdom. The coco de mere has both a male and a female palms, which requires bees to pollinate from the male to the female palm. The male plant has large phallic shaped flowering pods, while the female plant has a pouch that secures the double coconut. The unusual double coconuts when dried remind you of someone’s backside or even a woman’s lady parts. The trees are quite rare and are protected by the government.

The number one boost to the economy is tourism followed by the tuna fishing industry. The main tourists come from Europe, Russia and the United Arab Emirates, including a Sheik who has bought up considerable amounts of property and built an enormous residence on the highest peak of the island the size of a grand hotel. The languages spoken are French, English and Creole although a different version of creole than you might find in New Orleans. The native people have very dark skin like you might expect in Africa but they have softer features than what I think of from African people.

Before heading back to the ship in the late afternoon we took one more drive up to a lookout point giving us a spectacular panoramic view to the east overlooking Long Island, Cerf Island and Ste. Anne Island. All in all it was a great day with wonderful weather.

The evening’s entertainment was a gentleman by the name of Richard Gauntlett who is from London’s West End. Richard brought a variety show like you might have found during the days of Vaudeville. It was a bit of comedy, magic, juggling, singing and just silly fun. Everyone seemed to enjoy the show.