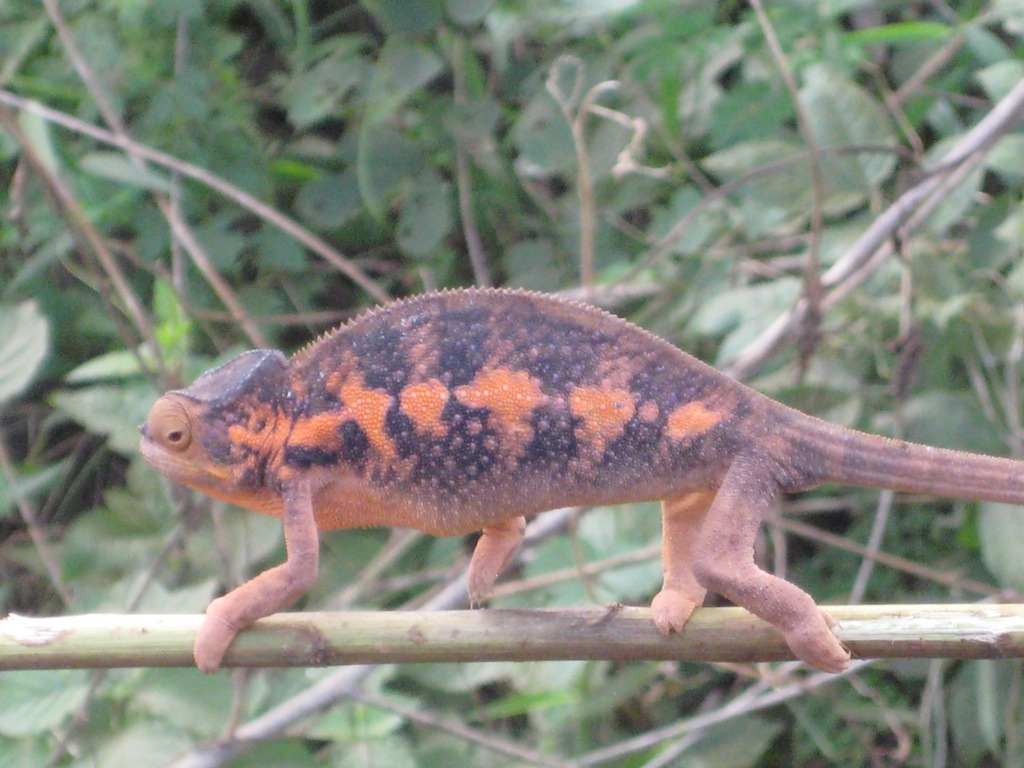 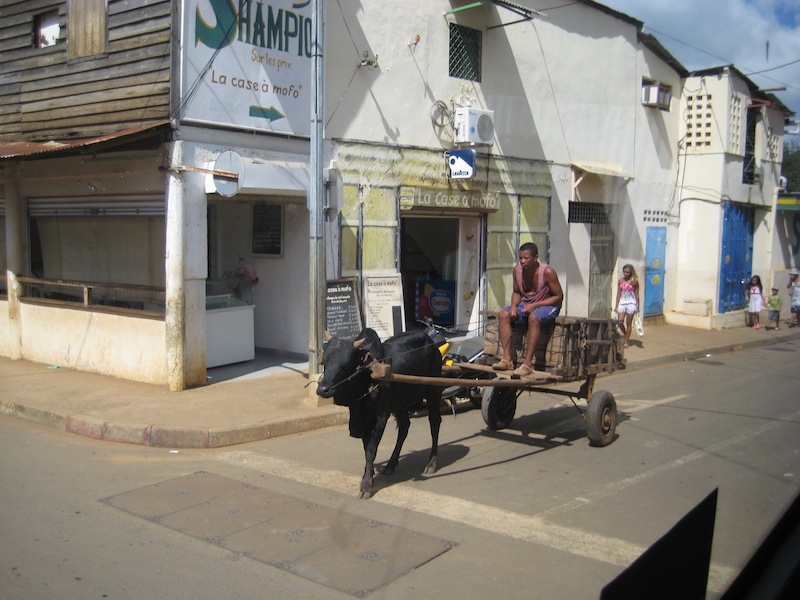 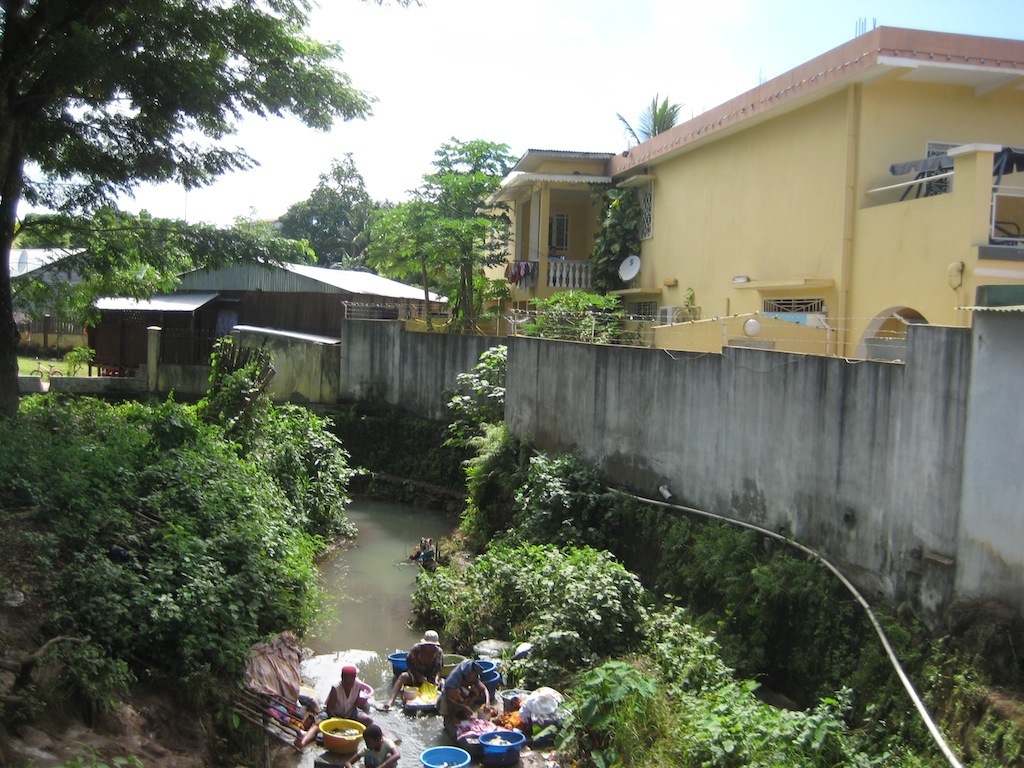 Nosy Be is an island just off the northwest coast of Madagascar and means “big island” in the Malagasy language. Nosy Be is Madagascar’s largest and busiest tourist resort. The volcanic island, located five miles from Madagascar, is 120 square miles and its highest peak on Mont Passot reaches 1,079 feet. The island has diverse geography ranging from harbors and broad plains to plateaus and desert regions. There are only two seasons: one hot and rainy, from November to April, and the other cooler and dry from May to October.

Madagascar’s long isolation from neighboring continents has resulted in a unique mix of plants and animals. Chameleons and colorful frogs are particularly interesting for their many shapes, sizes and designs. More than half the world’s known chameleon species are native to Madagascar and new frogs are constantly being discovered. The chameleons that we saw were colorful including fluorescent green, brown and black, greyish pink and light green and ranged in size from very small to a foot or more in length.

The weather was extremely warm and humid during our visit. With no pier to speak of we, are required to tender from ship to shore while the ship is anchored off the coast. The shore excursion buses were small in size, holding only about 15 passengers each, with no air conditioning. The locals who are black in skin color speak a Malagazy local language as well as French as it was once a French colony. Some speak English as well. The tours guides spoke English but they had little comprehension when asked a question so communication was difficult.

Our shore excursion took us out into the countryside where we saw many Malagasy villages and plantations. We saw an ylang ylang tree orchard from which they derive oil from the flowers used to produce perfume. They also grow rice, pepper and coffee. The rainy season provides enough water that the land is lush, green and a bit jungle looking with vines and dense vegetation. Many places we stopped we would find young men holding lemurs or chameleons and asking for a dollar to take a photo.

Most of the local people are extremely poor living in one-room shacks with no running water, no utilities, no toilets and little else. They sleep in the one room, usually cooking outdoors and using oil lamps for light. The people tend to shop daily at the local market, as they have no refrigeration. They do not have out houses but instead venture off into the forest to use as a toilet with a machete in hand to protect against animals and to make a clearing.

On the roads around town you see oxen in the fields and also see them pulling a wooden cart down the street laden with building materials or something. Few people own cars and the streets were filled with potholes.  Another common sight was women with faces painted with a mud-like color, then accented with African-like designs in white.  Some said the paint was for protection from the sun; others said it was to improve their complexion; others said it was for the Easter Holiday.

We visited the town of Dzamanzar, the island’s second-largest town; where we saw an unusual cyclone proof house resembling a cement igloo. Then we headed to Andilana Beach where we stopped at a five star hotel and resort for snacks and drinks. The resort was located on the beach with a beautiful pool, thatched roof buildings and tropical landscaped grounds.  About 16 young women danced and played wooden instruments the entire time we were there.  They were part of the Sakalava folksong and dance group.

The locals all seem to be selling something along the road. You would see a small table in front of a house with a few small bananas stacked up or a few small piles of red chili peppers for sale. Next door someone might be selling some rice or a few small lemons or fruits. Craft shops and stands were everywhere you went, making me think that they have a lot of tourists although we saw very few people outside of the major town of Nosy Be. The handicrafts included woodcarvings, embroidery tablecloths and some paintings. They also make spoons and things out of the oxen horns.

At the sail-away, we sat with Heidi and Andres and they introduced us to Joe and Maria from Key West.  They even bought us drinks, as we shared the day’s travel adventures.  We felt lucky we didn’t go on the lemur island tour to see the lemurs, as those who did reported they only saw 3 lemurs, but were taken to 1,000 souvenir shops!