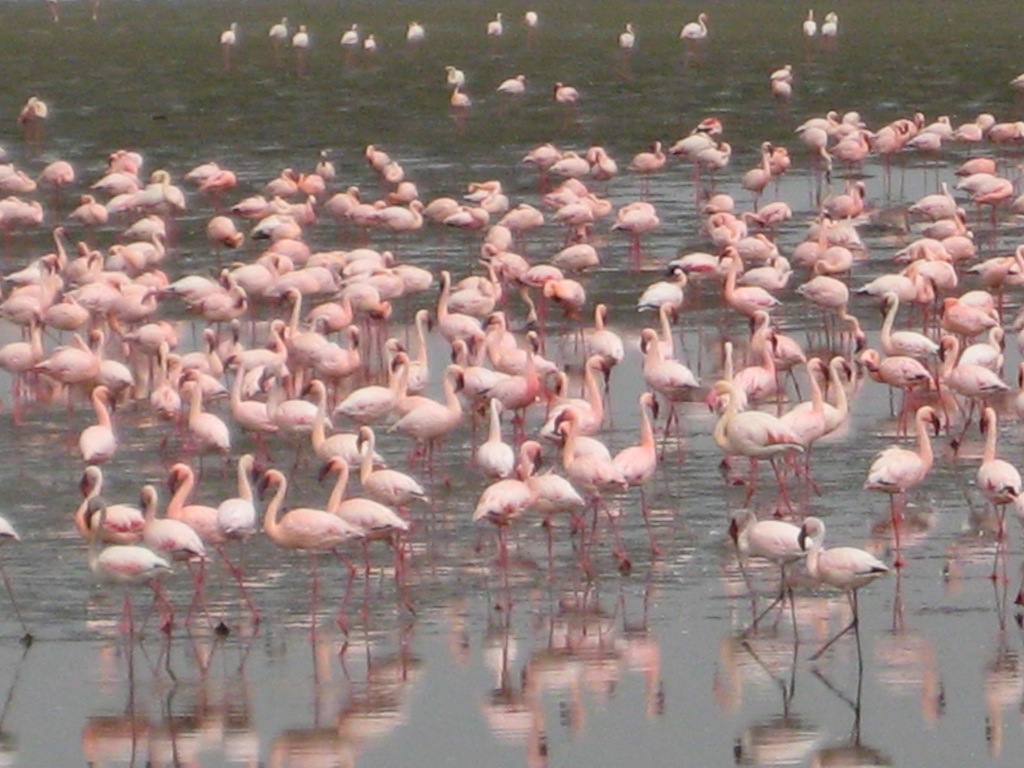 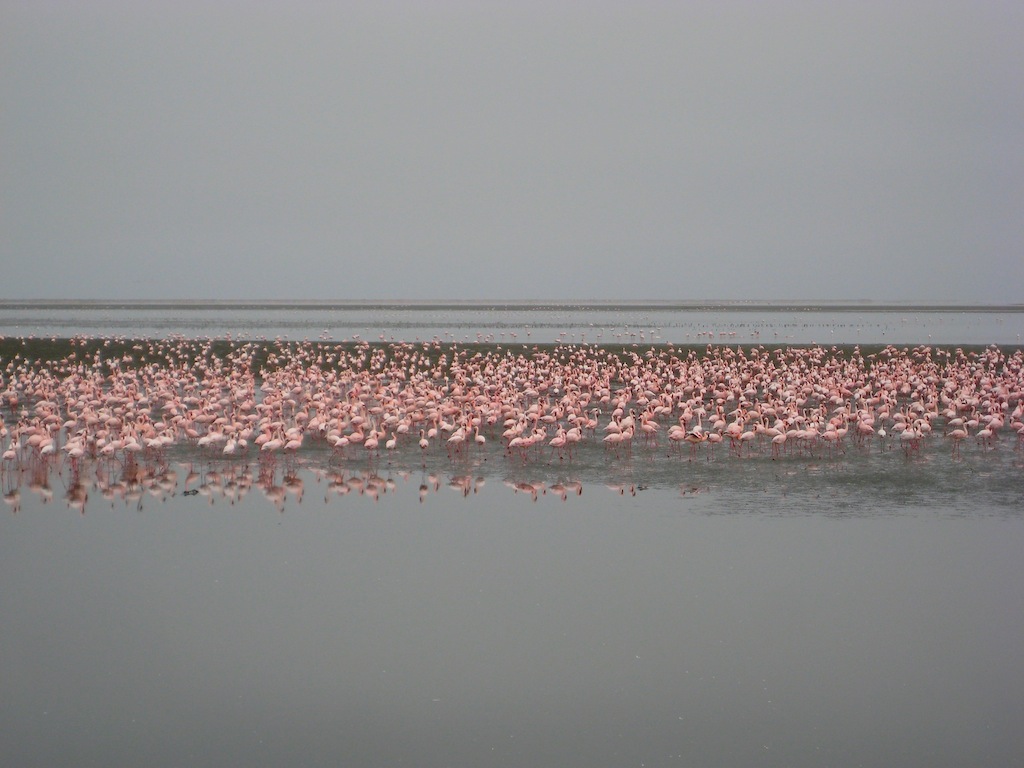 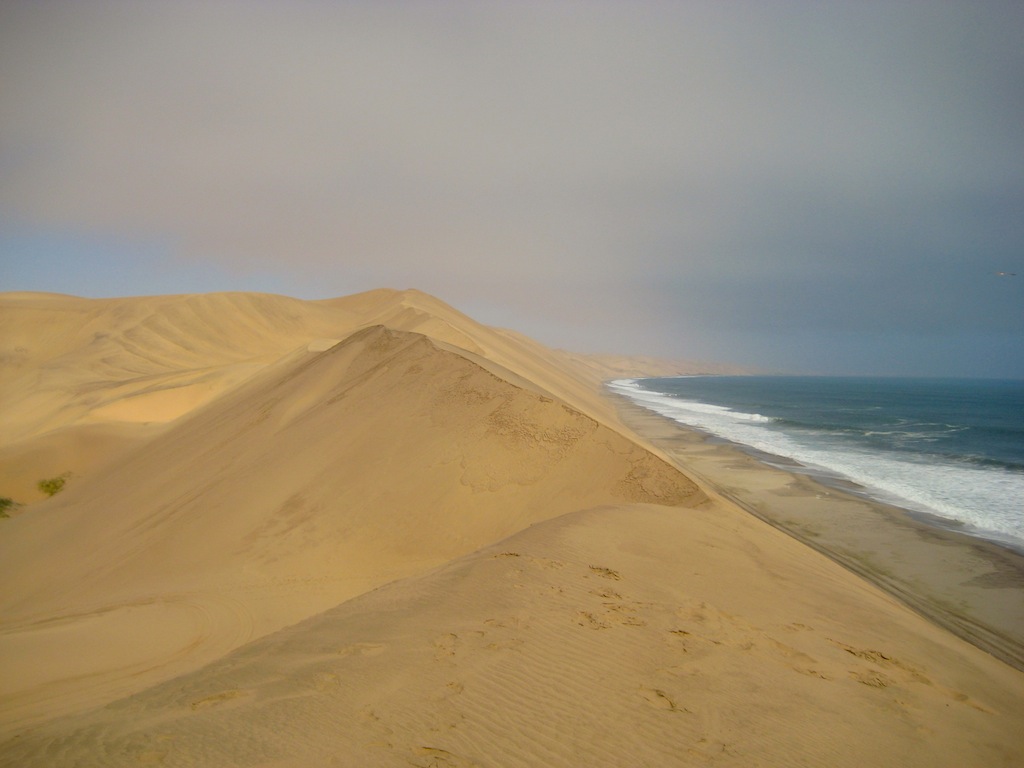 Sand Dunes outside of Walvis Bay

Walvis Bay is a fairly small, but busy industrial port. Most of the 60,000 residents work in the port area, but there is also a sizeable fishing fleet and a local operation that extracts salt from seawater. The first European visitors were Portuguese mariners seeking a way to the Indies in the late 15th century. Towards the end of the 19th century Namibia was annexed by Germany, except for the enclave of Walvis Bay, which was taken in 1878 by the British for the Cape Colony. In 1904, the Herero people (Bantu-speaking cattle herders) launched a rebellion, which was brutally put down. Diamonds were discovered east of Luderitz and the German authorities branded the area between Luderitz and the Orange River a forbidden area. German rule came to an end during World War I when German forces surrendered to a South African expeditionary army fighting for the Allies. South Africa was given mandate to rule the territory by the League of Nations. Although the mandate was renewed following World War II, the United Nations refused to sanction the outright annexation of the country to South Africa. In 1910, Walvis Bay became part of the Union of South Africa. South-West Africa and South Africa wrestled control of the area back and forth until 1990 when South-West Africa gained independence as Namibia. Walvis Bay was finally transferred to Namibia in 1994.

Our tour today took us to the Namib Dunes located just a short distance from the port of Walvis Bay. On our way to the dunes, we stopped at a large lagoon area just south of the port to see several varieties of Flamingos. Both white and pink in color, they must have numbered in the hundreds of thousands, spreading as far as the eye could see. Seeing the Flamingos flying through the air was spectacular, as the black accents on the underside of their wings showed so elegantly and distinctly.

The vehicles we took into the dunes were mostly Land Rovers with four-wheel drive and are able to navigate the sand dunes. Our group consisted of about seven cars, each with seven guests plus the driver who was also our guide. We roamed the dunes of golden sand so fine that any small breeze will pick up and carry the sand. Near the coast there are a variety of plants and insects that survive on the ocean air, fog and moisture from the sea. Once you get a half-mile away from the ocean very little plant life survives the heat of the desert and the dry conditions. It almost never rains in this part of the world. The sand dunes climb like mountains with one side being a gentle slope to the top with a sharp peak and falling dramatically down the back- side.

Along the way we stopped to see several dolphins swimming very near shore, ostrich’s, deer like springbok, dung beetles, and gecko like lizards. For lunch we stopped in a valley protected from the wind where a lunch was set up in fine fashion. Folding tables and canvas chairs, tablecloths, champagne, beer, oysters on the half shell, salads, calamari, fish, egg rolls, cheese, hardboiled eggs, and bread and butter were served. The lunch also gave us an opportunity to climb some of the sand dunes nearby.

The weather was very pleasant with cool temperatures in the morning warming in the afternoon, but never too hot. Two ladies in our vehicle were annoying as they screamed at every hill we climbed and talked non-stop, but this is life.

We returned to the ship in the late afternoon in time for the Biergartenfest served poolside. This authentic German Beirgartennfest, was a celebration of beer, food and life. Local German brewed beer was served along with pretzels, several types of bratwurst, roast pig, and several salads and many typical German desserts. A local German entertainment group performed both German and American songs. A German event may seem out of place here but not really. About 20 miles north of Walvis Bay is located the German town of Swakopmund, settled by Germans in 1892 and located on the Swakop River. The Germans built a jetty out into the water but never completed the dredging of the shallow harbor to make it suitable for shipping. This slice of Germany on the edge of the desert resembles a charming seaside Bavarian village resort. Today it is mostly a resort town.