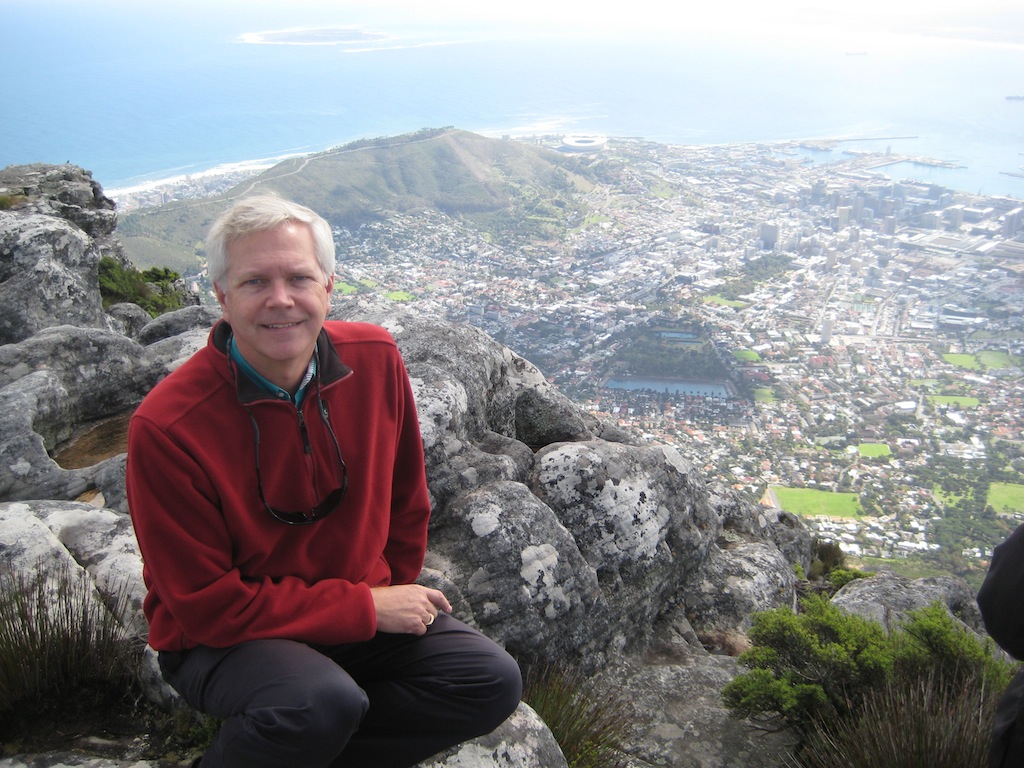 Once again our friend Bruno picked us up shore-side to take us up to the top of Table Mountain. We drove to the Lower Cableway Station located at 1,190 feet where we took the rotating cable car to the top of Table Mountain, a climb of more than 2,500 feet. Each cable car holds 65 people and is one of only three in the world including Palm Springs, CA and the Swiss Alps at Mount Titlis, that rotates while climbing. There are two sets of cable cars traveling about thirty-five feet per second, allowing them to transport 800 guests per hour. Once at the top of Table Mountain you can walk around the large plateau to enjoy incredible panoramic views over the bay, ocean, and city. Clouds often hang over the mountain creating what is called a tablecloth but on this morning we were able to see for miles with no obstruction from the clouds hovering above. It was not until we began our descent in the cable car that it began to rain lightly. The mountain is comprised of granite and sandstone but over time small grasses and blooming plants have grown out of the rocky surface, creating a beautiful park-like plateau. They say that there are 2,285 plant species growing on the mountain, which is a staggering number.

After descending the mountain on the cable car we took a drive over to another lower point of the city called Signal Hill overlooking the harbor. Just above Signal Hill is a taller peak called Lion’s Head for it resemblance to a lion. We then had a brief tour of downtown including the city hall, several churches, the convention center and many hotels and office towers. Much of this downtown area has been built on reclaimed land that was once a part of the harbor.

We had lunch back at the Victoria and Albert waterfront with Bruno before our all-aboard time of 3:00PM. The ship would not sail until nearly 6:00PM but immigration officials wanted to see each person individually to stamp passports before our departure and with over 1,000 guests this takes a bit of time. We also were required to have another emergency lifeboat drill prior to sailing due to the large number of new passengers onboard the vessel.

It was our tablemate, Gord’s, birthday yesterday so Kent had ordered a special chocolate bomb dessert to celebrate. The bombs are individual balls of ice cream dipped in melted chocolate that hardens when it comes in touch with the cold ice cream. This gives you a hard chocolate crust over the ice cream, which they decorated with chocolate mouse and a cherry on top.

The evening’s entertainment was Petrina Johnson, a star of the West End musicals Sunset Boulevard, Copacabana and Evita. She had a beautiful voice.