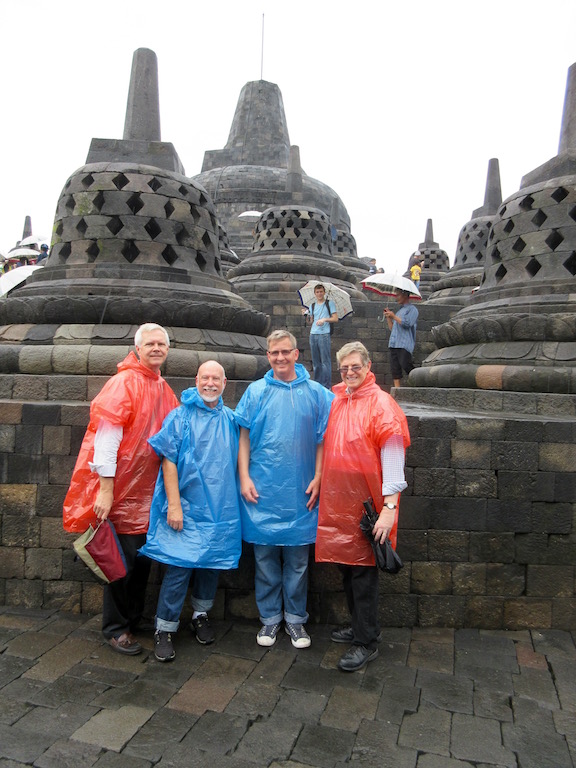 Borobudur with Robert and Dennis 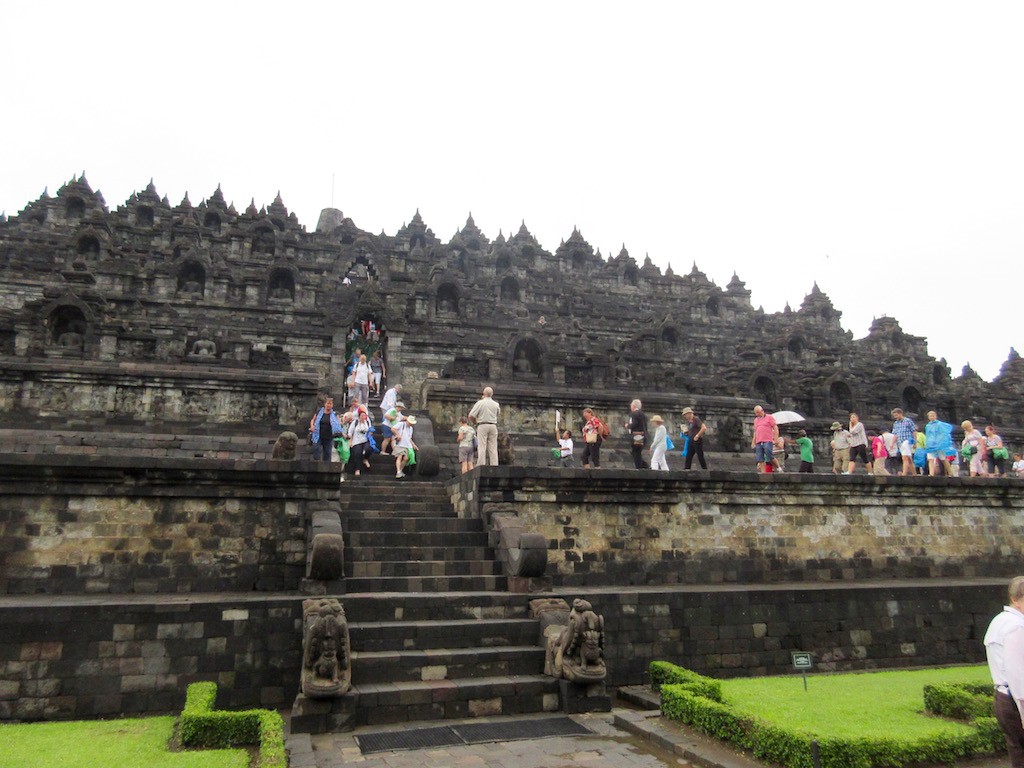 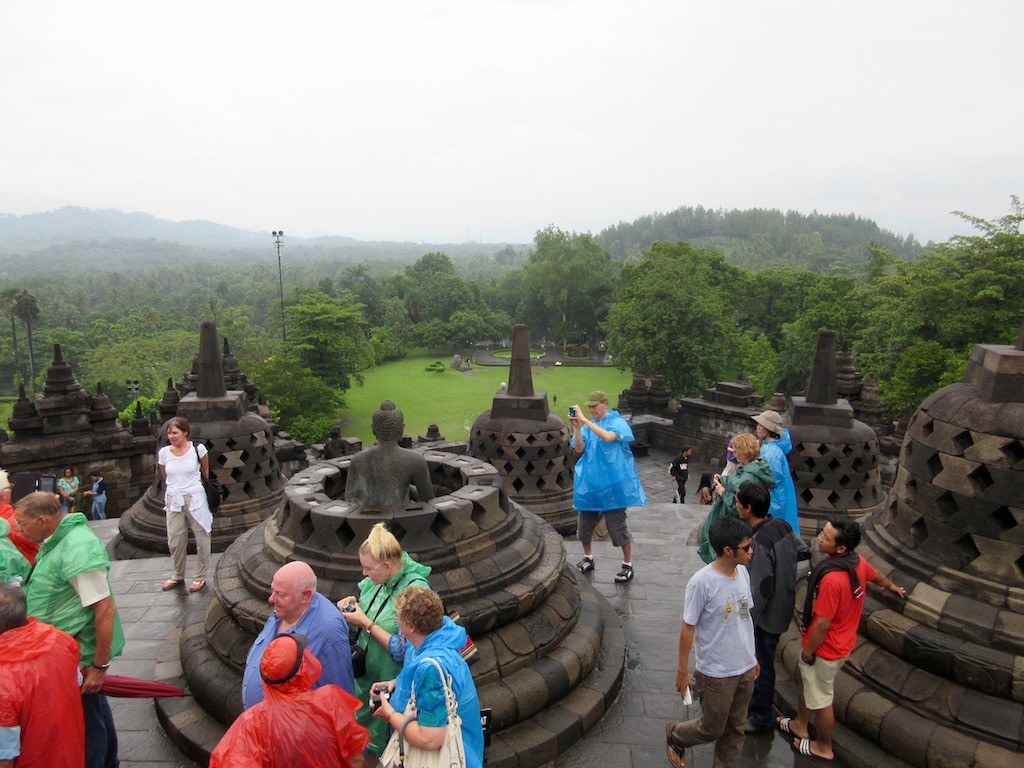 Semarang is located on the north shore of the island of Java and home to 2 million residents while another 4 million reside in the region. First inhabited by the Chinese in the 15th century, Java has played host to many occupants due to its strategic position along major trade routes. In the 18th century Semarang became a part of the Dutch East India Company.

Our tour took us to the Borobudur Temple located 56 miles south from Semarang. Even with the help of a police escort the travel time is about two-hours each way. We stopped in route at the Eva Café House for coffee and a snack of cashews, a sweet and a mini banana about four-inches in length. When we arrived at the temple we enjoyed a beautiful Javanese buffet lunch in the garden under a canopy. During lunch the skies opened up and it poured rain for an hour or so. Luckily it had mostly stopped by the time we began our walk up to the temple.

The Buddhist Kings of the Sailenra Dynasty, around the year 800, built the Borobudur Temple, possibly to enhance the image of Buddhism when Hinduism was growing in strength across the Indonesian archipelago. It is believed that it took more than 100 years to build the temple. It is the largest Buddhist Temple in the world, built with over two million stones. Shortly after its completion, the temple may have been abandoned when the Hindu Majapahit Empire overthrew the Sailenra Dynasty in 850. It lay buried in volcanic ash and vegetation for more than 1,000 years until Sir Stamford Raffles discovered it in 1814. Over the next century the temple was cleared and the process of restoring it began. Additional restorations were done between 1907 and 1911 and again from 1975 to 1982.

The temple is built on ten terraces, each level symbolizing a different stage of enlightenment or Nirvana and is covered in some of the finest examples of Buddhist reliefs in the world. At the top is the great stupa, surrounded by 72 smaller stupas and statues. From the top platform you are able to see the lush green landscape around. Our guide took us around the temple to explain some of the reliefs, carved into the stone, reflecting the teachings of Buddha. There were many school children at the temple who wanted to have their photo taken with us. I guess that it is unusual for them to see tourists—like us.

After exploring the temple, we were taken a short drive to see a demonstration of a Wayang shadow puppet show. The puppets were stick puppets traditionally made from the leather of a water buffalo. These traditional puppet shows may include hundreds of puppet characters and the performance may last for eight hours or more. A man telling an old epic story from India manipulated the puppets. As he tells the story he is accompanied by live music and a female singer who sings songs related to the female characters in the story. At this same stop they have a very large gift shop filled with traditional Javanese handicrafts. The crafts included many types of silver jewelry, silver figurines, woodcarving and some puppets.

The countryside is extremely lush, green and beautiful with rolling hills, rice paddies and terraces. The main roads are filled with many homes and shops selling everything from bananas and jackfruit to auto parts and gasoline. Most of these properties face directly on the street with little or no sidewalks and the streets are filled with motorcycles, cars, trucks and busses.

It rained on our return to the ship and there was much lightening in the dark skies. The streets in the port area were flooded from the heavy rains but we arrived back safely to the ship after a nine hour excursion.

The evening entertainment was a couple of young Japanese women who had graduated from the London academy of music. They played the violin and called themselves the String Idols. They were excellent musicians, however one of them had such a heavy accent you could hardly understand her English.