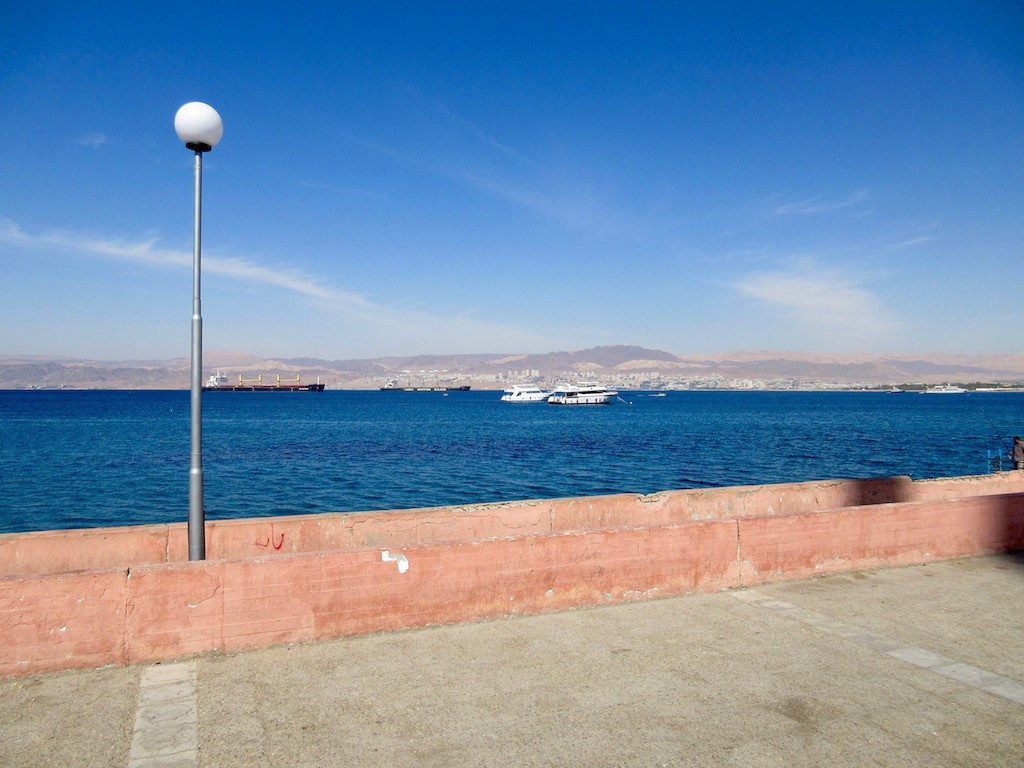 Aqaba, Jordan – Israel across the bay 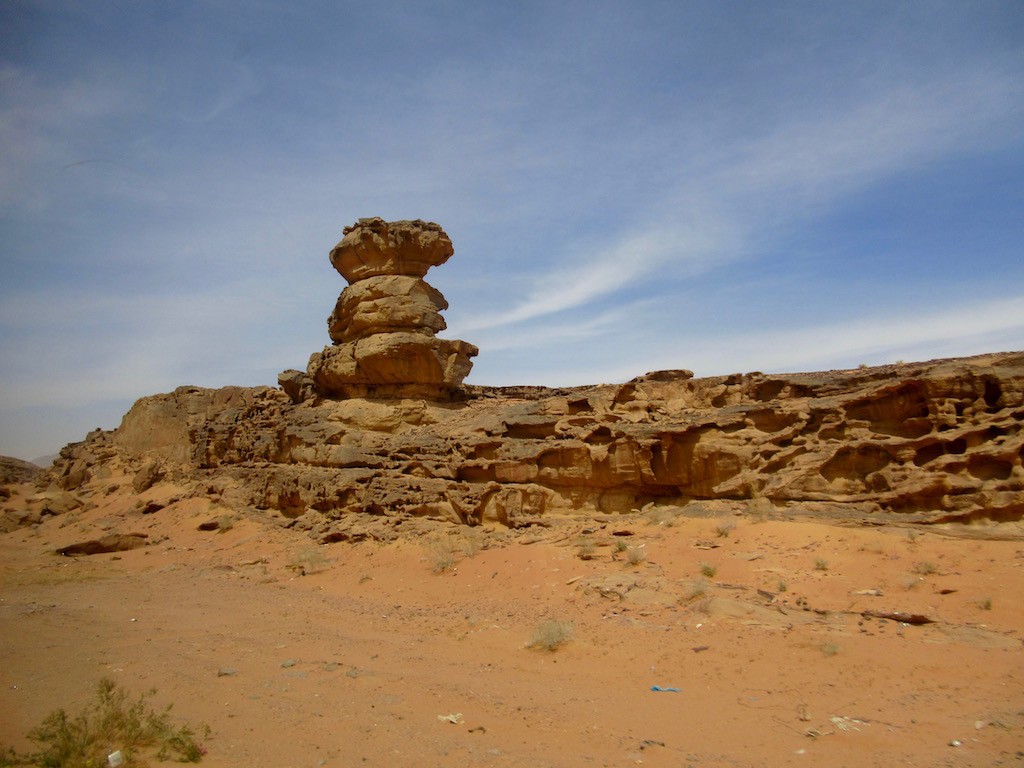 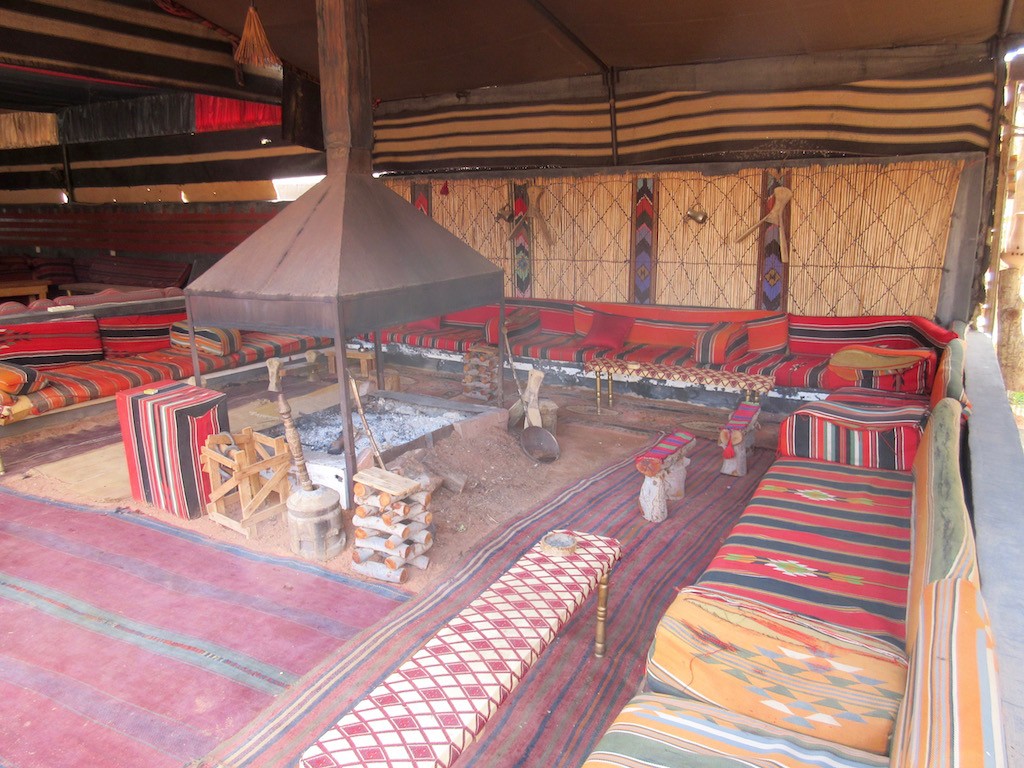 Our tour on this day was titled Aqaba Highlights and Wadi Rum Lunch. Our first stop was at the Aqaba Museum and Fort near the city center, built in the Mamluk era. At the museum we saw a collection of ceramics from all over the area, many of them showing both Egyptian and Chinese influences. We then drove through Aqaba where many new hotels are located as well as a large shopping area filled with everything from fruits and vegetables to butcher shops and handicrafts. In the heart of town near the Movenpick Hotel you can still see ruins of the old city of Ayla built here in the year 610 as a trading port between India and the Mediterranean. Portions of a church, the city walls and a mosque still remain. The city of Ayla succumbed to an earthquake and attacks by the Crusaders around 1116. It was then only a small fishing village until World War I when T.E. Lawrence, known as Lawrence of Arabia, along with local forces took the city from the Ottomans. On summer weekends, many Jordanians from Amman and other towns in the north retreat to Aqaba to escape the extreme heat.

We then drove south of town where the container port and an industrial area are located. Further south towards the Saudi Arabia border there is a very well developed waterfront called Marine Park with a boardwalk, beach umbrellas and white sandy beaches. In this area there are many hotel resorts and condominiums owned by foreigners from all over the world who come here to vacation. This area is popular for diving, snorkeling, swimming and water sports.

We then drove about an hour north and east to the area known as Wadi Rum or valley of the moon. Geologists believe that Wadi Rum was created by a great crack in the earth’s surface causing an enormous upheaval. Some of the ridges in this area are a thousand feet tall and are topped with rounded domed peaks worn smooth by the desert sand storms. This area has been inhabited since prehistoric times as is proven by scattered slabs of rock in the area with inscriptions of early Thamudic writings. Underground, enormous aquifers of fresh spring water have made this area a meeting center for nomadic caravans heading from Arabia to Palestine and Syria. This area has been used to shoot many films including Lawrence of Arabia. Today many Bedouin tribes live here and many have set up campsites for visiting tourists. The area is a government protected natural reserve.

The rock formations in this area are very dramatic in their shapes, red colors and rich textures. On this day there was a sand storm off in one direction filling the air with small particles of sand causing the landscapes to look as though they were in a sea of fog. It might remind you of a visit to the Grand Canyon although this area of Jordan is much larger and vast in size.

We had lunch at a modern day version of a Bedouin camp called Captain’s Desert Camp. This modern day camp had many small tents for rent by the night as a hotel, as well as community bathrooms and a large community tent for entertainment and dining. We enjoyed a buffet lunch of barbecued lamb and chicken, a variety of salads, fresh made bread, stuffed pita pockets, tea and cake. During our lunch they had a blind gentleman playing a local instrument similar to a guitar but with a very short neck. As he played, he would also sing some local songs but the sound was not very appealing to us and we just wished he would stop.

As we returned to Aqaba after lunch they dropped us in town where we explored the shopping area on foot. Kent stopped at a tourist office which recommended a Turkish bath house for a massage. The cost of a one-hour Turkish massage was only $35. While Mark was waiting on Kent to finish his massage, a Saudi man was inviting Mark to Saudi Arabia to his ranch where he breeds camels and horses. He claimed he was also in the petroleum business and wanted to give Mark his mobile phone number. Luckily Kent returned before Mark could be whisked off to Saudi Arabia for a visit.

About half of the people in Aqaba were dressed in western style clothing while the others were wearing local dress. The majority of the women were wearing something on their heads like a scarf. There are several beautiful mosques in town including one named after the late King Hussein.

The evening’s entertainment was another performance by Marco Romano of Italy. He sang a variety of songs from the classical to the modern and we thought he gave a better performance than his first show a few nights back.