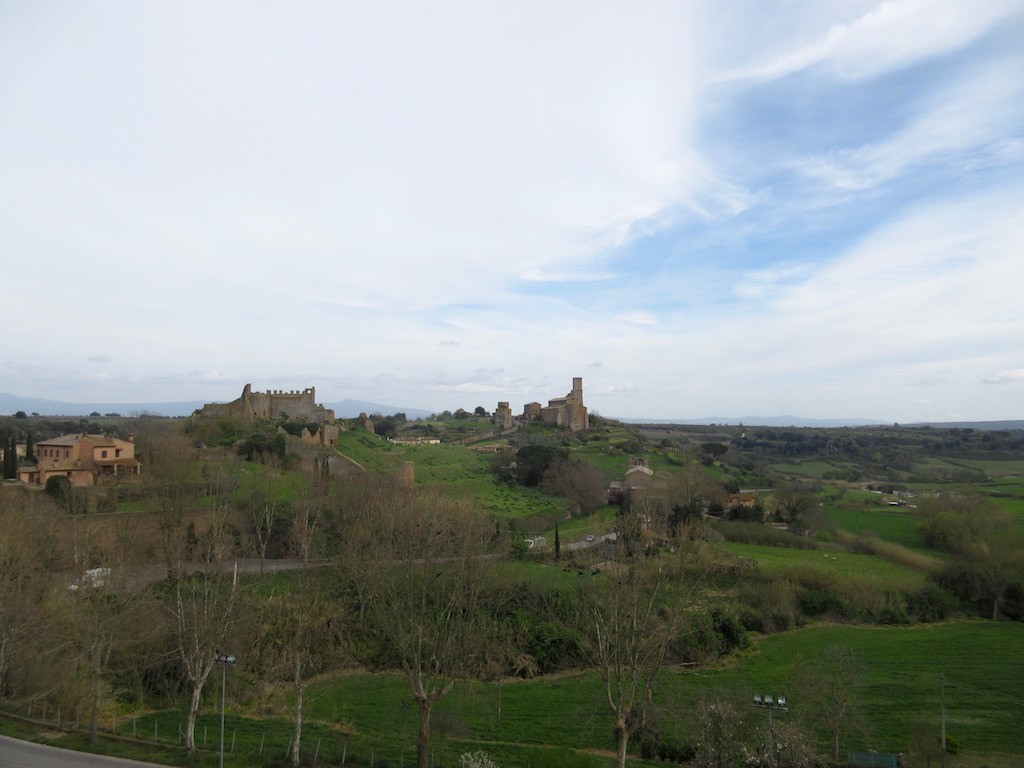 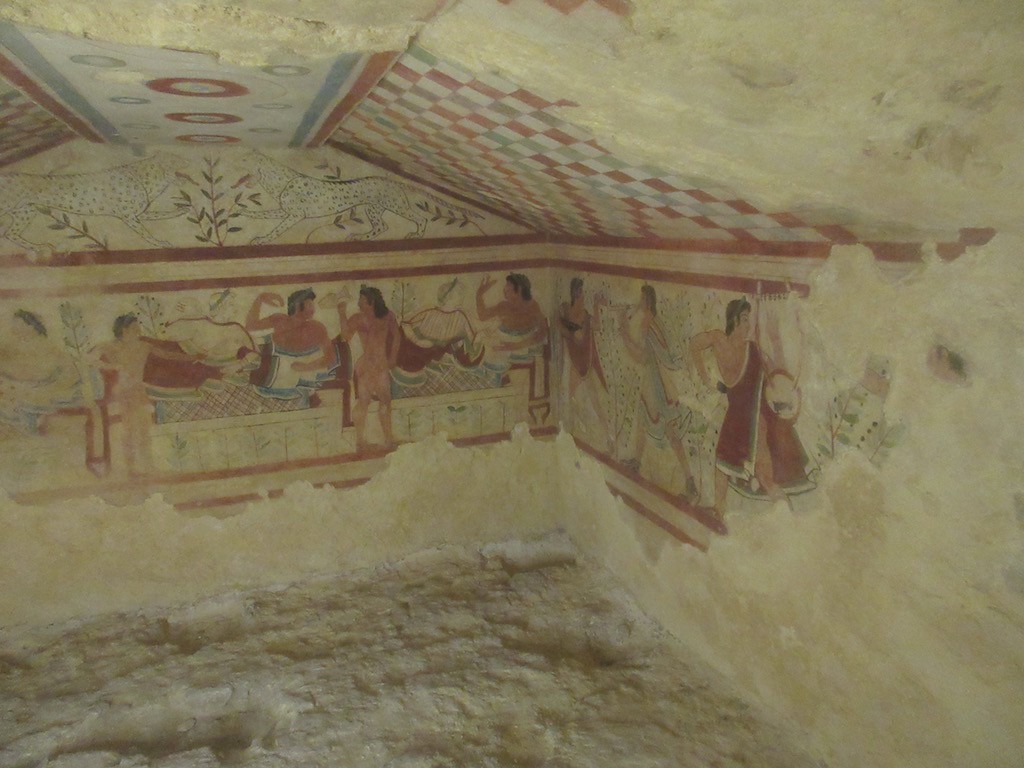 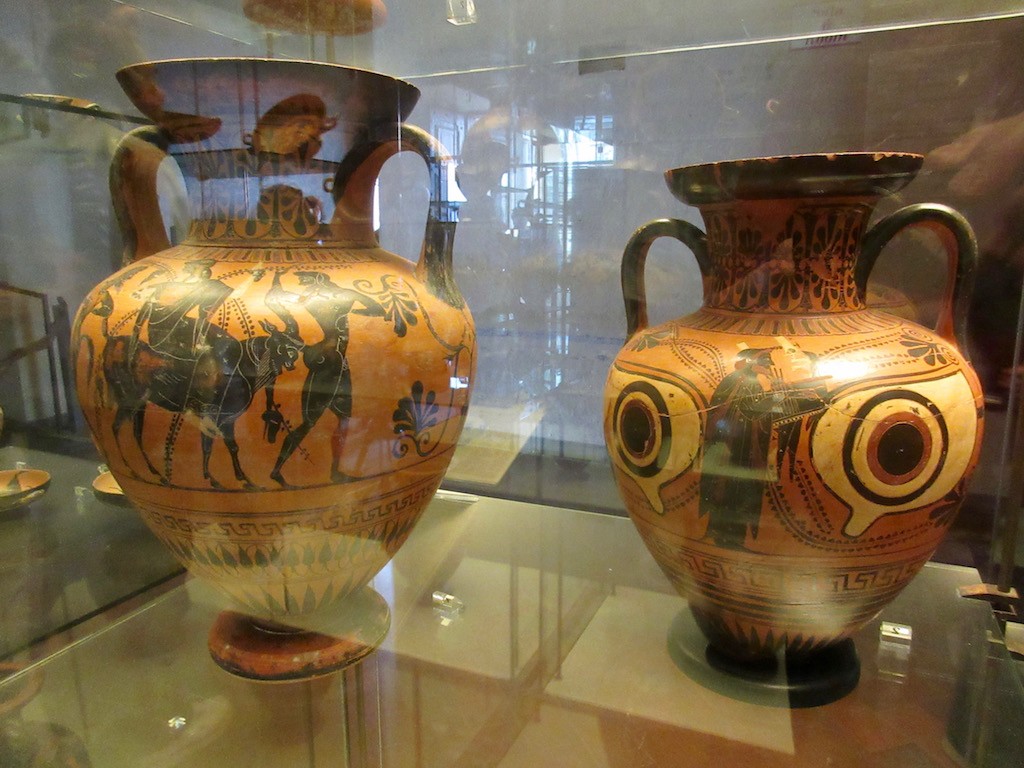 Civitavecchia is the gateway to Rome and is about 50 miles to the west of Rome. Many cruise ships and ferries from surrounding ports come in and out of here. Having been in Rome previously, we chose a tour titled Etruscan Treasures: Tarquinia and Tuscania. Our first stop was in the town of Tarquinia, founded in the 7th Century BC, about a thirty-minute drive from the port. We visited an ancient burial ground or necropolis containing thousands of tombs dating from the 6th to the 1st century BC, many of which have yet to be explored.

At the necropolis we were able to visit a number of tombs that have been excavated and turned into a museum of sorts. The tombs are rooms built underground to house the remains of the deceased. They believed that after they died they would need to live underground so they wanted to have whatever useful items they needed for the afterlife. Most of the tombs were rooms about twenty feet by twenty feet, elaborately decorated with murals on the walls. They have excavated and built enclosed staircases down to these rooms so that you can view them through a glass door to preserve them. The contents of the tombs have been removed to a local museum, so all that remains at this site is the room with the murals. These tombs would have been built by the living to include murals of things of interest to themselves. In some cases the murals contain angels and flowers while in other animals, hobbies or sexual acts are depicted. The colors in some of these tombs are vivid in color and still very well preserved, while others have faded or been damaged by water intrusion.

Also at this site we saw another type of tomb for those who had fewer financial means. These other tombs were round hollowed out stone bases about thirty inches in diameter with a large lid resembling a mushroom cap on top. These vaults would be filled with urns of the deceased’s ashes, jewelry, money or favorite possessions, before being sealed and buried underground.

Our next stop was the Palazzo Vitelleschi, an early renaissance home now converted into an archaeological museum housing the remains of the Etruscan population. This museum is located in the charming medieval town of Tarquinia. Inside the museum we saw all types of stone tombs, burial urns, and artifacts found inside some of these tombs. The urns were elaborately decorated while other items included gold or metal coins, jewelry, figurines and more.

We then headed to Lake Bolsenae for a traditional Italian lunch including a salad, lasagna, tiramisu, wine and espresso. The restaurant was called La Pirata and had a commanding view out over this gorgeous and vast volcano-made lake. The lake is fed by rainwater and on its shores are forests of oak and chestnut trees as well as farms growing olives, grapes and vegetables. The lunch was not so spectacular but the setting was beautiful. Kent had two pieces of tiramisu!

After lunch we headed to Tuscania village located on a nearby plateau above the River Marta. This is one of the oldest villages in Italy and was the cradle of the Etruscan civilization from 900 to 700 BC. We took a walking tour through the old medieval village to admire the architecture including two Paleo-Christian basilicas from the 9th century. The village, including the ancient walls, is well preserved and it was a treat to have a chance to visit.

Back onboard, we enjoyed a special show this evening by the ships violinist and pianist who perform nightly in the Explorer’s lounge. Also performing was one of the Rotterdam singers named Laura McCulloch and her boyfriend Alex Gates who is the bass player in the Rotterdam Band. Laura sang songs from her favorite stage and screen shows. It was their first solo show and they were a bit nervous but they did a nice job.