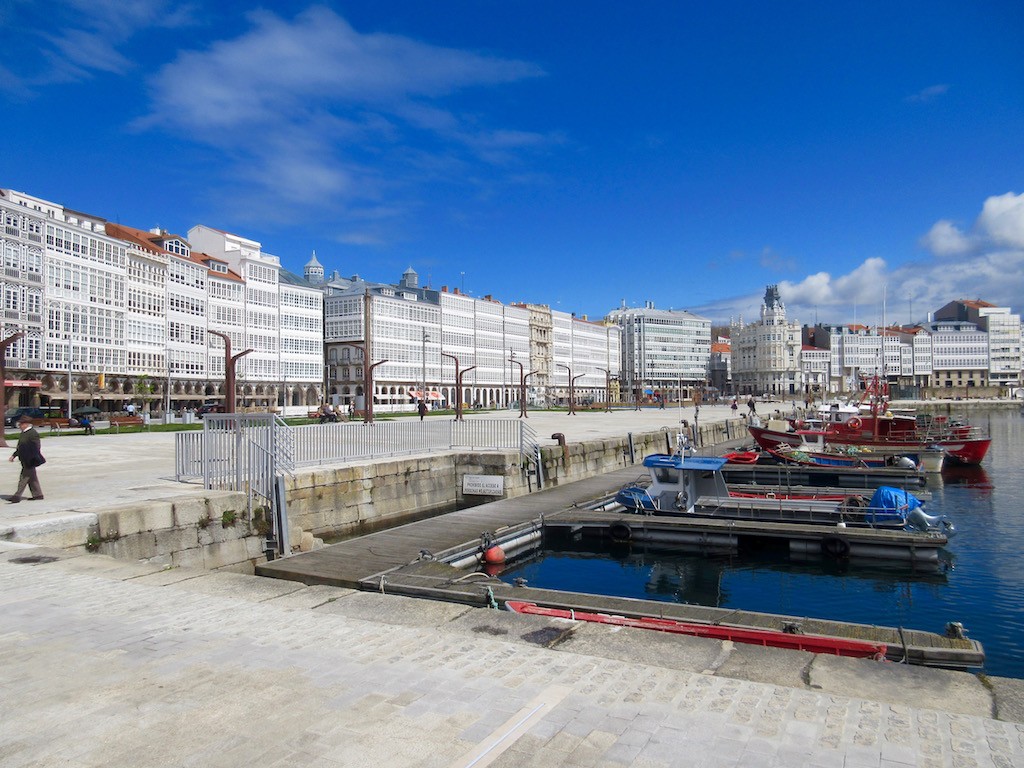 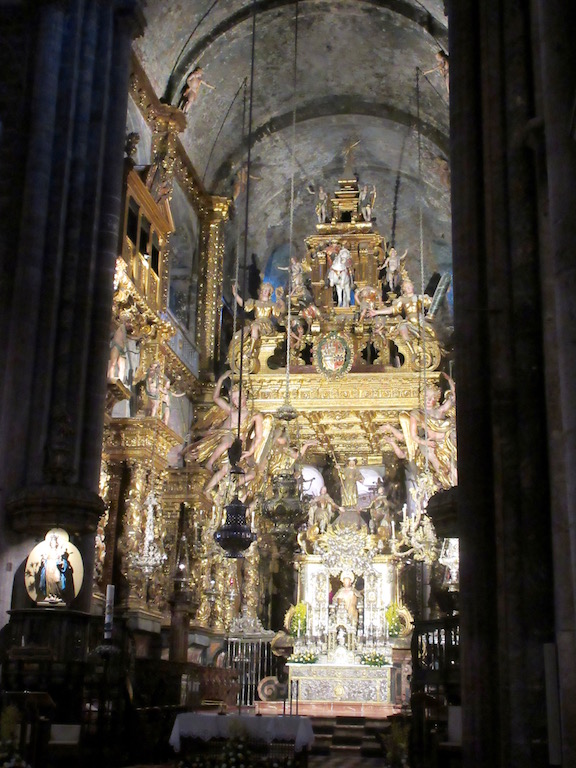 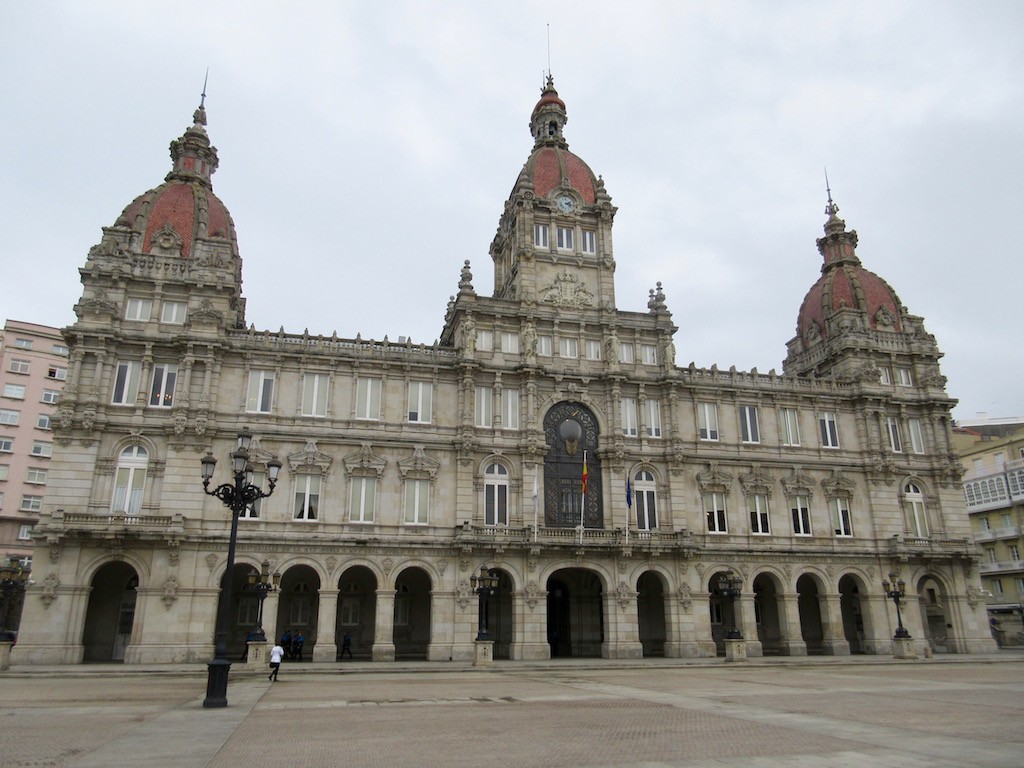 A Coruna, with a population of 275,000, is located at the northwest corner of Spain on the Atlantic Ocean. This port provides a distribution point for agricultural goods from the region. The manufacture of clothing and textiles is also an important piece of the local economy. The company Zara is located and started here; the owner is now the richest man in Spain and one of the richest in the world.

The weather was cold and rainy, but we were not going to let that dampen our spirits. Our tour this morning was titled Santiago de Compostela Highlights. The drive to the town of Santiago took about one hour through beautiful countryside. They grow a lot of eucalyptus trees here used for making paper.

Once we arrived in the town of Santiago, we made our way to the main square called Obradoiro Square. Here you have a magnificent view of the Cathedral Santiago de Compostela, the Town Hall, the Palace of Saint Jerome and a 15th century Hotel of the Catholic Kings. The square itself is paved in stone with no flowers, no fountain and no ornamentation of any kind. On the other hand, the cathedral and the surrounding buildings more than make up for the lack of ornamentation.

This cathedral is a place of pilgrimage because as the story goes, St James the apostle’s remains are entombed here. The apostle was beheaded in Palestine and some of his disciples brought his body back to Spain where he had once taught the word of God. They thought that this was where he would have wanted to be buried. Over time his remains were lost until one night a farmer found them in the light of the moon known in Spanish as the Compostela. When the Apostle’s bones were found, a small chapel was built in his honor and it was enlarged several times over the years until it became an enormous cathedral. The west face of the cathedral shows the apostle James (Santiago) as a pilgrim, as well as a representation of the urn where the remains of the Apostle appeared. This main entrance was currently undergoing restoration and was mostly hidden behind scaffolding. On the north side of the cathedral is the Plaza de Azabacheria and a neoclassical façade. To the south is the Silversmith’s Square where during the middle ages silversmiths had their smithies. This south side of the cathedral is decorated in Romanesque style. On the east side is the Jubilee Door on the La Quintana Square. This door is usually only used during a year when St. James’ birthday falls on a Sunday and this is where pardons are dispensed. However this year the door is open due to a request of the Pope that all churches should be open to the people this year. During the summer months, many Christians make a pilgrimage to this historic site walking or biking a minimum of 100 kilometers on foot or 200 kilometers on wheels. Others have been known to make the entire journey that St James’ body took walking for up to two and a half months from France, primarily.

Inside this massive church there is a very ornate altar complete with a large bust of St James. There is a rear stairwell where you can climb up to the rear of St James bust in silver and give him a hug. Below the altar you can take another set of stairs down to a crypt where we found a large silver box containing the remains of St James. Around the perimeter of the church there are many small chapels with ornate decorative altars of all types. Most of these are locked behind iron gates to protect them. The alar itself is several stories tall with lots of gold, horses, cherubs and angels. It has so many different things going on with it, that it is hard to make sense of it when you sit and look at it. So much for the old saying that less is more.

After our visit inside the cathedral we headed back to the Hotel of the Catholic Kings for refreshments. The hotel is a beautiful five star hotel built during the reign of Isabella and Ferdinand with a blend of Renaissance, Baroque and Gothic styles gracing its rich interior. There is a lovely central courtyard with a fountain filled with fresh rose petals. Wide hallways surround the courtyard, lushly furnished with sofas, chairs, carpets and paintings. A regular room can run you in the neighborhood of 500 Euros a night during season.

We had our tour refreshments in a third floor Hotel reception room where we were served wine, cheese, small tuna-filled sandwiches, croquettes of some type, ham and a potato quiche–like tapas. During our visit we were treated to the singing of a group of young men called Tuna singers. They were dressed in a type of medieval Spanish-style costumes. They had on black velvet pants and long decorative capes or robes.

After returning to the port we had a bit of time to explore the town of A Coruna, located in the municipality of Galicia. Our ship was docked at the edge of town so it was an easy walk into the charming historical district, once an ancient walled Roman city. Today the meandering streets house many shops and businesses, many with homes above. We visited a large main square dedicated to Maria Pita, who defended the city against attack in 1589. We stopped at a former castle, converted into a garden in the 18th century, which is home to the tomb of Sir John Moore. Many of the streets house museums, convents and monasteries in old historic buildings as well. Along the waterfront there is one structure after the next with glass-faced sides, flat from top to bottom and with many white mullions. The buildings are so crisp and clean in appearance that it makes you think that they are modern construction. These unique buildings have given the city the nickname of “the crystal city.” There is also a modern, wide pedestrian-friendly promenade stretching along the harbor and ocean perfect for a stroll or biking. Along the way you find many benches, sculptures and even an old castle that houses an archeological museum.

The entertainment this night was a young 27-year-old pianist by the name of David Schofield. David grew up in Manchester, England where he learned to play the piano before being shipped to London and Chicago to boarding schools where he studied piano for the next nine years. When David was only nineteen-years-old he won a music competition at Carnegie Hall and since then he has been performing all over the world at concert halls and aboard cruise ships. He gave a very entertaining concert with a wide range of music choices. We had seen him on the world cruise in 2013 as well.