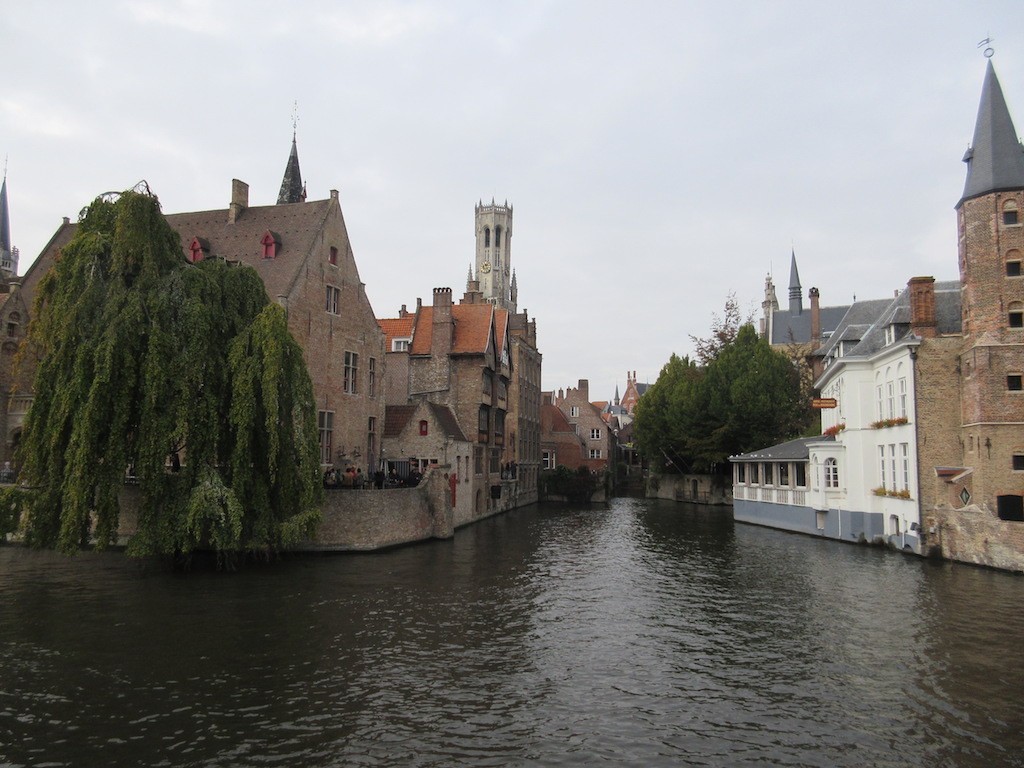 This morning we arrived in Brussels at 9:15am local time before we were taken by bus to the town of Bruges located about 65 miles away. The drive took us through beautiful countryside where the fall leaves are beginning to turn. We saw many corn fields, horses, cattle and sheep.

Belgium is located on the North Sea surrounded by the Netherlands and Germany on the east, France on the west and Luxembourg on the south. Belgium has a population of about 11,000,000 inhabitants. Because of its proximity to these other nations, 60% of the population speak Dutch while the other 40% speak French.

The name Bruges is derived from the Old Dutch word meaning bridge. Bruges is the capital and the largest city of the province of West Flanders in the Flemish Region of Belgium, in the northwest of the country. Bruges has a population of about 125,000 people and is a canal-based city similar to Amsterdam and Stockholm. Some refer to it as the Venice of the north. Due to its port it has significant economic importance and was once the chief commercial city of the world.

The historic center of Bruges is a UNESCO World Heritage Site created to protect the city with the best preserved historic medieval architecture. The most famous landmark is its 13th Century belfry housing 48 bells. The city still employs a full-time carillonneur, who gives free concerts on a regular basis. The Belfry tower stands some 272 feet high and is accessible for the public to walk up the tower’s 366 steps to the top.

Our hotel for two nights is the Oud Huis de Peellaert located just a couple of blocks from the main market square in the center of town. This 50 room historic hotel was created from two 19th century buildings built in the empire and classical style.

We were taken on a short walking tour around the heart of this historic city by our city host before exploring on our own for the remainder of the afternoon. Meandering cobblestone streets lined with beautiful stone and brick buildings line the streets. There are many chocolate shops, restaurants and stylish fashion shops. We stopped at a local hotel’s tea room for some croquettes for lunch.

In the early evening we had a welcome drink with the city host and the 38 of us who are on the pre-river cruise extension to Bruges. By 8:30pm we were exhausted and turned in for the night without having dinner.