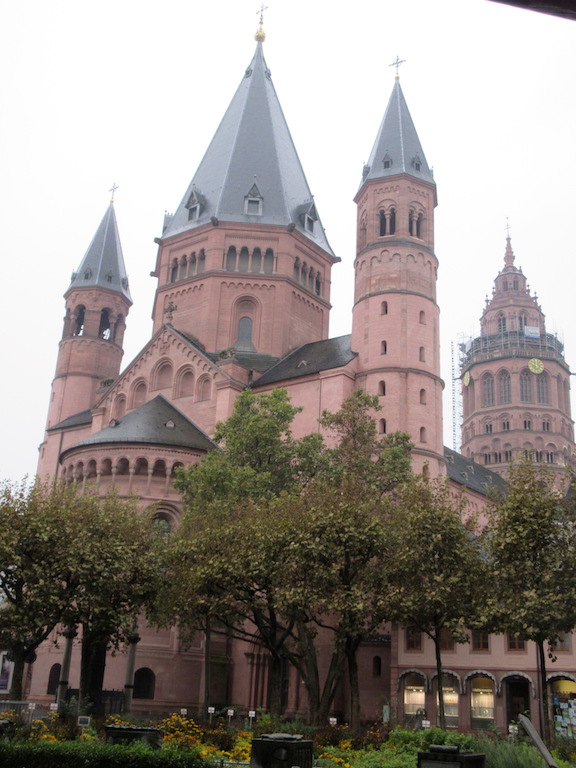 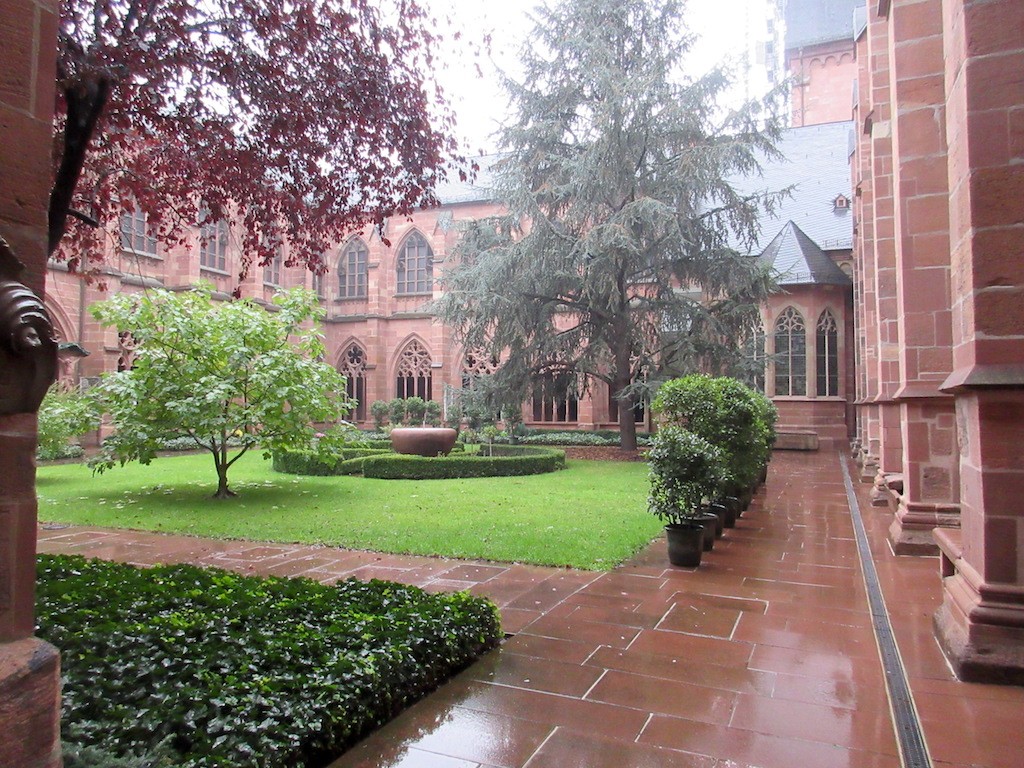 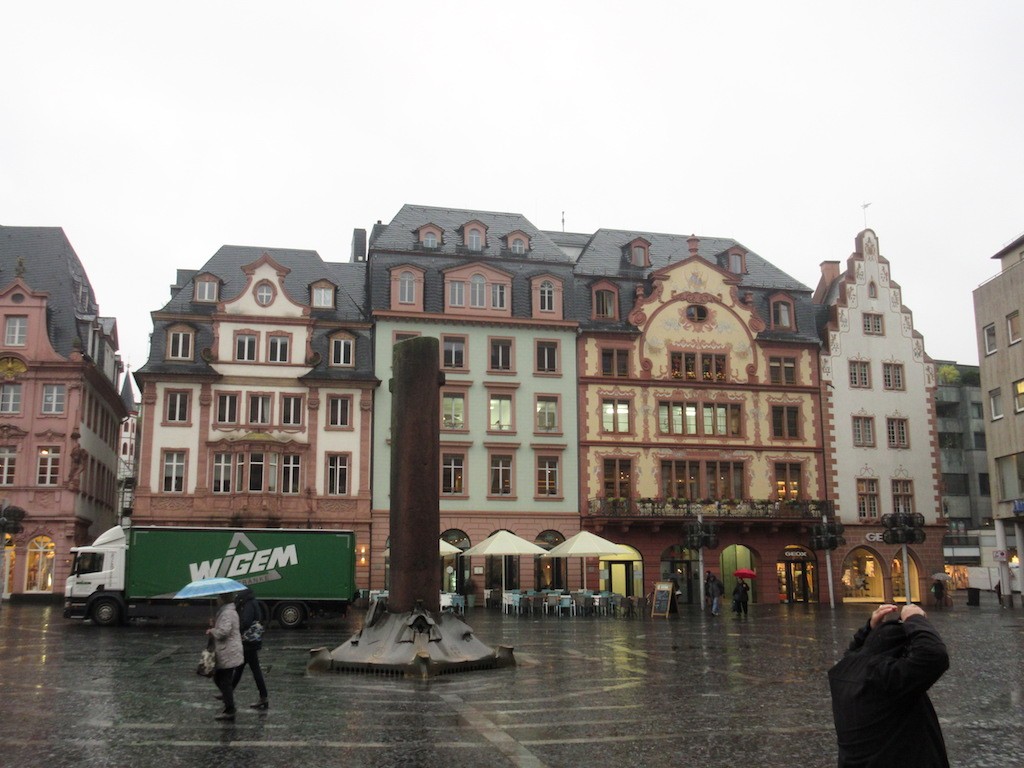 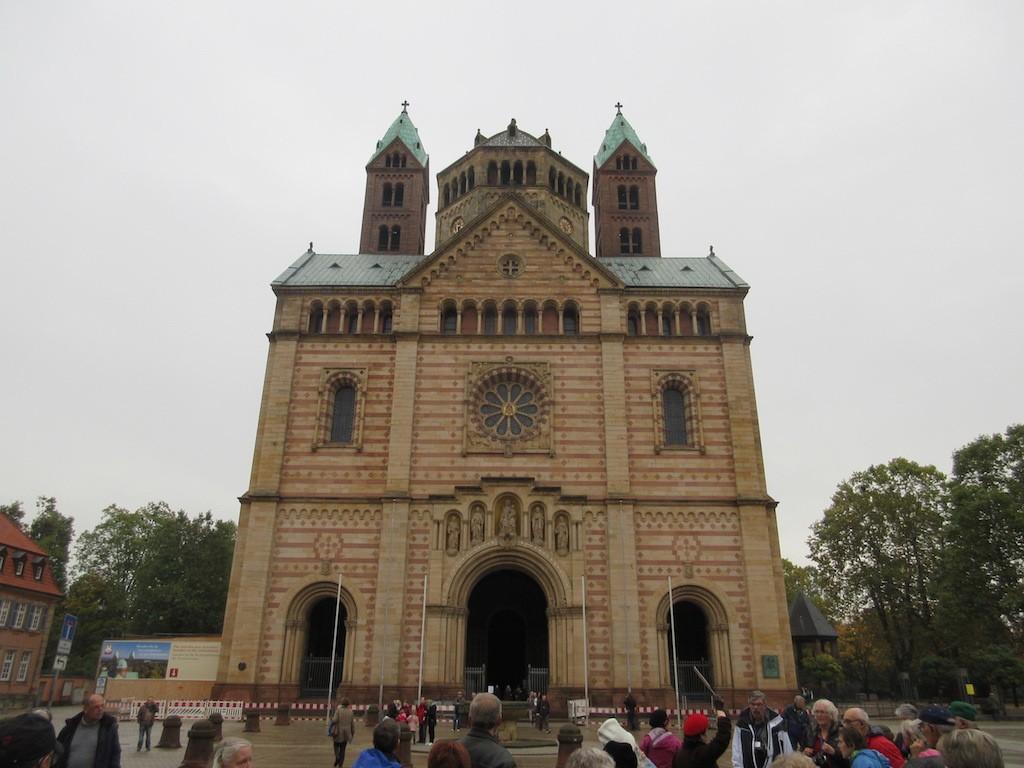 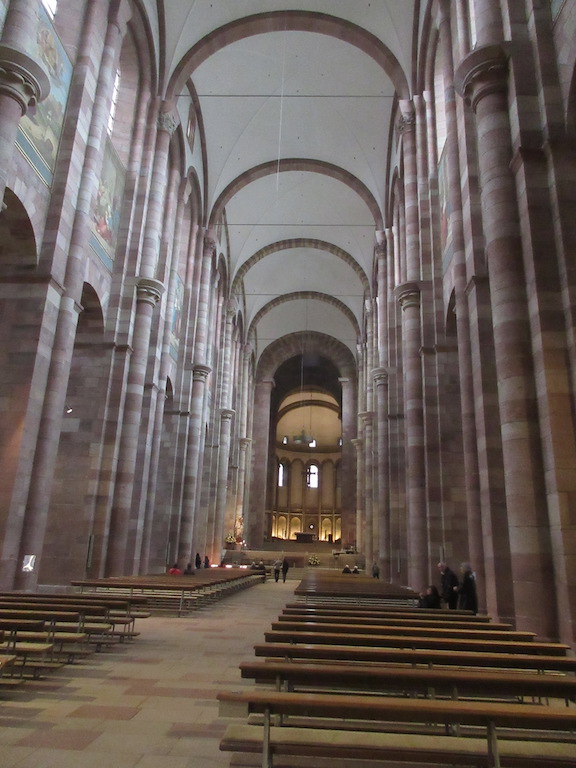 The weather was not cooperating on this day and we had a morning filled with rain showers. We started out the day with a walking tour around the city center. Mainz with a population of 225,000 is famous as the home of the invention of the moveable-type printing press by Johannes Gutenberg in the early 1450’s. We visited the Gutenberg Museum where we saw first hand how the printing was done with this new invention, the moveable-type. The first books using movable type were manufactured in Mainz. The museum has several original Gutenberg bibles, printed in Latin, now extremely rare and valuable. They keep them locked under glass and in a vault similar to one you might find in a bank.

The city has meandering streets which make it difficult to get your bearings on which direction you are traveling. Much of the city had been destroyed during the WWII but many of the old buildings have been restored or rebuilt in their original style. Mixed in with those are buildings from the 1950’s and 1960’s, which appear quite stark next to the ornateness of the classical architecture.

Included on our tour was a visit to the city’s cathedral started by Archbishop Willigis in the year 975. It was not completed until 1009. Like so many of these very old churches they have been partially destroyed and re-built numerous times resulting in an eclectic mix of styles and art. This church has a beautiful outdoor cloister, a huge main sanctuary, many side altars, a chapel and a crypt in the basement. Much of the art work and statues inside the sanctuary are extremely ornate.

Although Mainz is not that large, it is part of the Rhein Metro area comprising 5.8 million people and located just a 25-minute train ride from the Frankfurt Airport.

After lunch onboard the ship, we headed out on an optional tour to the town of Speyer where we saw another enormous cathedral. The Speyer Cathedral is known for having the largest Romanesque crypt in the world, built in the form of a hall. The crypt was consecrated in 1041 and is more than 100 feet wide, 150 feet long and nearly 25 feet in height. It contains many bone and other relics. The main sanctuary is enormous in size, but a bit simpler and understated in comparison to some of the others we have seen.

We then headed to the Jewish baths. Speyer was home to one of the most important medieval Jewish community’s north of the Alps. In the 11th Century, Jewish merchants, and bankers came to Speyer from Italy and France. The Jewish people coexisted peacefully with the Christians until the 14th Century when, for some unknown reason, there was an anti Jewish sentiment leading to the extinction of the Jewish community in Speyer.

In recent years a Jewish ritual bath built around 1120 was excavated and is part of a small Jewish museum. The baths are entered through a staircase down about thirty-five feet underground to where you find the pool of water. They still show the bath with water in it today. It was quite interesting. Several headstones from an old local Jewish cemetery are also housed in this small museum.

After dinner there was no entertainment provided by the ship. We retired to our room and read, responded to emails and rested.