Our Lady of Charity 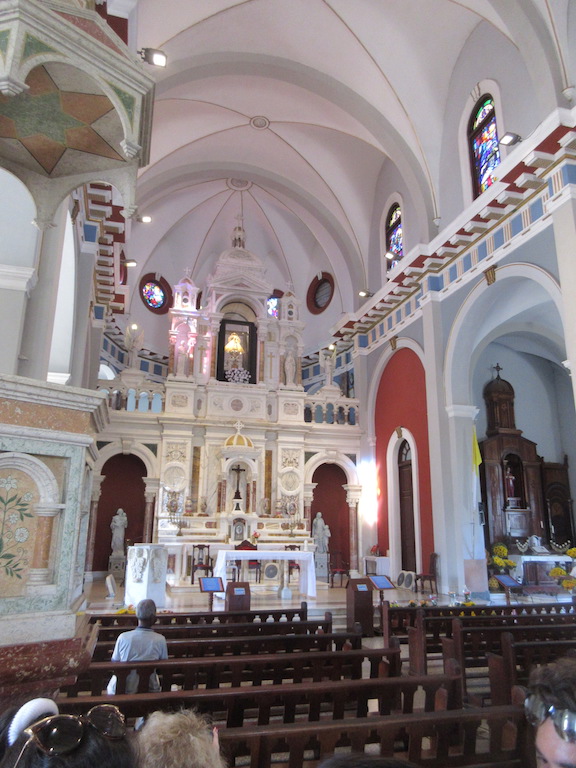 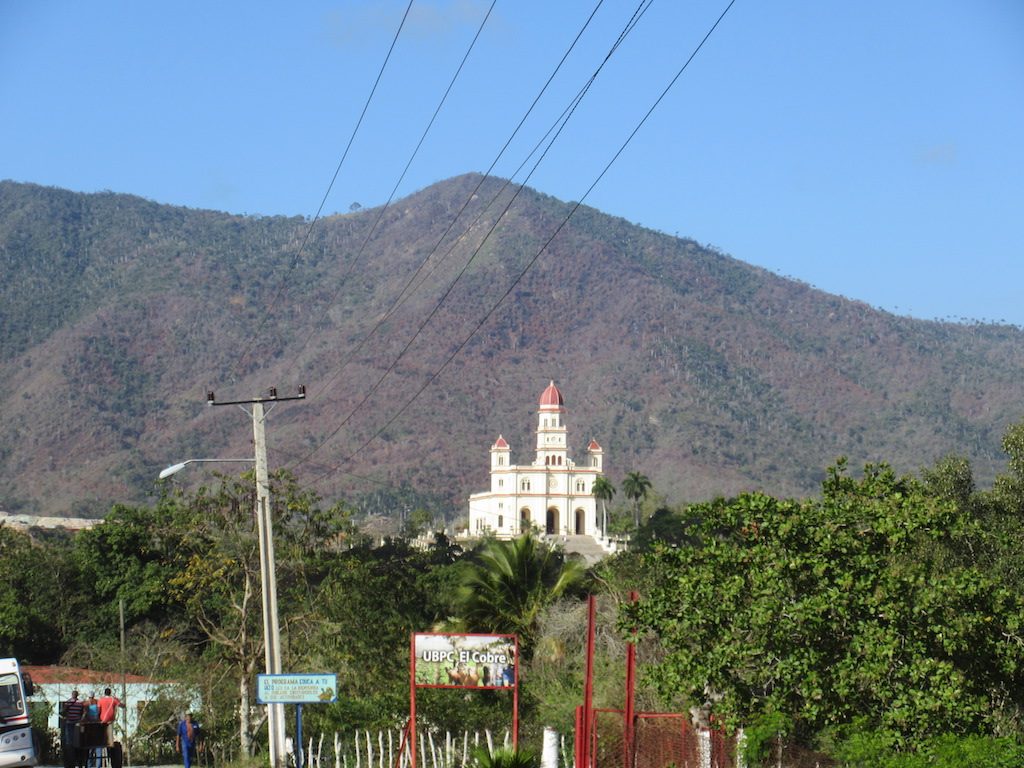 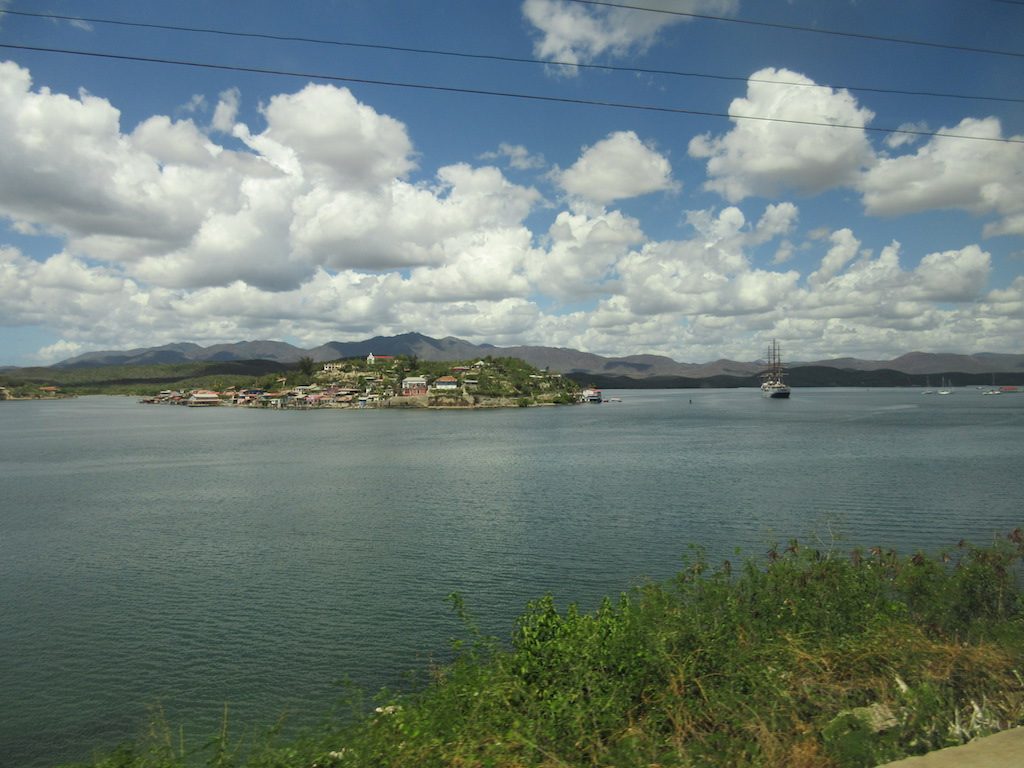 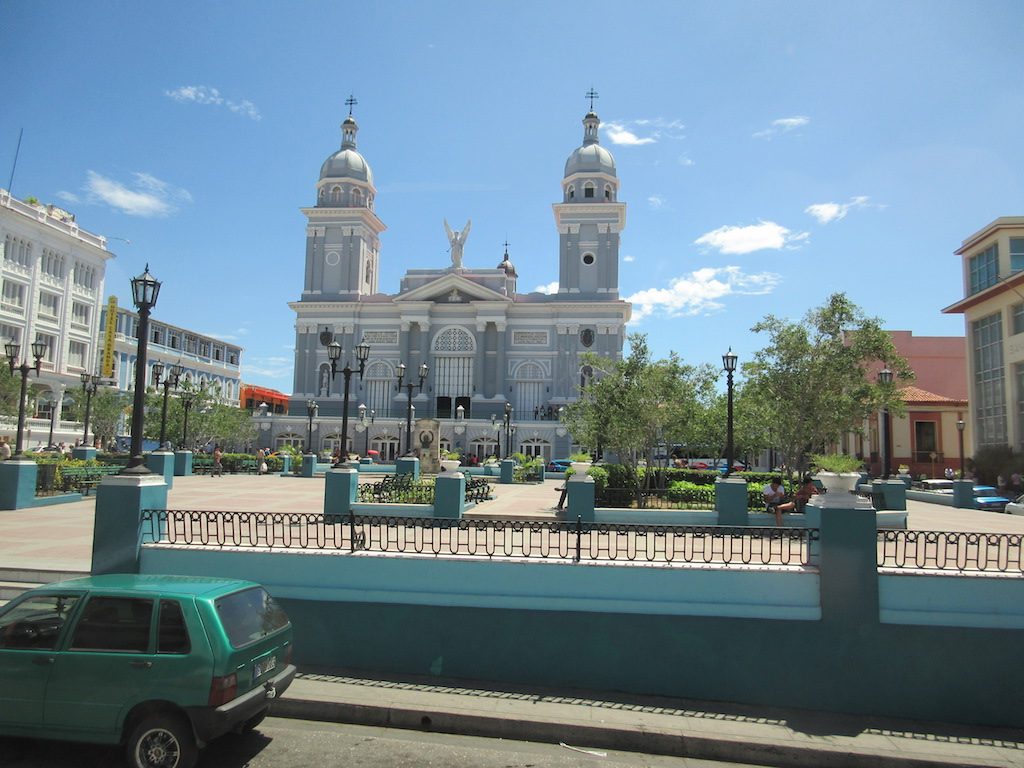 We took an excursion to an old copper mining town called El Cobre that was once worked by slaves and free colored people starting in 1532. In 1670 the Spanish Crown had confiscated the mine and 270 private slaves became property of the king. That was not the purpose of our trip, but a little about the history of the town.

Cubans of all walks of life make pilgrimage to the La Caridad del Cobre Church in El Cobre to pray at the tiny statue of Cuba’s patron saint, Our Lady of Charity. The story is told that along the northern shore of Cuba near Holguin in the late 1600’s,  two fishermen, and a young boy who was a freed slave, found a statue floating on a piece of wood in the ocean. On the piece of wood was written that the statue was of Our Lady of Charity. The Cuban statue measures just 16 inches tall, with a head of baked clay covered with a polished coat of fine white powder. Her feet rest upon a brilliant moon, while angels spread their golden wings on a silver cloud. This church was erected in her honor and today it is a beautiful church in excellent condition.

After our visit to the church we stopped in Santiago at the Revolution Square where we saw a large statue of General Maceo riding a horse and huge beams of steels resembling machetes pointing into the air. The statue and daggers are atop a museum which is covered in steps made of local green marble. General Maceo is highly revered in Cuba for his fight for independence.  He was wounded in battle some 32 times.

Next we made our way back to the bay of Santiago near where we had visited the castle yesterday. We boarded a small motor boat to take us a short five-minute ride to Granma Island (Cayo Granma) in the middle of the bay. Once on the island we visited a restaurant where we heard from a local fisherman and two students, an 10-year-old boy and a 11-year-old girl. The kids are part of a group of more than 100 kids on the island that participate in a local program where they get tutoring from older residents. The tutoring focuses on cleaning up the island, keeping young women from getting pregnant, doing well in school and recycling old trash. We were each given a piece of art the kids had created out of recycled items like vitamin bottles, medication bottles, deodorant containers, wire, string and plastics. The art pieces were hanging ornaments of funny characters decorated in a vast number of ways from recycled materials. They give these to the visitors and ask the visitors to take photos of the characters all around the world when they arrive home and send them photos. They showed us many photos of their handicrafts from all around the world.

The address to send photos to the kids showing off their toys made from recycled materials is: Pedro E. Torres Sorio, La Sorapo, Calle Principal #8, Santiago de Cuba.

We then had lunch at the restaurant on a wonderful covered patio with a great cool breeze overlooking the bay. It was a wonderful setting for a lunch and the weather was sunny and beautiful. We were served battered and fried fish bites as an appetizer, a salad of cabbage, tomatoes and cucumbers, a white fish with shrimp, tomato sauce and cheese on top and ice cream for dessert.

We had some free time to explore the church and neighboring shopping streets on our own. The interior of the church has also been meticulously restored and has been painted with bright colors. The traffic is busy in the center of town and the exhaust from the trucks, cars and motorcycles is a bit overwhelming. There is a pedestrian only shopping street nearby which was filled with all sorts of locals and tourists wandering. Many of the local shops and businesses had lines of people waiting outside to get in. Not sure if they only allow a certain number of customers in at a time or if they had just not re-opened after lunch.

Our final stop of the day was at an old Bacardi Rum factory store that sold many types of rum and many varieties of cigars. The shop was smaller in size but they had some local musicians playing and there were tables and chairs where you could sit down. Lots of the people in our group took this opportunity to buy cigars as gifts for friend’s back home. The cigars are fairly expensive at about $6 a piece and up depending on the brand, size and volume that you purchase.

For dinner we were on our own, although many of us chose to visit our local tour guide Jesus’ family restaurant which was only about three blocks away form our hotel. His family runs a local paladar and we thought this would be a safer option than heading out on our own to find something for dinner. They were serving a pumpkin and taro soup, chicken dishes, pork dishes, and a variety of seafood like fish, shrimp and lobster. Everything was very good but something did not agree with Kent’s stomach.