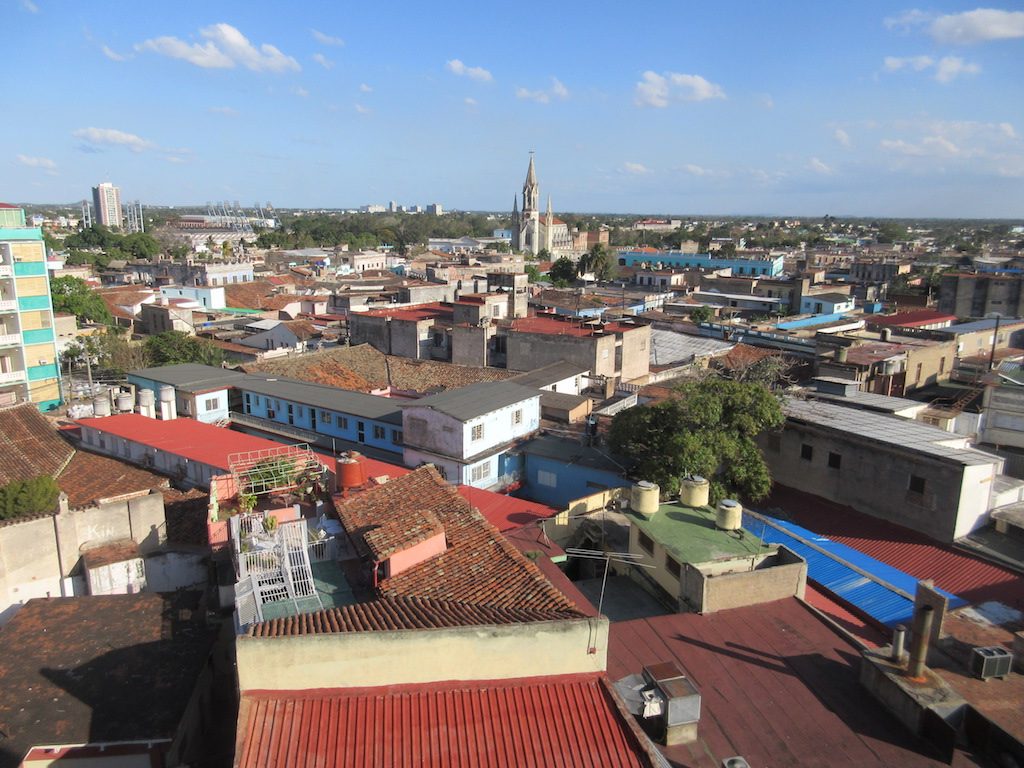 Views from the rooftop of the Gran Hotel Camaguey 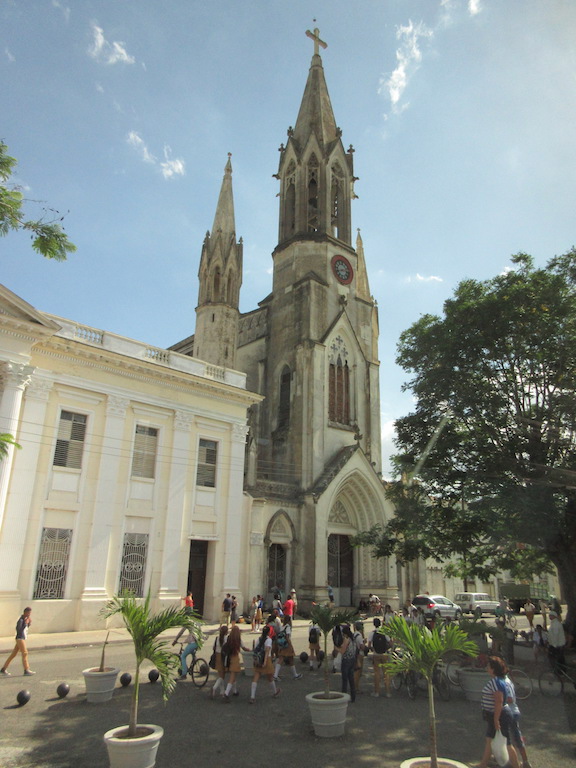 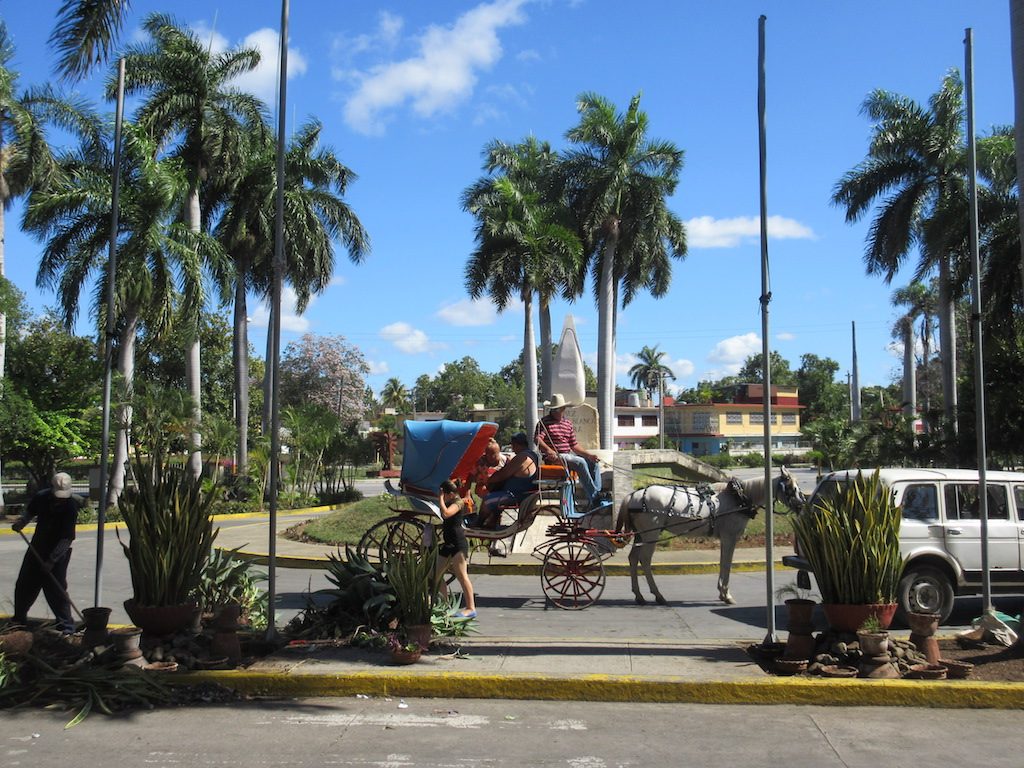 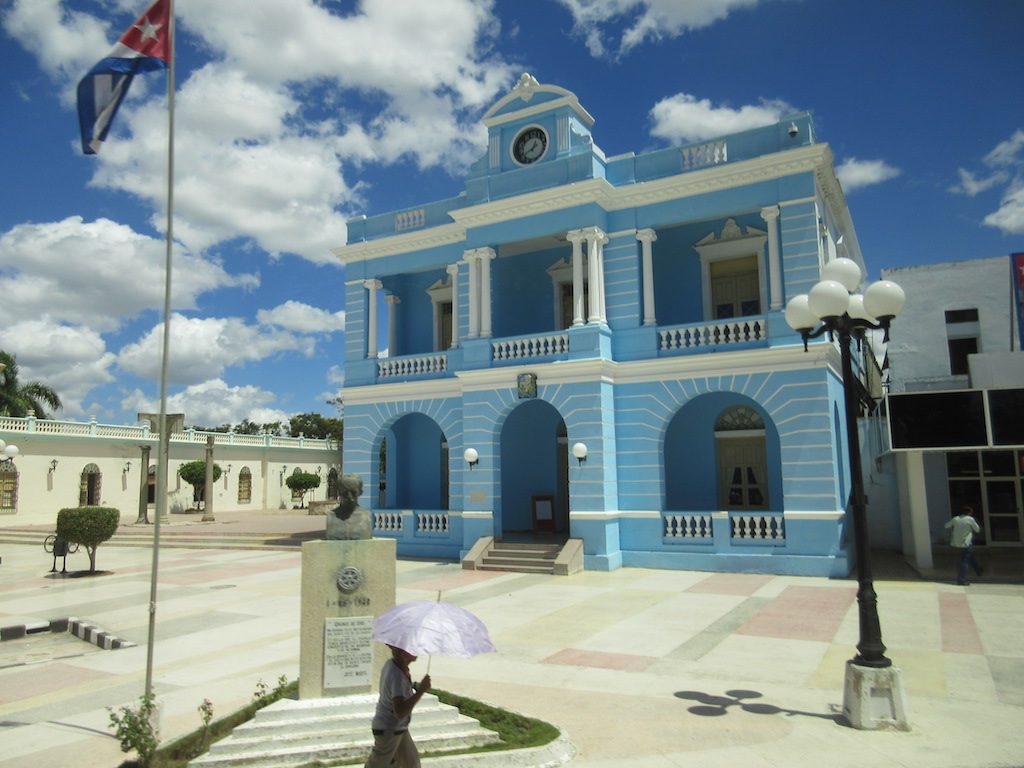 This morning we departed our hotel at 8:00am bound for the city of Camaguey about a six-hour drive away. The drive took us through the center or Cuba which is a bit flatter and dryer looking. There were many fields with cattle and goats and most of the towns are smaller and less populated. Throughout Cuba we have seen fences or hedgerows made of cactus delineating one property from the next. The cactus is trimmed on the sides and the top creating a dense thorny hedge that they say not even a chicken can get through. We stopped in the town of Bayamo for a comfort stop at a roadside hotel. For lunch we stopped in the town of Las Tunas for lunch at a restaurant and bar called the Cache. Las Tunas is located in central-eastern Cuba along the Carretera Highway between the cities of Camaguey, Holguin and Bayamo. It has a population of about 200,000. We arrived at the Gran Hotel in the heart of Camaguey about 4:15pm.

On our long drive to Camaguey, Jesus discussed with us Guantanamo Bay, the U.S. Naval Base and how much the Cuban people would like to see the U.S. close the base and give the land back to the Cuban people. The U.S. occupied Cuba for about four years after the War of Independence and before the Platt Amendment named after a Congressman who wrote a unilateral plan to give the the U.S the right to occupy a portion of the country as a military base. This was supposed to be a lease agreement at a cost of 2,000 pesos per year. The lease payments were paid by the U.S. until 1959 and nothing has been paid since. At one time about 1,000 Cuban people worked on the 50 square mile base along with about 2,000 U.S. servicemen, but today no Cubans are employed. The Platt Amendment was abolished in 1934 but the U.S. still occupies the land even without consent of the local government.

Camaguey is the nation’s third largest Cuban city with a population of about 325,000 inhabitants. This city was moved inland from the coast around 1528 to avoid continuous attacks by pirates. Due to their pirate experiences, the new city was built with a confusing maze-like lay-out of winding alleys and streets. The symbol of the city is the clay pot or “Tinajon,” used to store rain water for future use. Clay pots are found everywhere throughout the city. The city was designated a UNESCO Heritage Site in 2008, so they have been busy restoring many of the historic buildings.

Our hotel for two nights was the Gran Hotel, located on one of two pedestrians only shopping streets in the historic center of town. The hotel is quite an old building which has been restored and has five stories. The ground floor has an old world style lobby with dark woods, a bar, outdoor courtyard with a central fountain and a small swimming pool. Our room was smaller in size, but had about 12-foot-high ceilings with crown molding, tiled floors, vintage styled furnishings and a small bath.

For dinner we met in the lobby and walked about ten minutes to a local Paladar called the Meson Del Principe de Paladar. We had a welcome drink of rum and coke, two drinks of our choice, either chicken noodle soup or a mixed salad, an entrée, dessert and coffee. The choice of entrée’s included a lamb stew as they call it, but here it is actually a goat stew. The goat was very tasty and the meal was very good. They had a couple of musicians that played the guitar and violin as well as one that sang.
Back at the hotel we went out to the pool at 9:30pm where they had a water ballet show. Three girls and three boys did some dancing on the pool deck and then did some synchronized swimming in the pool.