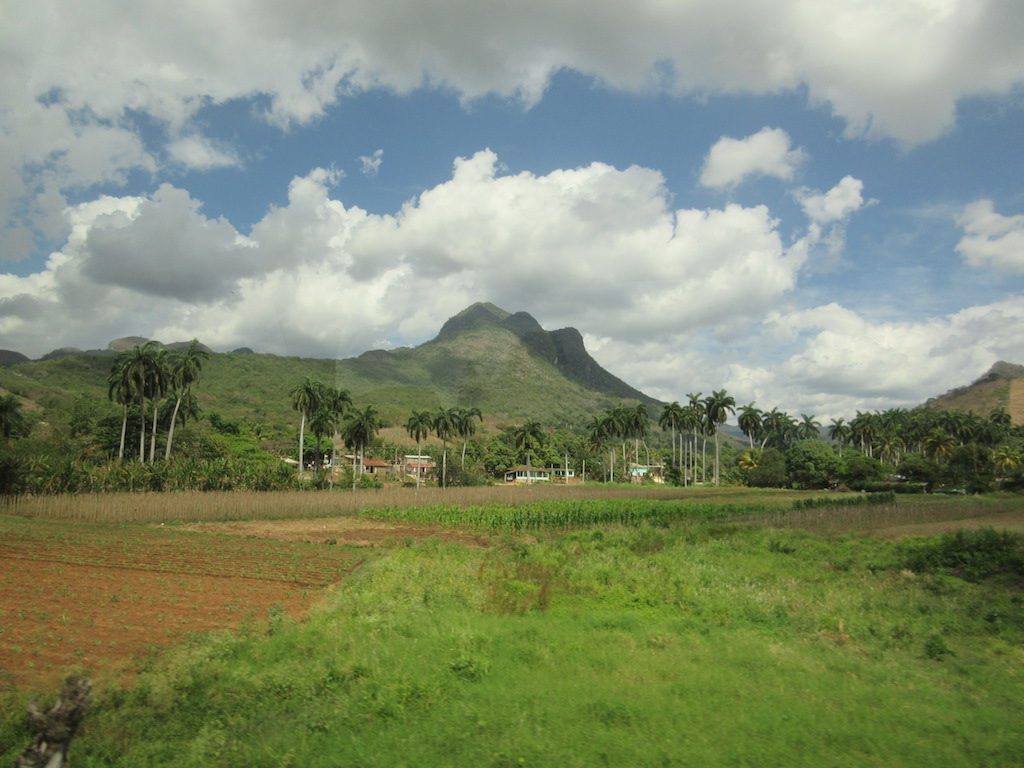 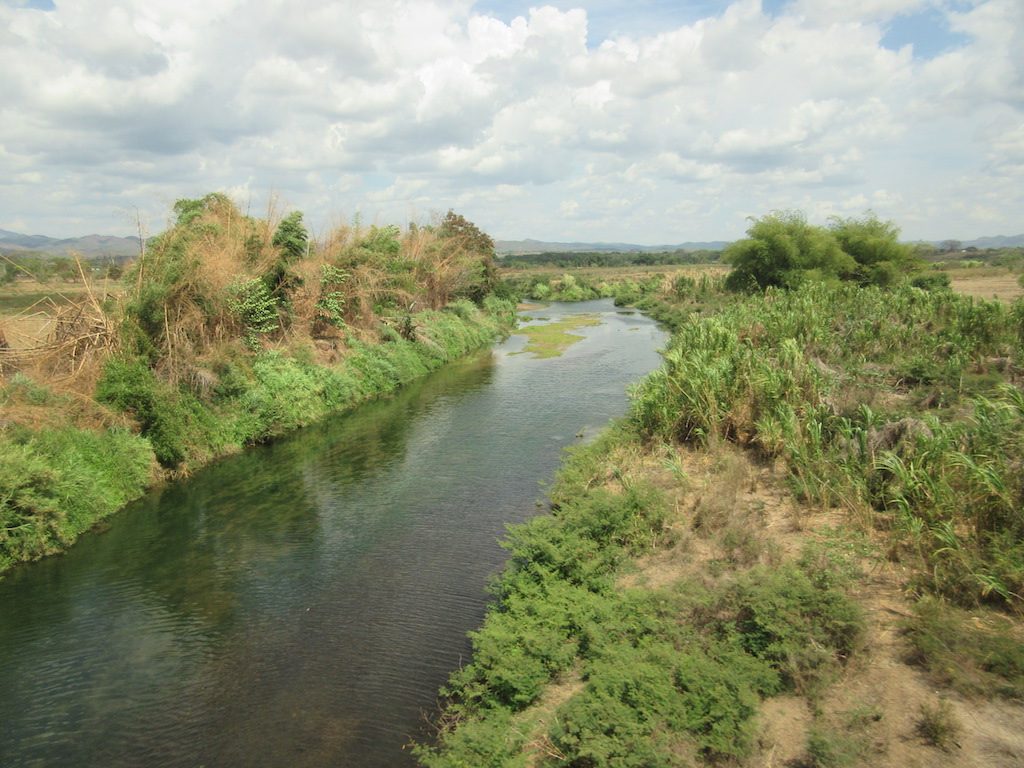 River on the way to Trinidad 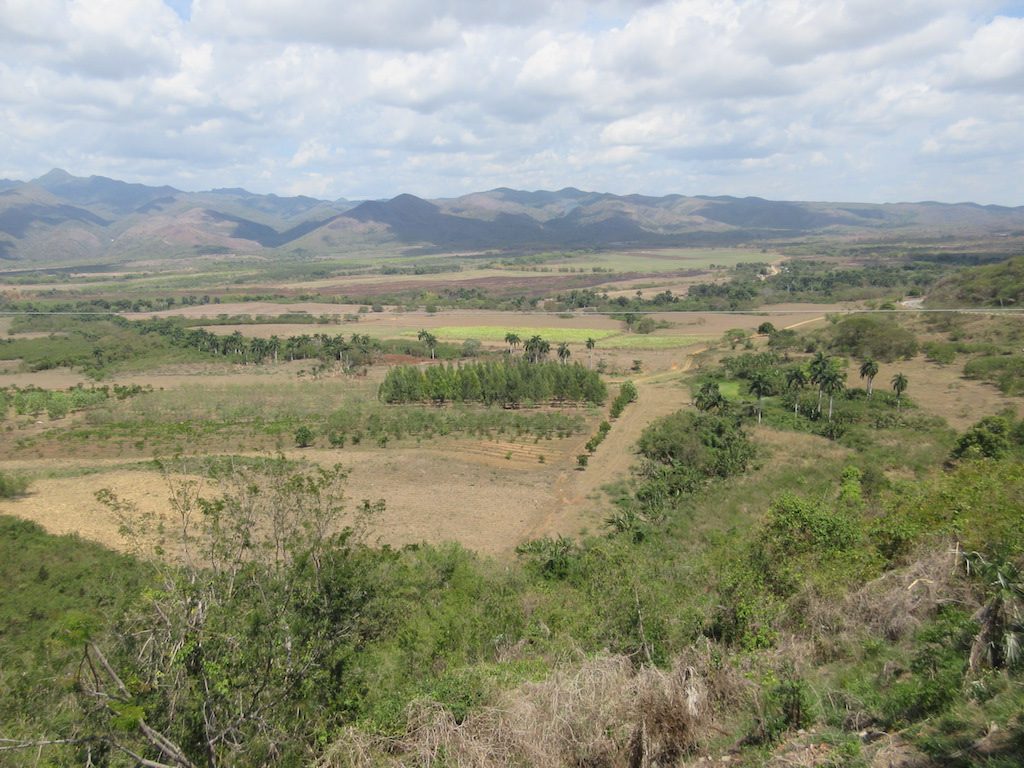 Tobacco Valley on the way to Trinidad 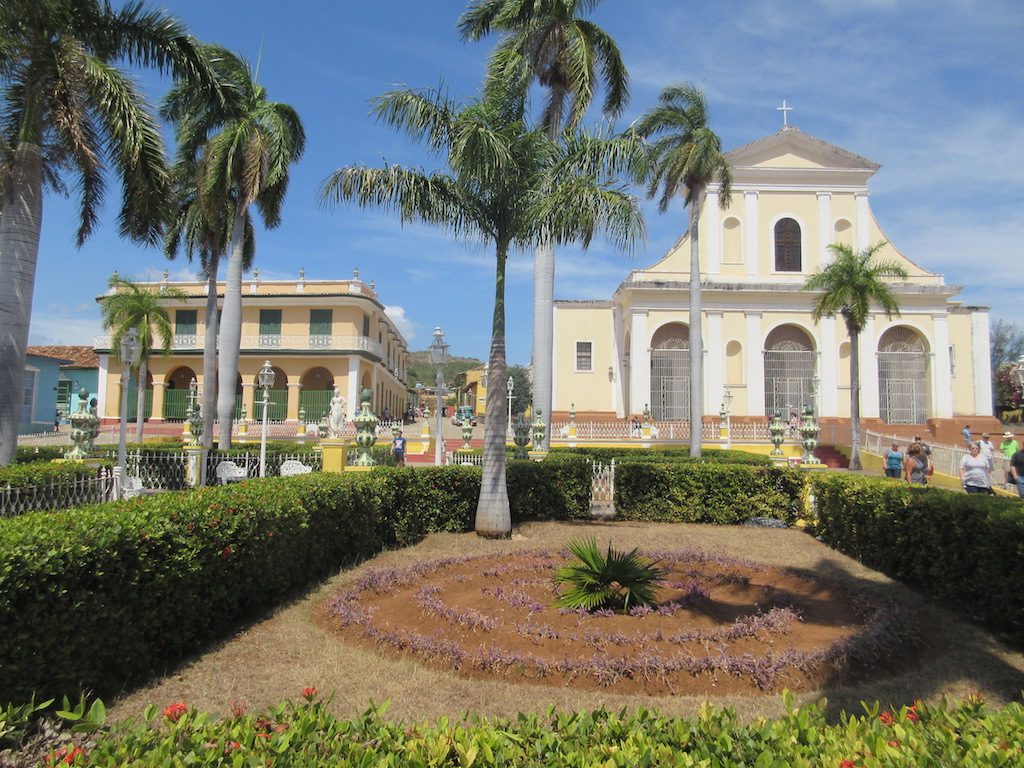 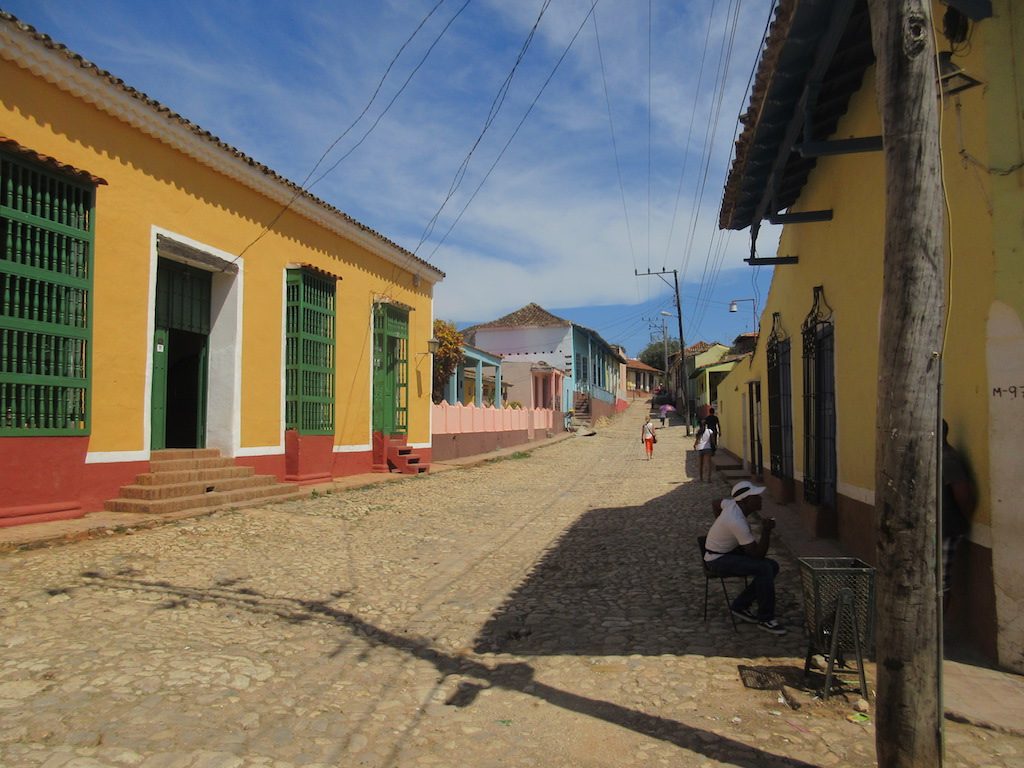 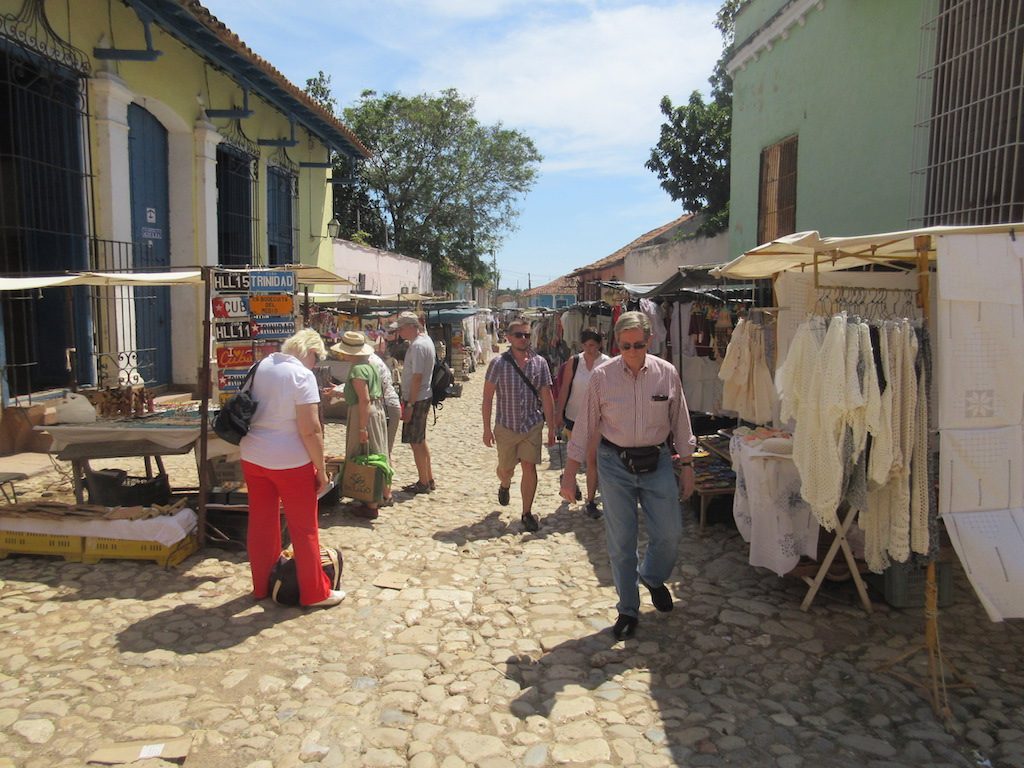 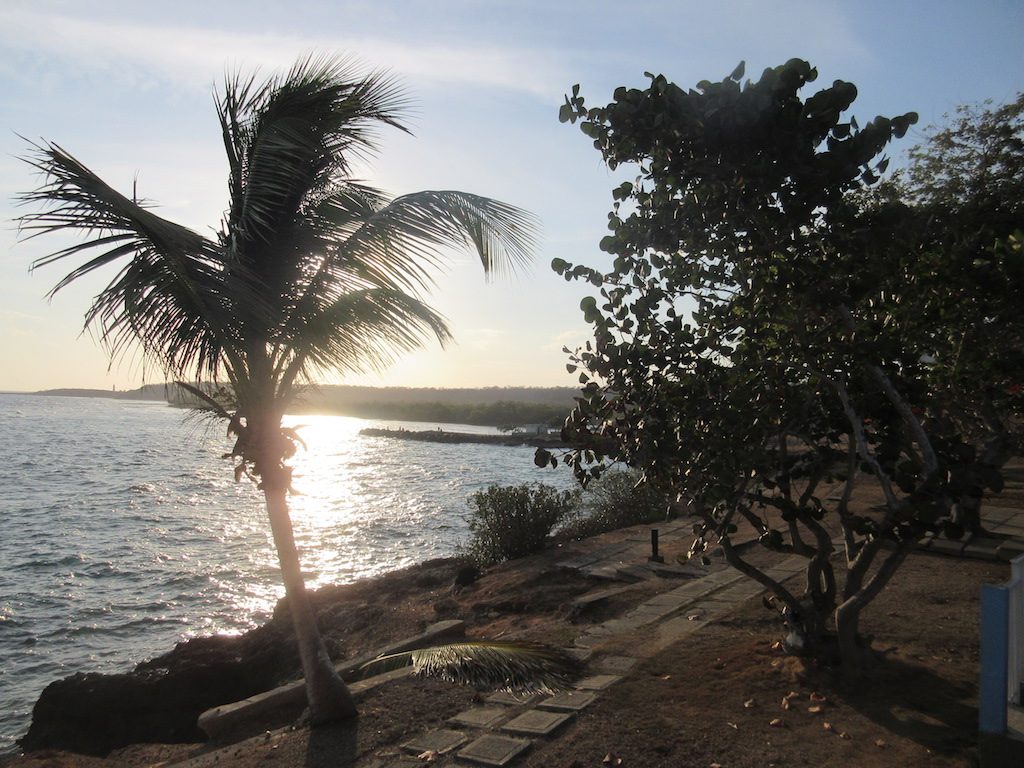 View at our Cienfuegos Hotel 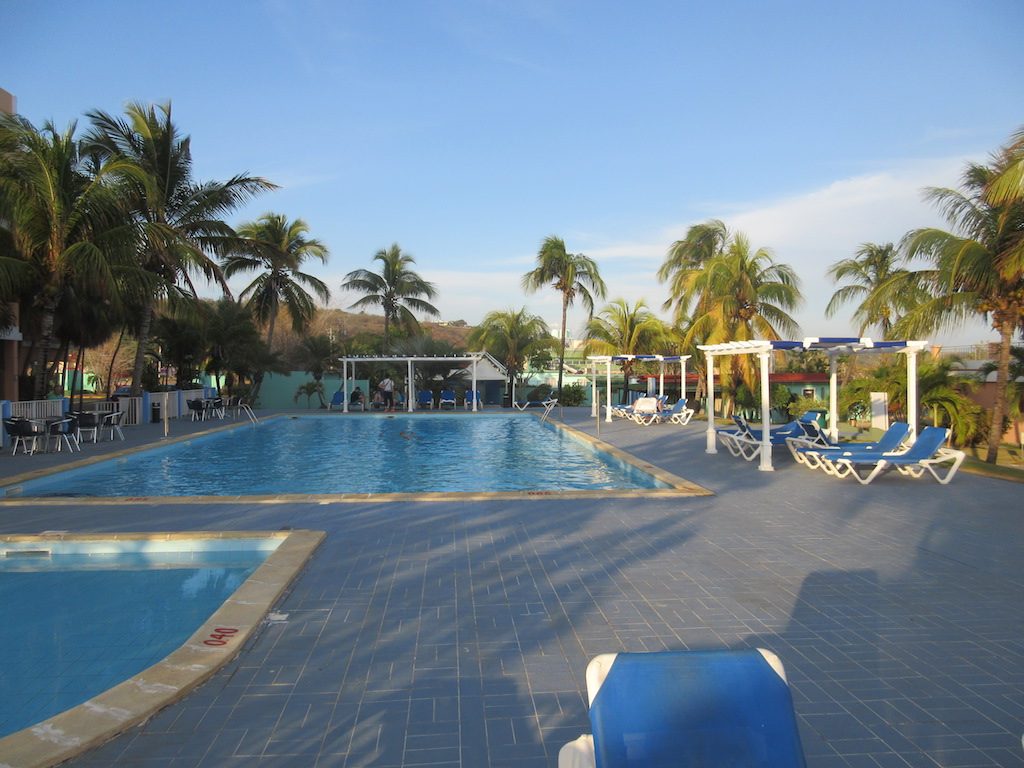 Pool at our Cienfuegos Hotel

We left the hotel in Camaguey this morning about 8:00am bound for the town of Trinidad. The trip took about five hours with a fifteen-minute comfort stop at a roadside restaurant. The drive was through mostly flat dry land used for raising cattle and goats. As we neared Trinidad we began to see the foothills and mountains that line the southern coast of Cuba in this area. We stopped at a lookout point overlooking what is known as the Valley of the Sugar Mills, named this because there were once more than 50 sugar refineries located in this valley and sugar plantations were everywhere.

The meticulously well preserved colonial city of Trinidad is located in south-central Cuba with a population of about 75,000 inhabitants. Built on huge sugar fortunes amassed in the adjacent Valle de los Ingenios during the early 19th century, the riches of its heyday are still in evidence in the colonial style mansions. Rambling cobblestone streets, stately palaces and plazas are everywhere. The buildings are brightly painted in shades of pinks, greens and blues and the streets are sprinkled with vintage American cars. The town is now a UNESCO World Heritage Site and so many of the historic colonial buildings are being restored within the downtown area and the cobblestone streets must be maintained.

We had lunch at the Paladar El Dorado, located in the historic center of Trinidad. The paladar was beautifully restored with several large dining rooms complete with high ceilings and crystal chandeliers. There was a pleasant private courtyard and guest rooms for rent upstairs. They gave us a welcome drink called a banana daiquiri that tasted little like bananas with rum in it. We dined on vegetable soup, green salad, bread, lobster, rice and black beans, banana chips and flan for dessert.

After lunch we walked a short distance to an African oriented religious temple called the Templo Yemaya to meet the local priest. This Santeria religion was brought to Cuba by African slaves who worked in the sugar plantations and is one of the three main religions practiced in Cuba.

We then were given a short amount of time to wander the cobblestone streets of town to explore the architecture and shops on our own. The town was by far the busiest that we have seen thus far, with tourists filling the streets. There are many of the old homes and buildings that have been converted to art galleries and shops on the lower floors and sell all sorts of carved wooden figures, paintings, handicrafts, T-shirts and other items. On several of the streets there were flea markets filled with booth after booth of more souvenirs and artwork. It appears that with all of the tourists in town, everyone is an entrepreneur. You cannot walk far without someone asking you if you want to buy Cuban cigars.

We boarded the bus about 4:00pm for a 90-minute drive to our hotel for the next two nights called the Faro Luna Hotel in Cienfuegos. Cienfuegos, named after a local founder, is located on the southern coast of Cuba about 160 miles east of Havana and has a population of about 175,000. Settled by French immigrants more than 150 years ago, Cienfuegos is often referred to as the “Pearl of the South” because of its impressive beauty and colorful history. The hotel overlooked the Caribbean Sea to the south. We had dinner with the group in the hotel’s restaurant called the Caribe.