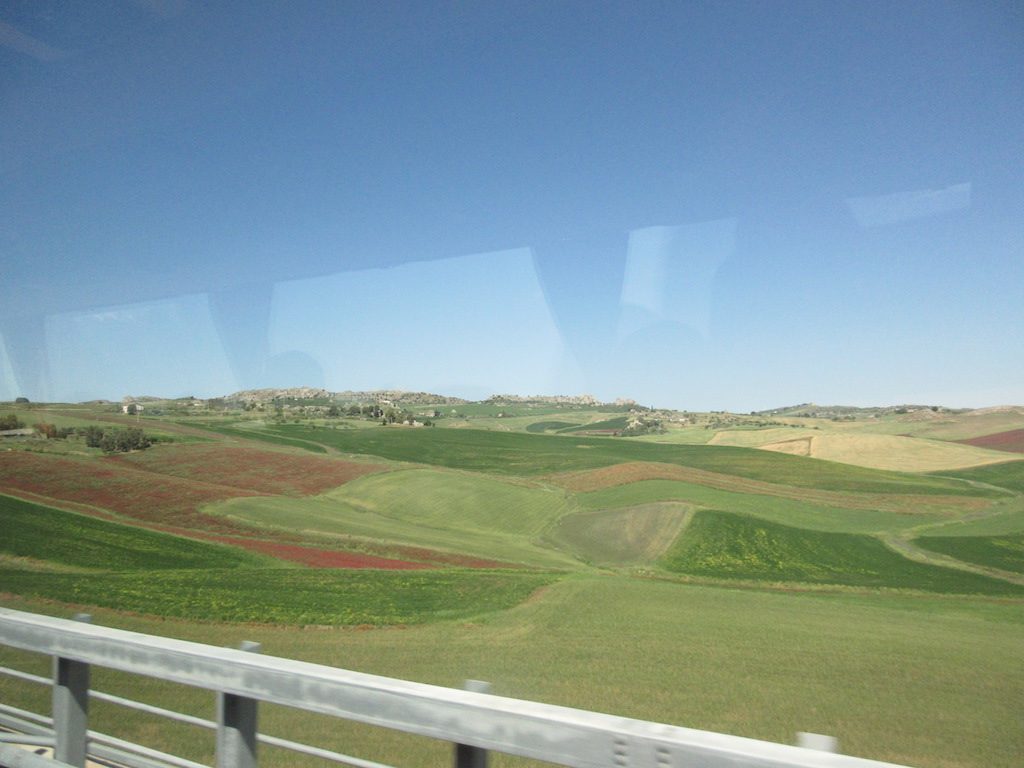 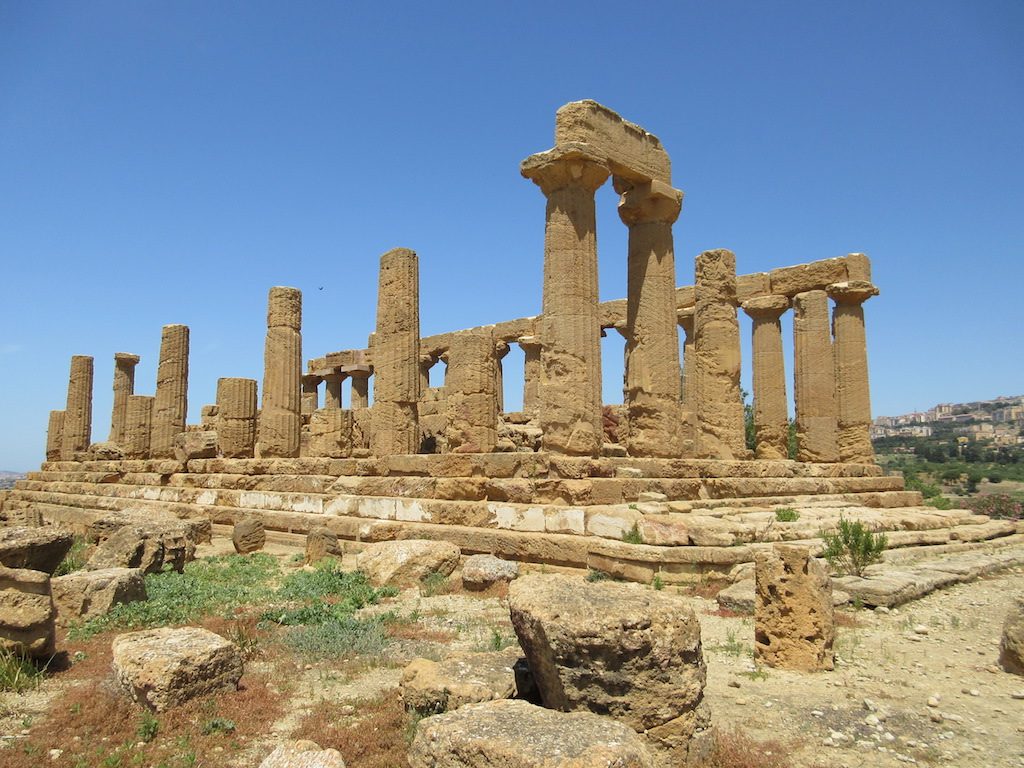 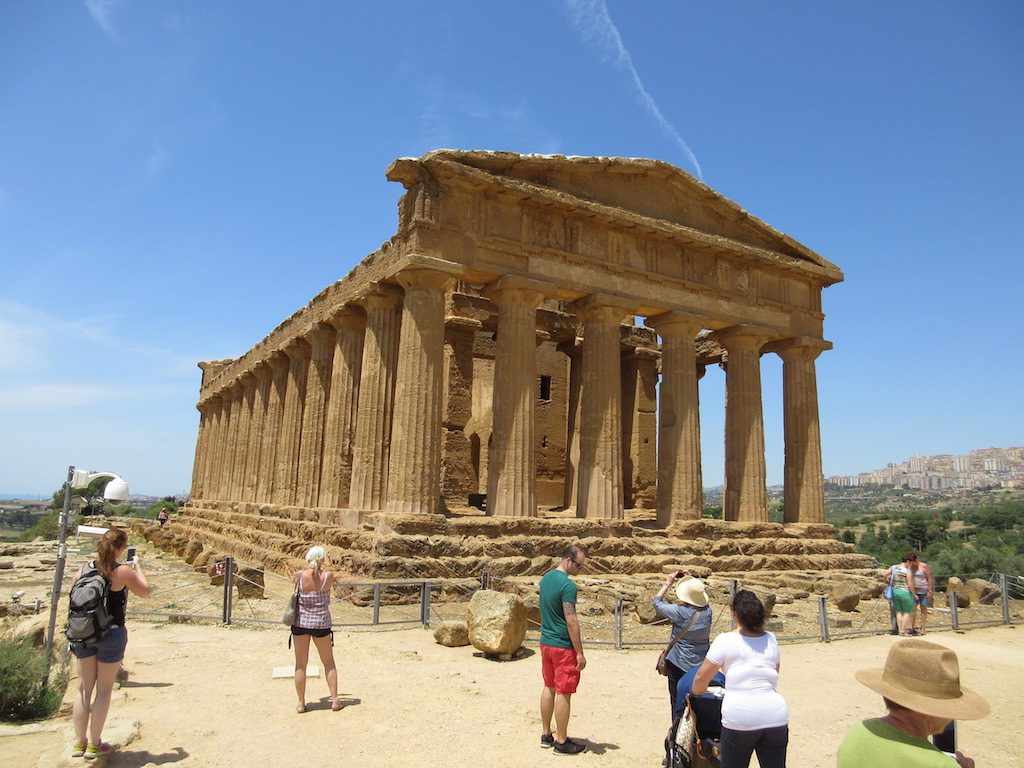 We departed our hotel at 7:30am bound for the town of Agrigento and then on to Palermo, our final destination in Italy. The total day’s drive was about 280 miles making for a full day’s trip with comfort stops and sightseeing. The drive took us through the central part of Sicily which is mostly rolling hills covered in all types of crops like citrus, wheat, grapes, pomegranates, almond trees and more. The countryside is quite beautiful as the crops stretch from the valley floors to the top of the hillsides, each crop planted right next to another creating a patchwork of colors and textures. The sun was out and the temperatures were in the low 70’s.

When we arrived in the town of Agrigento we took a guided walking tour of the Valley of Temples. This area is one of the most outstanding examples of Greater Greek art and architecture, a national monument of Italy and a UNESCO World Heritage Site since 1997. The archeological site which is more of a ridge than a valley consists of about five square miles of land. The remains of seven Greek temples dating back to the 3rd to the 5th centuries BC remain today. The best preserved of these is the Temple of Concordia built in the 5th Century BC. This temple has six Doric columns along the front and back and thirteen columns along the sides.

From the ridge of the Valley of temples you have a view of the newer city up on the hill with one building crowded alongside the next. The city looks compact and tightly confined while all around the town you see open space. Not far from the temples you can also take in views of the sea extending as far as the eye can see. The site was crowded with school children and visitors from around the world but it was a warm sunny day and we were happy to see the site.

In addition to the temple remains there are also remains of city gates, catacombs and residences.

From Agrigento we continued our drive north towards the town of Palermo stopping at a small roadside restaurant frequented by locals for a quick bite to eat. They had pizza’s, pasta, sandwiches, arancini rice balls, tons of pastries and even gelato. Kent and I shared a dish of pasta with eggplant and a red sauce and we each had a gelato.

Our hotel in Palermo was the Grand Hotel Piazza Borsa located in the heart of Palermo. The hotel was once a stock exchange building now converted to a hotel. There was a grand central four story open air atrium courtyard with fountain and plenty of seating. The hotel room we had was spacious with French doors from the main room and the oversized bathroom to a courtyard. It was a very nice hotel.

We walked with our Australian girlfriends (Hazel, Sheila and Annie) several blocks to a shopping street (that is pedestrian only in the evenings) to have a bite to eat. We found a small café where they served a variety of dishes from meat kabobs to pizza’s and we all found something we could eat. After dinner the girls headed back to the hotel and Kent and I walked further down the street to the opera house. It looked like a huge old opera house that I would have loved to have a tour of but it was closed already and we would not have time to return. We wandered some of the small meandering streets back to our hotel following the brightly illuminated churches. The city has hundreds of ornate churches of which we found as many as three on one small square. Many of the small neighborhood squares were filled with people drinking and eating at small cafes and bars.