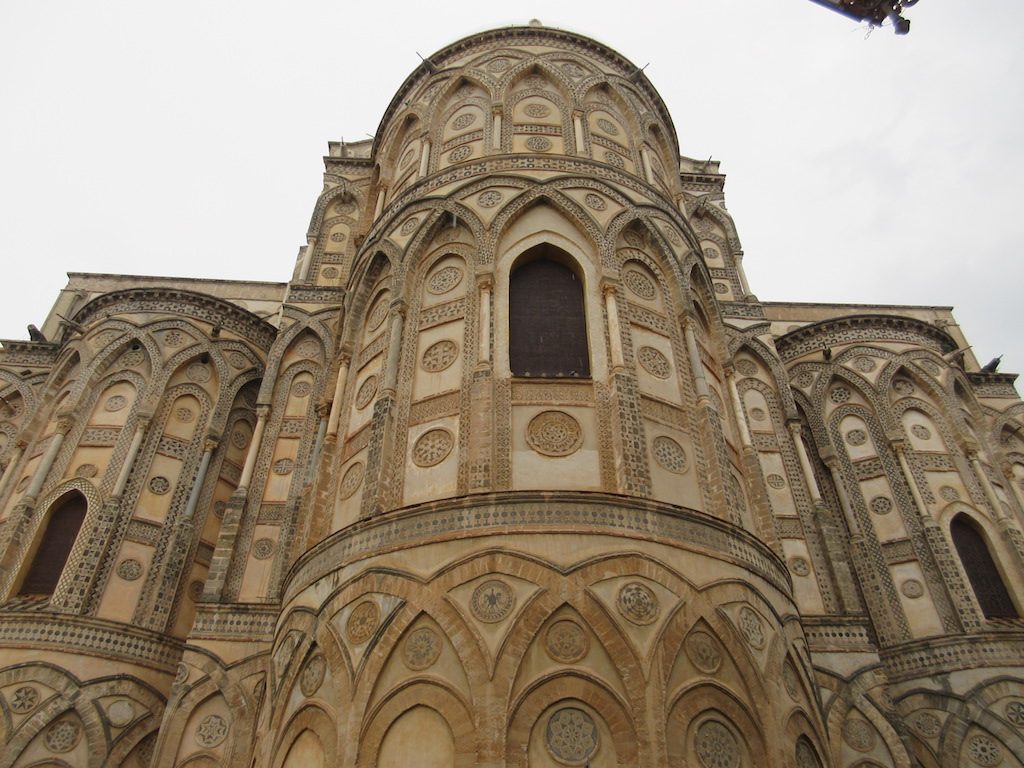 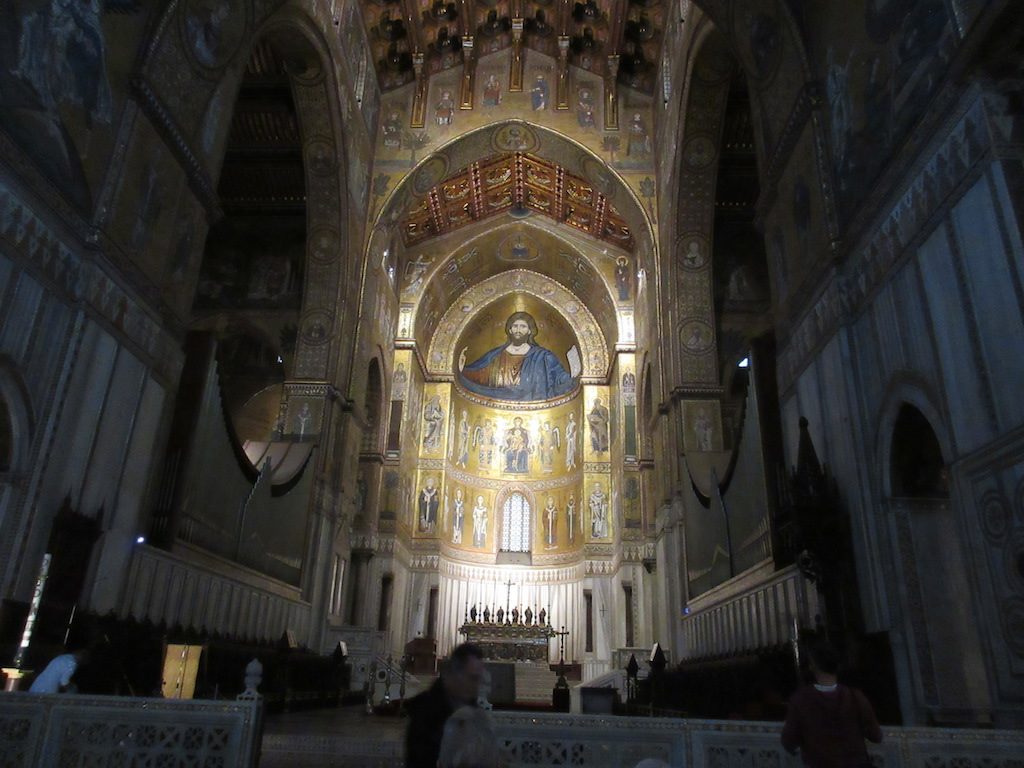 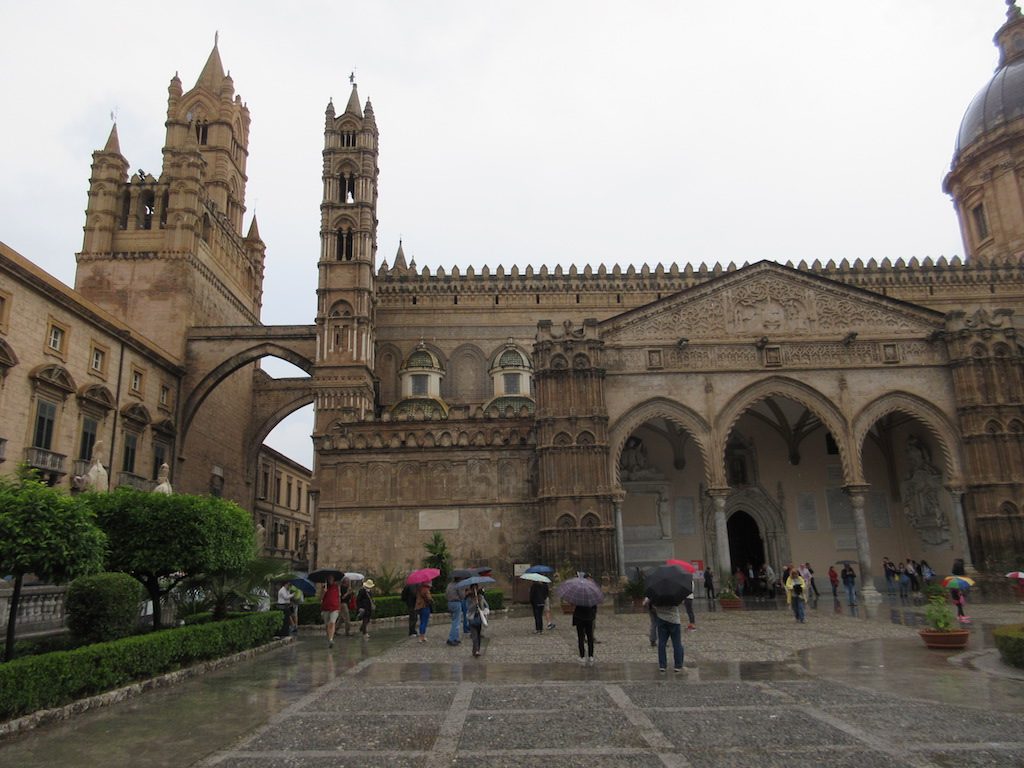 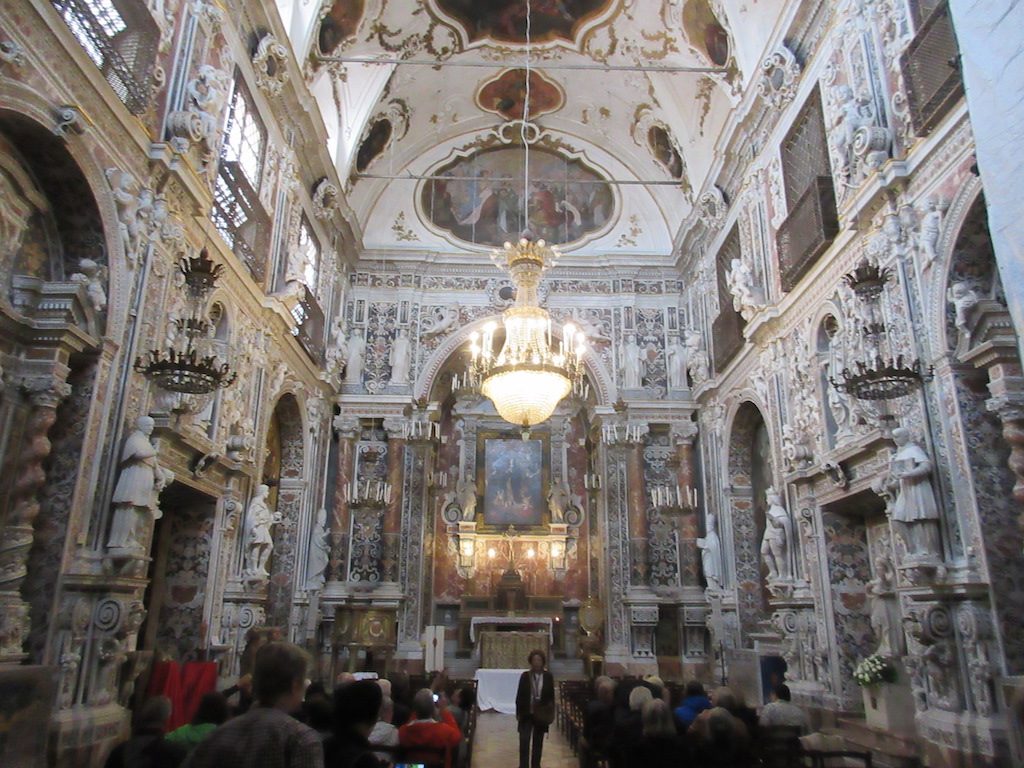 Palermo is located in the northwest of the island of Sicily by the Gulf of Palermo in the Tyrrhenian Sea and dates back to 734 BC when it was founded by the Phoenicians. The city is surrounded by a mountain range, has a natural port, an international airport and a population of approximately 1,000,000, mostly Roman Catholics. Incredible architecture abounds on every street with gracious buildings ornately decorated with ornamentation and wrought iron balcony railings. The sad part is that most of the buildings are in a state of disrepair and need a fresh huge amount of refurbishment. Graffiti appears most everywhere including a beautiful horseman statue in front of the main train station.

We took a guided tour of town including the ornate Piazza Bellini, or town square surrounded by beautiful churches. We visited the Capo Market where locals sell all types of goods, not only fruits and vegetables.  Then we visited the Church of Immacolata located inside the market of Capo in the historic district of town. The church was built between 1604 and 1740 and is decorated very ornately with art and paintings from many well-known Sicilian artists. Next, we visited the Palermo Cathedral first erected in 1185 on the site of an earlier Byzantine basilica. Due to the age of the cathedral and the many additions and modifications over the years it has a very eclectic design style mixing Gothic, Renaissance and Neoclassical styles.

We then took a drive up to the town of Monreale for a panoramic view of the city or Conca d’Oro or “Golden Shell” known for its orange, olive and almond trees.  We visited the 12thcentury Norman Cathedral, famous for its 50,000 square feet of precious Byzantine glass mosaics. Most of the mosaics include gold glass tiles that reflect the light and depict biblical stories. We returned to our hotel about 1:00pm.

About 4:00pm we departed for an original Sicilian farm called Antica Masseria Barone di Salvo in the town of Tumminia. We met the casero or cheesemaker where we saw how they make fresh ricotta. They gave us a sample of the warm goat cheese fresh off of the stove but it was not to our liking. They served us drinks in an inviting outdoor patio decorated with red geraniums in which we were entertained by a couple of young men who played the accordion, flute, tambourine and guitar as well as singing along.

After the cheese demonstration we were invited into a large dining room in the farmhouse where we enjoyed a four-course dinner. The first course was a beautiful plate of about ten items like eggplant, arancini, potato cake, cheese, olives and more. Next came pasta plate with two types of pasta. The first was an unusual corkscrew ribbon pasta with a clear type sauce with capers and tomatoes. The second was a small round pasta about the size of cheerios with a red sauce with meat of some sort. The main course consisted of a grilled sausage that had been sliced in half and breaded and a rolled pork stuffed with ham and other things. Dessert was a square of some type of vanilla ice cream with nuts and a crunch to it and covered with a rich dark chocolate sauce. It was all very tasty and many even thought that it might be the best meal of the trip.  We sat with our Australian gal pals along with three others from our group.

We returned to the hotel by about 7:30pm so folks could finish packing and get to be bed before their early morning departures.