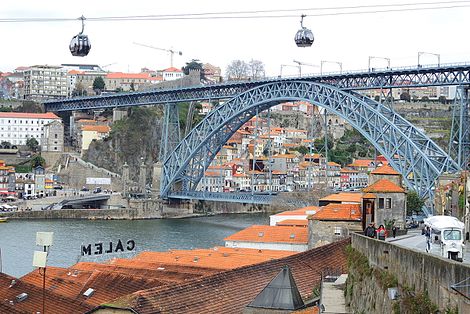 Aerial View of the Eiffel Bridge

Our flight from San Diego to Toronto started out poorly! When we arrived at the airport the Air Canada Rouge computer system was down. We stood at the front of the line for nearly two hours without being able to check our bags even though we had checked in online. The customer service agents made no announcements and no effort to communicate what was going on with the customers. Only when people came up to the counter and asked an agent would they find out that there was a problem with the computer system. We also learned the flight that was scheduled for the previous day never took off and that those passengers had been re-booked on a flight departing this morning. After waiting for nearly two hours the first-class passengers were manually booked on the flight that was leaving this morning. After the first-class passengers, the handicapped and those with dogs were attended to; then they hand wrote our baggage tags and re-booked us on the flight leaving today. The flight departed about two hours late but the passengers who had waited 24-hours for a flight were excited to be departing……even if it was late.

After arriving in Toronto, we learned that our flight from Toronto to Porto, Portugal was also two hours late departing. The new departure time was 12:20am.

Porto, with a population of about 235,000 people, is the second largest city in Portugal after Lisbon. The city is located along the Douro River in northwestern Portugal and its historical core was named a UNESCO World Heritage Site in 1996.

The history of Porto began around 300BC with the Celtic people being the first known inhabitants. Ruins from this period have been discovered in several areas. During the Roman occupation of the Iberian Peninsula the city developed as an important port. In the 14th and 15th centuries, Porto’s shipyards contributed to the development of Portuguese shipbuilding.

One of Portugal’s internationally famous exports is the port wine named after Porto and produced in the Douro Valley as far back as the 13th century. Other top exports include cork and sardines, now in season.

Our hotel for three nights is the Hotel Boa-Vista located in Foz, the noble part of the city where the Douro River meets the Atlantic Ocean. The word Foz simply means beaches. Over 150 years old, the hotel was built at a time when it was fashionable for Brits and well-heeled Porto residents to go on holiday. From the mid 19th century onwards, many of the mansions which can still be seen today in Foz were built and the local atmosphere was extensively portrayed by artists and writers of the time.

June 23rd in Porto is the annual Festa de Sao Joao do Porto or Festival of St John of Porto. The festival is to pay tribute to St John the Baptist and has been celebrated here for more than six centuries. An odd tradition among the participants is rooted in pagan courtship where they hit each other on the head with garlic flowers. Later this tradition changed as a local toy manufacturer added plastic hammers to his product line and local college kids introduced the hammers to the festival in the 1960s. Today the plastic hammers are seen throughout the city on this day and hitting one on the head wishes them a happy new year. They have many street concerts, dance parties, eat barbecued sardines, Caldo Verde soup made from collard greens, wine drinking and launch flame-propelled balloons over the city. At midnight a large display of fireworks can be seen over the Duoro River. After the fireworks and parties some folks continue their celebration by walking about four miles along the Duoro River towards the mouth of the Atlantic to watch the sunrise and even bathe in the water.

Our friends Brenda and Cory Adams, who now live in Lagos, came to Porto for the weekend to see us. (Kent and Brenda attended high school in the same small town in Illinois and have remained friends.) They have lived in Portugal for the last five years and we had the opportunity to visit with them in Lisbon in 2016 when we were on a cruise to the far east. Brenda and Cory came to our hotel on Saturday where we had had drinks and dinner at the roof-top bar and restaurant.

On Sunday we walked (4+ miles)into the historic core of Porto to meet up with a friend, Joakim, a pilot with Easy Jet Airlines, whom we met on the far east cruise in 2016. He and his boyfriend, Pablo, were in town for the weekend celebrations and they spent the afternoon with us. We had coffee and Pastel de Natas at a city center coffee house. These Portuguese egg tarts are originally from Portugal but today are also found in Brazil and other countries with Portuguese immigrants. The small pastries are about three inches in diameter with a crispy crust filled with an egg custard and served warm with cinnamon or powdered sugar sprinkled on top. They were delicious and we could have eaten several more.
After coffee we stopped in at the 1916 train station in the center of town to view the beautiful murals on the walls. These murals are painted on approximately 20,000 azulejo tiles. The tiles are painted in blue on white tiles and are quite extraordinary. They reminded us of the ceramic Dutch tiles. The scenes depict battles, the conquest of Cueta and some generic country scenes.

We stopped into a beautiful church called the Cathedral of Porto for a peak around before crossing the unusual Gustave Eiffel-inspired Bridge over the Duoro River. This double-deck metal arch bridge spans the Duoro between the city of Porto and Villa Nova de Gaia. The bridge spans 564 feet and is the largest of its type in the world. In 1879 Gustave Eiffel presented a project to construct a new bridge over the Duoro with a single deck in order to facilitate navigation. The project was rejected due to dramatic growth in the area. In 1880 a competition was initiated to construct a double-deck metal bridge and the committee selected a project by a disciple of Gustave Eiffel. Today the upper deck of the bridge is dedicated to public transportation by metro trains and the lower deck is used for vehicular traffic. Both decks permit pedestrian traffic and the views of the river and the city from the bridge are spectacular.

Once across the bridge we took the Gaia Cable Car down to the river’s edge for a look around the area where the port wine cellars were located. The wine was made in this area and then transported down the Duoro River to the Atlantic Ocean and around the world. We left Joakim and Pablo to meet Brenda and Cory for dinner.

For dinner we went to a local Portuguese restaurant called Pedro dos Frangos where we had a filling local dinner of fish, breaded pork, fries, rice, spit-roasted chicken, melon wrapped with prosciutto and wine. It was very good and the price was very reasonable at only $45 Euros for dinner for four including a bottle of wine and a large bottle of water. We took a cab back to our hotel about 10 PM after some ice cream at another nearby restaurant…..no walking home!