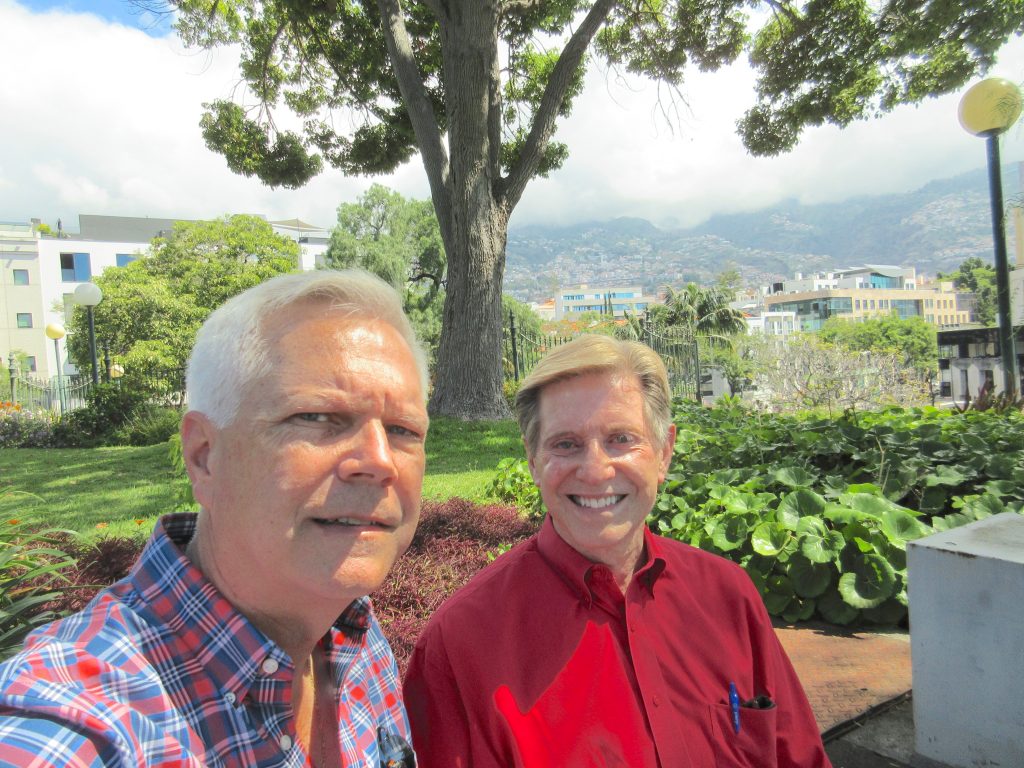 Kent and Mark in Funchal 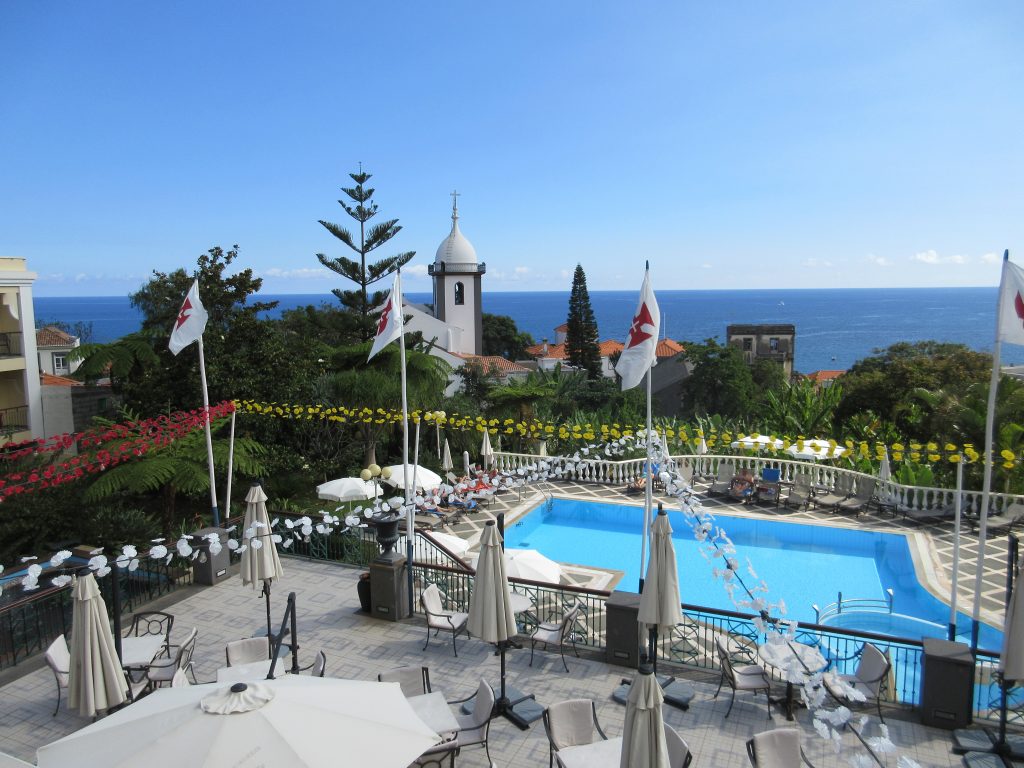 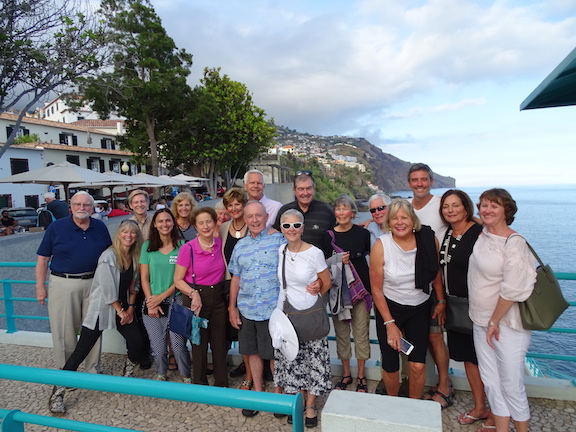 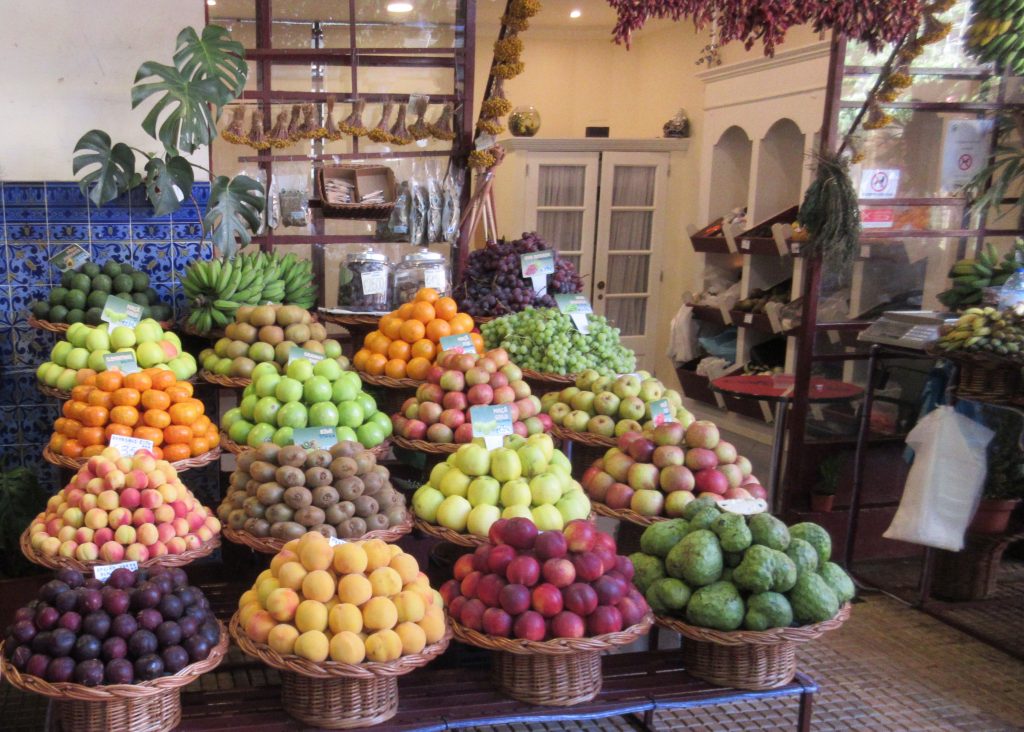 Kent and his Sea Bass Bones

Monday afternoon most of our group arrived on a plane from Lisbon and we met for a welcome dinner at our hotel. Our group consists of fifteen guests plus our tour leaders Kent and Christine Zimmerman from Colorado. Also, with us on the trip are a young couple from Mendoza, Argentina who now live in Spain, Patricia called Pato or “duck” and Marcello. They are helping with language classes, luggage and anything that might needs support. Many in the group are folks whom we have met on previous trips so a bit of familiarity and fewer new names to remember.

Tuesday, we departed our hotel in Porto for the airport for a two-hour flight to the island of Madeira. Madeira is a Portuguese archipelago situated in the Atlantic Ocean, southwest of Portugal and about 280 miles from the African coast. The archipelago is about 250 miles north of the Canary Islands and has a population of about 275,000 inhabitants. The capital of Madeira is Funchal located on the main island’s southern coast. The islands are called Madeira, Porto Santo and the Desertas. Madeira was claimed by Portuguese sailors in 1419 and settled in 1420.

In the 1400’s sugarcane was the island’s main economy. By the 1600’s, the lack of a labor source led to the import of slaves from Africa making up about 10% of the population. In the 1700’s the production of sugar shifted to Brazil and wine became the most important commodity. Today Madeira is a popular year-round resort visited by 1.4 million tourists annually. Known for its Madeira wine, gastronomy, history, culture, flora and fauna as well as embroidery.

Our hotel for the next 10 nights is the Quinta Bela Sao Tiago located in Funchal a short distance up from the sea. Our room has a beautiful view of the bay and the horseshoe shaped hillsides surrounding the bay. The steep hillsides are filled mostly with white and cream-colored buildings capped with red clay tile roofs. Our hotel has a lovely outdoor terrace restaurant and swimming pool nestled amongst green vegetation. There are palm trees, magnolia trees, cypress, bougainvillea, birds of paradise, fichus trees, sago palms and roses creating a lush oasis.

The weather in Porto had been mostly cloudy and gray although warm and then we arrived in Madeira to sunshine and 74 degrees weather. Unfortunately, the sun shortly turned to cloudy skies.

For dinner we walked a short distance to the cliffs overlooking the ocean where we dined at a restaurant called Riso or Rice. Most all of the dishes on the menu consisted of some type of rice. They had many varieties of risotto, red rice, black rice, basmati rice, rice pudding and so much more. For appetizers they served puffed rice, liver pate and some bread sticks and bread rolls. For starters folks shared things like shrimp kabobs with a mango mayonnaise sauce and goat cheese in a filo dough. For entrees we had the black pork cheeks with pureed potatoes and Portuguese beans that were green and about the size of a lima bean. Everything was really delicious and the setting overlooking the sea was beautiful. For dessert we shared mango gelato, black rice pudding and tiramisu.

On Wednesday, Kent and I walked into Funchal to have a look around town while about half of our group studies Portuguese. It is a beautifully clean city with several city parks filled with colorful flowers, lush trees and even a lake with fountains and white swans. The buildings that are currently occupied are well maintained, nicely painted and generally feature clay tile roofs. Many of the buildings stand boarded up and abandoned from the worldwide recession of several years ago. There are narrow streets with sidewalks decorated with small black and white mosaic stones. The shops are well maintained and restaurants are plentiful. We visited the main farmers’ market in a building where you can purchase fresh fish, produce, fruits, flowers and other merchandise.

We were given tickets for the Hop-On, Hop-Off bus tour so we could get a good overview of the city of Funchal. The route we took around the city took us to the highest point of the city, around the downtown and to the tourist areas where there is one hotel tower after the next.

In the evening we all gathered at a local outdoor bar and café for happy hour with drinks, sandwiches, fries and olives. After the happy hour some of our group went on to dinner at one of many nearby restaurants while Kent and I chose instead to indulge in the gelato before returning to our hotel for the night.