Funchal from the Gondola 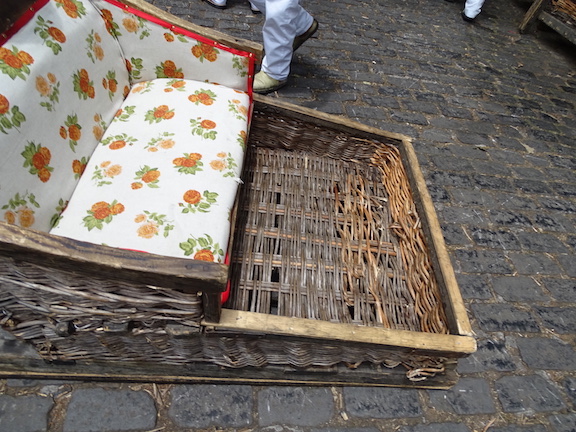 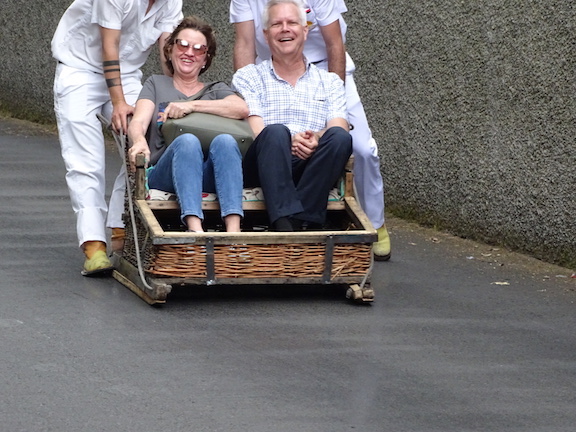 Mark and Karen on the Toboggan 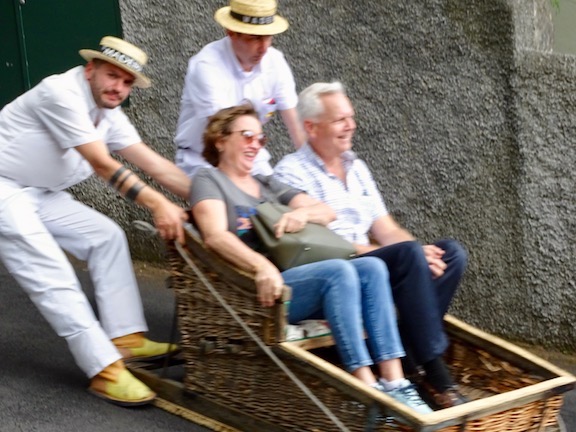 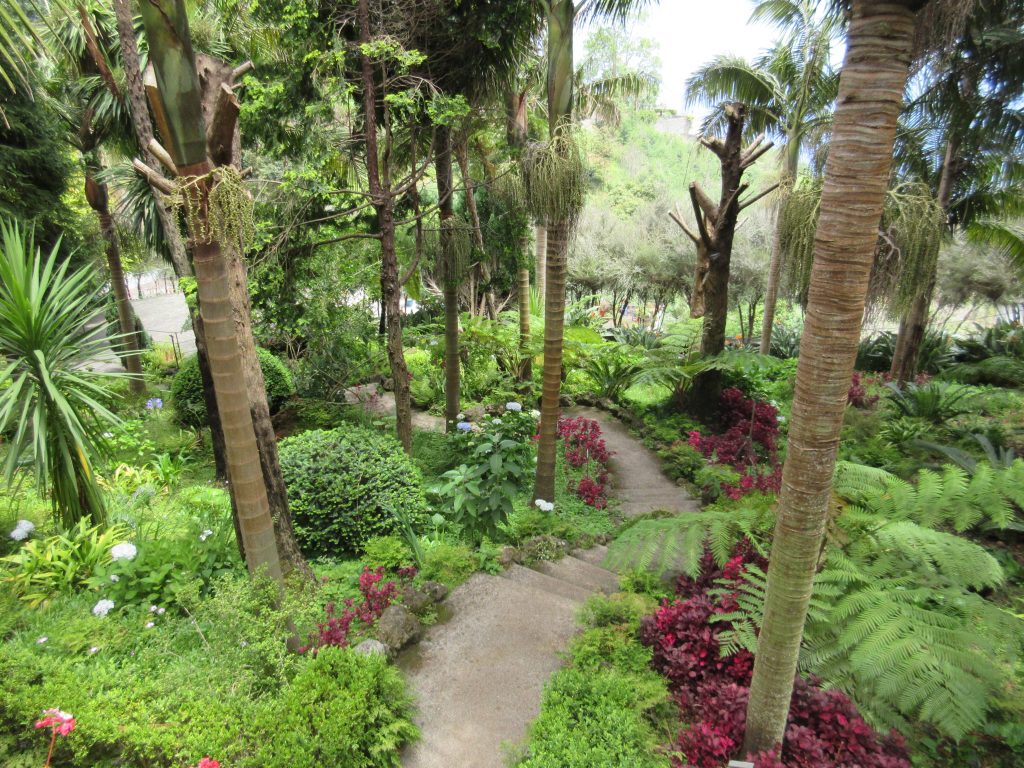 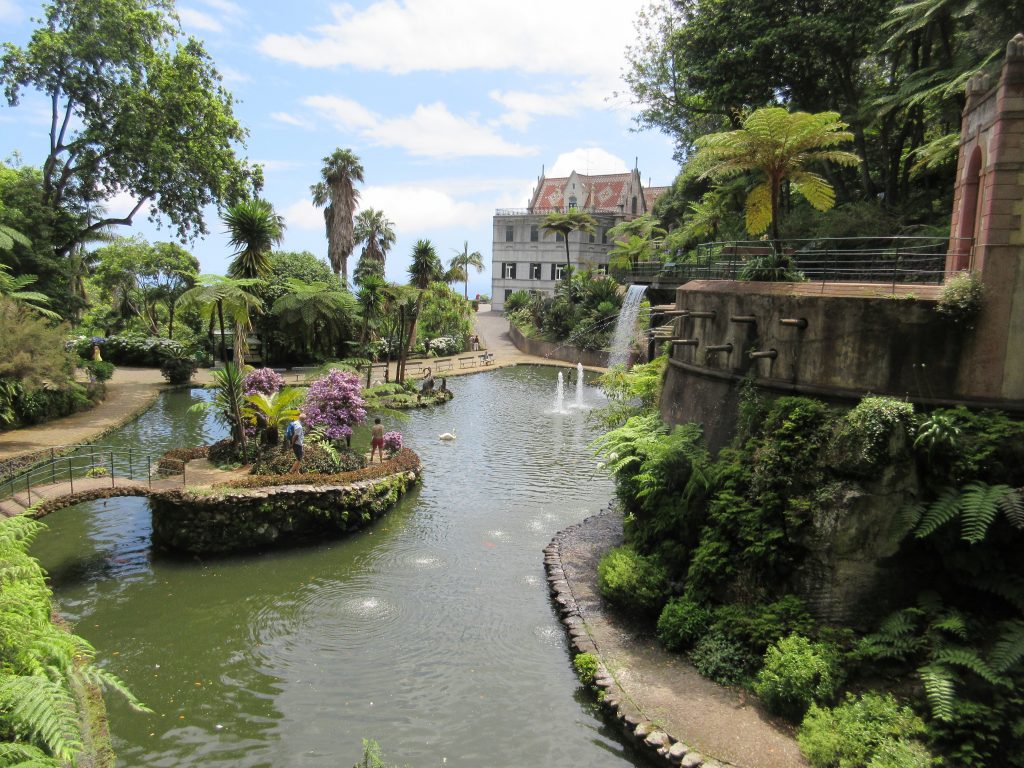 Lake at the Botanical Garden

On this day we took the cable car “Gondola” from the waterfront up the hillside to a height of 1,800 feet. The distance traveled is about 12,000 feet taking about 15 minutes. There are 39 cabins with eight seats each allowing them to transport as many as 800 passengers an hour. The cable car opened in the year 2000 to replace the Monte Railway which ran from 1886 to 1943.

Once we reached the top of the cable car at Monte we headed for the toboggan ride. Beginning about 1850 the toboggans were a fast means of transport down to Funchal from Monte for locals. The two-kilometer downhill journey takes about ten minutes and reaches speeds of nearly 50 kilometers per hour (30mph). The toboggans are two-seater wicker sleds with wooden runners, pushed and steered by two men dressed in traditional white cotton clothes and a straw hat. They wear rubber-soled boots to assist them with steering and braking. The ride was a bit scary at times but fun as well. Where else in the world can you have an experience like this? Kent declined as he is accident prone!

Our next stop was the Monte Palace Botanical Gardens where we had a bite to eat before exploring the gardens. The palace dates back to the 18th century when English Consul Charles Murray purchased the property and transformed it into a beautiful estate. In 1897 Alfredo Guilherme Rodrigues acquired the estate and built a palace like residence later converted into a hotel called the Monte Palace Hotel. From the hotel you can take in beautiful views of Funchal and the natural surroundings.

After Mr. Rodrigues’ death in 1943 his family was not interested in the hotel and it was taken over by a financial institution. In 1987 the financial institution sold the hotel to entrepreneur Jose Manuel Rodrigues Bernardo who, in turn, donated it to a foundation he created and named after himself. The foundation renamed the property the Monte Palace Tropical Garden adding two new lakes and expanding its already beautiful gardens. The gardens include extensive cycads, orchids, protea, ferns, cedars, laurels, hydrangeas and so much more.

The foundation adorned the gardens further with stones, windows, niches, pagodas, Buddhas, lanterns from around the world and sculptures. There is also a renowned ceramic tile collection dating from the 15th to 20th centuries including a panel of 166 terracotta glazed tiles entitled “The Adventures of the Portuguese in Japan.”

The gardens are quite spectacular and beautifully maintained. To explore the gardens is a bit of a hike as they are located on a fairly steep canyon with extensive paved paths and stone walkways. The lakes are filled with large collections of Koi fish and wandering the grounds are chickens, peacocks and pheasants.

After our visit to the gardens we made our way back to Funchal via the cable car to the local historical museum called the Madeira Story Center. The museum traces the history of the island from its first discovery up to modern day through a variety of displays and exhibits. Luckily for us all of the exhibits are well documented in four languages including English.

In the evening we all walked downtown to a 100-year-old bar and restaurant called the Ritz for drinks and plentiful appetizers. The upstairs bar terrace where we sat overlooks the city park across the street and it was a perfect setting for drinks. There was a light shower while we had drinks but it soon passed. Christian Ritz originally from Switzerland and who was a successful textile merchant doing business between Europe and the Americas opened the business in 1905. He had come here by accident when a ship he was sailing on was sent off course during a storm and fell in love with a local girl. We departed and went back to our hotel to bed.

During the evening we spent most of our time talking with Kent and Christine Zimmerman, our program managers. Sue and Karen sat nearby. Barb, who broke her hip in Croatia, and Bob sat in the center. Cindy, Jan and Natalie decided to stay for dinner, along with Pato and Marcelo. Vince and Cookie and Lynn and David headed out to dinner to another restaurant. Maryah and Bob declined to join our rowdy group.