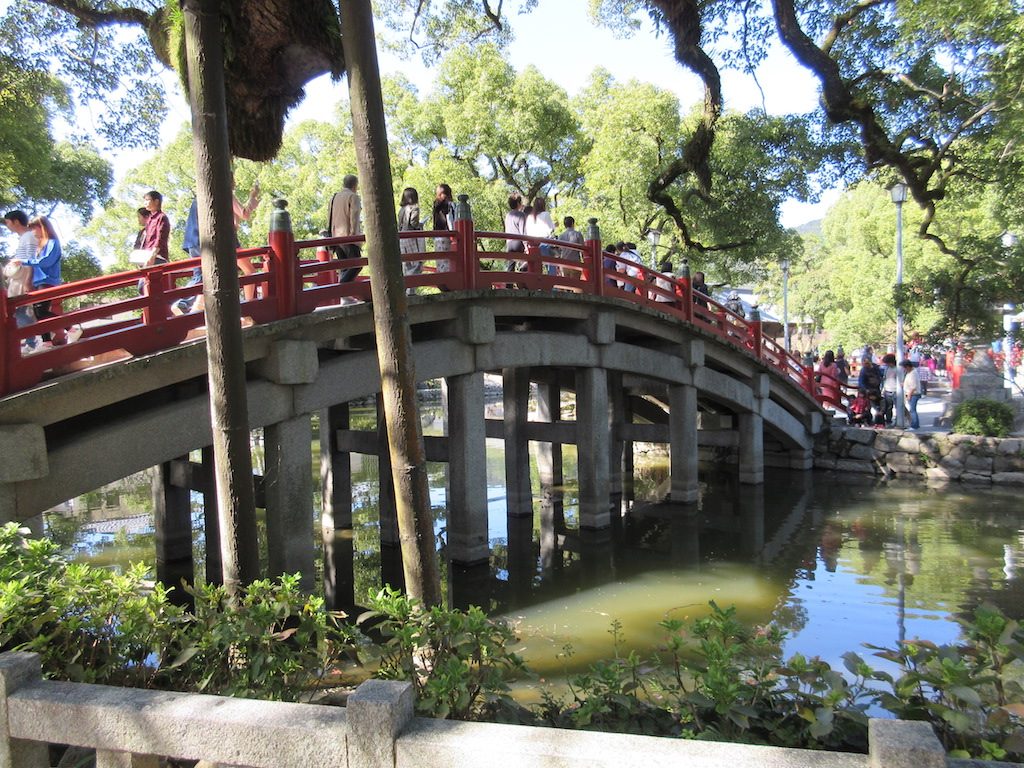 Bridge at one of the shrines 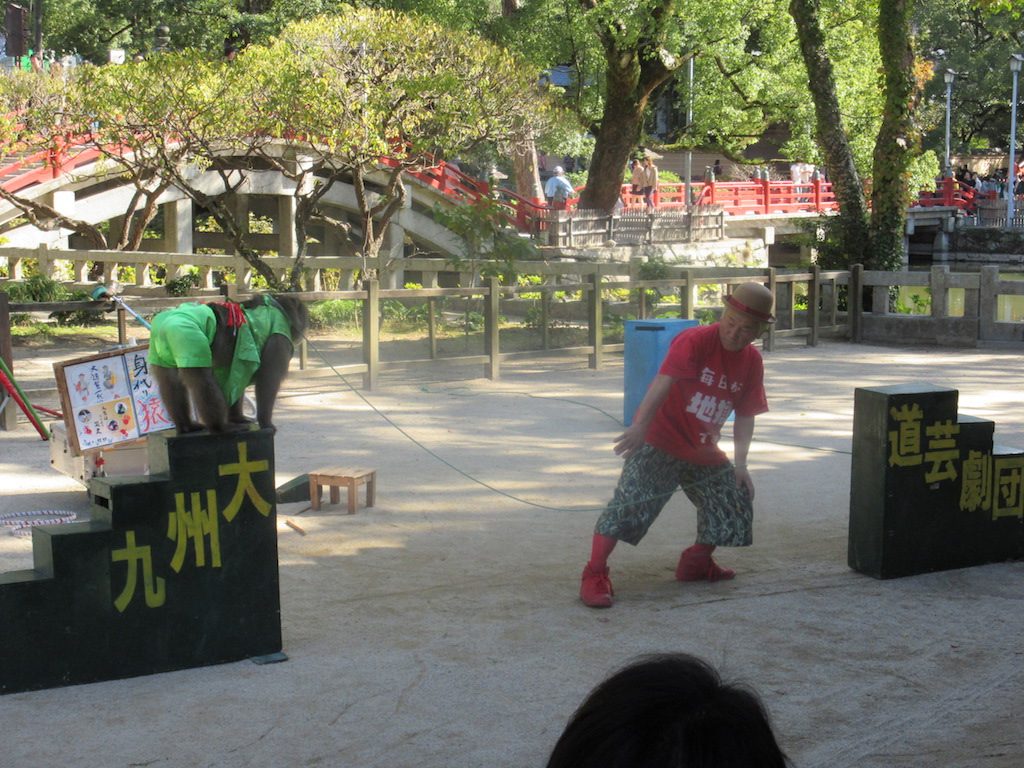 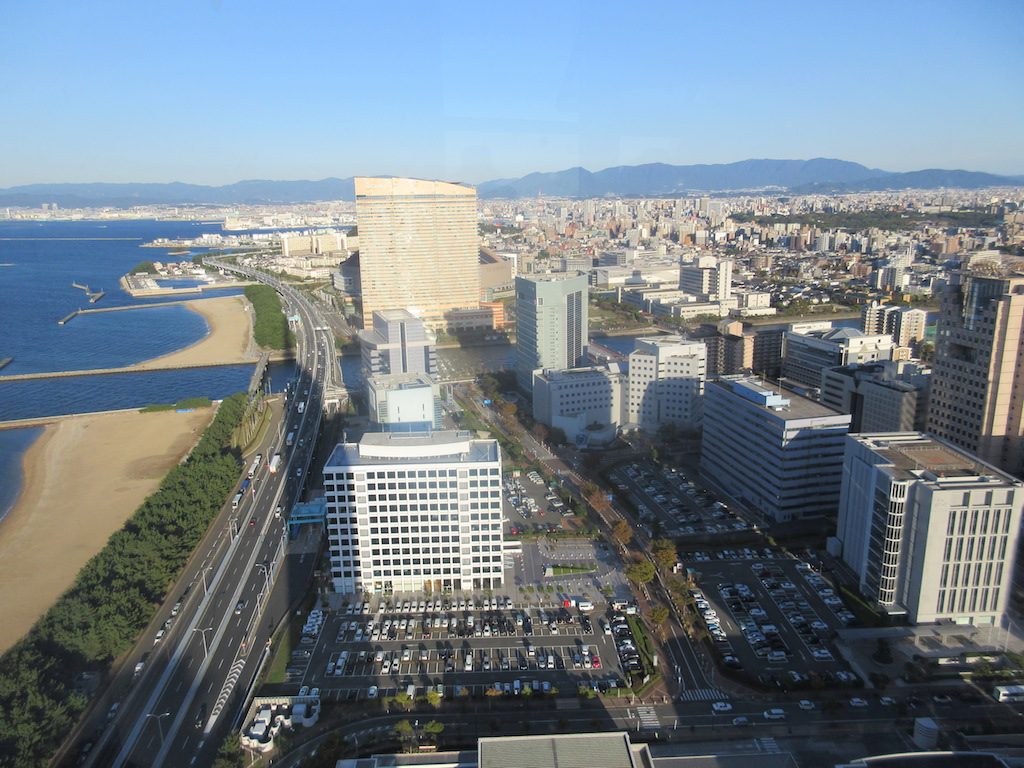 This morning the weather was glorious with sunshine and warm temperatures. We transited the Kanmon Strait this morning between two of the main islands of Japan transiting from the eastern shores to the western shores of Japan. The narrow strait is heavily trafficked with cargo ships and many industrial sites along the shores. We arrived in Fukuoka about noon.

Fukuoka is located on the northern shore of the island of Kyushu and is the most populous city and metropolitan area on the island with a population of about 2.5 million people. About 1.5 million of those live in the city. This area like so much of Asia has a humid subtropical climate with hot humid summers and relatively mild winters. This city sees an average annual rainfall of 63 inches mostly between the months of June and September. The humidity averages 70% and about 40% of the year it is cloudy. Fukuoka is Japan’s youngest major city and has Japan’s fastest growing population. Many universities–both national and private–exist in the area and is home to about ten thousand international students.

The shore excursion we took on this day was called “Kushida & Dazaifu Tenmangu Shrines and Fukuoka Tower.” We first drove to the Dazaifu Tenmangu Shrine where we walked about 15-20 minutes to reach the shrine from the parking area through a pedestrian only shopping street. The shrine was dedicated in 905AD to scholar Sugawara no Michizane commemorating a Heian official renowned for his learning and his purity of heart. The current shrine dates to 1591 and is a classic example of Momoyama Period architecture with its elegant, Buddhist-inspired bridges, serene ponds and ancient camphor trees. Michizane was so admired that there are now 12,000 shrines dedicated to him across Japan. This famous shrine to him is well known for its 6,000 plum trees that blossom in the early spring. Of note was the trained monkey performing tricks like walking on stilts and jumping from one platform to another. The monkey and its trainer gathered quite a crowd and many people put coins in his hat after each show.

We then continued to the Kushida Shrine in the heart of Hakata, passing through the Tenjin Business District on route. The shrine is very ornate and featured a lot of unique structures, shrines and garden areas. Founded in 758AD, the shrine is the starting point for the Oiyama race that ends the city’s annual summer festival on July 15th each year. Competing in the race are seven teams, representing different boroughs of the Hakata district of Fukuoka. The members of each team are clad in nothing more than a simple loin cloth and a short coat. The teams compete to carry a portable shrine along a five-kilometer course lined with cheering spectators who douse them with water. It takes around 30 men to shoulder the one-ton float, which is weighed down further by the team members sitting on top of it and shouting out directions and encouragement.

At birth and ages 3, 5 and 7, Japanese take their children to a Shinto Shrine to ask for good health and life. We saw many young kids dressed in beautiful Kimonos at the shrines for this occasion with their proud parents. Often the grandparents are with them and the entire family is dressed up for these special occasions.

We then visited the iconic Fukuoka Tower, considered a city landmark, it’s Japan’s largest seaside tower. Standing 767 feet tall, it is quite a sight, covered in 8,000 one-way mirrors that reflect the sunlight and passing clouds. At night the exterior of the tower is illuminated with changing lights depending on the season. Currently the lights represented Halloween that has become very popular in Japan. There are three observation decks including one for dining, each boasting 360-degree views of the area. The Tower functions as a broadcast antenna for TV and radio networks.

After dinner we enjoyed another short presentation of six Geisha’s. Four were dressed in the traditional kimono with white faces and red lipstick while the other two sang and played the guitar like instrument. The dances are called Tachikata Dances and the stories they sing are about love, sorrow and nature.