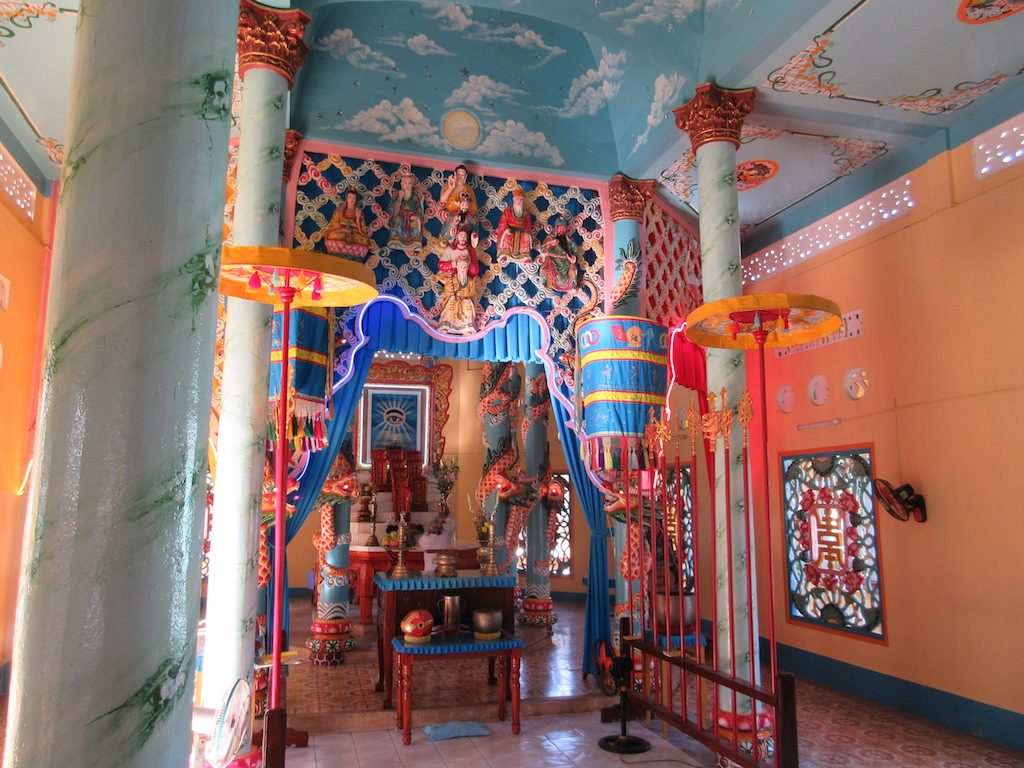 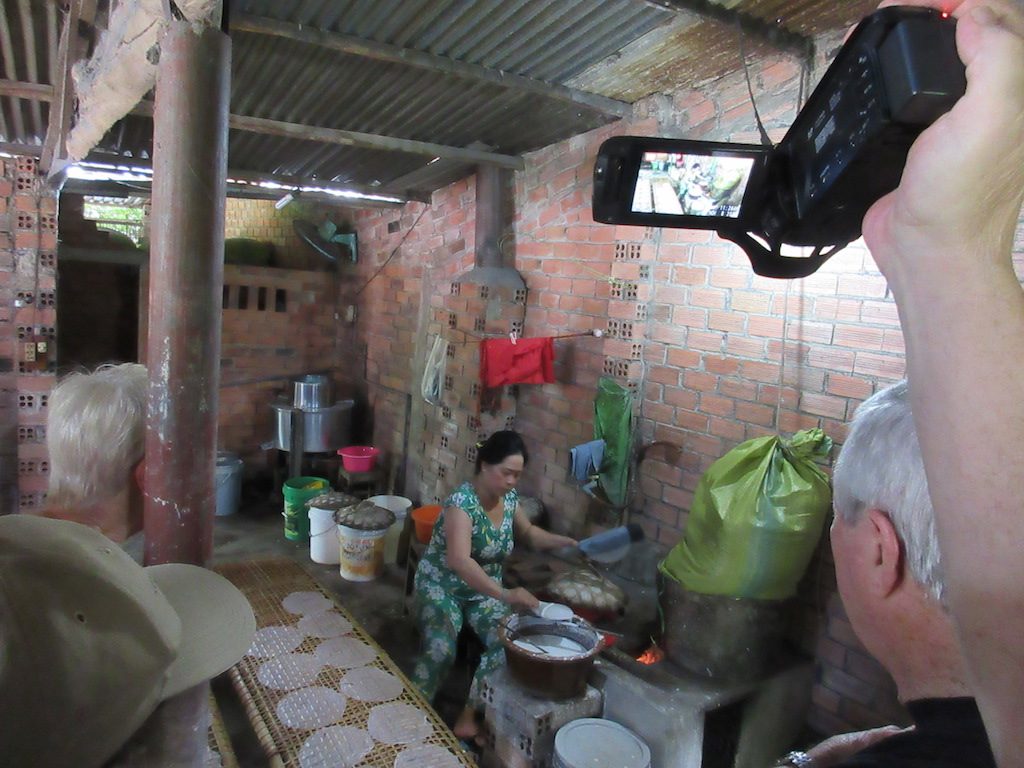 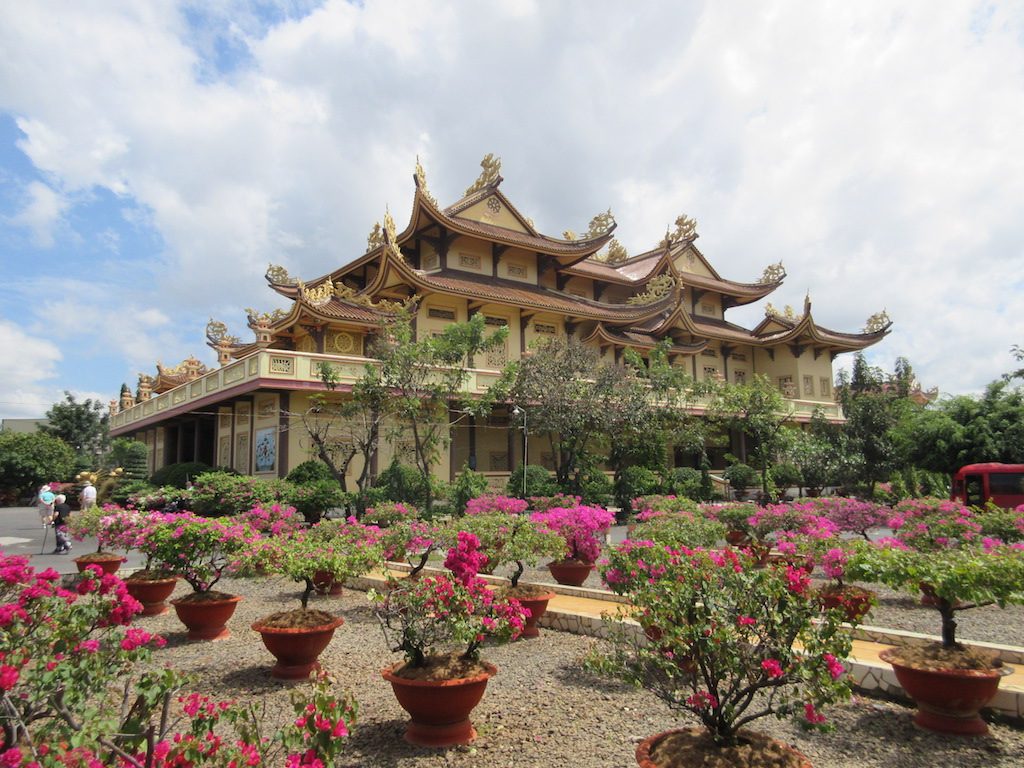 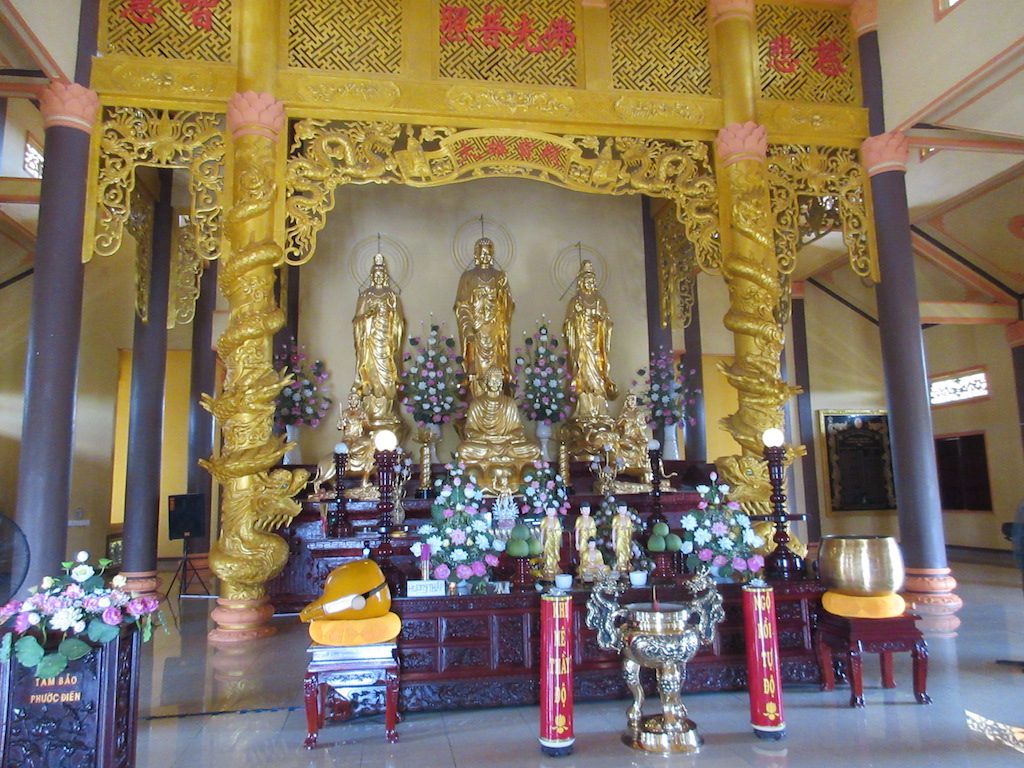 Miraculously after yesterday’s rainy day the weather was sunny, hot and clear today. Phu My is the gateway to Vietnam’s capital city of Ho Chi Minh City otherwise known as Saigon. It is approximately 80 miles and a 90-minute drive to the capital. Since we had visited Ho Chi Minh city previously we decided to do something different closer to the ship.

Located a short distance inland from Phu My Port is the untouched rural area of Ba Ria Province where we took a tour titled “Ba Ria: A Local Life Experience”. Here, a small township, located around a village square, is filled with fading colonial architecture—neglected, but nonetheless bringing a touch of French elegance to the typically rural surroundings. This area has seen little in the way of urban development and many inhabitants continue to lead their lives the way they have for generations.

We visited a local Buddhist temple that was two stories tall and was having a special day of prayer for the local blind community. When we arrived hundreds of sight impaired folks were coming out of the sanctuary after two-hours of prayer and having a ceremony where they released hundreds of birds. The parishioners were then taking to an outdoor covered dining hall where they were feed lunch before returning to the temple for an afternoon of prayer. The temple had two floors, each with an altar, the upper floor being much more ornate with lots of gold and many silk floral arrangements. As is custom in Buddhist temples there was no place to sit and instead only an open space to stand or sit on the floor.

We had the rare opportunity to enter the confines of two traditional Vietnamese homes. One was partitioned into three separate areas, was a 100-year-old house, complete with clay floors that have been passed on through six generations from the colonial times of the French to the present day. As in nearly all Vietnamese homes, a series of altars stands proudly in memory of deceased family members.

For all Vietnamese, rice is the staple diet, but it can also be made into many different forms. Our next stop allowed us to see the process of rice paper making and a distillery producing the local ‘moonshine’—a potent form of rice wine. The woman who was making small rice paper wrappers for spring roll type food can produce 3,000 wrappers a day. They sell them in a package of 50 for only $1.00.

Finally, we stepped inside a colorful Cao Dai temple. This religion was officially founded in 1926 and within a year the group had 26,000 followers. By the mid-1950s eight percent of South Vietnamese were Cao Daist. Founded in an attempt to create the ideal religion through fusion of secular and religious philosophies of east and west, Cao Daism is a fascinating combination of Buddhism, Confucianism, Taoism, Hinduism, native Vietnamese spirits, Christianity and Islam. The official Cao Dai symbol is the ‘divine’ eye and is inset into the front of the temple above the altar.

On our tour was an interesting person.  S/he was Canadian and at first glance you couldn’t tell whether s/he was a woman or man.  S/he, at about 60, very tall, had breasts and no bra, painted nails, short-cropped hair, shorts, blouse and men’s shoes and socks.  However, he used the urinal in the men’s room.  After conversation, we learned he was an Electrical Engineer and seemed friendly enough.  It will be interesting to talk further with him to find out more of his story.

The entertainment for the evening was a variety show with the magician Peter Methab from last night and Andrew Kennedy the comedian from a couple of nights ago.