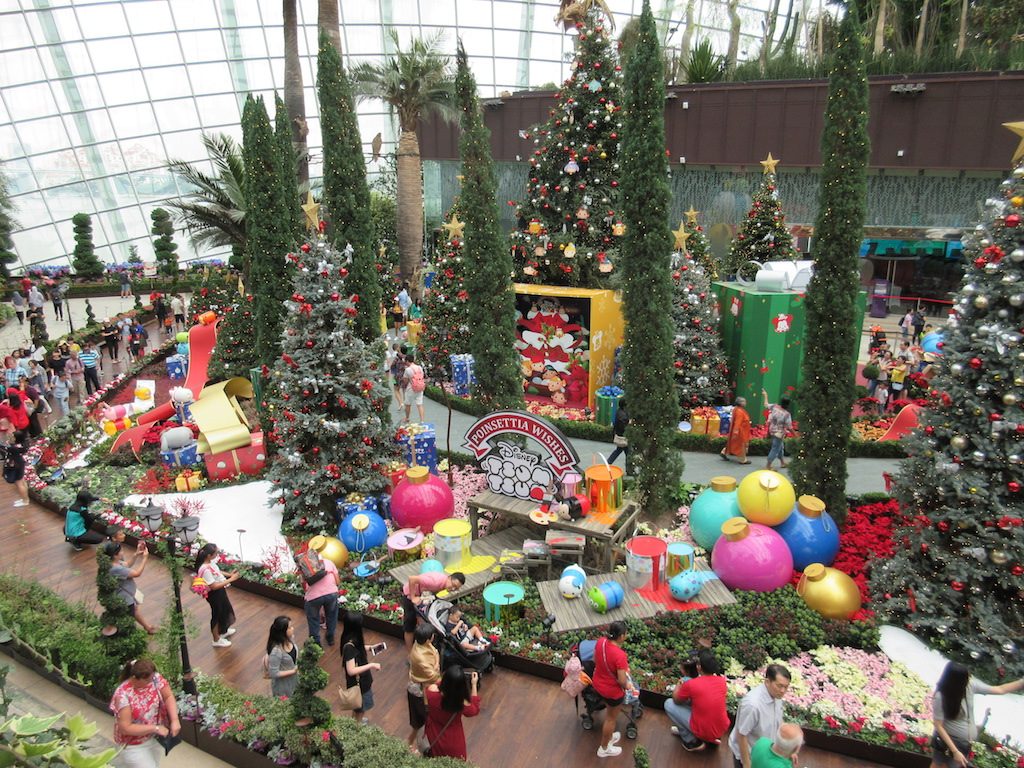 Gardens by the Bay Flower Dome 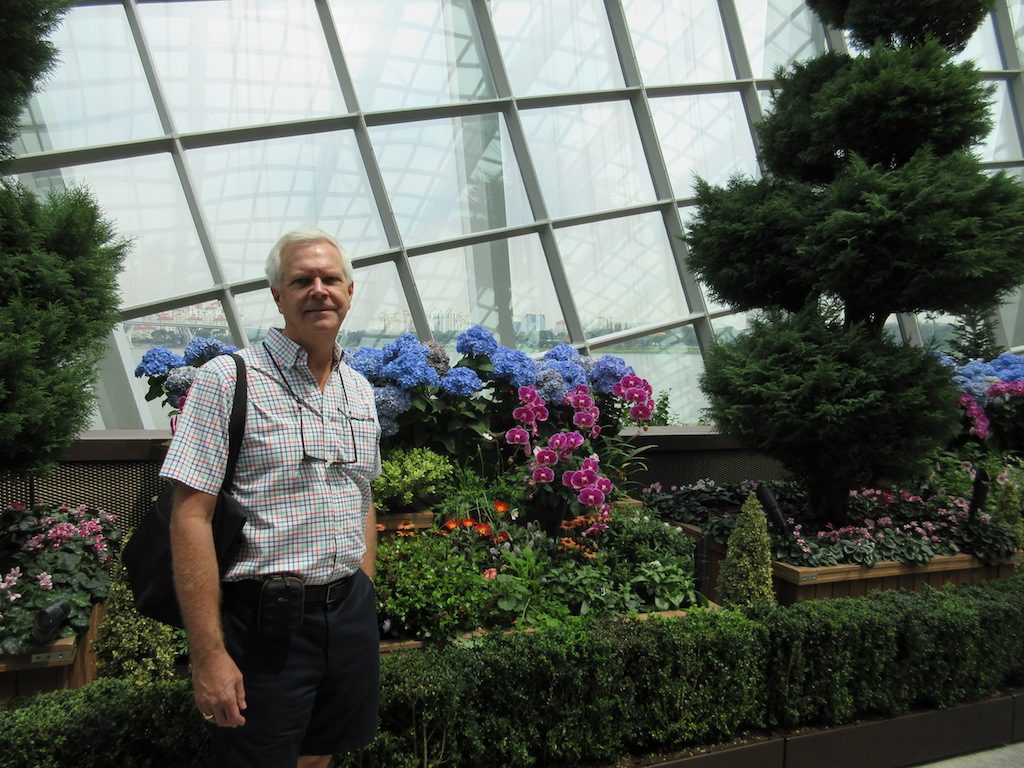 Mark in the Garden Dome

When we arrived about 8:00am the weather was quite cloudy although warm and humid.

Singapore is an island country and the smallest country in Southeast Asia, located on the southern tip of the Malay Peninsula. Singapore was the site of several ancient port cities and a possession of several empires in its history before the United Kingdom colonized it in the early 19th century. The Japanese occupied it during World War II before a merger established it as part of Malaysia. When Singapore acquired independence in 1965, having few natural resources, it was socio-politically volatile and economically undeveloped. Foreign investment and rapid government-led industrialization grew an economy which relies on exports of electronics and manufacturing, primarily crude oil refining.

Singapore has the second busiest port in the world… second only to Shanghai. It has the highest standard of living in Asia and 83% of the population lives in owner occupied housing. Most of this housing is high rise condo style built by the government with some type of subsidies. More than half of its nearly six-million residents use the efficient public transportation system daily maintaining low pollution levels.

Singapore has the world’s highest percentage of millionaires, with one out of every six households having at least one million US dollars in disposable wealth. This excludes property, businesses, and luxury goods, which if included would increase the number of millionaires, especially as property in Singapore is among the world’s most expensive. Singapore does not have a minimum wage, believing that it would lower its competitiveness. It also has one of the highest income inequalities among developed countries.

Security and immigration in Singapore are very high. Every time that you get on or off of the ship you are required to line up to be processed through immigration and to have your bags checked and you are put through an x-ray machine. Immigration takes your thumb prints and they pulled several folks into a private side room for further questioning before being allowed to go ashore.

We ventured out on our own to explore the Gardens by the Bay requiring us to take the subway system and to change lines at the Chinatown subway stop. The Gardens by the Bay encompasses 250 acres of parkland and is home to more than 250,000 rare plants housed in giant domed conservatories. Most of the park is open to the public free of charge although the two large domes require an entrance fee to enter. One of the domes is called the rain cloud and houses many species of orchids, anthurium, ferns and plants that enjoy tons of moisture. The second dome is much larger and is called the flower dome. The flower dome has multiple sections of plants representing different types of plants from desert climates to Mediterranean climates, etc. There is also a large area that changes with the seasons and is now featuring a huge Christmas display with a variety of trees, poinsettias and a large number of other species. Disney sponsors the holiday display and so there are many playful toys and characters in the display.

We explored both domes before heading outdoors to see the public gardens. Everything is immaculately maintained, beautifully clean and perfectly manicured. In the late afternoon we were back on the ship for a brief rest before taking a tour sponsored by our travel agent to the Night Safari. We traveled by bus to the north side of the island about a 45-minute drive. Once at the Night Safari we were escorted to a lovely glass walled room in the middle of the rain forest for cocktails and snacks prior to a buffet dinner. The buffet had a nice selection of salads, a carving station of roast beef, local fish, chicken, beef and seafood dishes and a table of desserts. The wine and beer kept flowing and everyone had a nice dinner indoors as it poured rain outdoors.

The Night Safari is set on 98 acres of dense secondary forest offering a unique experience to observe wildlife in a tropical jungle at night. By the time dinner was over and we boarded the open air trams, the rain had stopped allowing us to enjoy the safari. Each tram has a narrator as you are escorted through the jungle explaining a little about each of the animal enclosures. The lighting is strong enough to see the animals fairly well without disturbing them. We saw things like deer, hippos, tapirs, bears, lions and others. After the tram ride we had some time for shopping and to watch a fire show with four performers throwing and spitting fire. We returned to the ship and another immigration and security check about 10:00pm.