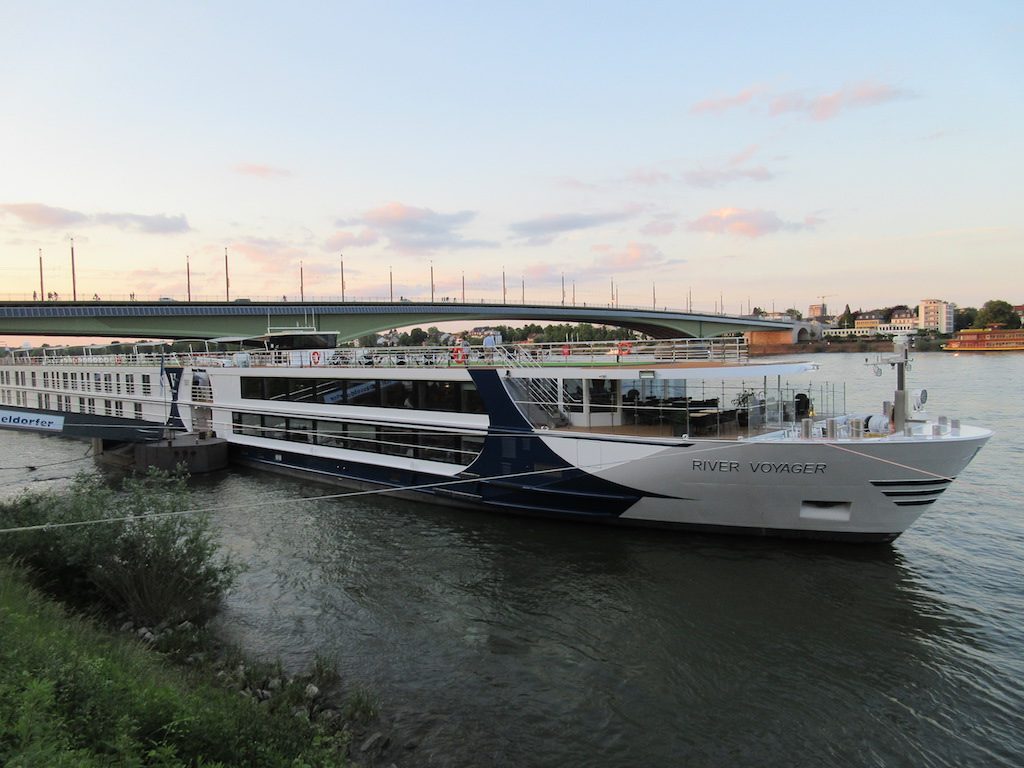 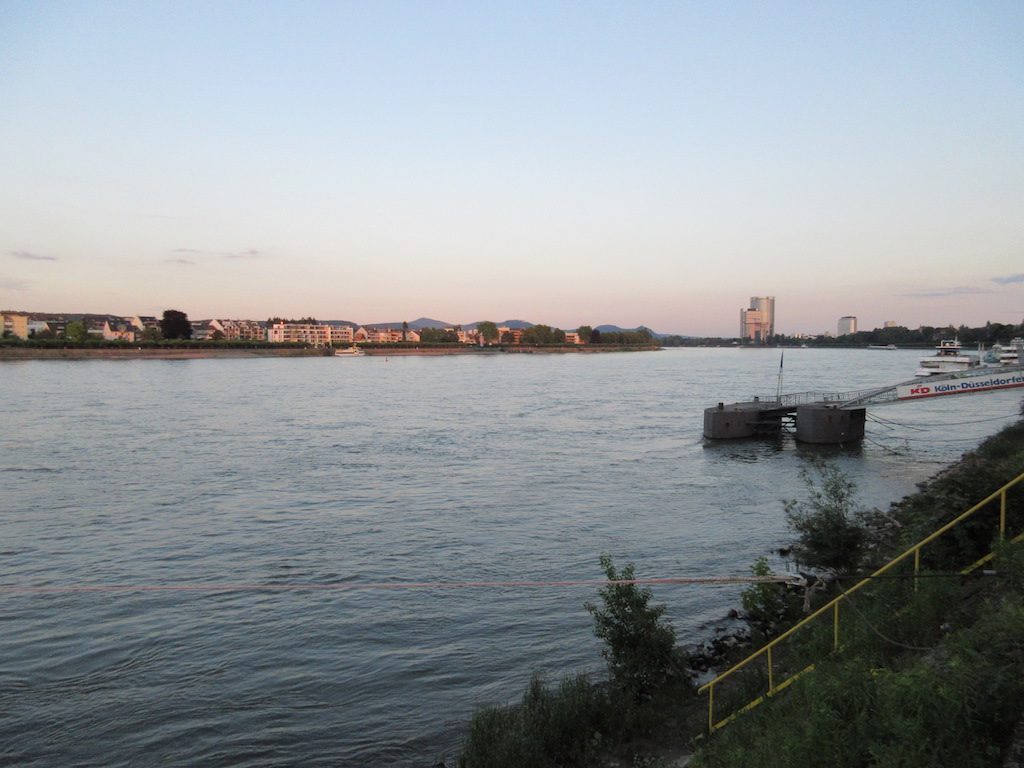 View from our ship looking south in Bonn. 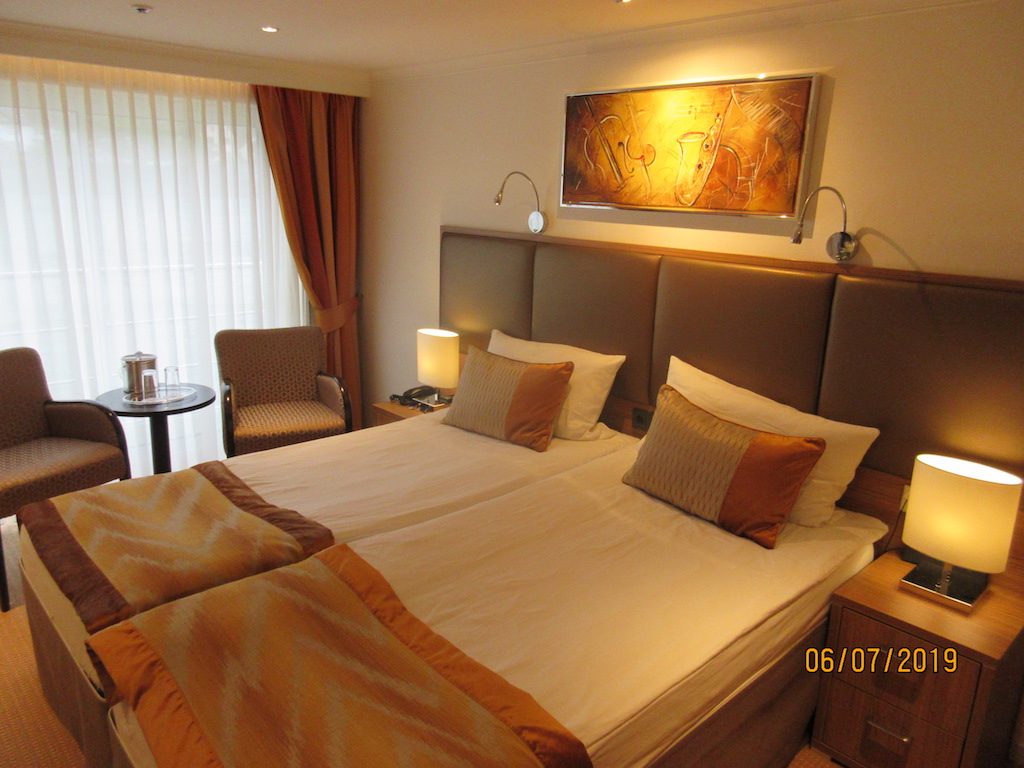 We arrived in Frankfurt about 10:55am local time after a nearly eleven-hour flight from Los Angeles and we were all exhausted. Once we cleared passport control we claimed our bags and found that Mark’s brand-new IT Bag had two broken wheels on it. Luckily there was no waiting at the Lufthansa baggage claim office where they agreed to compensate me with ninety Euros, the equivalent of about $100 US Dollars. The entire process took only a few minutes and we were on our way to meet the Vantage Travel representative. She informed us that we needed to wait for other guests arriving on other flights and we should make ourselves comfortable. The wait was fairly short until we were escorted some distance dragging our bags along with about 25 other guests to a bus parking lot adjacent to the airport. There we waiting for the bus for about 20 minutes before being taken through the lush green countryside to the city of Bonn to board our ship. The bus ride took nearly two-hours and most folks were so tired that the bus was a symphony of snores.

Our ship is called the ms River Voyager, built in 2016. The ship has a maximum capacity of 176 passengers and is nearly full.  Our cabin is #312 and Ric and Kevin are in cabin #325, located on the middle deck of three interior decks and is about 170 square feet in size. There is what they call a French balcony which is not really a balcony at all. Instead there is a sliding glass door that opens out to a railing several inches from the window. The finishes and style of the ship is very nice and the staff seems very friendly.

The middle deck houses a lovely restaurant called the Bourbon Street Bistro where all of our meals will be served. On the upper deck there is a large lounge called the Blue Note Lounge with a bar where daily activities, drinks and entertainment is performed. At the rear of the ship on deck three is a small dining room called the Cotton Club which offers a small buffet for lunch or a less formal dinner menu. The roof is called the Solaris Deck where you can enjoy the scenic sailing as well as a very small jogging track.

Bonn:The former capital of West Germany (1949—1990) and the official seat of government of the united Germany before the administrative offices moved to Berlin in 1999, Bonn’s roots can be traced back to Roman times.  Around 11 BC the Roman Army stationed a small unit in the city’s historic center — the Sterntor (star gate) in the center of town is a reconstruction using the last remnants of the medieval city wall.

Although no longer the capital of Germany, Bonn today is a major administrative center and has developed into a hub of international cooperation, particularly in the areas of the environment and sustainable development. A growing number of United Nations agencies are housed in Bonn’s former parliamentary quarter on the banks of the Rhine.

Major sights worth visiting in Bonn include Beethoven’s birthplace at Bonngasse, the Old Town Hall, an 18th-century rococo masterpiece located next to the market place, and the Kurfürstliches Schloss, a former palace of the prince-electors that today serves as the main building of the University of Bonn.

We were too exhausted to go out to explore the city but instead unpacked our bags and got settled into our new home. At 5:30pm we met in the lounge for a safety talk, orientation of the ship and met the captain and some of the crew who will be taking care of us onboard.

Dinner was served in the dining room at 6:30pm where we enjoyed a delicious four course dinner with unlimited wine, soft drinks and coffee. The food was excellent, the service was good and the portions were very reasonable. Ric and Kevin decided to take a walk after dinner while Kent and I caught up on emails and plans for Cologne the next day.