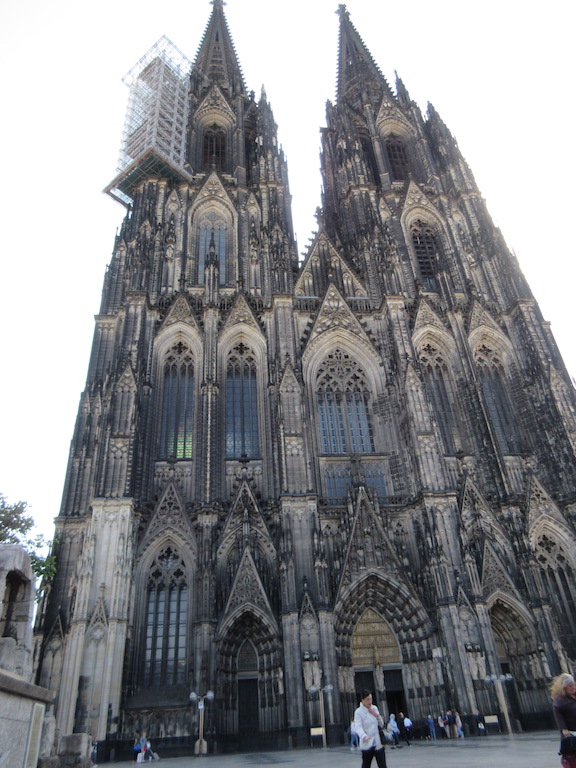 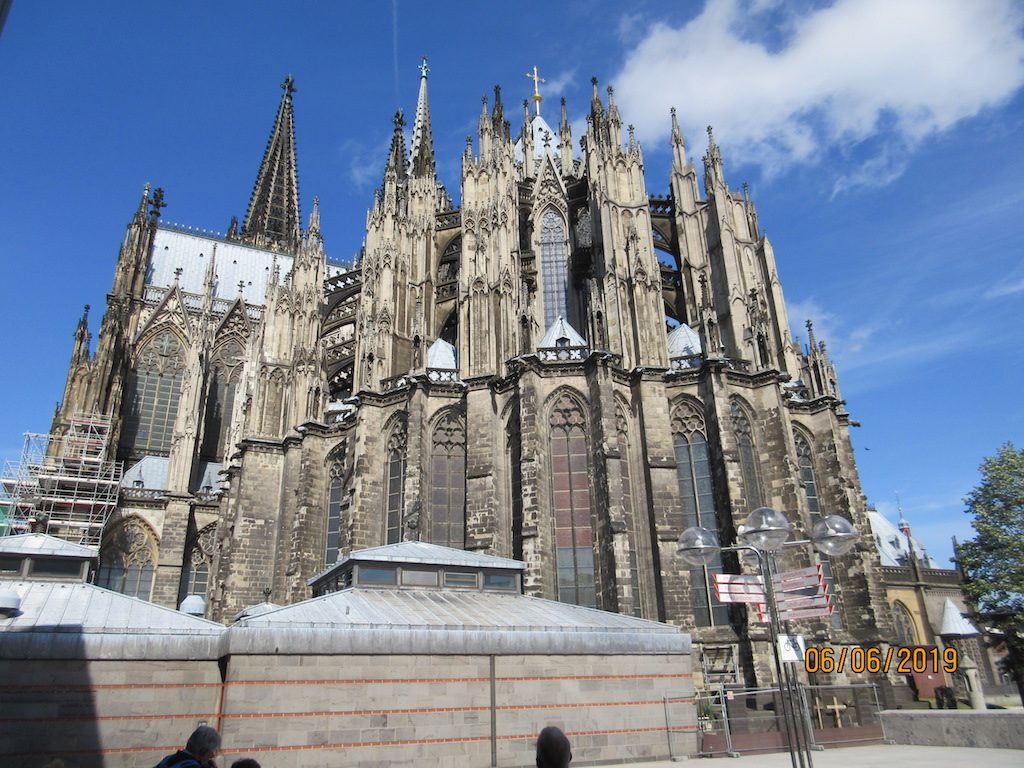 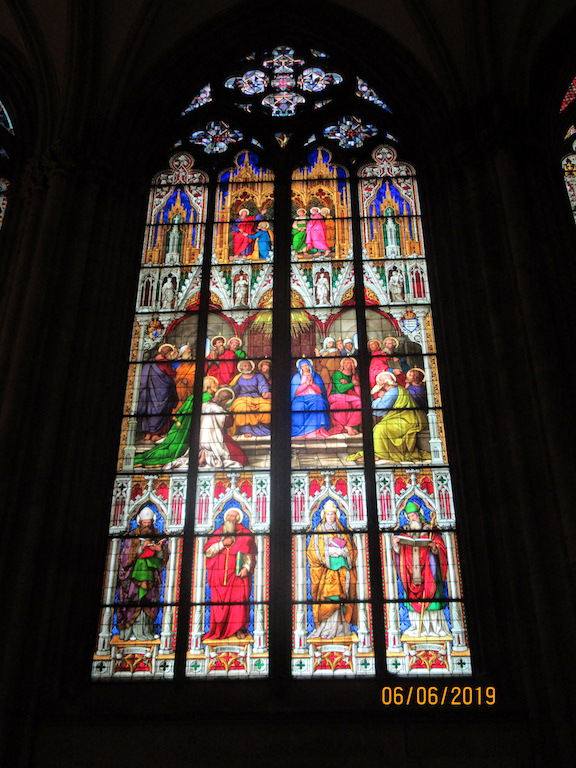 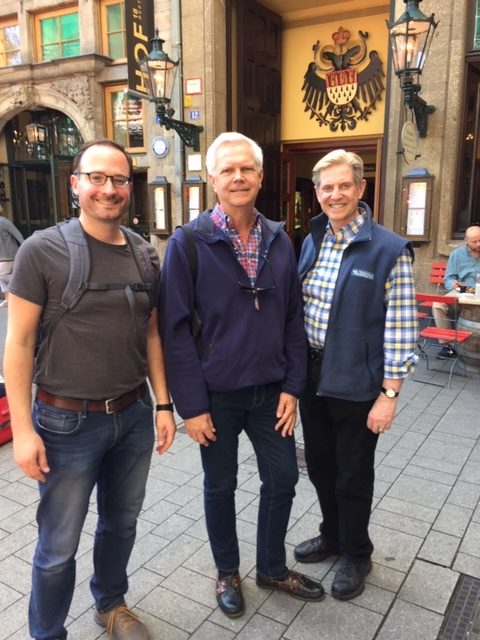 On this day we took a walking tour of the Historic town of Cologne and had a tasting of the local beer called Kolsch at the famous Fruh Brewery, only made here. Cologne is a significant railroad center and port of great commercial importance. Industry in Cologne varies from cars, textiles, pharmaceuticals, chocolate, and the perfume, eau de cologne.

Medieval Cologne was surrounded by walls and gates and characterized by a maze of narrow, crooked streets. In the mid 19th century, these walls were torn down and a circular boulevard, the Ring Strasse, was put in their place. The modern section of Cologne is found beyond the Ring Strasse. Interesting sights in Cologne include the university, founded in 1388, and the Cologne Cathedral, a gothic structure with twin spires, each 515 feet high, now designated a UNESCO World Heritage Site. The Cathedral was begun in 1248, but not completed until 1880. The structure was thoroughly restored after heavy damage during World War II. The most notable work in the cathedral is the Shrine of the Three Magi, a jewel-encrusted reliquary said to contain the bones of the three kings who followed the Christmas star to Bethlehem. Cologne Cathedral is also noted for its magnificent painted choir stalls and stained glass. The cathedral is a very busy place with tourists flocking in by the thousands.

Adjacent to the cathedral is the 4711 House of Fragrances where they have been creating unique fragrances since 1792. This is considered the original Eau de Cologne.

The first student (Jochen), whom Kent mentored at San Diego State University after he retired in 2005, took the train to Cologne to visit with us. Jochen’s family owns a cosmetics company about a two-hour train ride from Cologne. Jochen manages their online website and e-commerce. We had a nice afternoon with him walking the city and having lunch at an outdoor Italian café.

Back onboard the boat we enjoyed the captain’s welcome reception and six-course dinner in the dining room. Following dinner there was a short concert by a couple from a group called Klang Poesie. The program was a brief history of German songs from the 18th century to present day. The young man played the piano and they both sang a variety of songs.

Germany: Geography & Quick Facts
Germany is a land of contrasts, from the snow-capped Alps at its southern borders, to the low, rolling plains studded with fertile farms in the north. Its primary waterway is the Rhine, which flows through farmland and steep landscapes full of vineyards and castles. Cooler than much of the United States, the moist climate is ideal for growing the wheat, barley, and hops that make German beers distinct, as well as the grapes which produce its crisp white wines.
Area: 137, 846 square miles
Population: 82,329,000
Languages: German
Capital: Berlin
Ethnic groups: German, Turkish; minority populations include Greek, Italian, Polish, Russian, Serbo-Croatian, Spanish, Danish, and Sorbian (Slavic)
Religions: Protestant, Roman Catholic, Muslim

Germany History: Despite boasting a rich culture that includes figures like Goethe, Gutenberg, and Bach, Germany did not even exist until the 19th century. Instead, the German-speaking people lived on land divided into an ever-shifting roster of kingdoms, territories, principalities, fiefdoms, and unaligned cities grouped loosely under the auspices of the Holy Roman Empire.

When Martin Luther nailed his 95 Theses to the church door at Wittenberg in 1517, the principalities split into two main camps, some aligning with the Protestants and others with the Catholics. Religious division yielded a political one, with Protestant Prussians opposing Catholic Habsburgs. Tensions spawned the 30 Years War, which ruined Germany financially without yielding any clear single winner.

In the 18th and 19th centuries, the Kingdom of Prussia became a powerhouse, with a strong military and government, and some of the most liberal policies in Europe for members of its German Customs Union. Non-Prussian states formed their own consortium known as the German Confederation, which had more members but less power. In 1848, responding to the French revolution, Germans throughout both territories demanded reforms and the creation of a unified Assembly. Though no unification immediately followed, the revolutionary colors of black, red, and gold became symbols of the national ideal that would take decades to achieve.

As the 19th century drew to a close, Chancellor Otto von Bismarck’s defeat of Austrian and French forces led the Prussian Emperor to form the first true Germany in 1871. For such a young nation, Germany was audacious, immediately trying to acquire overseas colonies. This was a time of big cultural vision as well. The Brothers Grimm took Europe by storm with their fairy tales of lives lived in shaded woods and imposing towers (many still visible today). Composers like Strauss, Mahler, and Wagner revived Romanticism, their symphonies and operas filling the concert halls of Europe.

The luster was doomed to fade. World War I found the young empire on the wrong side of history, and the Treaty of Versailles led to its dismantling. In its place, the Wiemar Republic was established, but the new leaders faced a trio of complications – global depression, high inflation, and social unrest. Taken together, these conditions made the citizenry susceptible to the promises of the developing Nazi Party, which led to the well-documented horrors of World War II and the Holocaust. With the defeat of Germany, many of the cities which today are serene and prosperous were leveled by Allied bombing.

Post-war years found Germany once again broken up, though now under the administration of the United States, Britain, France, and the Soviet Union. The western portion of the country became the Federal Republic of Germany, with an assembly and expanded powers of self-governance. But in the east, the Communists subsumed all the dominant political parties into one Socialist Unity Party, creating a new Communist state: the German Democratic Republic.

The totalitarian nature of East Germany, as it was known in America, led millions to flee to the West. While West Germany blossomed into economic prosperity and world travelers began returning to its cities and scenic riverside towns, East Germany languished economically, its citizens suffering under the oppressive control of the Stasi military police.

The Berlin Wall became a potent symbol of the Cold War. When Gorbachev was making reforms in the Soviet Union in the late 1980’s, then-President Ronald Reagan famously told the premier to put his money where his mouth was, exhorting him to “Tear down that wall!” A year later, popular demands for the wall to come down were echoed by Gorbachev himself and the wall indeed was dismantled. By 1990, Germany was—for the second time in its 1,100-year history—unified as one country.

Now, after more than two decades of unity, Germany is a hub of commerce and activity, boasting some of the world’s most acclaimed museums, orchestras, and architecture. Both cutting edge and steeped in history, it is a nation whose glory days are not past but present.