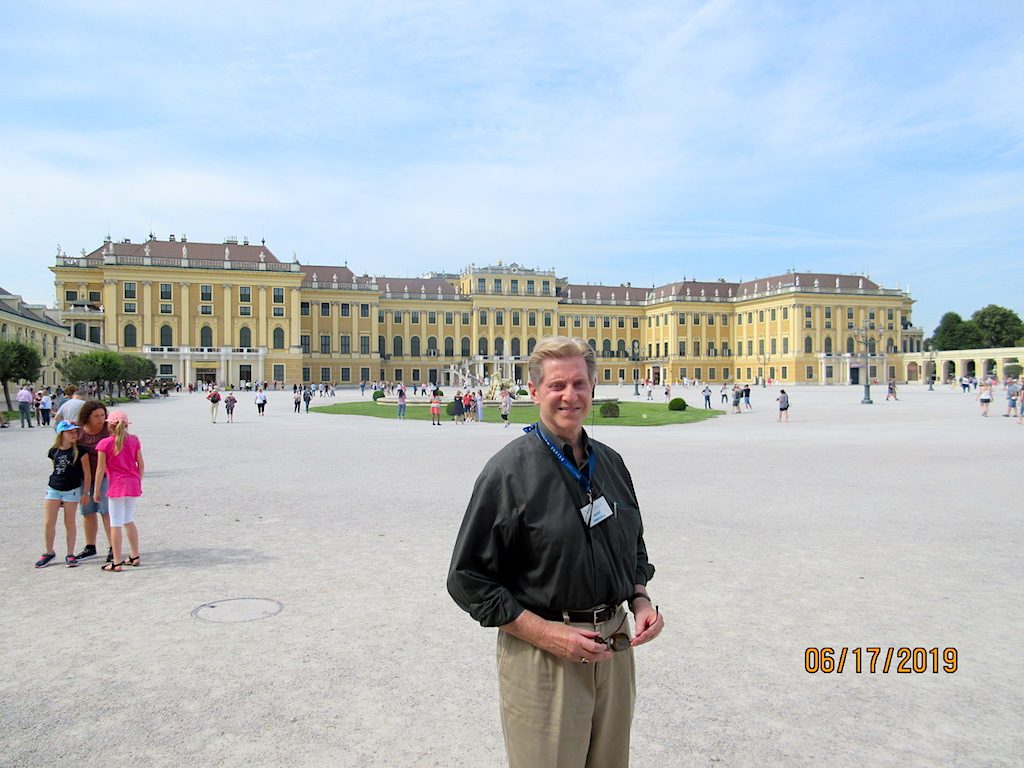 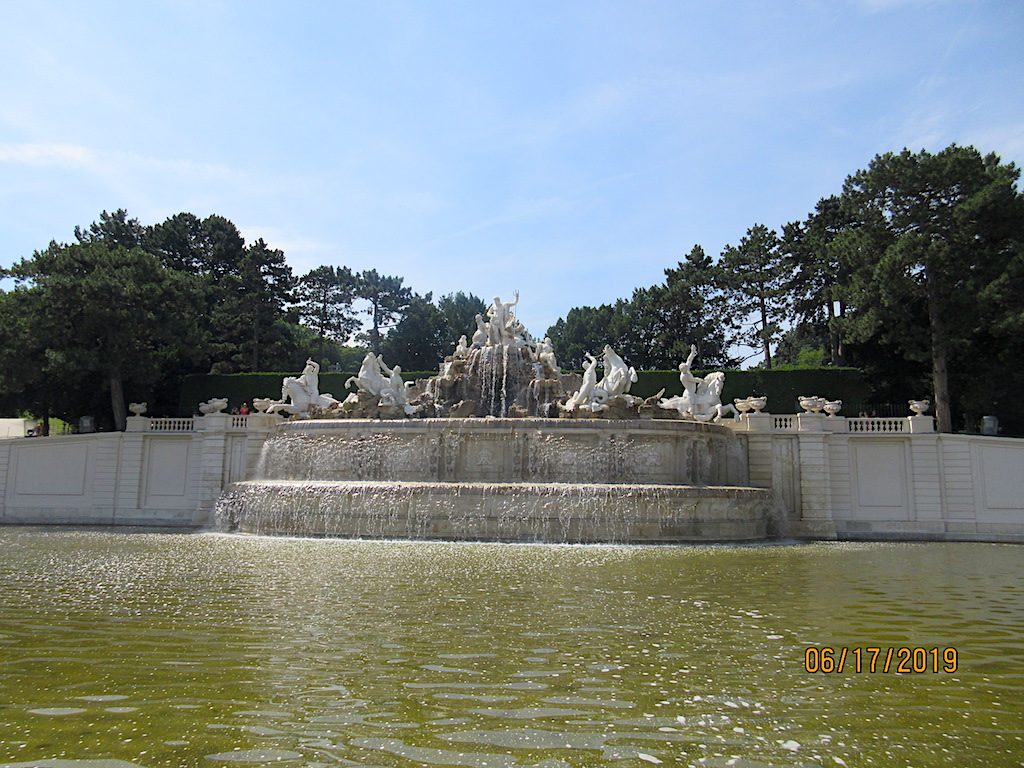 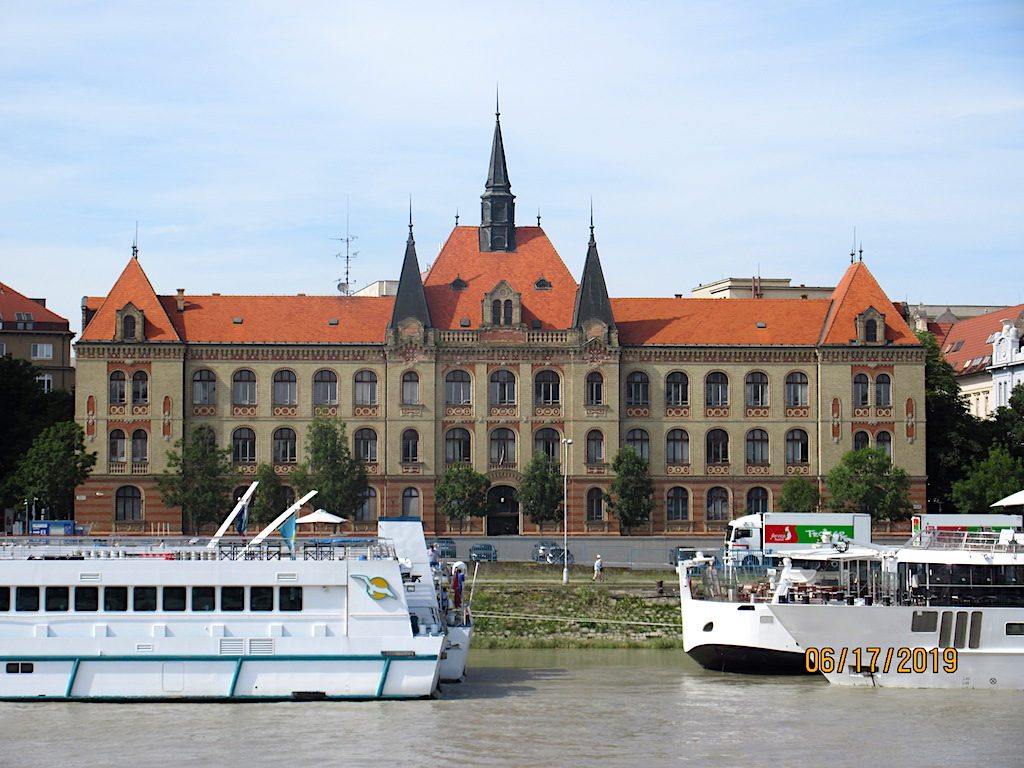 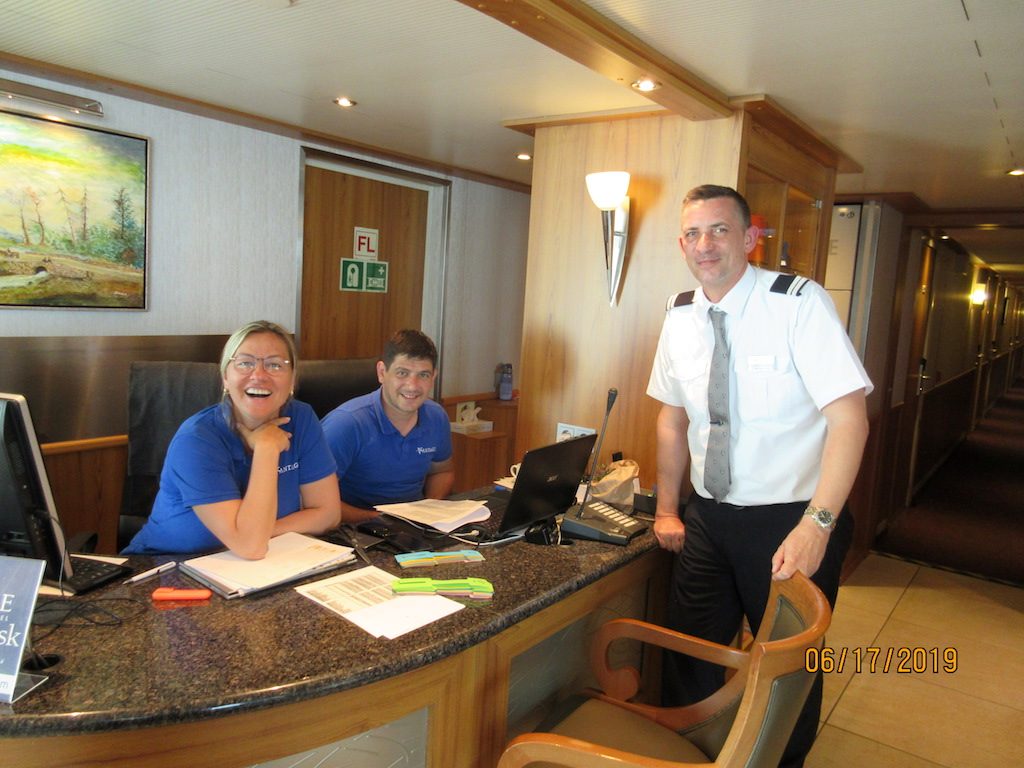 The Imperial Schönbrunn Castle, the former summer residence of the Habsburgs, has been compared to the palace at Versailles. At the end of the seventeenth century Emperor Leopold I commissioned the Baroque architect Johann Bernhard Fischer von Erlach, who had received his training in Rome, to design an imperial hunting lodge for his son, Crown Prince Joseph, later to become Emperor Joseph I. Replacing the chateau de plaisance built on this site for the dowager empress Eleanora of Gonzaga in 1642, it was to grow into a palatial imperial residence over the course of the eighteenth century. The palace today consists of 1,414 rooms, some of which can be rented by locals to live in, while others are part of the museum. The museum rooms are opulently furnished and they allow 11,000 tourists each day to tour the museum.

The palace grounds are extensive with planted beds, grass areas, elaborate fountains, a rose garden, a hedge maze and more. On the day we were at the palace they were preparing the garden for an annual classical music performance where they allow 80,000 residents to attend for free.

After lunch onboard, we spent the remainder of the afternoon sailing towards Budapest, Hungary on the ship’s top deck. We passed Bratislava, Slovakia, along the way, as well as many charming small towns. We enjoyed chatting with fellow passengers as we sailed.

The evening included the captain’s farewell cocktail party and dinner. For dinner we shared a table with our friends Ric and Kevin as well as four fellow guests, three of which reside in San Diego. Three of them are siblings, who grew up in New York, and one of their spouses.

Hungary: Geography & Quick Facts
Entirely landlocked, Hungary is a nation known for its rich, fertile soil, yielding not only centuries-old vineyards, but corn, wheat, barley, oats, and sunflowers (among others). The small nation, roughly the size of Indiana, is mostly low-lying, with its lowest point just two hundred feet above sea level and its highest peak in the Northern Hills only reaching an elevation of 3,000 feet. Bordered by Austria, Serbia & Montenegro, Croatia, Slovenia, Romania, the Ukraine, and Slovakia, Hungary is dotted with well-known lakes, but its most famous body of water is the Danube, which cuts through the nation’s open plains, linking its most historic ports and cities.
Area: 35, 910 square miles
Population: 10, 011,000
Languages: More than 98% Magyar
Capital: Budapest
Ethnic groups: Magyar, Romany, German, Serb, Slovak, Romanian
Religions: Roman Catholic, Calvinist, Lutheran, Greek Catholic, Jewish

Hungary History: Romans, Huns, Bulgarians—everyone desired the fertile land that would one day become Hungary. Inhabited as early as 9 B.C., the Carpathian Basin changed hands from empire to empire until the ninth century, when the Magyars claimed the region as their own, launching the true beginning of Hungarian history.

Within a century, the Christian realm boasted an operating government and a solid military, which backed the creation of a monarchy under King Stephen, who instituted Latin as the official language. More relevant cultural strides came from a later king, Andrew, who established the first constitution in continental Europe, followed by the creation of what would eventually become the Hungarian Parliament in the early 13th century.

Despite this strong leadership, nearly half the population died at the hands of Mongols in the Tatar invasion of 1241. The effect of the lost populace was muted somewhat by an influx of refugees, as King Béla IV allowed Mongol attack survivors from other countries to settle in Hungary permanently. When the Tatars moved on, the King had his men build hundreds of castles and forts so that the country would never again be caught off guard.

Over the centuries, while keeping the Ottomans at bay, Hungary took a bold new step, electing a non-royal to the throne. Unrelated to any member of the dynasty which had ruled for centuries, King Matthias was a scholar who maintained the second largest library in Europe (behind only the Vatican). But he also proved his military prowess, defeating the Ottomans, Germans, and Polish.

After Matthias, things turned bleak, with Ottomans defeating government forces and splitting the land. From the mid-16th century to the end of the 17th, there were three Hungary’s: Habsburg-ruled Royal Hungary, and the two Ottoman territories of Transylvania and Buda. By the 18th century, the region was reunited under Austrian-Habsburg rule, but its character changed again as Slavs, Slovenians, Romanians, and Germans were allowed to settle in the territory as well. These continual additions of ethnically diverse populations came to define Hungary as a “melting pot”—or perhaps goulash—of cultures.

Hungary became a hotbed of populism in the 1820’s when Count István Széchenyi pushed the Emperor to convene the Parliament, which undertook economic reform, including provisions for the needs of the poor. When the Habsburg rulers resisted, the citizenry deposed them, dramatically reshaping the values and identity of their nation. Hungary’s new government enacted the first laws of minority rights in the entire world—a bold move which prompted the Habsburgs to team up with the Russians to crush the revolution and assume power once again.

For 50 years, the nation was ruled as part of the so-called “Dual Monarchy” of Austria-Hungary. During this time, the economy boomed. Buda, the old capital, and bustling Pest, its neighbor across the Danube, officially united into the metropolis of Budapest that we know today. But the First World War took its toll; upon its end, Hungary gained independence from Austria, but lost nearly ¾ of its original territory, leaving more ethnic Hungarians living on non-Hungarian soil than within its reconfigured borders.

The new Hungary remained a Parliamentary Democracy in name, but the encroachment of the Nazis tempered any true freedom. Though Hungary was aligned with the Nazis at the beginning of World War II, the nation secretly tried to surrender to the Allies. When that pact failed and the Germans discovered it, the Nazis took firm control over the Hungarian government. But this did not quell the Hungarian spirit; during this time, thousands of Hungarians hid Jews or helped transport them to freedom. The decade of Soviet Rule after the war proved a brutal period that included a failed uprising in 1956 and massive loss of life. It would be more than 30 years before Communist rule ended after a bloodless political revolution.

Today, Hungary thrives, and its diverse, democracy-loving citizens invite travelers to discover the natural beauty of their land and the many stunning monuments of a truly enduring culture.