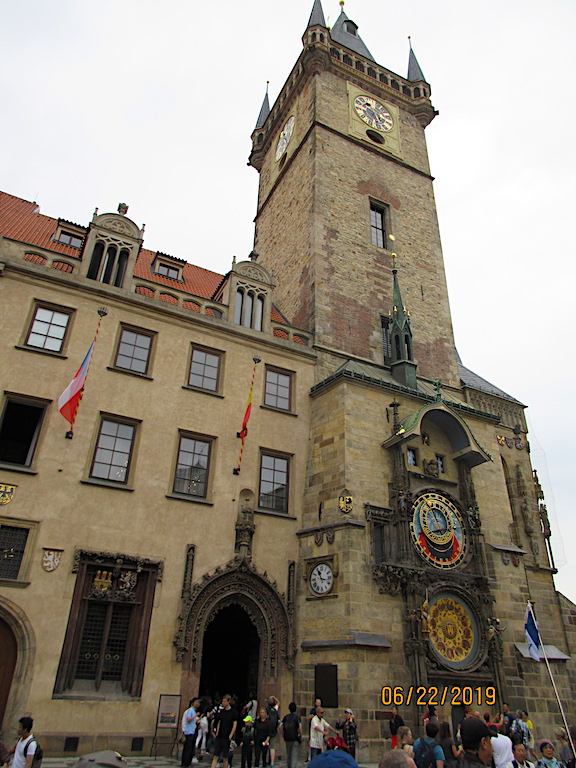 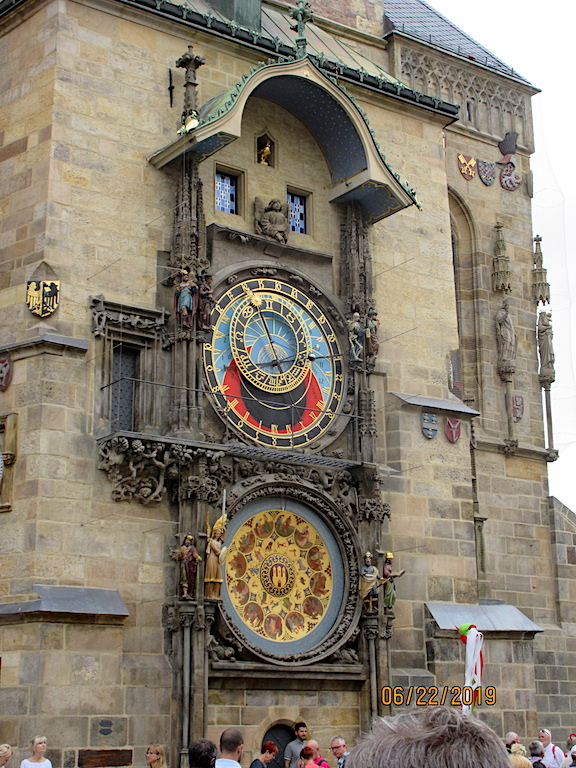 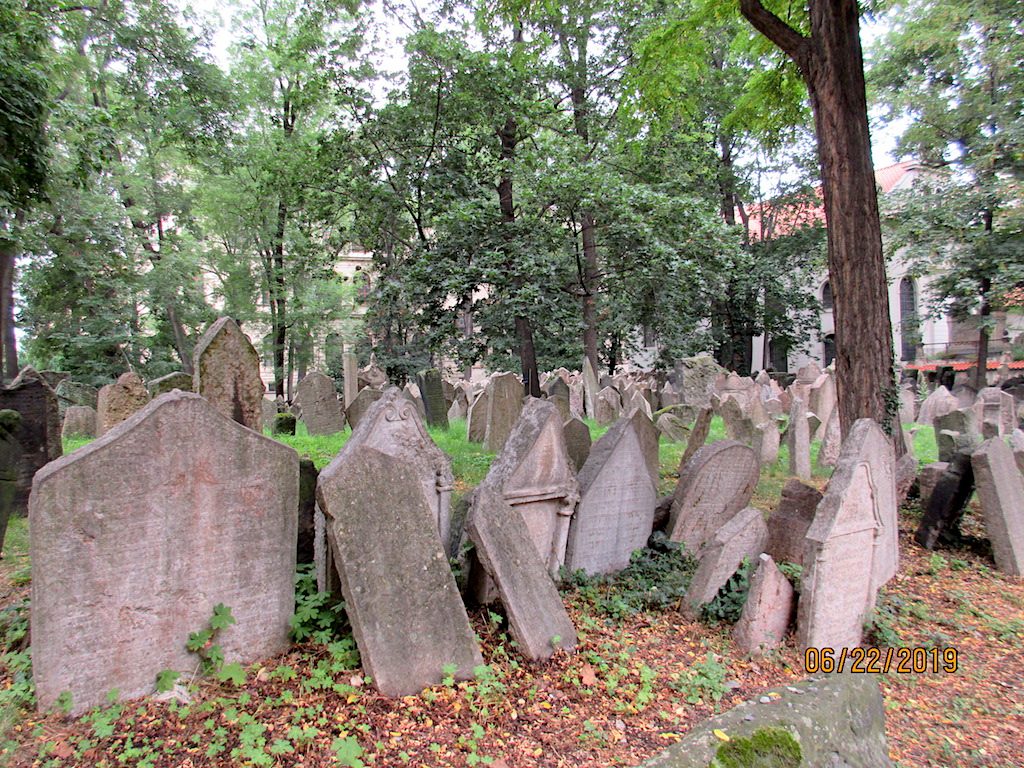 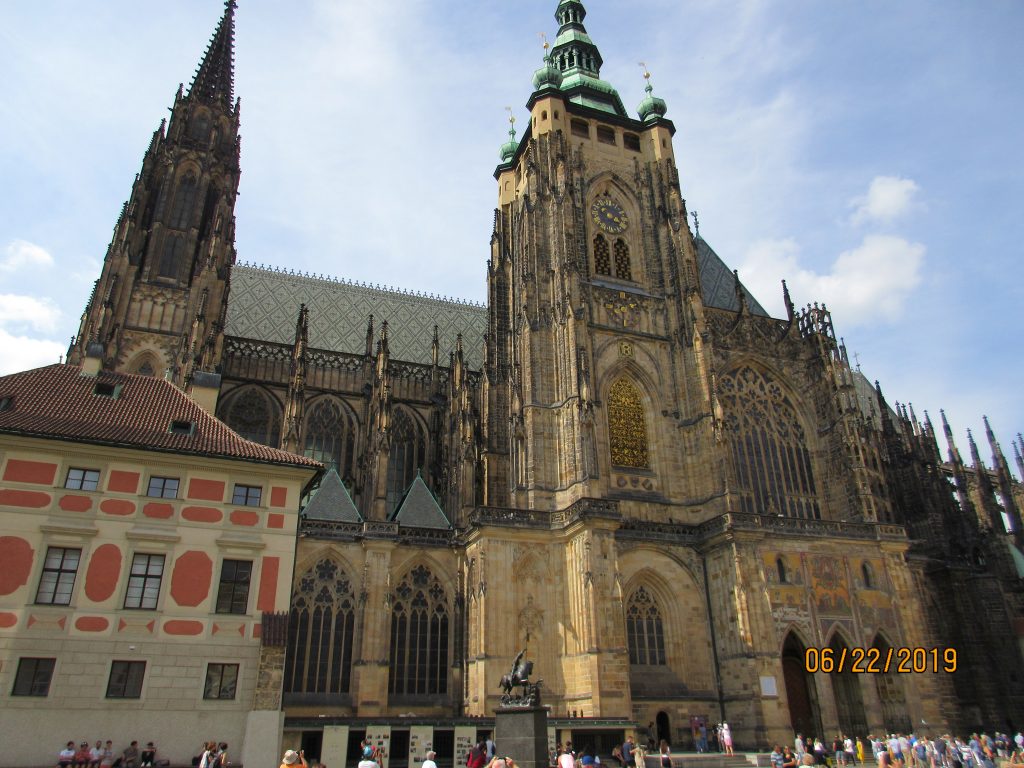 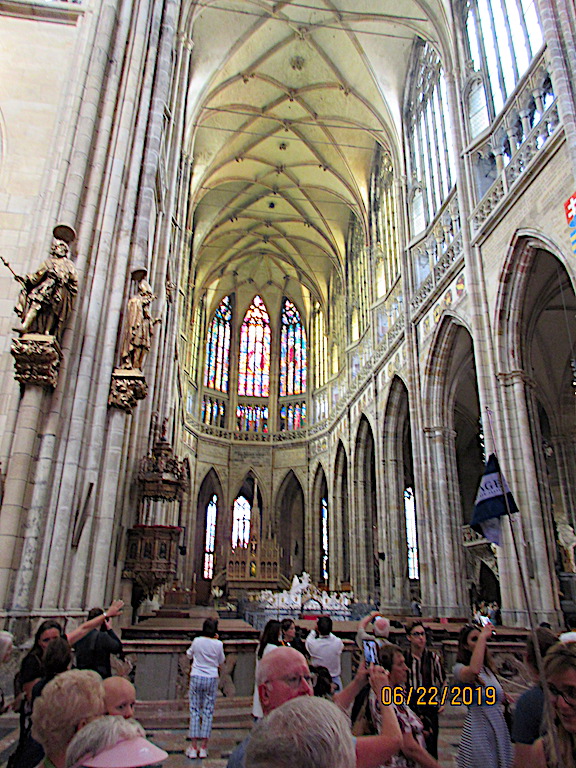 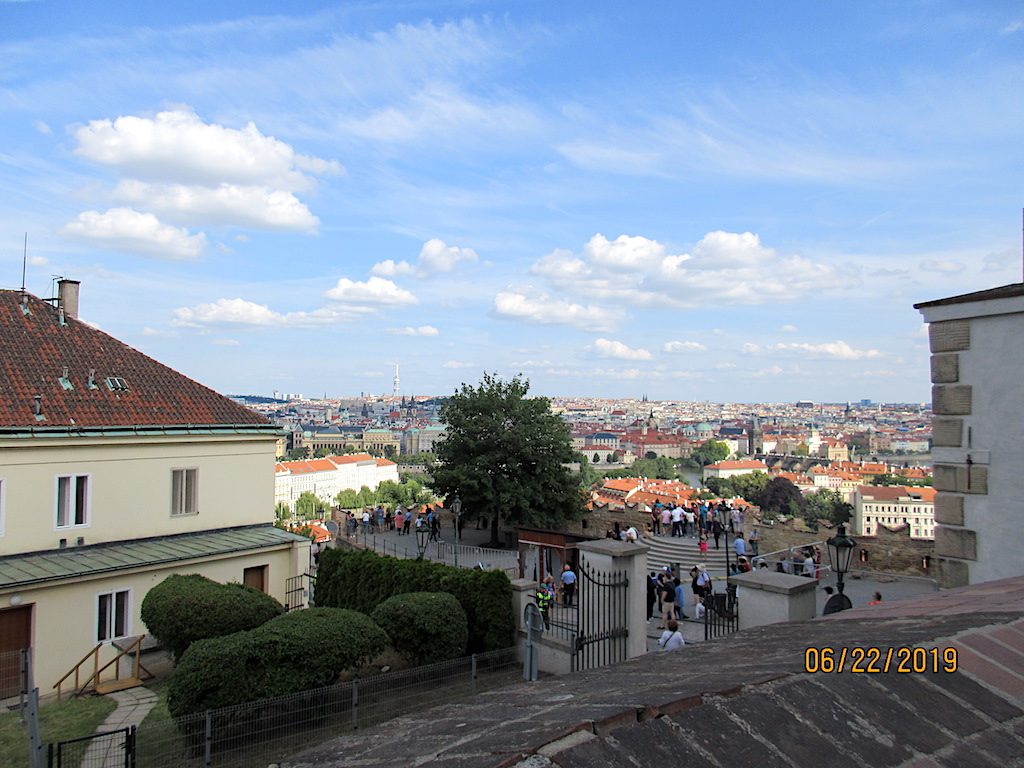 Prague-Sprawling City View from the Castle

We had a bus and walking tour of Prague this morning to orient us to the city including the famous Old Town, New Town (Think 300 years old) and the Jewish Quarter. One of the most beautiful and best-preserved cities in Central Europe, Prague is called “the Golden City” and “the City of 1,000 Spires,” both fine testaments to the abundance of gilded churches that punctuate every square. Picturesquely situated on the banks of the Vltava River, Prague has played an important part in the history of Europe, while somehow managing to avoid being overrun and destroyed as have so many of its neighbors. There is magnificent gothic, baroque, and Romanesque architecture throughout the city.

We explored the shore along the river including the ornately decorated Charles Bridge, completed at the beginning of the 15th century. On either end of the bridge stands an elaborate gatehouse and while crossing the bridge you find many baroque style statues of Saints. The 2,037-foot-long bridge was used to connect Prague Castle to the city’s Old Town. It is very popular with tourists, of which there were many!

Once we reached the Old Town Square, we stopped to admire the medieval astronomical clock located on the town hall. The clock was installed back in 1410, making it the third-oldest astronomical clock in the world and the oldest clock still operating. The clock has three main components: the astronomical dial representing the position of the sun and the moon in the sky; statues of various Catholic Saints stand on either side of the clock; “The Walk of the Apostles” where figures of the apostles are moving sculptures-notably a figure of Death striking the time; and a calendar dial with medallions representing the months.

Our next stop was at the Maisal Synagogue in the former Prague Jewish Quarter. It was originally built about 1592, although it has gone through many alterations over the years. Behind the synagogue is a Jewish Cemetery which is one of the largest of its kind in Europe. Renowned personalities of the Jewish community were buried here from the middle of the 15th century to about 1787. Due to a lack of space, new levels of soil continued to be added to the top of the existing cemetery until there were as many as twelve layers of graves in the cemetery. The gravestones were often covered over or moved up as the soil was added so that today there is a sea of headstones.

After our morning tour we were given a break to explore the town further and to have lunch on our own. We found a small local restaurant and bar where we could have a bite to eat and rest up for our afternoon tour. At the restaurant was a bachelor party (Or Stag Party) like several we had seen the night before. The groom’s friends dress up in formal wear or fancy sports coats, while they dress the groom in drag for the festivities. This group of men were dressed in outrageous printed fabric suits in wild colors with unique shirts including metallic silver. The groom was dressed in a bridal dress with a wig and makeup. Last night we saw a group of men all dressed in black slacks, white shirts, black suspenders and bow ties with their “bride.” Not sure where this tradition began, but leave it to say there is usually plenty for all to drink.

In the afternoon we toured inside the Prague Castle, dating back to the 9th century, now the official residence of the President of Czech Republic. The castle was a seat of power for Kings of Bohemia, Holy Roman Emperors, and presidents of Czechoslovakia. The Bohemian Crown Jewels are kept in a hidden room inside the castles church.

We visited several churches within the Castle grounds including one, originally begun in the year 870 as the Church of Virgin Mary. Over the years many kings, rulers and even the Habsburgs added and remodeled the property. Having such a long and sorted history, the castle has virtually every architectural style present. The castle today is enormous, occupying an area of almost 750,000 square feet or more than 17 acres. It is one of the most visited tourist attractions in Prague with over 1.8 million visitors annually.

Inside the castle there are several museums, including the National Gallery, a Toy Museum, a museum of Czech History. The Summer Shakespeare Festival takes place here. In addition to the castle structure there are also many lovely gardens including the Royal Garden dating back to 1540. Unfortunately, we did not have time to take in all of the things to see.

For dinner we ate at the first Indian Restaurant in Prague and it has been around since 1978. The food was good but the service was poor. One waiter for about ten tables of people.