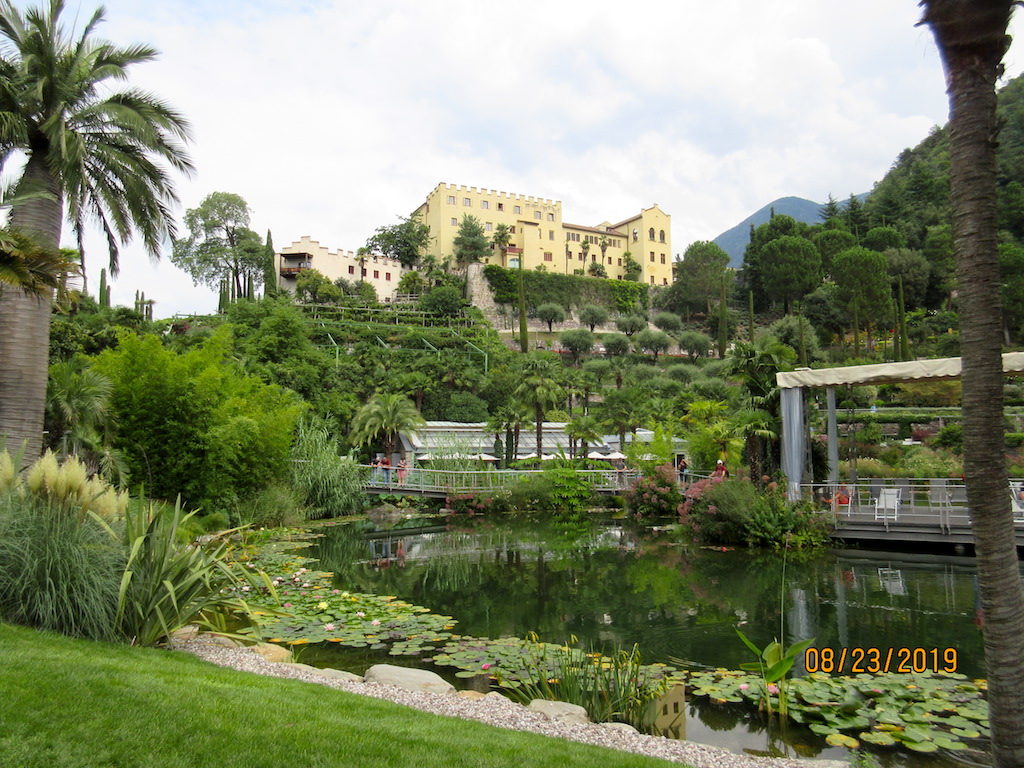 Gardens of Trauttmansdorff with castle in the background 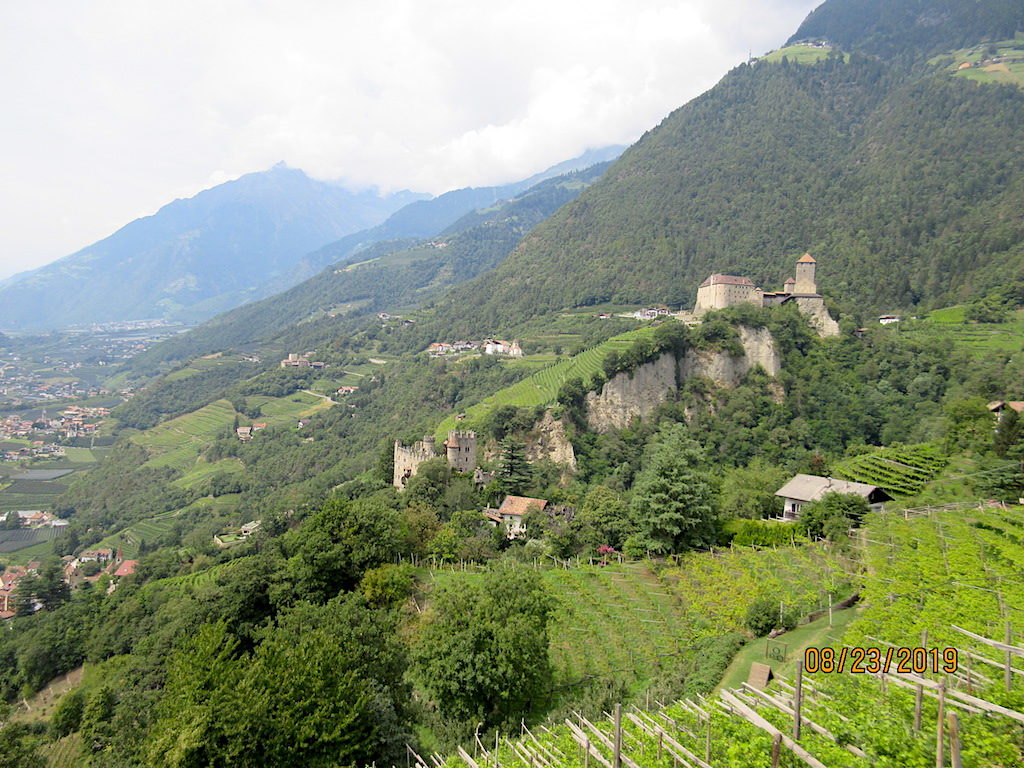 Brunnenburg Castle in the center of the photo 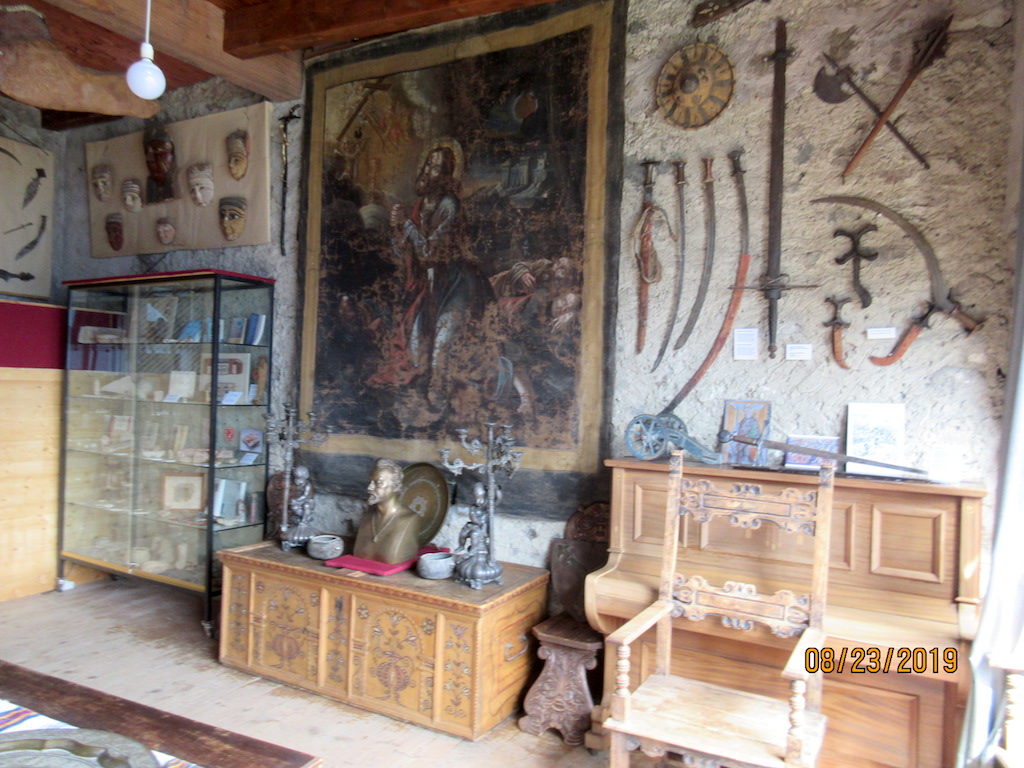 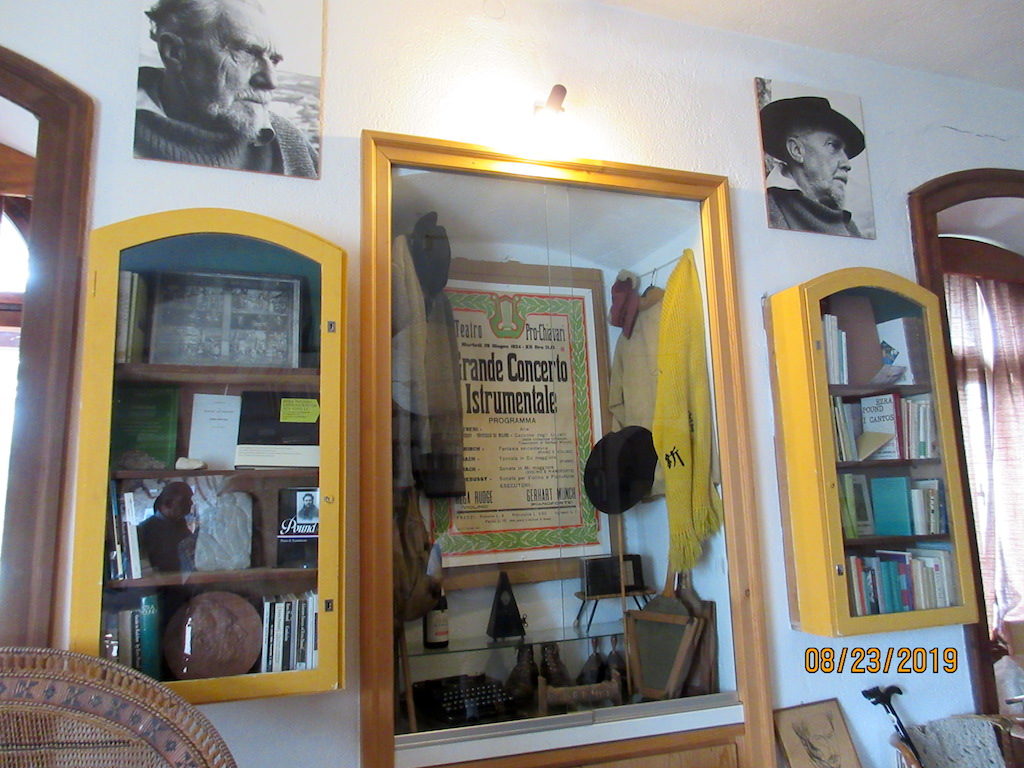 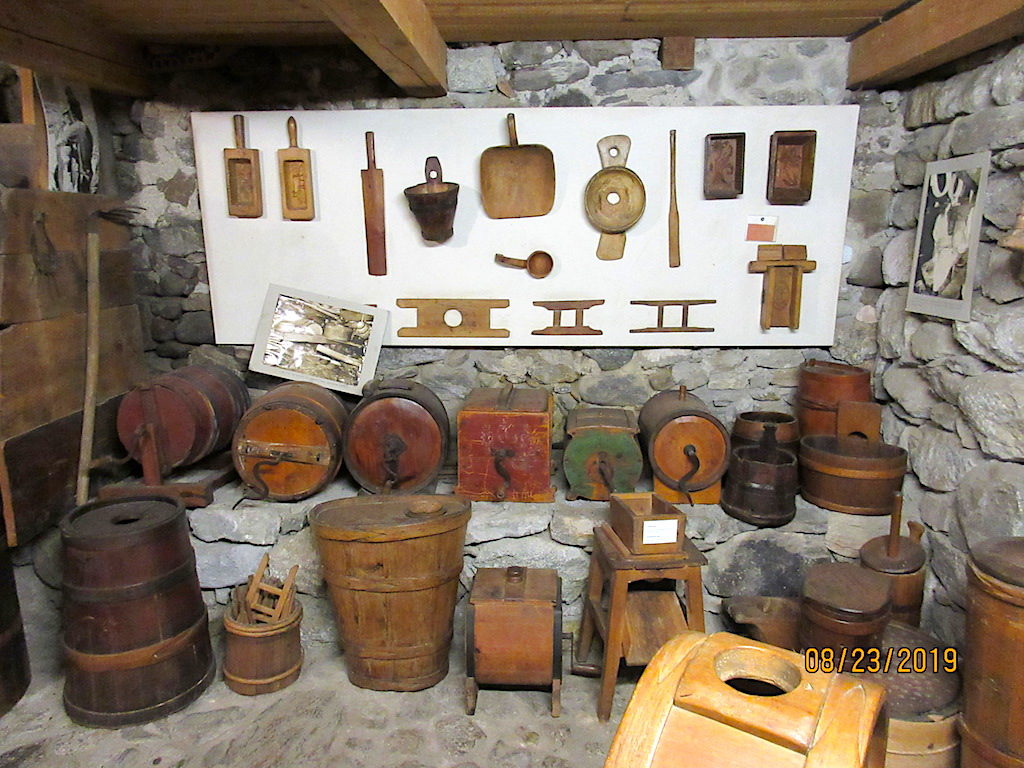 On this day we headed out about 8:30am for the Gondola to take us down the mountain to Bolzano and the train station. From the Gondola it is about a ten-minute walk to the train station where we boarded a train to the town of Merano. Merano is a lovely 35-minute train ride to the northwest of Bolzano though apple country.

Since 1969 they have been growing apples using a slender spindle system of high-density planting. The apple trees are planted in neat rows about 36” apart and about 8-12 feet tall. The apple trees resemble more of a column than a tree with clusters of apples from the ground to the top of the column. This new system of growing reduced labor by about 10% and increased production yields by 28%. We saw mile after mile of apple fields growing green, red and multi-colored apples. It was time to harvest the apples so many fields had people in the fields picking the apples.

Once we reached Merano we took a local bus to the Gardens of Trauttmansdorf Castle. The castle was once the holiday residence of Empress Elisabeth (Sisi) of Austria back in the late 1800’s. Inside the coach house they had an exhibition on Killer Plants referring to the carnivore plants like the Venus fly trap. In the old castle they have a large exhibit on the history of tourism in the area. Merano is known for its mild Mediterranean climate and hot springs. People would come from the colder north to escape the cold and enjoy the mild weather beginning in the 1800’s. Wealthy people began building large stately homes in the area and the city has grown to about 400,000 people today.

In the main castle complex there is also a small exhibit on Empress Elisabeth (Sisi) and the time she spent there. The rooms of the castle have old frescoes on the walls, painted ceilings and greats views of the area.

The Trauttmansdorff Castle includes a large botanical garden with a lake, restaurants, a palm beach and even a cactus garden. At this time of year, the gardens are filled with colorful lavender, water lilies and perennials. In spring time, the gardens are filled with blooming rhododendrons, Japanese Cherry blossoms and 200,000 tulips. After touring the castle, we enjoyed lunch at one of the restaurants along the lakeshore.

We took a taxi from the Castle to a small village by the name of Dorf Tyrol where we visited a Brunnenburg Castle owned by the daughter of the great American poet Ezra Pound and her son Siegfried Rachewiltz. Today the castle is partially open as a museum and also the private residence for four generations of the family.

Ezra Pound’s daughter, Mary de Rachewiltz, now 94, is the daughter of violinist Olga Rudge who was his mistress and not his wife. Mary says that her mother wanted a son from her father but that her father did not want any children. Her mother succeeded, only that a daughter was born, and for her, it was such a shock that she didn’t want Mary. Mary was entrusted to a Tyrolean nurse, with whom she lived until she was 10-years-old. Ezra Pound was linked to fascism and appreciated Mussolini and spent thirteen years in a mental hospital in America as a traitor to his country. After his hospitalization he returned to Italy and spent many years here.

Inside the castle there are several rooms dedicated to the history and relics of Ezra Pound. The grandson has also built a museum filled with historical items from the area. The items include farm implements, blacksmith items, felt making items, bread making items, wine making items, cheese making items and more.

We were taken on a tour of portions of the castle like the rooms dedicated to Ezra Pound, the private residence filled with books, art, papers and memorabilia, the museum and the wine cellar. It was all very interesting.

After our tour we walked back into town where we enjoyed drinks and apple strudel before heading back to our hotel via bus, train and gondola. It was a long day but very enjoyable. After dinner went to our rooms to recuperate.