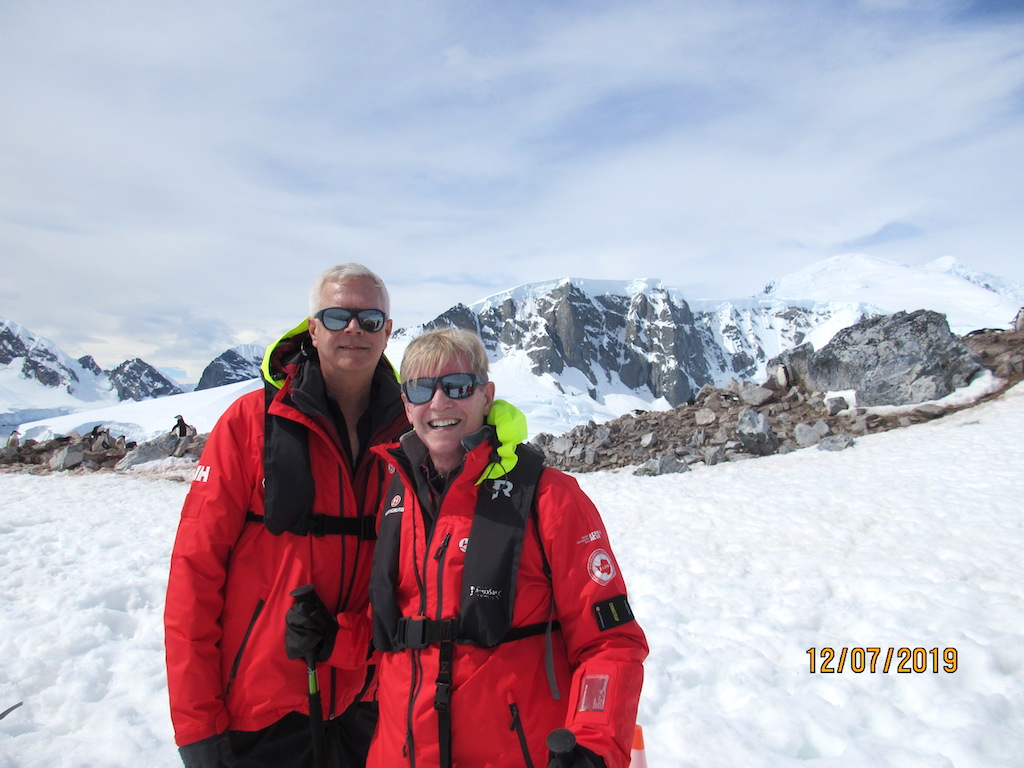 Kent and Mark in Orne Harbor 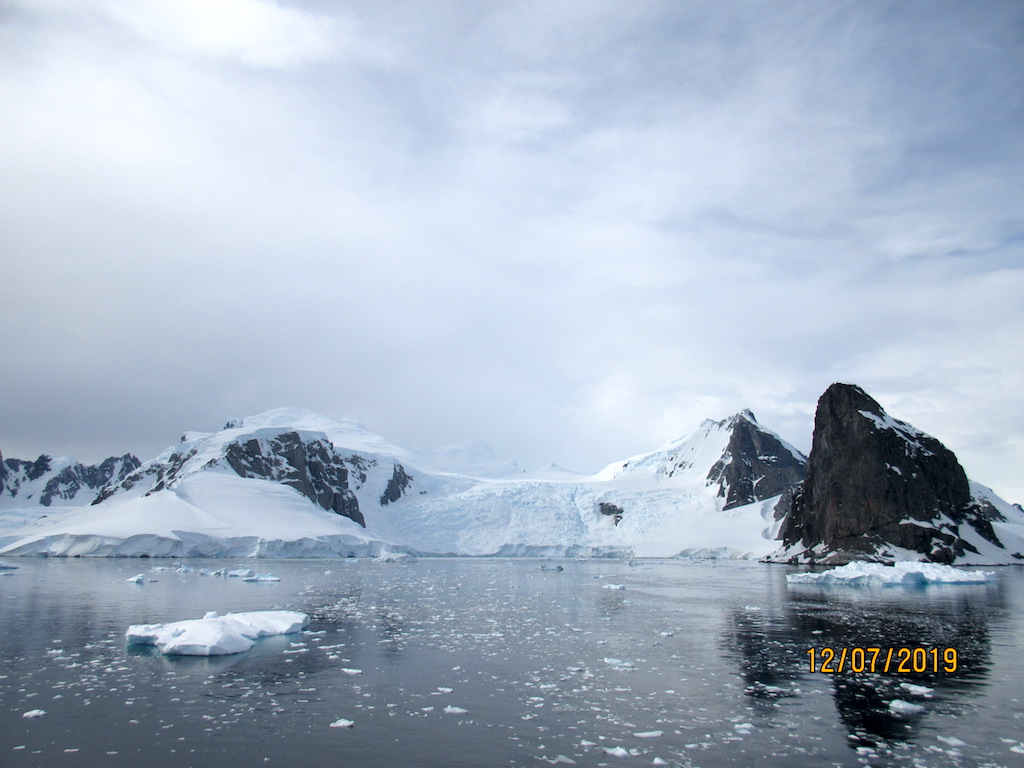 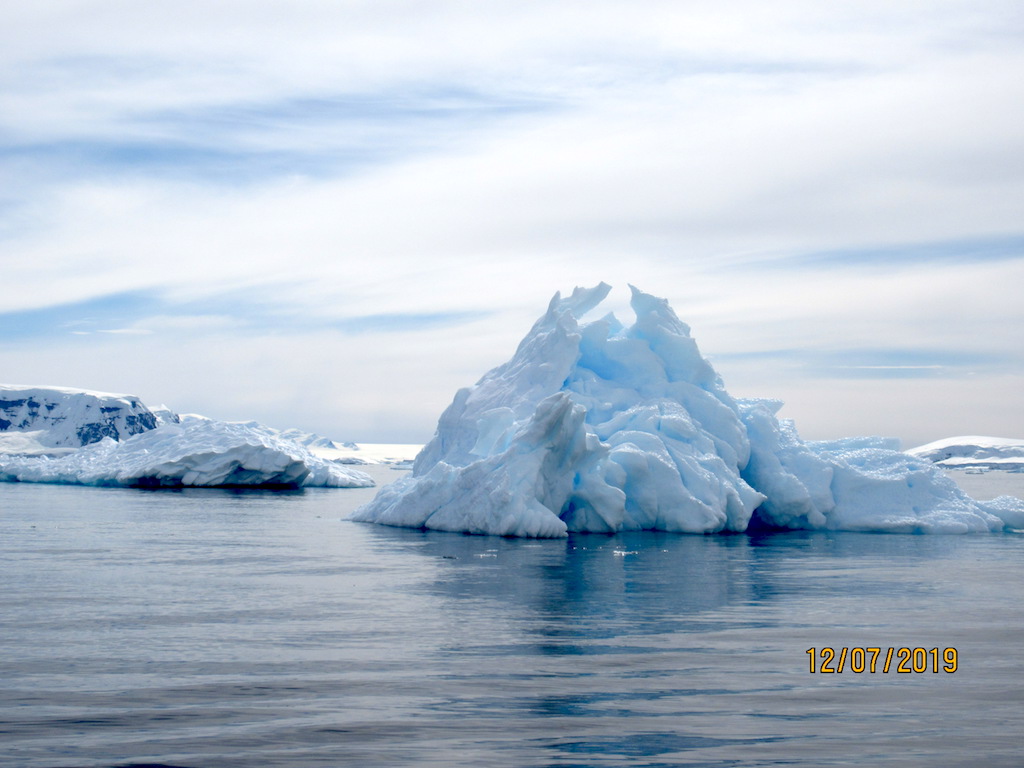 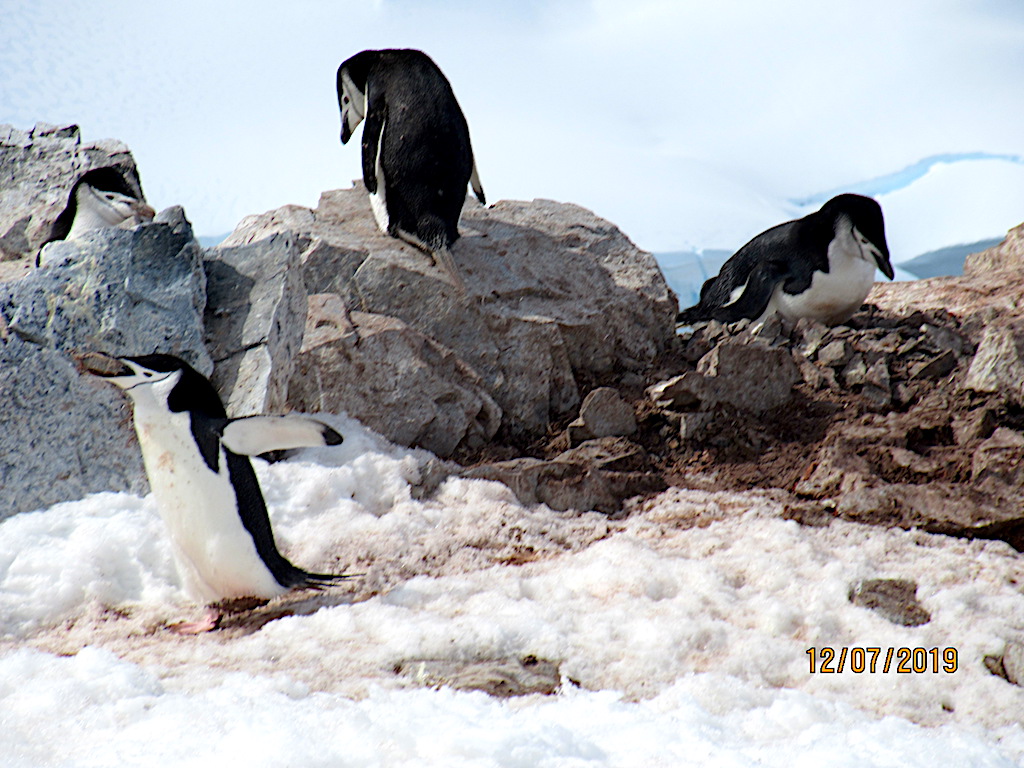 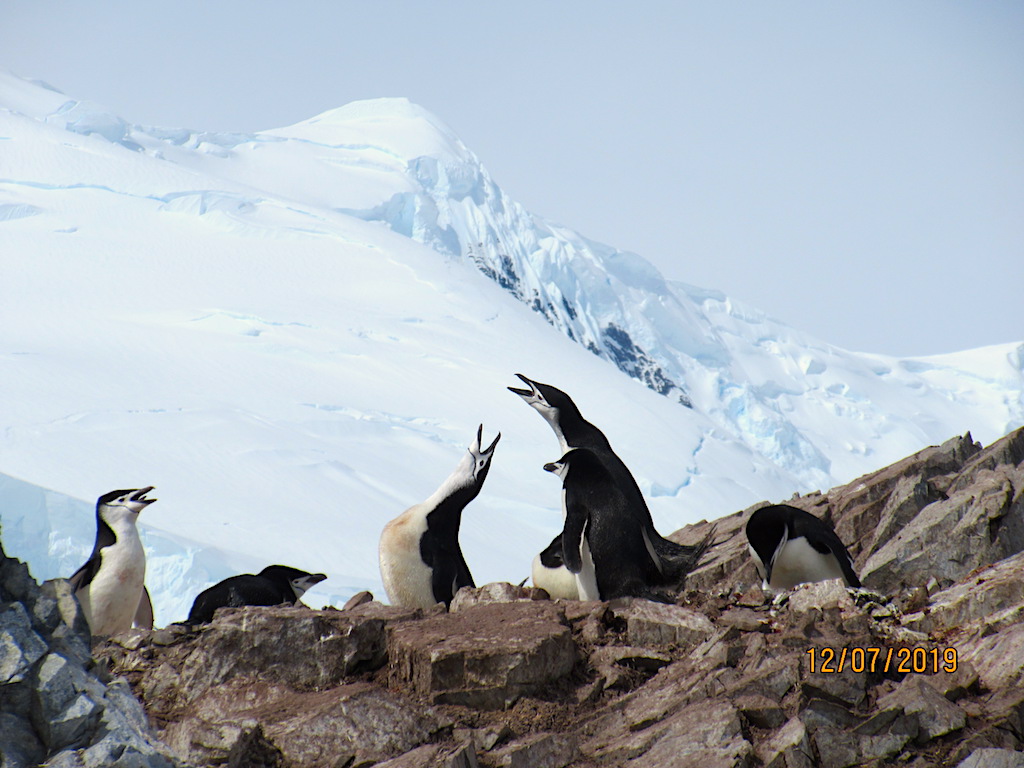 On this day we arrived at Orne Harbor on the western side of mainland Antarctica about 7:00am for a day of exploration. The harbor is about one mile wide and was filled with many floating pieces of ice. The skies were partly cloudy, it was dry and the temperature was just a little above freezing.

At 11:30am we headed out for a bit of a strenuous hike on shore. We had to climb up a switch-back trail to the top of a ridge about 1,000 feet above sea level. The expedition team had come along before us and created a trail for us to follow, well-marked with red flags and cones. They had plenty of walking sticks for everyone to use during the climb. Many folks chose not to climb to the top but we persevered and reached the summit. Once we reached the top of the hill we followed the ridge to a Chinstrap penguin colony. The penguins were busy building rock nests, stealing the neighbor’s rocks and squawking at each other. The smell of poop was not particularly pleasant but not as bad as it might have been.

The climb was treacherous enough that Kent fell multiple times on the walk up and the walk back down was even more treacherous. Kent lost his balance on the snow regularly and would end up falling. At one point he fell and began to slide down the slope towards the rocky bay below. Several crew members came running for him and telling him to put his legs in front of himself and to stop himself from sliding further. Once he stopped himself, the crew assisted him in getting the rest of the way down the hill to the tender boat for the return journey to the ship. All in all, we were out on the excursion for about 2.5 hours.

After a short break we bundled ourselves up again for an afternoon boat ride around the area. We spent about 75 minutes on one of the tender boats exploring the floating icebergs and area glaciers. It was like going to a sculpture garden with each ice berg like a unique piece of sculpture. Sometimes we would find penguins floating along on top of icebergs. The glaciers have crevices and cracks that appear very blue in color from the reflection of light from the water and sky. The glare from all of the water and ice would have been overwhelming if not for the polarized sunglasses we had. The glasses discolored some of the scenery and made it look almost like twilight at times but at least you could see everything with ease.

After our cruise we stopped on the eighth-floor bar where every afternoon they serve soup, cookies, cakes and fruits, along with coffee and tea. On this day the soup was a potato and leek soup that was very buttery and tasty. The cookies are small and very crispy but we are always able to eat them. They also put out an assortment of small squares of cakes.

After dinner we departed our position and several Humpback whales were spotted along the way. More visible are the penguins who seem to be traveling in every direction jumping out of the water as they travel.