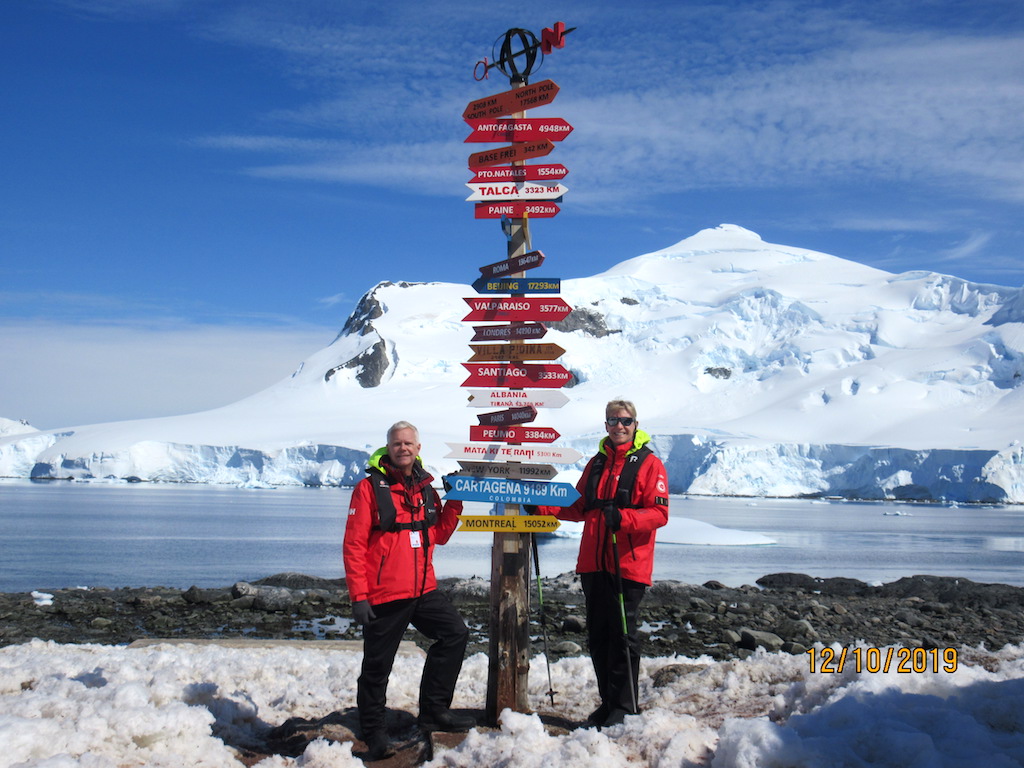 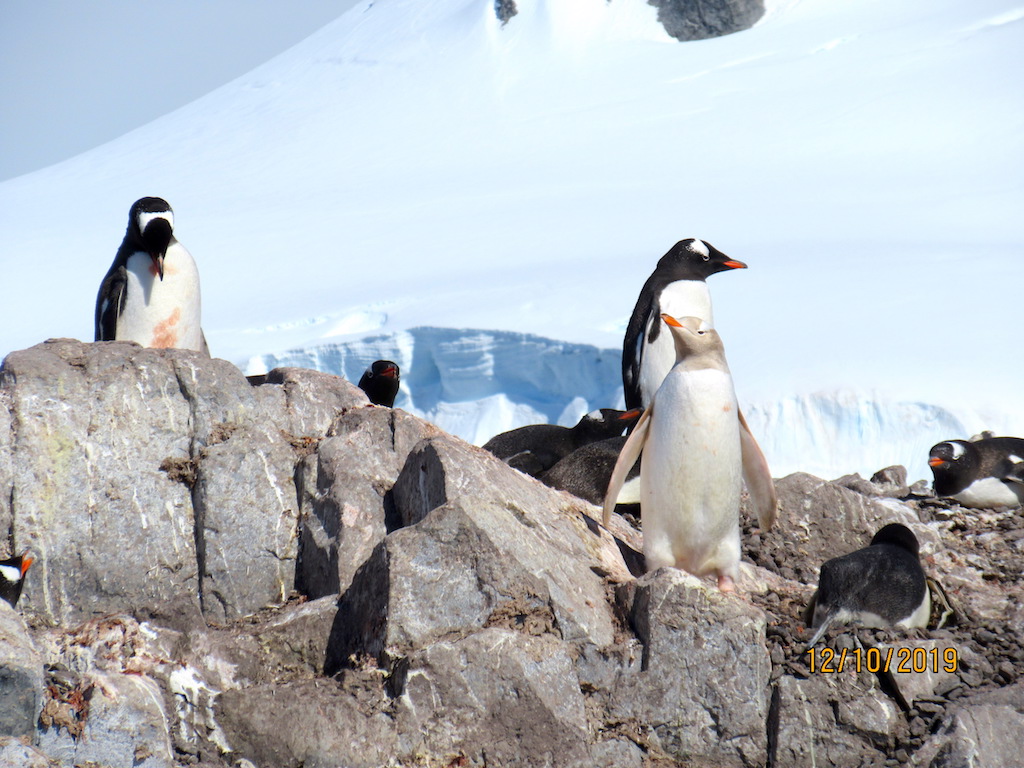 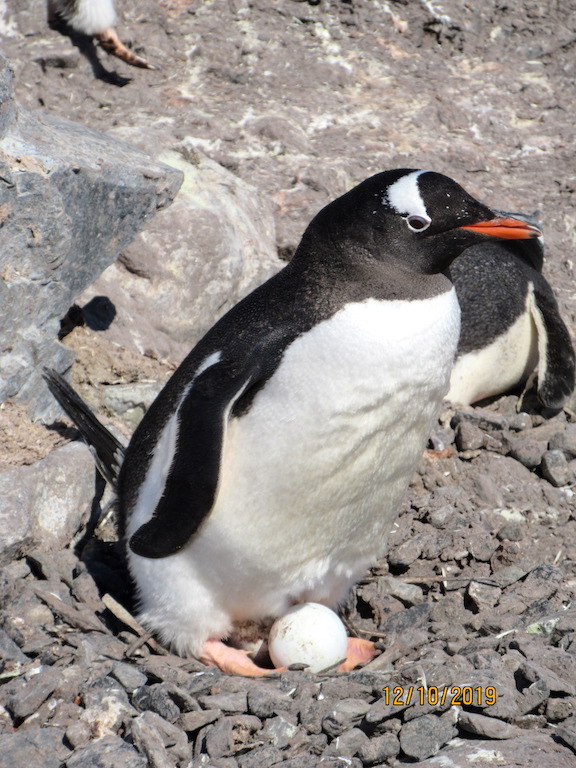 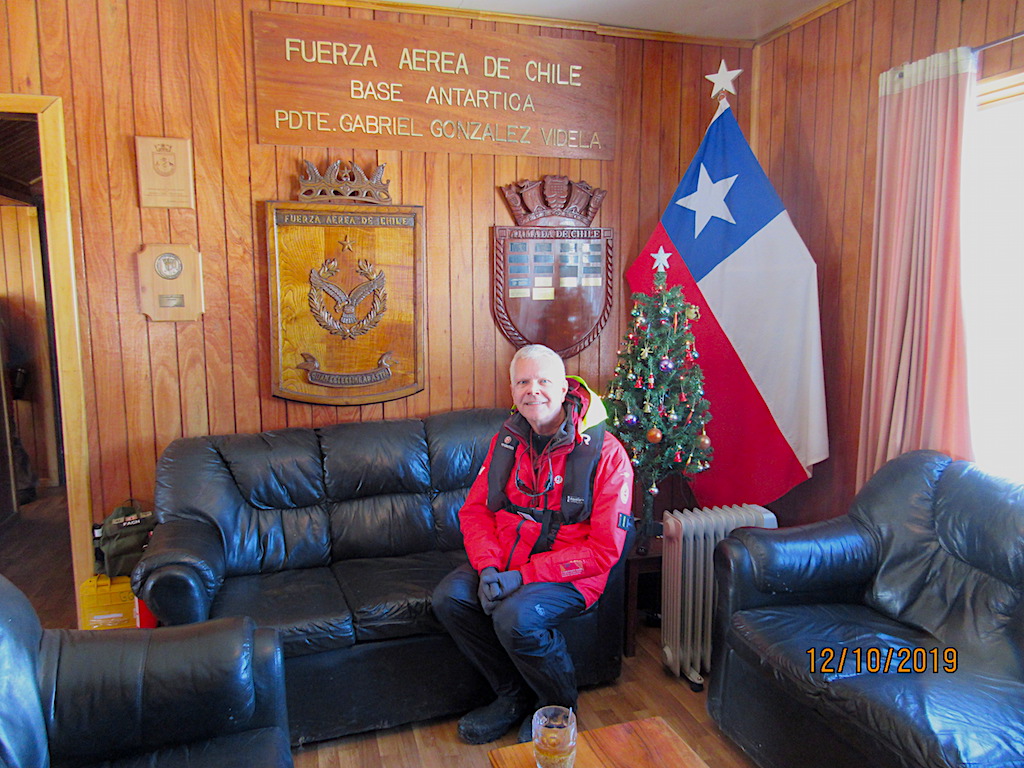 It was another beautiful sunny day with temperatures around 42 degrees Fahrenheit. The crew tells us that it is extremely rare to have so many lovely sunny days with little wind in a row as we have had. Whales and other wildlife have been present also.

Our landing on this day was at the Gonzalez Vadela Station operated by the Chilean military during the summer months. The station was named after a Chilean president who was the first head of state to visit Antarctica. The station is located on a small peninsula that juts out into the water and is covered with Gentoo penguins and all the poop that goes with them. Our walkway was surrounded by penguins nesting on their very well-developed nests of small rocks. There must be a much greater abundance of rocks at this location because many of the nests were very large. When the penguins stand up, many of them were hiding one or two eggs that they would adjust with their beaks before covering the eggs again. There was even one penguin that lacked much color and was nearly beige in color.

Today for lunch we ate with three Australians we met on board. Marcus and Jim, from Sydney, were a couple who have been together for 23 years. They were traveling with their straight friend, Bryan, from New Castle. We had some laughs as we became better acquainted over lunch.

The station has about fifteen service members manning it from Chile. They welcomed visitors from researchers to cruise ship passengers. There is a small museum on the property with many black and white photos of historic events in the area. They were also selling some souvenir t-shirts, patches, pins and stickers for your passport. We were welcomed into the residence where the service members live to see the kitchen, living room and dining room. The residence was comfortable looking and they even had a lighted Christmas tree in the living room.

Back onboard the ship we sailed further south where there was much floating ice and icebergs to contend with. The captain had hoped to take us through a narrow channel with high mountains on the sides for its scenic beauty, but by 8:00pm when we reached the channel, there was too much ice to continue. Instead, we stopped our travel south and just parked in the sea to admire the beauty of the area as the sunlight changed the shadows of the ice-covered mountains.