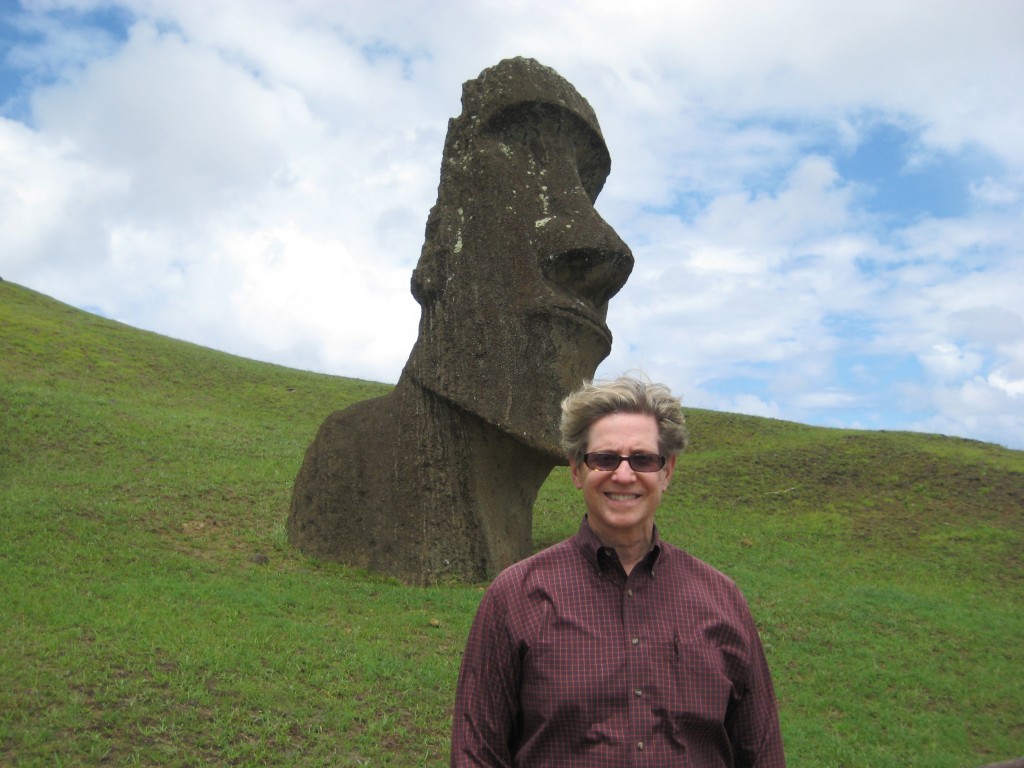 The weather today is mostly sunny and very warm. It looks like the perfect day to visit this unique and very isolated island. Sometimes things can be very deceiving, and todays adventure was one of those days.

Because there is no pier large enough for our ship to dock, our visit to Easter Island requires us to take a tender from the ship to shore. The tenders are small life- boats that are lowered from the ship into the water and used to transport passengers from the anchored ship to a small dock on the island. Each tender holds something like 75 passengers and they run all day long while we are in port. Unfortunately the weather is often very rough here and only about 30% of ships actually disembark passengers. We were lucky to have made it onto the island although it was much later than anticipated. Around 8:00 in the morning we went to the theater to get our tender tickets to go ashore as soon as possible.  We had intended to go ashore by 9:30 with some friends to take a private tour with a local guide our friends had met last year. Due to the weather the tender boats were getting beaten against the ships loading platform causing damage to them. Additionally it was taking a very long time to get the tender boats loaded with passengers as they bounced up and down in the rough seas. We were finally allowed to take a tender a little after noon due to the delays with the tenders. The tender we took to shore has been smashed against the ship splitting the fiberglass body and breaking out a window, which was now covered in plastic. When the large waves crashed over the bow of the tender buckets full of water poured into the boat. The short distance to the protected dock ashore was very close but took us awhile to get there as we rode each swell in the sea up and down. Shortly after we made it ashore by tender the captain stopped all tenders due to the high seas and unsafe conditions. Many passengers were unable to go ashore and were very disappointed.

The tour guide our friends arranged for our 9:30 tour was waiting for us at 1:00 PM.  So we convinced our German friends, Allan and Matthias to join us for the island tour which now as four hours rather than seven.  The tour van was dirty and had loose seats, but, at this point we didn’t care.

Easter Island is a part of Chile and keeps the same time as Chile so we have not yet changed our watches from Fort Lauderdale time. Easter Island is located 2,237 miles west of Chile and 1,290 miles east of Pitcairn Island, making it one of the most isolated, inhabited places in the world. The island is almost triangular in shape and is approximately 17 miles in length and 8 miles in width at its widest point. It was given the name Easter Island because the Dutch discovered it, on Easter Sunday in 1722. Literature suggests that Easter Island was settled around 300-400AD about the time that Hawaii was settled; however some scientists say the island was not inhabited until 700-800AD. More recent studies, including radiocarbon dates from what is thought to be very early material, indicates that the island was settled as recently as 1200AD, the time of the island’s deforestation.

The island is nothing like the tropical paradise you would expect to find on an island in the South Pacific. The island is mostly barren with grassy hills and clusters of small trees, which have only existed on the island over the last thirty years or so. Before that it was completely barren without trees or grass. The roads are mostly dirt and gravel and many have been eroded from recent rains.

Easter Island is most famous for its large stone statues called Moai, which were carved from 1100 to 1680. There are a total of 887 statues, which have been inventoried on the island as well as in museums around the world. The statues are all of men, mostly torsos, some kneeling on bent knees with their hands over their stomachs. Many of the Moai are buried up to their necks by years of shifting soils. Some have been restored, although most remain in their original state–often broken, unfinished and many deteriorated by nature. Today the Moai are all natural stone in color but when they were first completed they would have been smoothly finished and beautifully painted in bright colors.  As many as 1,000 family members would carve on a statue at any given time.

We visited the quarry where most of the Moai were carved from stone and later transported around the island. They believe that Moai were made in the likeness of actual people by their families to honor them, especially if they had what they believed was high energy. They believed that the energy was highest in those who were first born and that if you were born of parents who were also first-born that you possessed even greater amounts of energy. If you were the first-born they believed that you should never cut your hair. This may account for the hat like pieces on the top of some of the Moai’s heads. They believe that this may represent the hair that would have been tied up on top of their heads.

By the time we finished our tour and returned to the tender dock it began to rain like crazy. The ride back to the ship was a wild one but we all made it back safely and the ship was on its way towards Pitcairn Island.

At dinner the champagne was flowing to help smooth the anger of the passengers who were not able to go ashore at Easter Island. The entertainment on this night was a British gentleman by the name of David Howes. David can play just about any musical instrument and even some items that are not musical instruments. He played the piano, euphonium, a baby euphonium, a trumpet, a post horn not to mention he played a garden hose, showerhead and hose and even an old persons walker. He had incredible energy and was very entertaining and funny.