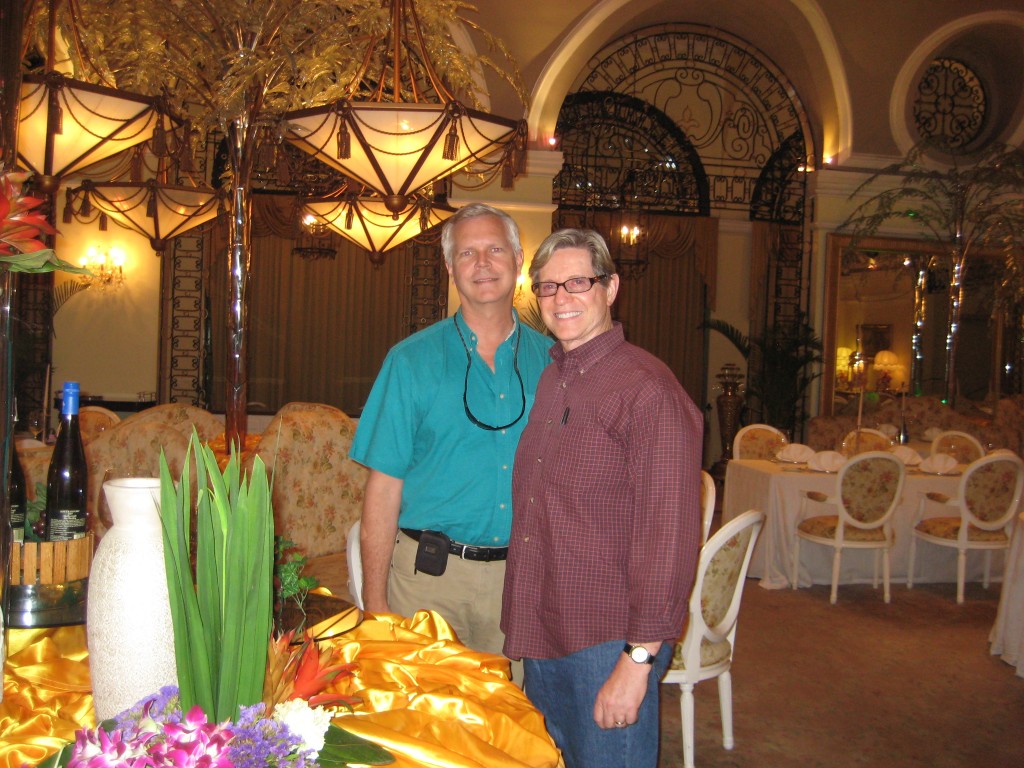 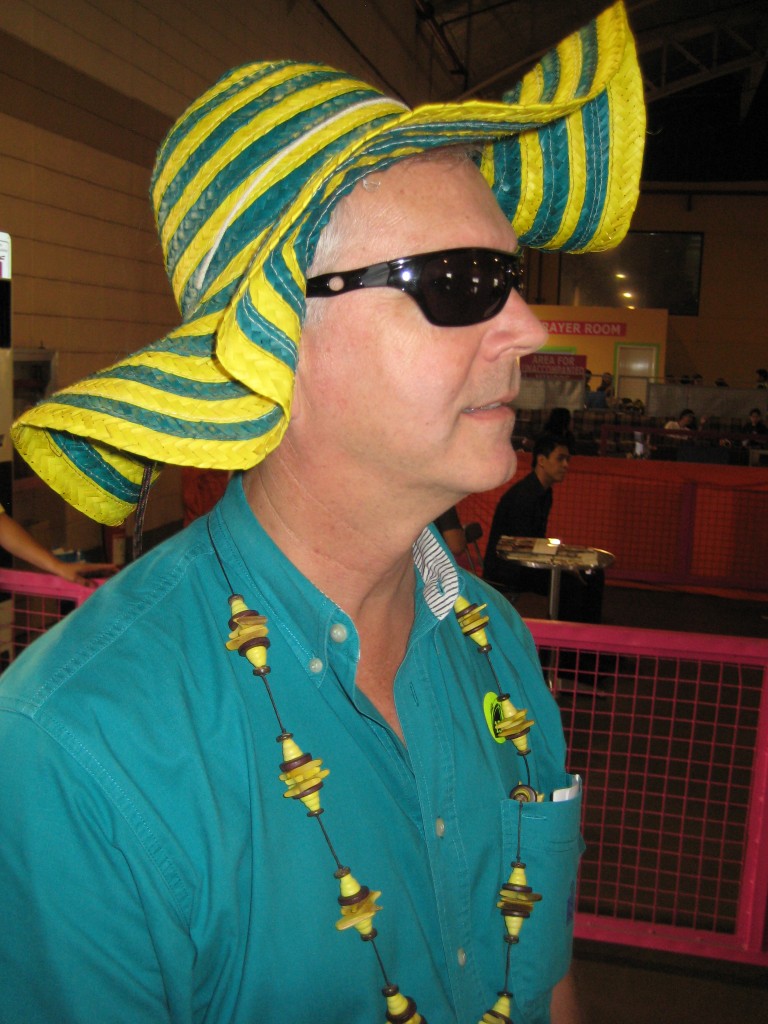 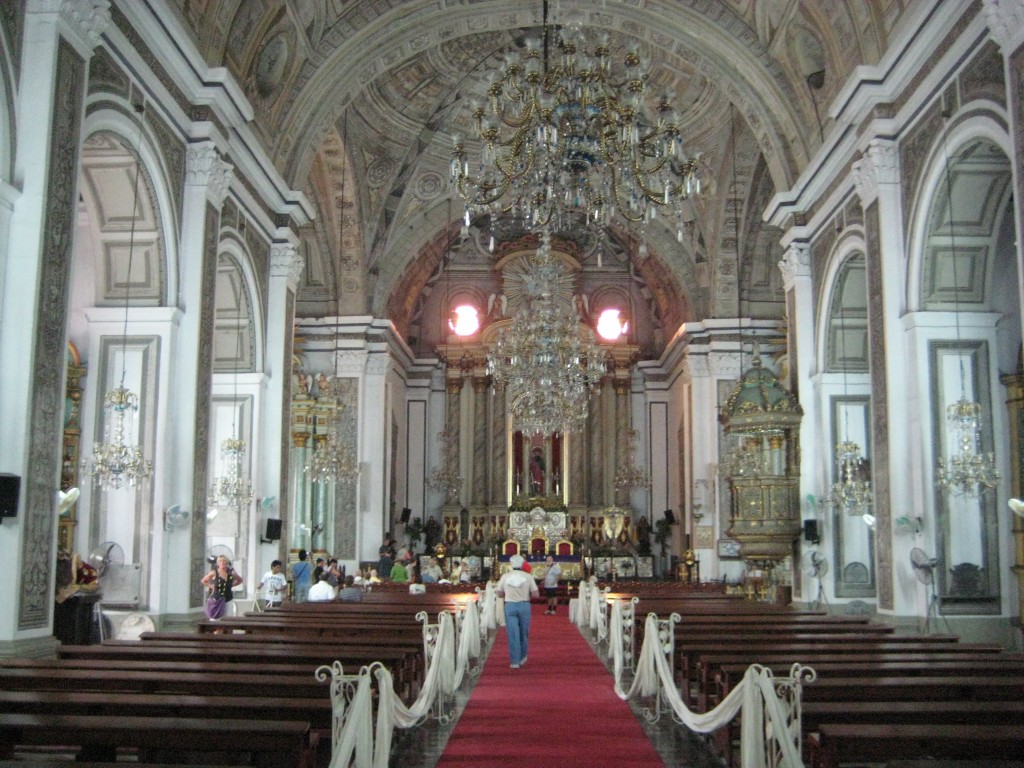 Similar to our greeting in Puerto Princesa, school children were waiting for us at the pier and danced and played music for our arrival in port. Colorful woven straw hats and strands of beads were given to guests as they disembarked the ship. The weather was hot and humid.

With over 19 million inhabitants, Manila is an incredibly large city with skyscrapers, traffic and people everywhere. Manila is the capital of the Philippines. Spain controlled the Philippine Islands for over three centuries from 1565 to 1898 when the U.S. occupied and controlled the city and the Philippine archipelago until 1946. The Japanese occupied the Philippines at the outbreak of World War II for the most of three years. During World War II, much of the city was destroyed and it was not until 1975 that the Metropolitan Manila region was enacted as an independent entity. The name Manila is from the phrase may nilad, Tagalog for “there is nilad”, in reference to the flowering mangrove plant that grew on the marshy shores of the bay, used to produce soap for regional trade. There are currently 1.7 million births a year in Manila so you can see how the city has grown so quickly.

Our tour here was called “The Charms of Old Manila” which took us to the old areas of the city nearby the port. Our first stop was a visit to Rizal Park with a monument to commemorate Dr. Jose Rizal, a national hero. Ultraconservative zealots attempted to eradicate local religious ceremonies during the Spanish reign. Filipinos retaliated, but no revolt was more violent than the uprising sparked by Dr. Rizal’s sham trial and execution in 1896. Devoted to peace, the scholar openly opposed Madrid and encouraged Filipinos to fight for their independence.  He was considered a traitor by Spain and was executed.

Across from the park is a huge outdoor amphitheater where Manila made it into the Guinness Book of World Records for the largest gathering to see Pope John Paul II. A crowd of five million gathered here to try and get a glimpse of the pope, which shows you what a Catholic country this is.

Next we visited the “Intramuros” or old walled city, which was a Chinese settlement before the Spaniards fortified it. Political prisoners, including Dr. Rizal, were locked away here for safekeeping. Today the walled city is a beautiful lushly landscaped park with a variety of historical buildings including Fort Santiago, which served as headquarters for the Spanish, American and Japanese colonizers until its destruction in 1945. Parts have been restored while other parts remain in ruins.

The Manila Cathedral was next on the tour. Unfortunately it is currently closed for repairs, so we were only able to visit the exterior and take photos from the lovely park in front. In this area there are many horse drawn carriages, which take visitors around the city for about $9.00 per thirty minutes. The horses they use are quite small in stature in comparison to our horses.

Casa Manila was our next stop. Here we were able to visit a reconstructed 19th century Spanish Colonial style mansion. The home would have been owned by a wealthy family and  the man would have had his offices here, as well as rooms for entertaining. As least twenty servants would have been employed to tend to the family. High ceilings, hardwood floors, hand painted walls, and luxury furnishings abound. It even had an indoor bathroom with two different sized tubs and a two-seater toilet. The house was quite beautiful even by today’s standards.

San Augustin Church, the oldest structure in the Philippines dating back to 1571 was our next stop. Here we not only saw the church, but also an attached museum of elaborate religious statues. Many of these figures were made of metals and ornate dresses, some standing life size.

During all these religious visitations, Jenn, our friend, had to confess that she had been dreaming of having sex with Jesus….only Jesus was Black.  She called him SBJ, or Sexy Black Jesus.  Way to go, Jenn.

On our way back to the ship we were driven through parts of Manila where we saw a little bit of everything. Beautiful skyscrapers next to shantytowns, overcrowded streets where few cars seemed to follow any type of rules of the road and jeeps leftover from World War II have been converted into Jeep-Knees, which are buses that hold about 20 passengers. Each of the buses has been elaborately decorated with decals, applied figurines or anything you can imagine.  They are called Jeep-Knees because the passengers’ knees touch in the vehicle.

After a bite to eat onboard the ship we walked a short distance to the Manila Hotel, which is a 100-year old historic hotel. Here we asked to be shown the archive room where you can view a photographic history of the hotel including General MacArthur’s suite, famous U.S. presidents and many famous people from around the world who have visited. The hotel also has a beautiful pool area and a high-end restaurant called the Champagne Room, which is very elegant.

Next we took the ship;s shuttle to the local area mall called Robinson Mall where we found an enormous American-style shopping mall. We found many familiar chain restaurants like TGIFridays, Starbucks, McDonalds, Burger King, as well as most of the same brand names that we find at home. Some people thought that the mall had more stores than the Mall of America.

The evening’s entertainment was by Hilary O’Neil who had performed a week or so ago.