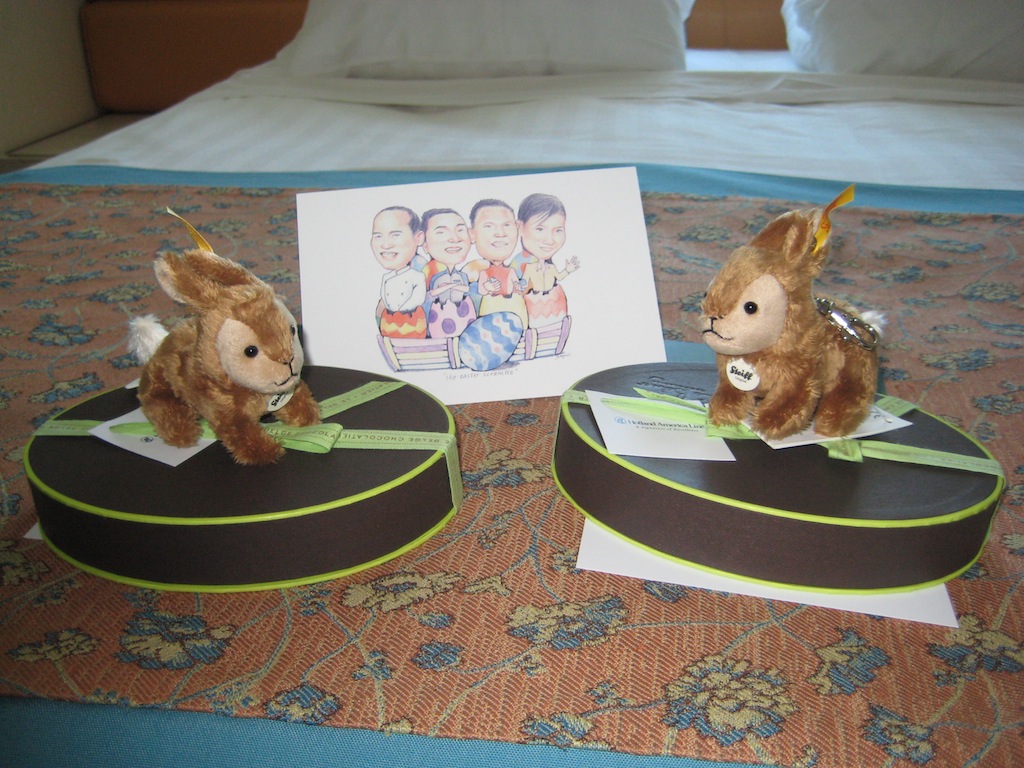 The Christian festival of Easter probably embodies a number of converging traditions; most scholars emphasize the original relation of Easter to the Jewish festival of Passover, or Pesach, from which is derived Pasch, another name for Easter. The origin of its name is unknown. Many scholars believe it came from Eastre, the Anglo-Saxon name of a Teutonic goddess of spring and fertility. Her festival was celebrated on the day of the vernal equinox; traditions associated with the festival continue today with the Easter rabbit, a symbol of fertility, and in coloring of eggs with bright colors to represent the sunlight of spring, and used in egg-rolling contests or given as gifts.

The ship had several Easter Sunday services including a sunrise service on the deck at 6:30am. We did not attend! There was an Easter egg scavenger hunt and an Easter bonnet parade and egg decorating class for the kids. When the cabin stewards made up our room this morning they left us two egg shaped boxes of chocolates and small stuffed bunnies as a gift from the crew.

Barbara, our travel guide, lectured on things to see and do in Durban, South Africa. We attended an open rehearsal of the night’s show by the Amsterdam singers called Sessions. The premise was to experience what goes on inside a recording studio with raw live vocals and music from the 60’s and 70’s and some more recent. The only problem with that was that they used canned music in the background with the orchestra playing over it.

It was a quiet day but the time seems to pass quickly with our normal routines. Most sea days I go to the library and get the two Sudoku puzzles of the day and work on those as we sit and wait for a show or lecture to start. While I do that, Kent reads the daily NY Times bulletin with its eight pages of condensed stories. There are always at least two puzzles out at any given time in the library to work on as well. The puzzles they have out are often between two and four thousand pieces so it takes awhile to finish one puzzle. Three meals a day and sometimes – afternoon teas takes up a part of the day. When we are feeling motivated we walk for about 45 minutes on the deck.

The cast performance ended up to be a good show after the rough rehearsal earlier in the day.