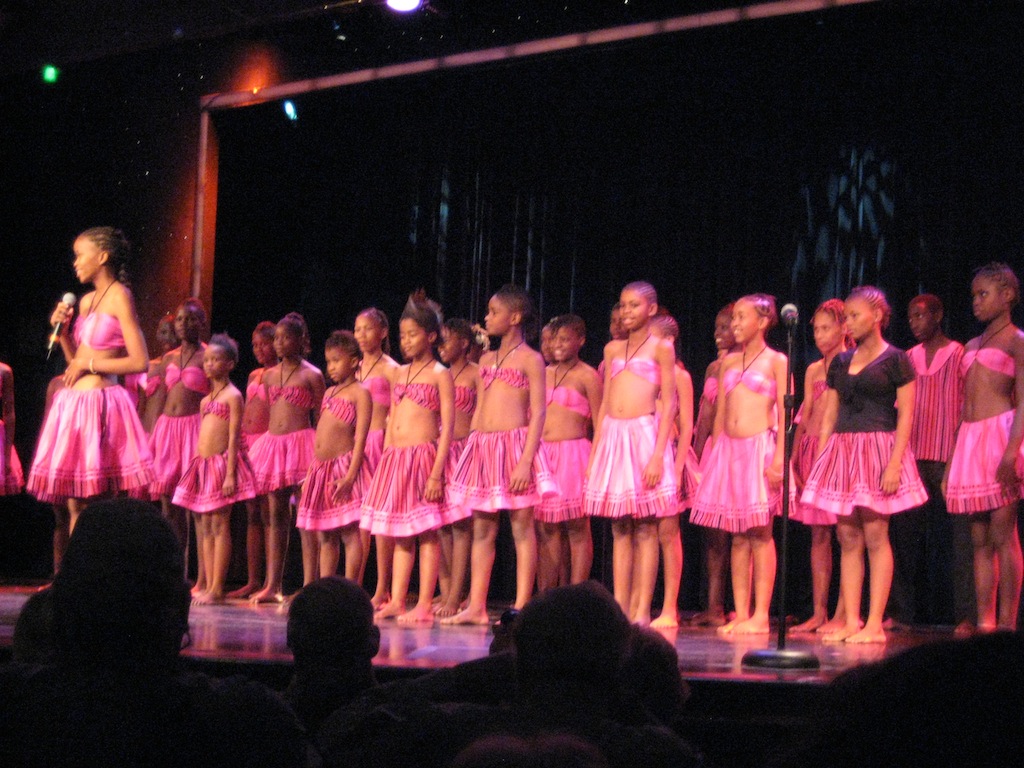 This second day in Walvis Bay, we took the ship’s shuttle into the town of Walvis Bay where we had a look around the town. The town is laid out on a grid pattern with numerical streets going north and south away from the harbor starting with First Street. Streets perpendicular to the harbor having numerical numbers from south to north, although they are called roads. I’m sure this has caused much confusion over the years. The town was fairly neat and tidy although there were a good number of vacant storefronts and many of the buildings were in need of a fresh coat of paint. We saw churches, markets, clothing stores and the usual shopping, yet nothing architecturally interesting or unique.

In the afternoon, back onboard the ship, we were treated to a concert by the Bernard Nordkamp Center children’s choir of 35 children. They were treated to a tour of the ship and a lunch of hamburgers, hot dogs, pizza and ice cream in the Lido restaurant before the concert. They gave a delightful performance of song and dance for about 45 minutes. After the concert they were presented with about $6,000 in cash to help with the work that the center does for the children here in Namibia.

Father Bernard Nordkamp came to Namibia in 1986 and throughout his fifteen years of dedicated service, he focused on the plight of children – especially those in Windhoek’s northern Katutura settlement. His goal was to provide a safe place for orphans and vulnerable children as well as a soup kitchen, thereby guaranteeing them at least one hot meal a day. Father Bernhard passed away in July of 2009, but the center continues to serve the children. Today they have a school with six Namibian teachers providing after school education for the children in addition to their public education. They also provide sporting and cultural activities like swimming, soccer, singing and dancing.

Naomi Edemariam, a concert pianist, provided the evening’s entertainment. She was an accomplished pianist who performed a wide variety of classic pieces.

One of the mid-ship cleaners on board has been very courteous, kind and dedicated to his work of vacuuming the stairs and cleaning the railings and glass mid-ship.  We have talked with him several times and decided to ask him to have lunch with us.  However, to do this, we had to write to his boss to get permission to have lunch with him.  The boss came to talk with us, only to say the Holland America policy was not to allow crew members to fraternize with the guests.  It is understandable, in that if we favor one crewmember, the others may feel left out and that might hurt morale.

The cleaning crew are like prisoners.  They work long hours, seven days a week for ten months at a time, go to the crew quarters in the lower decks of the ship to eat, sleep, exercise, etc., and stay there.  They are not to visit passenger’s areas when off duty and they should not interact with passengers except to greet them while working.  However, they do have opportunities they wouldn’t have back in their home countries.