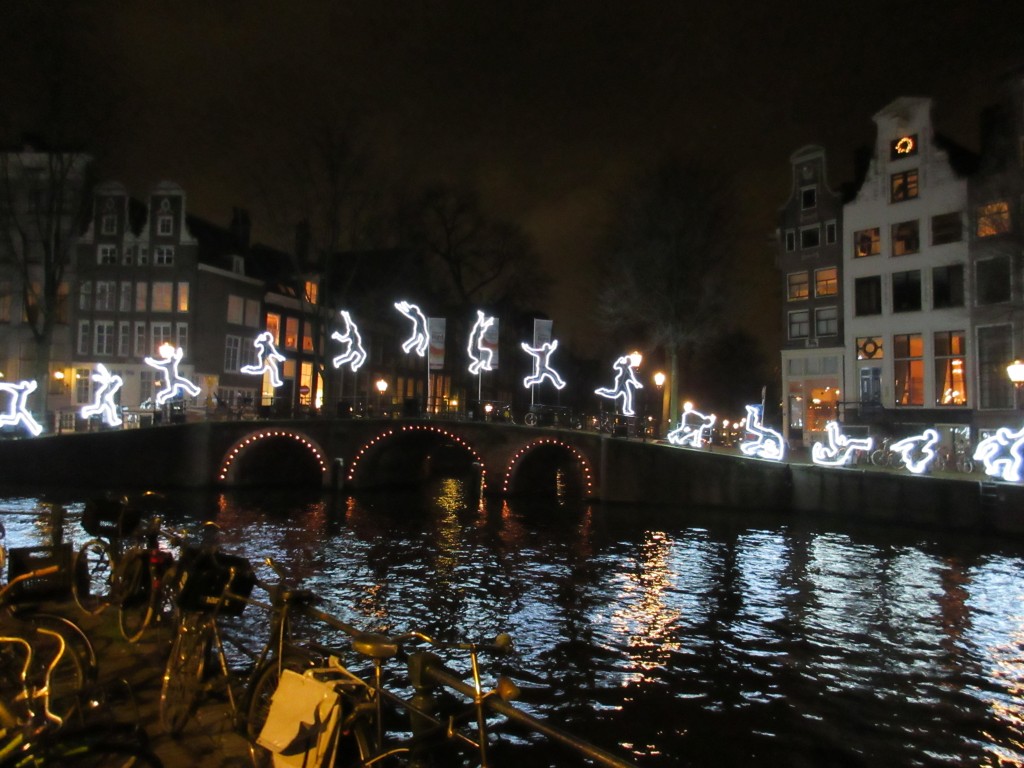 Happy New Year to one and all!

We found our way to the train station just outside the airport terminal and caught a train to Amsterdam a short 20-minute ride away. We are staying at the Crowne Plaza Hotel in the city center, a short walk from the train station. Our room appears to have been carved out of the attic with large exposed beams. The finishes are beautiful and, best of all; they had a room for us before 9:00am. (Normal check in time was 3:00am.

The weather is extremely cold by California standards. People are bundled up in coats, hats and gloves. The streets are filled with broken champagne bottles, trash, and the remains of firecrackers from the New Year’s Eve festivities. Most of the major shops were closed today but some smaller shops and restaurants were open. We had lunch at a small Chinese/Indonesian restaurant not far from our hotel. We spent the afternoon walking the streets window-shopping and people watching. The streets are busy with loads of people out walking and shopping. We are able to recognize many different world accents from the passersby.

The daylight hours are short with it only getting light about 9:00am and by 5:00pm it is dark again. The streets are elaborately decorated with holiday lights and we even saw a canal with chandeliers of lights hanging over it. They have a Festival of Lights and Water during this time that we hope to have a chance to explore while we are here.

The old city center of Amsterdam is formed by a series of canals in a semi-circle. Along these narrow canals is a large number of mostly 17th century residences built very narrow (less than 30 feet wide) and tall due to the lack of space. Since the interior staircases are very narrow a pulley system allows large items to be hoisted up from below and into large windows on each floor.

The city of Amsterdam has about 820,000 inhabitants, 600,000 bicycles and comprises about 175 nationalities. Prostitution has been legal since 1830 and is strictly regulated and taxed. Marijuana and Hashish are also legal and available in what are referred to as coffee shops. Of course, Kent will be doing some smokin’! not!