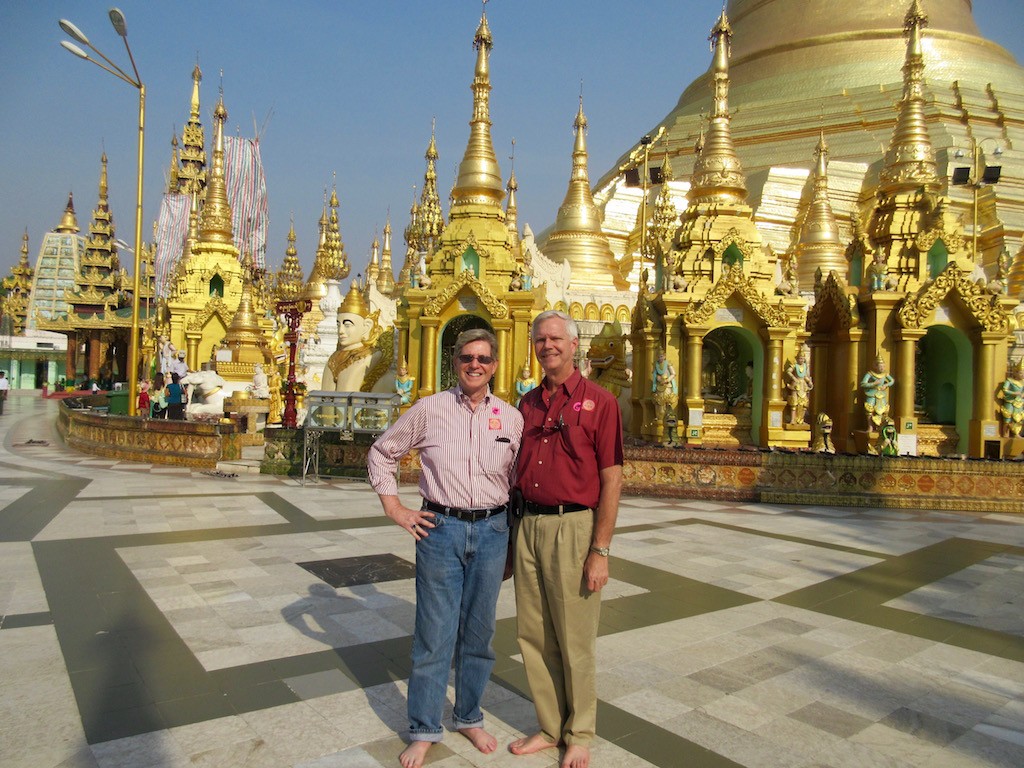 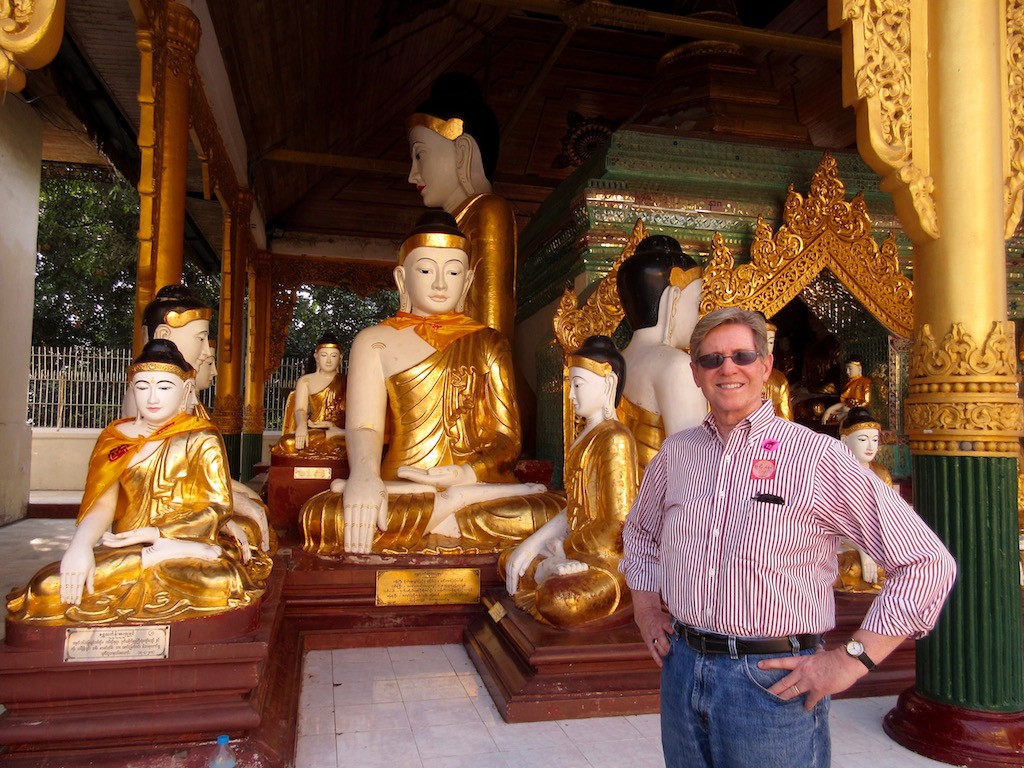 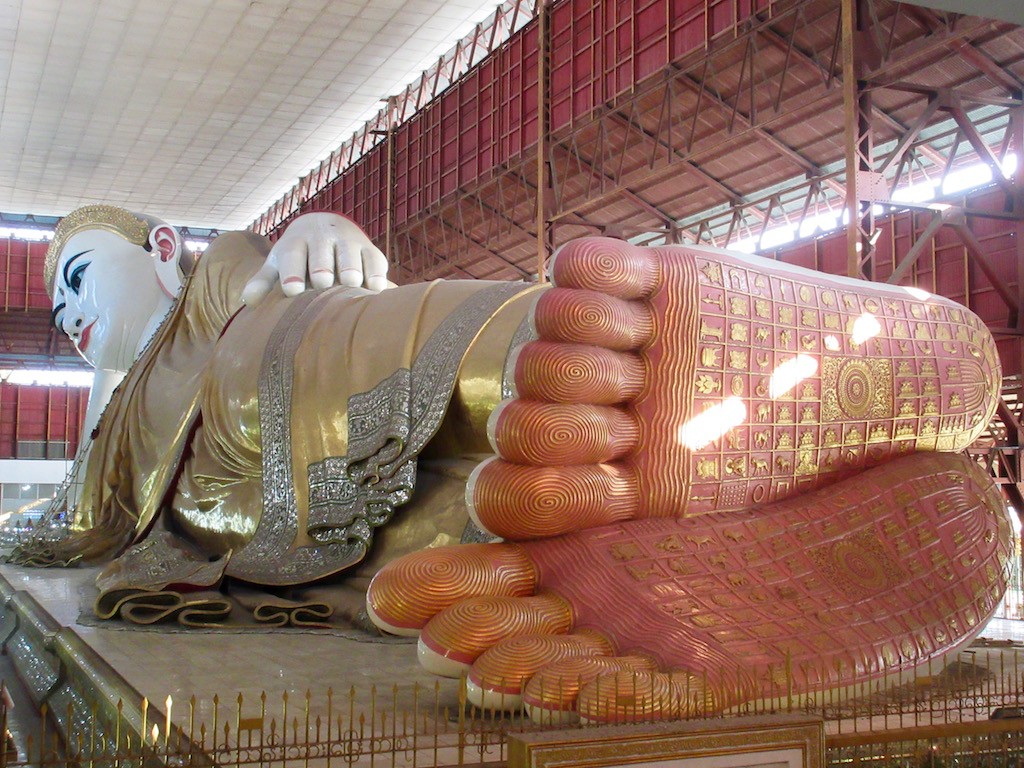 Thilawa is the port town where the ship was docked but is about 30 miles from the town of Rangoon. Depending on traffic conditions, similar to those in India, the ride can take you from 90-minutes to more than 2.5 hours. Our ship excursions move along the streets in a caravan, and are provided the resources of a police escort, to stop cross traffic along the way, and help to clear the roads.

Myanmar is located on the Bay of Bengal and the Andaman Sea. It borders India and Bangladesh on the north and west, China, Laos and Thailand on the east. King Anawrahta formed the country in the 11th-century, with Bagan as its capital. The empire collapsed with the invasion of the Mongols 200 years later. King Alaungpaya, on the location of the small town named Dagon, founded Yangon (later Anglicized to Rangoon) in 1755. The country was ruled by the British from 1852 until 1942 when the Japanese occupied the area until 1945. Allies retook the city in 1945 but this would be short lived. On January 4, 1948 the country regained independence from the British Commonwealth. General Ne Win, a military ruler and then a self appointed president, was an isolationist ruler of the country from 1962 until 1988. During this time the country was isolated from the outside world. In 1988 he resigned due to extreme civil unrest. During his rule the infrastructure deteriorated through poor management (corruption) and population growth. In 2011 president Thein Sein came into office and began political and economic reforms that lead to the opening of this long isolated country.

Myanmar is slightly smaller in size than Texas. Rangoon is the largest city with a population estimated at 5.5 million, 86% of which are Buddhist. Under British rule the city was laid out in a grid pattern and by 1900 beautiful colonial buildings and parks filled the city. It was said that the city was on par with London and was known as the garden city of the east. Unfortunately, in 2008 much of the city was heavily damaged by cyclone Nargis, which caused $800 million in damage. Today these old colonial buildings are being restored and many of the great parks and lakes remain.

Throughout its history Myanmar has experienced waves of immigrants which traveled southward along the Ayeyarwady, Chindwin, Salween and Mekong rivers. These diverse ethnic groups came primarily from the Central Asian Plateau (modern day Tibet and China) and are reflected in the wide-ranging ethnic assortment found in Rangoon today. 86% of the local people are Buddhist, 5% Christian, 4% Muslim and there are 56 Jews today.

The local currency is the Myanmar kyat (MMK) pronounced like CHAT and the current exchange rate is approximately 1,265 kyat to the US dollar.

Our tour today was titled “The Best of Rangoon”. The drive into town was an adventure itself. Drivers rarely follow any rules of the road so motorcycles, trucks, cars, rickshaws, and people compete for a space on the roads. The men are mostly dressed in western style shirts with a skirt from the waist down to the floor called a Longyi. Many of the women wear a similar style skirt, although more colorful and possibly adorned with needlepoint. Some of the women also wear loose fitting pants with a loose fitting top. Everywhere you go someone is selling something along the roadside. You see watermelon stands, fruit stands, coffee shops, open air restaurants, pottery, clothing, food items, and so much more.

The first stop (photo stop) was at the Town Hall, built in 1905, across from the Sule Pagoda, at the center of town and a break to stretch your legs. At this stop is also the Queen Victoria garden with a large obelisk honoring the country’s independence. The city center is filled with many buildings remaining from the colonial period, although most of the buildings are in very poor condition and in need of repair and paint. Construction appears to be going on everywhere so they do seem to be improving parts of town. From here we proceeded to the 70-year-old Bogyoke Aung San Market, known as Scott’s Market, to stroll the more than 2,000 stalls. The market stalls are filled with masses of merchandise like jewelry, loose semi-precious stones, fabric, clothing, puppets, lacquer ware, woodcarvings, souvenirs and food stalls around the perimeter. Kent bargained for the perfect souvenir.

By now it was lunchtime and we were taken to a very beautiful hotel called the Shangri-la for a delicious international lunch. The buffet was enormous and included all sorts of local and international dishes from salads, meats, vegetables and desserts. There was something for everyone.

After lunch we went to the National Museum to gain a better insight into the history of Myanmar. The museum is six stories tall and includes items like the 26-foot tall Lion Throne of the last Burmese King. We had little time to explore the museum but our guide took us to see some of the most important items. I would have liked to have more time to explore the museum.

Our next stop was at the Shwedagon Pagoda or Golden Pagoda. Considered one of the wonders of the religious world, this spectacle is believed to be the earliest pagoda of the Gautama Buddha Era, built by King Okkalapa more than 2,500 years ago. Located on the top of Singuttara Hill, and visible from all over town, the gleaming golden stupa soars 326 feet tall. It is topped with more than 6,500 diamonds, rubies and other precious stones. In the tradition of the Buddhist faith, we walked clockwise around the stupa to admire not only the beauty of the golden stupa but the many shrines around it. At the base of the stupa there are hundreds of smaller shrines, some for each day of the week, where you can pray, light a candle, place some flowers, or pour water over the shrines. Some of the shrines are small, while others are large enough to walk into and nearly all of them have Buddha statues standing, sitting or reclining. It is really an incredible site with so much to see, although we did not have enough time to see everything. Maybe we’ll have more time next time.

Our next stop was at the Chauk Htat Gyi Reclining Buddha. This colossal 223-foot- long reclining Buddha statue originally built in 1901 is one of the largest in Myanmar. After being exposed to the elements for years, in 1925 the Buddha was re-built and a roof was built to protect it from the sun and the rain.

No shoes or socks are allowed inside Buddhist temples so we had to check them at the door before entering any of the Buddhist sites.

The entire tour was about nine hours in length. By the time we returned to the ship, we were ready for a shower and a bite to eat. The only entertainment was a movie in the main showroom titled “Victor Frankenstein”. We gave it a miss since we had a busy day planned tomorrow.