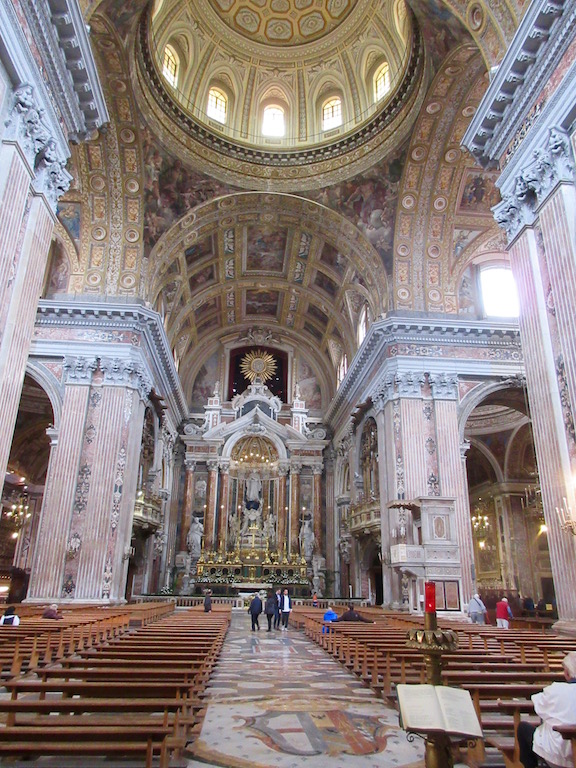 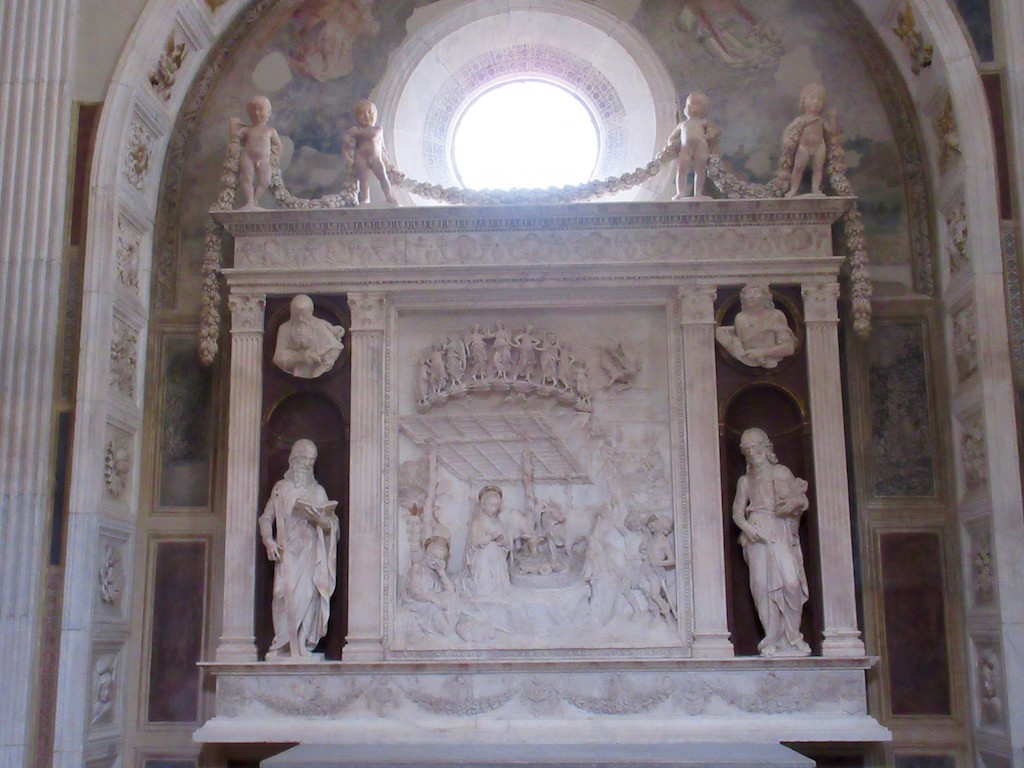 With one million people, Naples is the third largest Italian city after Rome and Milan. It is located on the west coast of southern Italy. Its historic city center is the largest in Europe, covering 4,200 acres and is a UNESCO World Heritage Center. The city has many important museums and is home to some 448 historic churches. The city of Pompeii, destroyed in 79 AD by the eruption of Mt. Vesuvius, is located a short drive to the south.

We had planned to take a tour of the Amalfi Coast and Sorrento, but due to the public holiday of Easter, busses were not allowed to drive on the coastal road. We instead headed out on foot with our friends Michael and Joey from Canada to explore the city on foot. Our first stop was a church with a plain looking exterior as we searched for a church, which housed a spectacular marble statue we had heard about. This church was not the one we were looking for but turned out to be quite spectacular inside. Not only was the main cathedral filled with beautiful statuary, marble and paintings, but there were multiple side chapels and rooms that were equally as beautiful. One chapel in particular had a gorgeous hand painted ceiling, wood paneling with marquetry inlaid wood panels, and hand carved and painted wood statuary. It was artistry at its best and to think that this chapel was hundreds of years old and these items had withheld the test of time beautifully. We did finally find the church we were looking for, but due to the Easter holiday, which is celebrated on the Monday following Easter, there was an enormous line to get into the church to see it and we decided not to wait.

We then found a street called Spaccanaoli Street or Via Dei Tribunali Street where the locals eat, shop and live. Our friends Steve and John, who had been on the ship earlier in the cruise, had recommended this street as one of their favorites in Naples. Due to the holiday, many of the shops were closed but the street was filled with local families of all sizes out celebrating Easter by being together, eating and exploring the city. Above the shops where people live, you find the laundry blowing in the breeze drying. Even though the narrow streets are filled with pedestrians, cars and motorcycles are slowing make there way through the streets as well.

We stopped at a local family owned pizzeria with photos of Bill Clinton having eaten there when he was president. Naples is known as the home of the pizza so we thought that we should check out the local pizza. We each had a fairly large pizza but none of us thought the pizza was very special. The crust is fairly thin and was cooked in a wood-burning oven, but the taste was rather bland and unexciting.

Our next stop along the way was to visit the National Museum where artifacts from Pompeii and Herculaneum are housed. Unfortunately by the time we reached the museum it too had a very long line and was extremely busy. We decided to give it a pass given our limited time in port.

We visited a couple of other churches along the way. One church that was enormous in size had gold and sterling silver statues, a lower level crypt, several side chapels and ostentatious ornamentation everywhere. There were paintings, statuary, candles, multiple altars and chandeliers everywhere. This particular church could easily hold thousands of parishioners. I cannot not imagine that any church in the US could compete with this church, but here in Europe it is much more common to see. The other church that we visited was quite the opposite in that it had a very plain interior, but was still beautiful. The city as a whole is like many other European cities in that it is filled with gorgeous architecture. Some of the buildings are in pristine condition but many of them are in need of restoration and many have graffiti on them. The streets are narrow and mostly lack any trees or greenery so it often seems like a concrete jungle. There are many plazas and public spaces around the city that have some greenery but many of those are only concrete as well.

We then stopped for gelato on our way back to the ship. There are some things that one must do while in Italy and gelato is one of those things not to be missed.

Back onboard the ship we were entertained by a British couple that called themselves Epic Moves. They were incredible dancers who had put together a show with clips from famous movies that included dancing. After showing a short clip of the movie they would perform a dance using the same style of dance as was in the movie. They also did a bit of the quick-change costumes. She changed outfits eight times in a very short amount of time. Each change only taking a few seconds behind a screen.