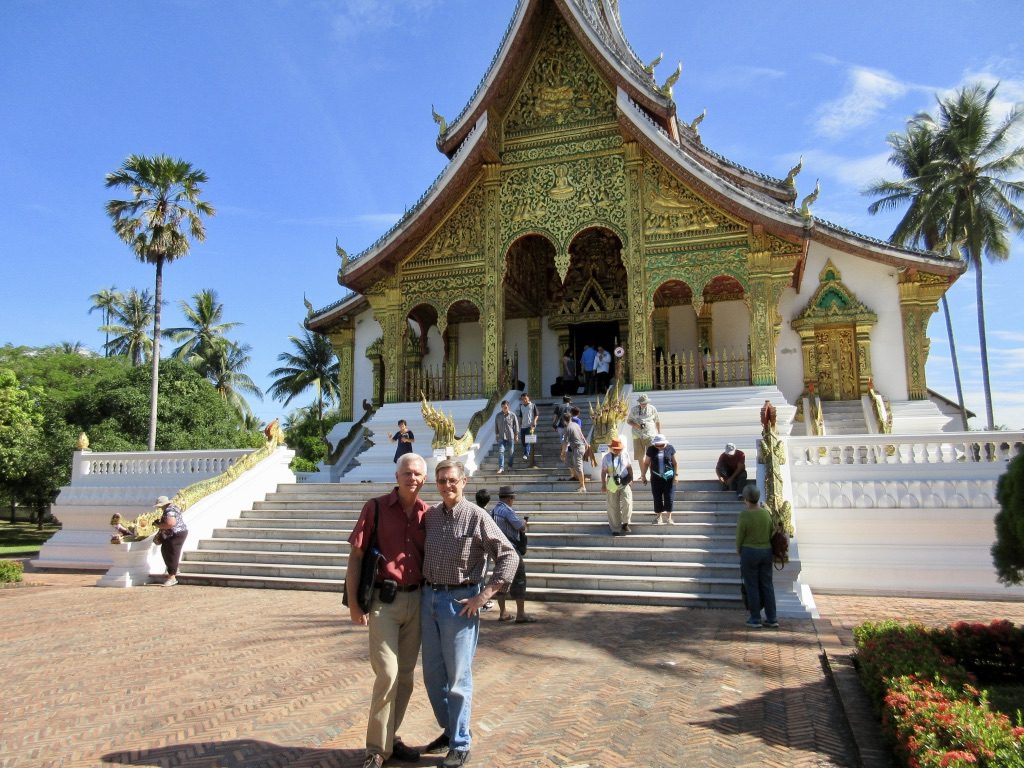 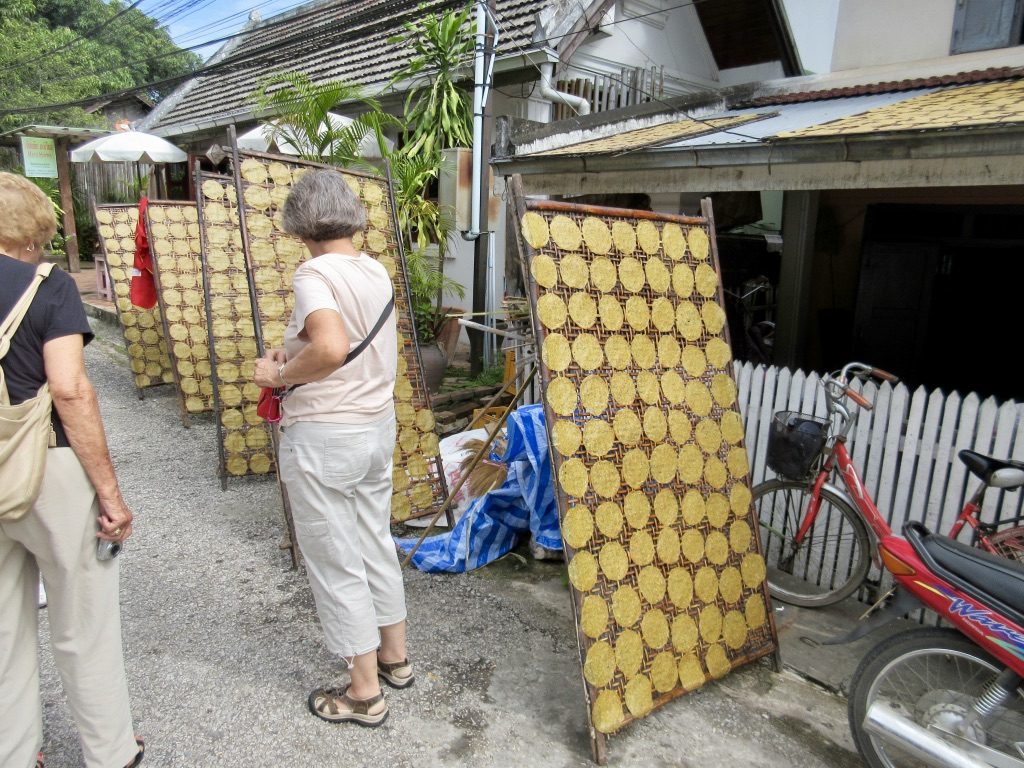 Luang Prabang – Food being dried on the streets 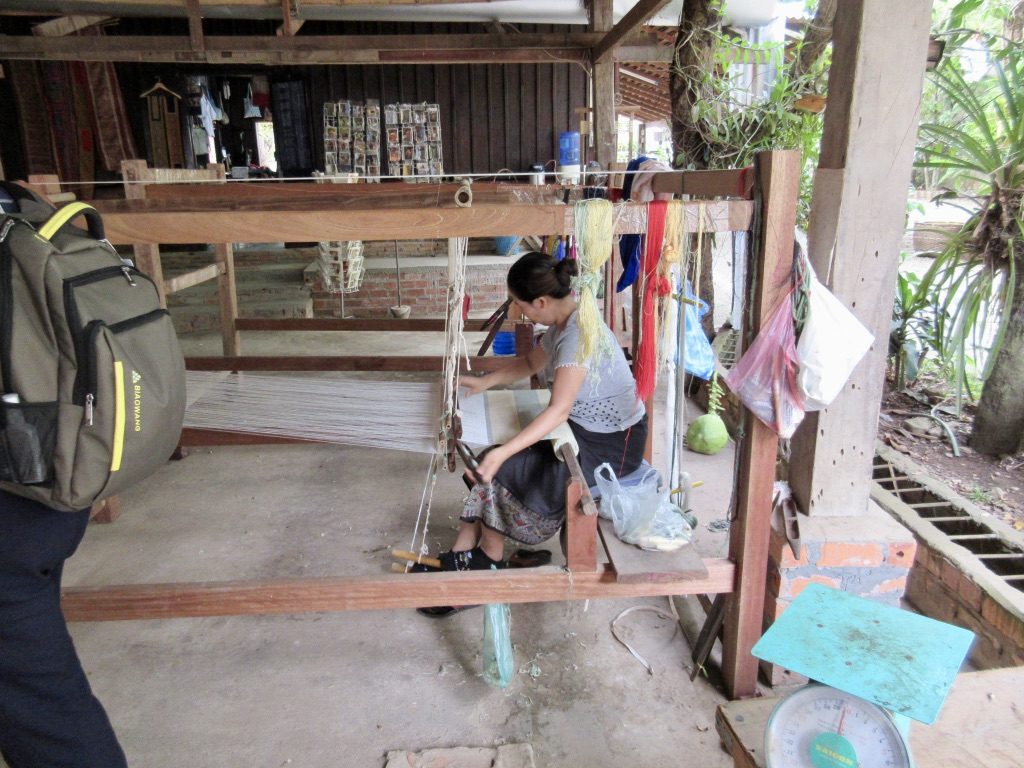 Our first stop on this morning was at the former Royal Family Palace Museum and Residence called Haw Kham. Built for King Sisavang Vong and his family in 1904 during the French Colonial era, it was later occupied by Crown Prince Savang Vatthana and his family. In 1975, the monarchy was overthrown by the communists and the Royal Family was taken to what they called re-education camps and the palace was converted to a national museum. The palace was built within a large walled compound with lovely lily ponds, lush trees, meandering paths and green grass lawns.

We visited a temple located just inside the main gates of the property that houses the museums most prized art, a small Buddha called Phra Bang. The statue dating back to the first century was cast in Sri Lanka of gold, silver and bronze alloy and is about 33” tall and weighs about 110 pounds. Some question the authenticity of this Buddha being the original, but it is highly guarded and no photos are allowed. They require you to remove your shoes to climb about 20 steps to the entrance of the temple, but no one is allowed inside the door. You can only look through the open door.

The main residence is also highly guarded and they require you to leave all bags, large purses and cameras in lockers before being allowed into the building. The royal residence is very nicely preserved and is filled with much of the original furnishings, family jewels, wall murals and gifts to the royal family. Outside the residence there is a large garage where some of the royal family’s cars are preserved including an Edsel, a Jeep, a Lincoln and a few others. Outside there is a large statue of King Sisavang Vong on the palace grounds.

We then took a short drive to a local temple where we met with a local monk who seemed more interested in his phone than speaking with us. He did not speak English so Sone was interpreting our questions and relaying the answers to us. Not a highlight of the trip.

Our next stop was the Traditional Arts & Ethnology Centre where they celebrate the ethnic cultures and diversity of the Laos people. They have 49 ethnic groups and 15 languages in the country. The museum is small but had a nice assortment of handicrafts, traditional arts and displays about some of the local groups. The museum shop was very popular with our group and many folks purchased some of the handicrafts offered for sale.

We had a huge lunch at a local restaurant where the food did not stop coming. They served a beautiful array of local dishes like spring rolls, lemongrass chicken, chicken curry, vegetable soup, rice, stir fried vegetables, eggplant and dessert. Everything was delicious but way too much food.

In the afternoon, we took an optional tour to a local village where they create several types of handicrafts including silk weavings. In the local village, they grow the silk worms, process the silk yarn, dye the yarns, all before beginning the weaving process. This village also creates a lot of handmade paper which they sell to local artist for painting on, they create paper bags, they create wrapping papers and greeting cards. Of course, they had a gift shop where you could purchase the local items and many of our folks did some damage.

We then took a short walk down to the Mekong River’s bank where we boarded a boat for a sunset boat ride on the Mekong. Onboard they served us roasted peanuts, potato chips, wine, beer and soft drinks. The ride along the river was very nice although not too much to see other than the beautiful surrounding green mountains and a few homes and villages along the river.

Dinner was back in town at a local restaurant that served us many traditional Lao dishes that we had not seen previously. Things like chips made from river weeds and barbecued water buffalo which was very tough but tasty. The dishes were plentiful and we probably sent back to the kitchen more than we ate.

All in all, our visit to Laos was very interesting. We were not that enthralled with our visit to Vientiane but we really enjoyed our time in Luang Prabang. The small-town feel, the clean streets, the charming cafes, unique restaurants, local handicraft shops and more were all very interesting. The locals in Laos were not as friendly as in Myanmar.