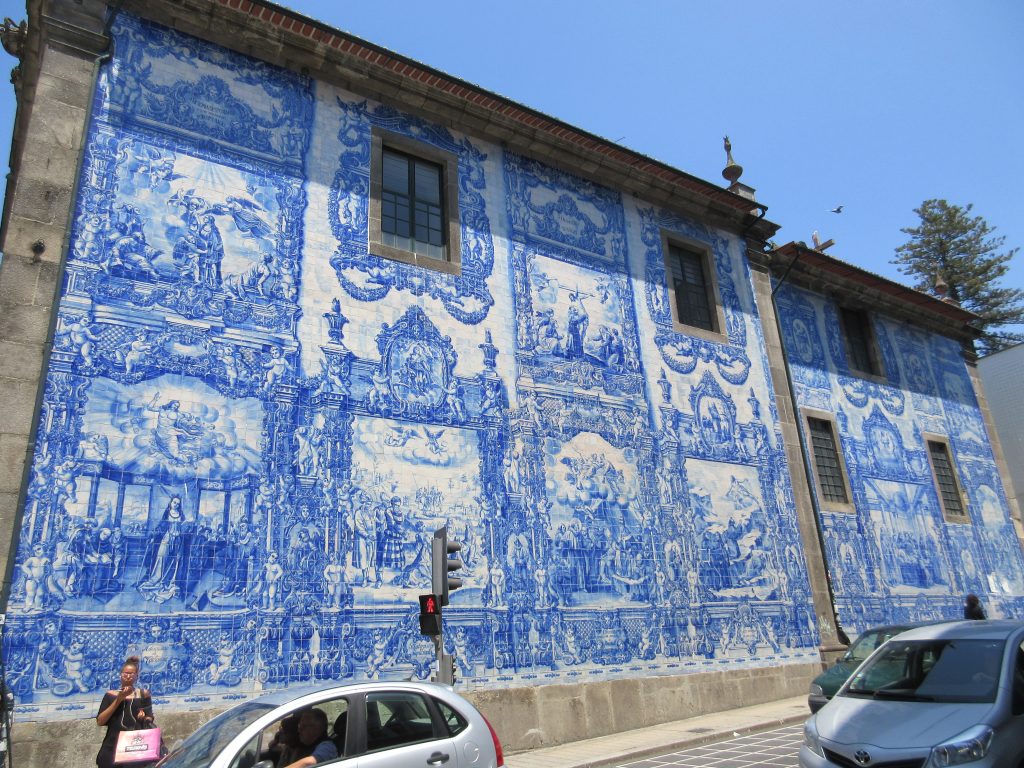 Tiled Wall on a Church 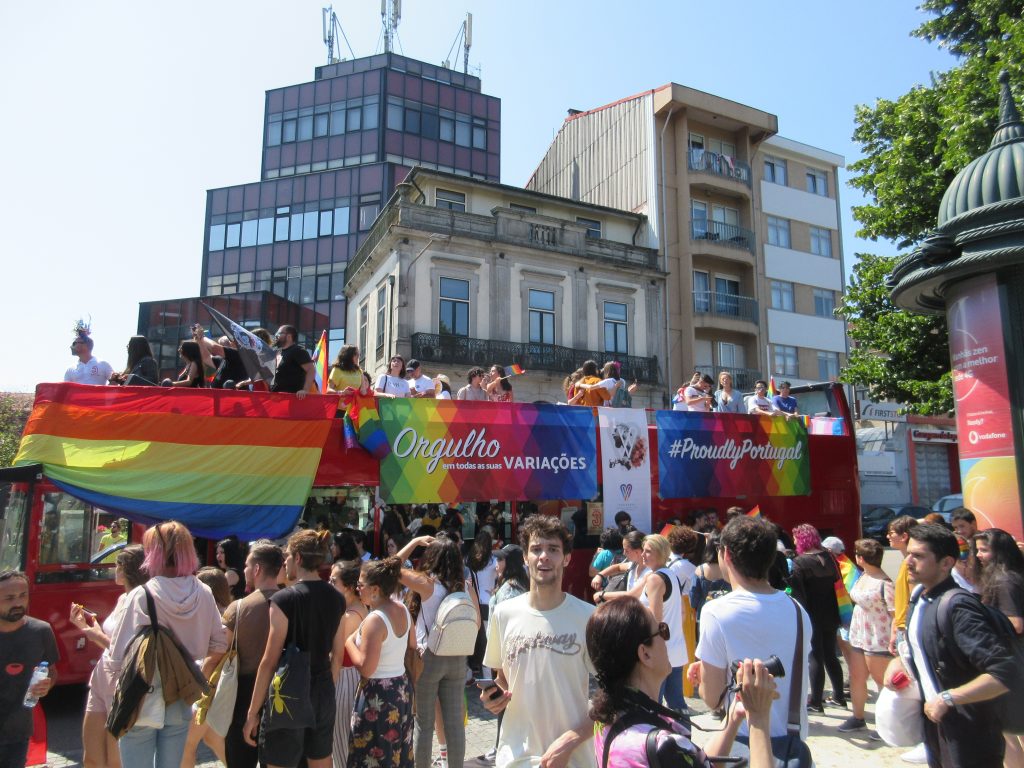 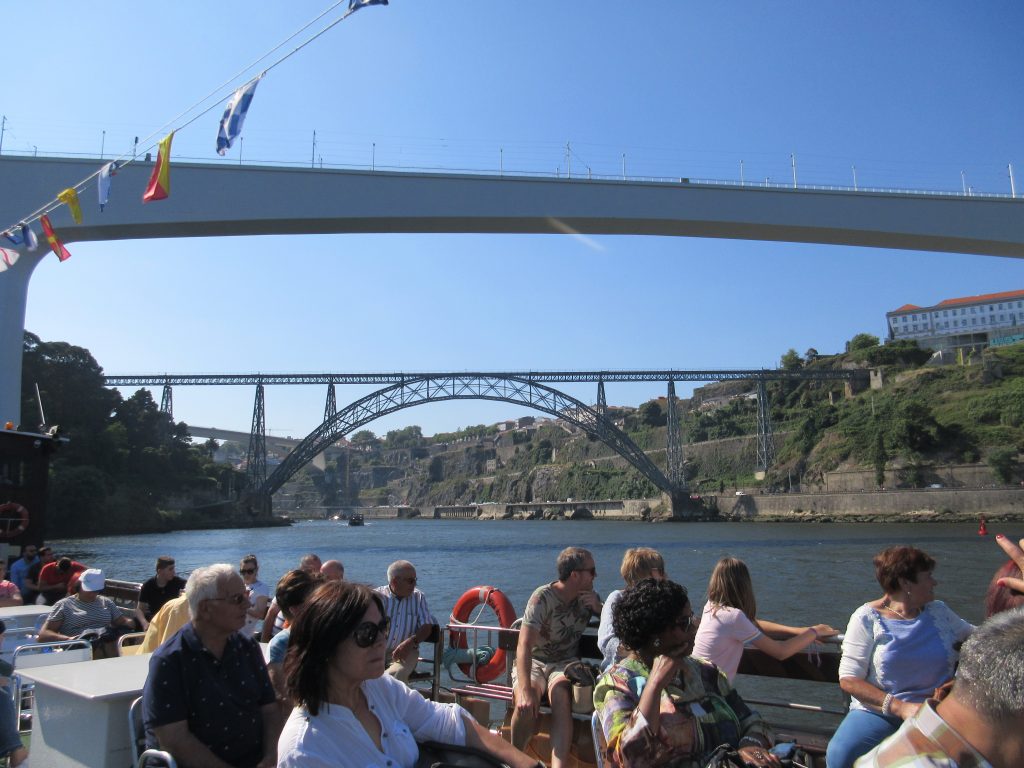 This morning we started the day with a four-hour tour of the city of Porto on the Yellow Bus tour which is a hop-on, hop-off bus tour. We toured the heart of the city’s old town area, the Gaia area across the river and then out to the beach communities along the Atlantic Ocean.

After the bus tour we had a walk along a pedestrian street called Rua de Santa Catarina. When we were walking we kept seeing people wearing rainbow flags and began to think that it might be Pride weekend here in Porto. Kent asked a few folks about a parade and we found out that, indeed, there was a parade at 3:00pm starting at the Pracaa de Republic nearby. We stopped in to the food court at a local shopping center and had an unusual lunch at a new Tajikistan restaurant. Tajikistan, just in case you were wondering, is located in central Asia with 8.7 million people. It is bordered by Afghanistan to the south, Uzbekistan to the west, Kyrgyzstan to the north and China to the east. The lunch we had was a sampler plate with two dumplings, one filled with pumpkin and the second with beef. There were both chicken or beef kabobs on a stick with onions, a triangle shaped pastry filled with beef and a berry drink similar to Kool-Aid.

After lunch we headed over to the park to see what a pride parade in Portugal might look like. There were maybe a couple thousand people gathering in the park, many wearing or carrying rainbow flags and a few drag queens. About 4:00pm the police began closing off the street and allowing the gathered crowd to parade down the streets to another gathering place for a celebration. Some carried banners but there was not much organization, no sign of organized groups, floats or marching bands. We stayed to watch the group begin the march but then headed on our way.

We then took an hour-long harbor tour to see the six bridges that span the Douro River. These six bridges include a bridge designed by Gustav Eiffel to carry train traffic that is no longer in service but is a national monument now. Most of the bridges carry vehicular traffic easing congestion between the two sides of the river.

Some general observations by Kent: Toilets – they are all very clean and clearly marked. However, most of the actual toilets don’t have seats, similar to those in Southern Italy and Sicily. There, we were told that the seats break easily and are not replaced due to the expense. Perhaps that is the reason here also.

Moustaches and black dresses — in 1970 when Kent first traveled to Lisbon and environs, he noticed many older ladies in black dresses with little moustaches. So cute! However, this time in Portugal, Kent has not seen but one lady with a moustache. …and no black dresses to commemorate the loss of a loved one. It could be something new in the culture, new beauty products, or luck!

Politeness – or lack thereof. No one in Madeira or Porto ever says “Excuse me” or any other “pardon” word when they step or cross in front of you. Nor do they say it when we might say it in our regular daily life. WTF?
Smoking — lots of people smoke here. We can be in an outdoor restaurant and the person next to us is smoking. You see women and men smoking along the street and in parks…..they love to smoke. We’ve never seen any kinds of signs encouraging people not to smoke.

Streets – the streets, parks, trollies are generally clean. We don’t see “don’t litter” signs, but something is working. Great job!

Fear of falling – in Argentina Kent rolled out of bed and tore his meniscus; in Croatia he fell down the stairs on a yacht and broke his arm. Since then he has a fear of falling and hurting himself as he is not as stable walking as he once was (he’s not getting any younger). So, the first day here, we walked about 4 miles and today we walked about 4 hours on cobblestones and he still has his fingers crossed that “all will be well!” Wish him luck.