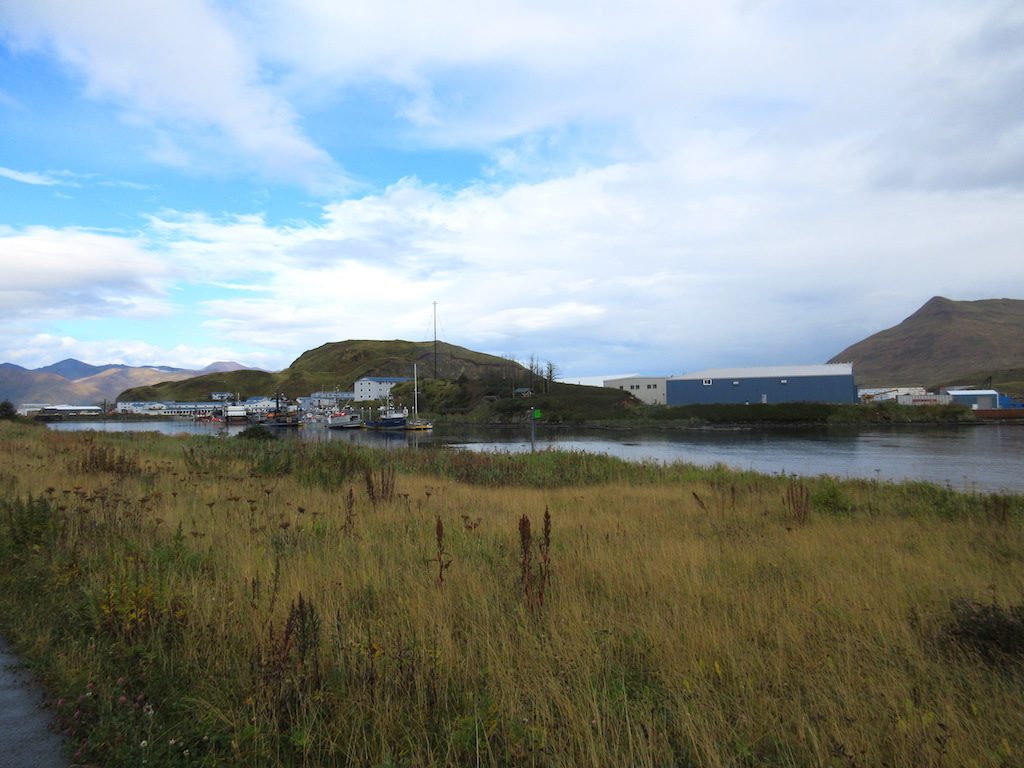 Sunrise was not until about 9:15am this morning. Dutch Harbor is located in the Aleutian Islands of Alaska with a population of about 4,500 inhabitants. Dutch Harbor in the 1760’s was part of the Russian fur trade and until the mid 20th-century, natives, Russians and their descendants comprised most of the population. The name Dutch Harbor is really the name of the bay located between the islands of Unalaska and Amaknak. In the 1890’s a dock was built on Dutch Harbor and folks began booking passage to Dutch Harbor. During World War II the military built a runway next to Dutch Harbor and after the war private airlines took over the runway and booked people on flights to Dutch Harbor.

The US purchased Alaska on October 18, 1867 making Unalaska part of the US territory. The US Navy recommended that a base be built here in 1938 with the first army and navy troops arriving in 1941. Dutch Harbor is one of the few sites, besides the attack on Pearl Harbor in Hawaii in American territory, to be bombed by the Japanese during World War II. On June 3, 1942, 20 Japanese planes from two aircraft carriers of the Imperial Japanese Navy bombed Dutch Harbor targeting the radio station and the petroleum storage tanks. 43 Americans died during the attack that lasted two days. By 1943 there was a peak of 10,151 sailors and 9,976 soldiers stationed here.

In the 1950’s, Unalaska became the center of the Alaskan king crab fishing industry and by 1978 it was the largest fishing port in the US. A 1982 crash in king crab harvests decimated the industry and the mid 1980’s saw a transition to bottom fishing. Today, Dutch Harbor is ranked as one of the top fishing ports with more than a billion dollars transferred each year. Huge harvests of pollock and cod from the Bering Sea are part of this total. The Discovery Channel reality television series Deadliest Catch has been filmed here since 2005.

The town offered guests the opportunity to take a school bus into the town center where there is a Safeway supermarket, a fishing supply store and a hotel. The ride took us less than ten minutes but it had begun to rain about the time we arrived into town.

We walked the 2.4 miles to the local Russian Orthodox Church in the rain. In 1825, the Russian Orthodox Church of the Holy Ascension was built in Unalaska and it still stands today. It is one of the oldest churches in Alaska and is significant as the site from which Missionaries brought their religion to the local Aleut people. The young priest was giving the tourists a history lesson on the three-room church and its altars with many icons painted on canvas. Given the distance to the church and the weather, there were not many ship passengers who found their way to the church. By the time we left the church the weather had improved dramatically and the sun came out making the walk back to the Safeway so much more enjoyable. We joined our fellow passengers, Anna and Sandy, who also live in our condo building in San Diego, on the walk back.

The winding streets of the islands follow the sea making the walking fairly easy. The surrounding hillsides were covered in a multitude of hues of greens and golds as the fall colors began to set into the vegetation. The only other color remaining was some lavender colored clover flowers. Many bald eagles were spotted around the town on top of ship masts, telephone poles and light posts. One couple of eagles even had a juvenile with it. Several fur seals were spotted in the water as we crossed a bridge from one island to the next. At the sailaway party in the crow’s nest we were able to spot several whales as we sailed out of Dutch Harbor.

The evening’s entertainment was called Alaska in Concert. This beautifully produced film showing scenes of Alaska produced by BBC Earth was accompanied by seven of the musicians onboard. The film showed extraordinary scenes of bears, whales, salmon, foxes, bald eagles and more in their natural habitats.