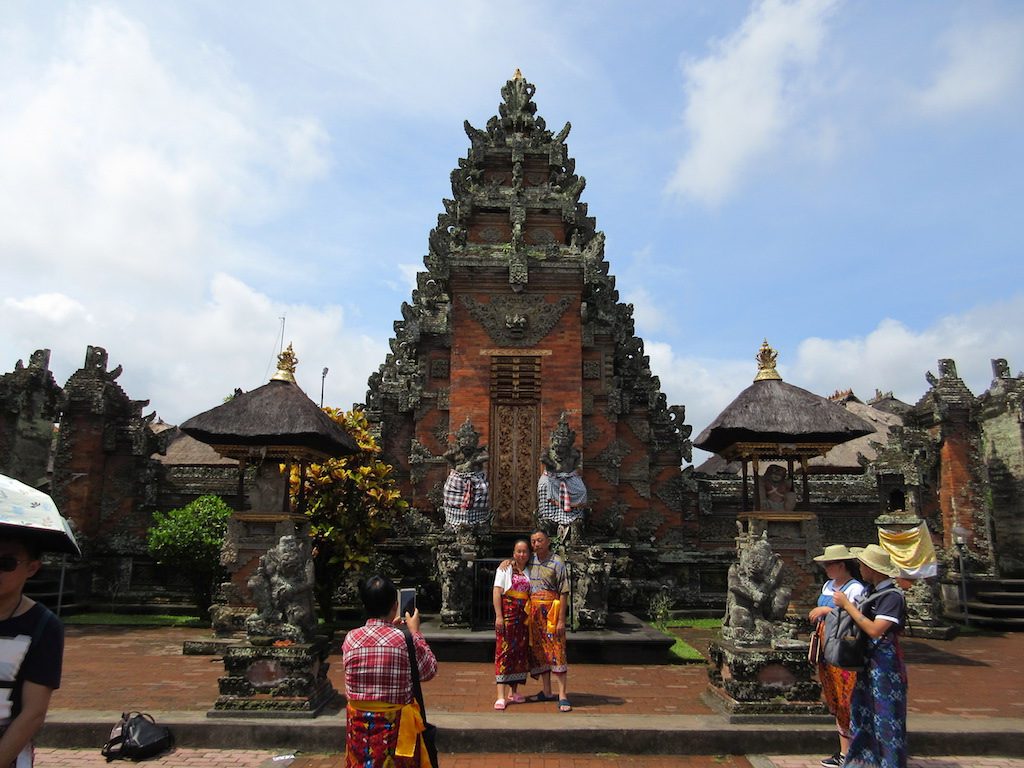 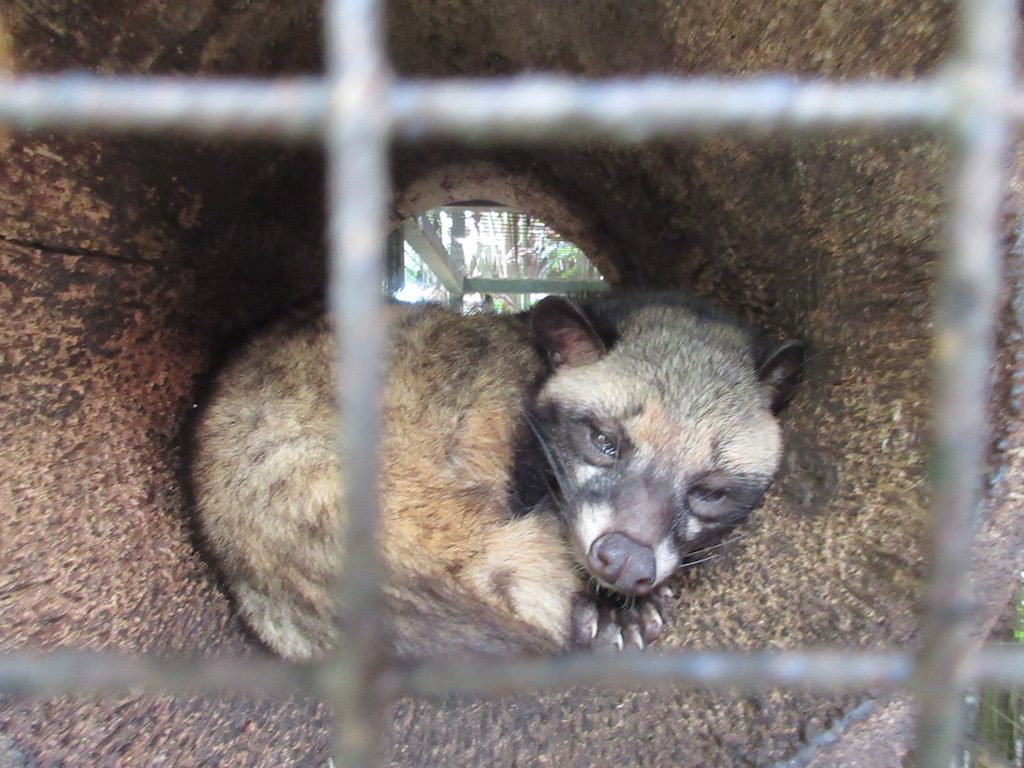 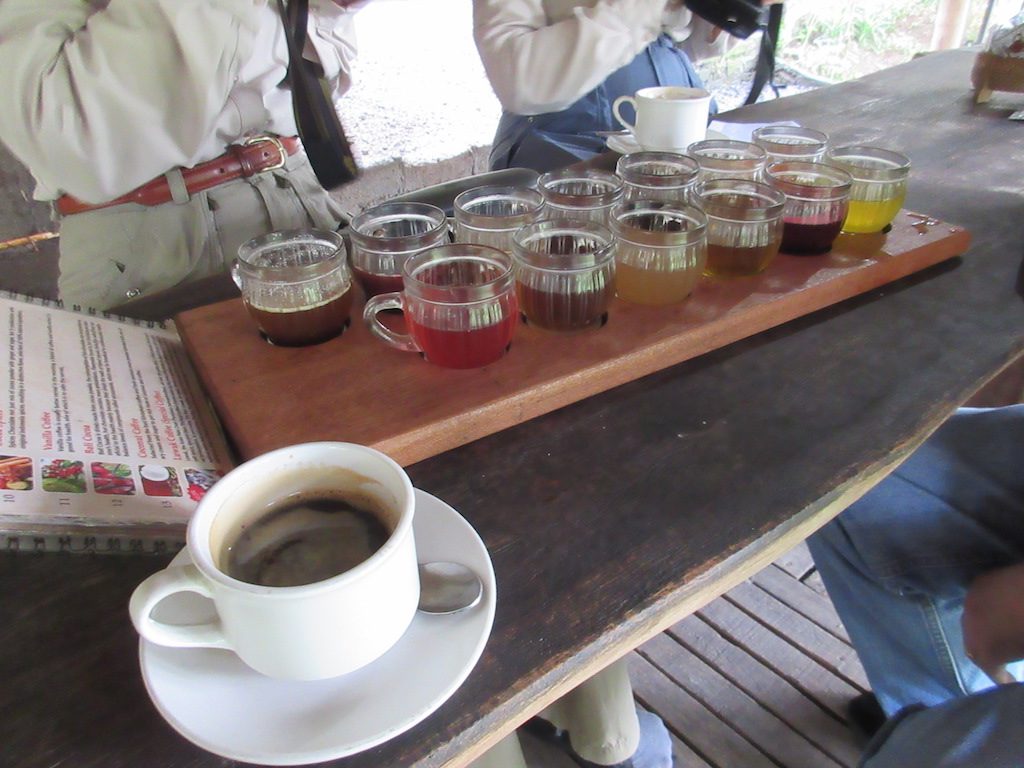 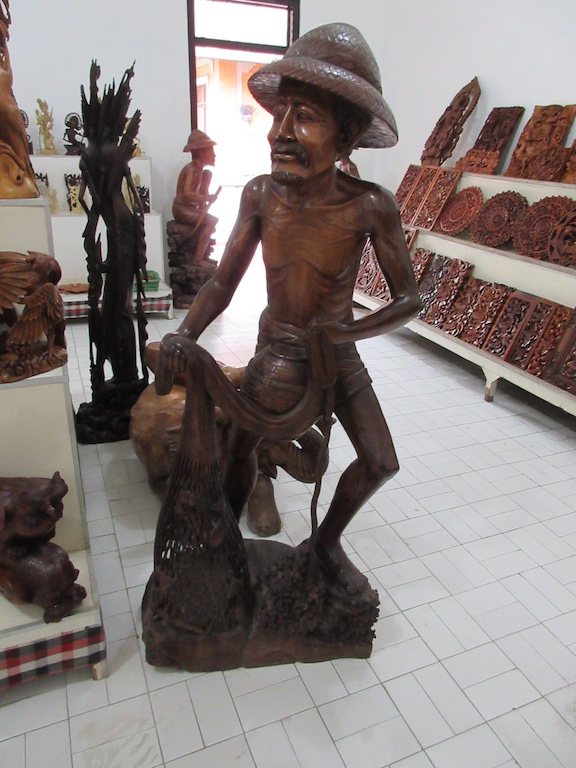 Benoa is the name of the port that is located near the capital city of Bali called Denpasar with a population of about 850,000 residents. The white sandy beaches of Bali are well known all over the world and attract international travelers for surfing, sun bathing and kitesurfing. The local economy includes handicrafts like art, pottery, textiles and silver. The colorful Batik fabrics are made into many useful items, including men’s shirts and sarongs, and are found everywhere.

The Balinese people are largely Hindu and are extremely devout. Life on the island revolves around prayers and ceremonies. Many of the ship’s crewmembers are from Bali and they had the opportunity to visit with their families both on and off the ship today.

We spent the day with our San Diego neighbors, Sandra and Ana, who had invited us to share the expense of a driver/guide for the day. The guide picked us up at the port about 9:00am and we headed north from the port towards Ubud. Our first stop was at a Batik making shop where Sandra found some hand-woven fabrics to sew into various items.

Our next stop was at a coffee plantation with a tasting room and shop. The specialty coffee is the Kopi Luwak Coffee from this region of the world. The Luwak coffee is produced from a coffee bean that has been eaten, digested and excreted by the civet cat, a shy, nocturnal, Indonesian mammal with a taste for coffee beans. They had a number of cages with the civet cats in them for us to see.

After seeing the mostly sleeping cats, we were shown a demonstration of how the coffee is prepared and roasted. After the demonstration we were taken to a covered bamboo structure in the jungle where we could taste the teas and coffees that they produce. They brought us six flavored teas and seven flavored coffees to try. If you wanted to try the civet cat coffee you needed to purchase a cup. Of course, we ordered a couple of cups to taste. The teas tasted like they had all been sweetened although there were a few of the coffees and teas that we all enjoyed. We also enjoyed creating our own flavors by mixing some of the flavors together. The civet coffee was nothing special to our taste buds and so we left without purchasing a thing.

Next on our trip was a stop at a wood carving shop where we saw a couple of people working on wood carvings and as usual they had a very large shop to purchase something. We particularly enjoyed the large phallic bottle openers! No purchases once again.

Next, we stopped at a beautiful rice terraced valley called Tagalagang where the hillsides have been terraced from top to bottom over many years of working the fields. This rice terrace was a bit of a tourist spot as they had a restaurant, some swings on long ropes that swung over the rice field canyon, a zip line to cross the rice field canyon and many souvenir shops along the road.

The roads in this area are very busy with cars, trucks and countless motorcycles zipping in and out of the traffic. Many of the roads are narrow and winding making it necessary to stop the car and let others pass. Also, it is not uncommon to come across sand, gravel, bricks or something that has been delivered and simply dumped into one lane of the road until it can be moved one wheelbarrow at a time. Our driver handled it all very well. Many of the streets have shop after shop filled with stone carvings, wood carvings, batik clothing or other merchandise right next to the road’s edge. You also see one temple after another along the way as there are more than 2,000 temples in the area. There is so much to see that it is all like a blur as you travel along the roads.

We then stopped at the Batuan Temple in the namesake village of Batuan that is well known for its traditional Balinese arts and paintings. The Balinese temple features a grand complex of shrines laid out on a large site dating back to the 11th century. Here we saw well preserved sandstone reliefs and many small temple buildings within the complex. Many buildings were ornately painted with gold trim.

We made our next stop at the Waterfall Tegenungan Village where we saw a large waterfall from the Tukad Petanu River. There were heavy rains the night before so the waterfall was extremely large on this day and the water was very muddy from the silt the water had picked up along the way. It is a bit of a hike down large steep uneven steps to the waterfall although you can see it from the canyons ridge above.

We stopped at one more wood carving shop and art center before heading back to the ship for the day. The traffic was not to heavy so we returned to the ship about 5:00pm. It was a good day.

Onboard the ship they were showing the Julia Roberts movie Eat, Pray, Love so we saw that before a later than usual dinner. We attended the late show at 10:00pm for the first time this voyage where there were only about 25 guests present. The evening’s entertainer was Tian Jiang, the pianist who we had heard a few nights before. This time he performed an entire show of classical music.