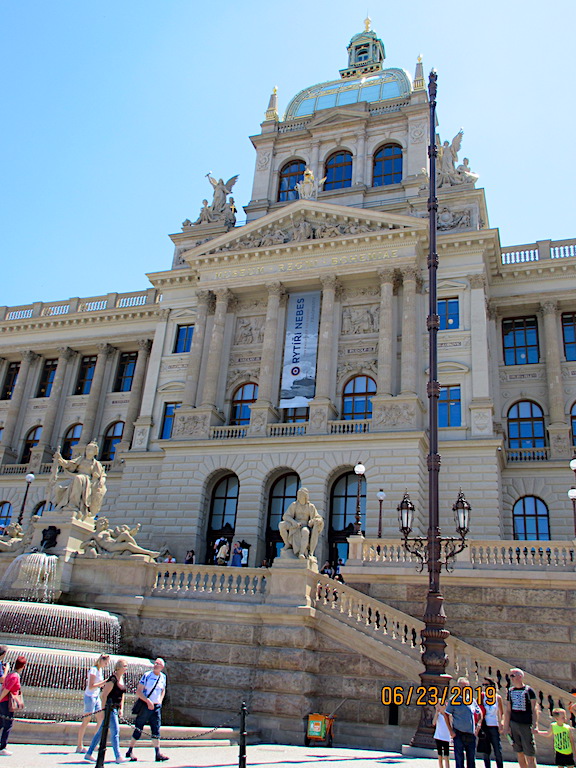 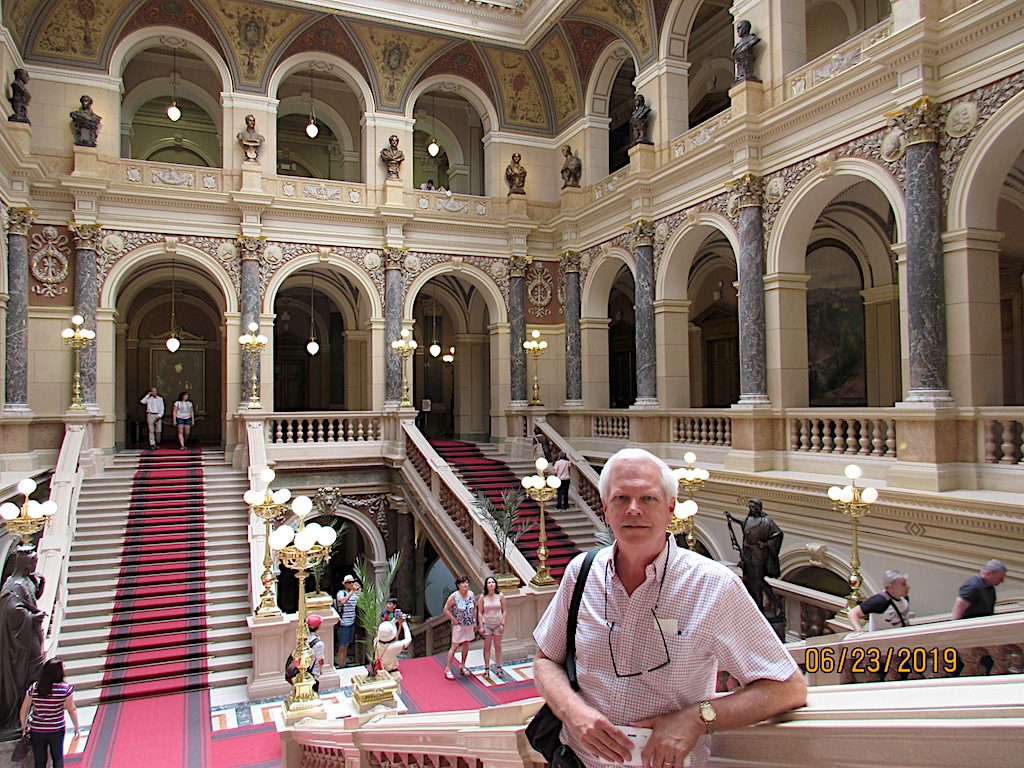 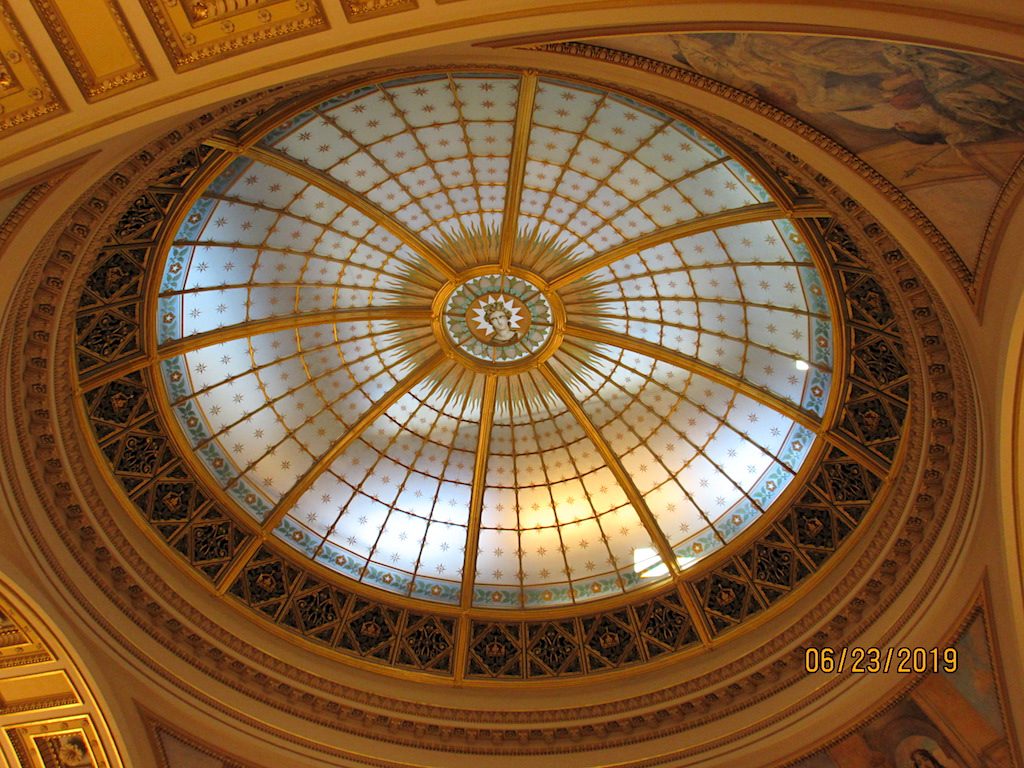 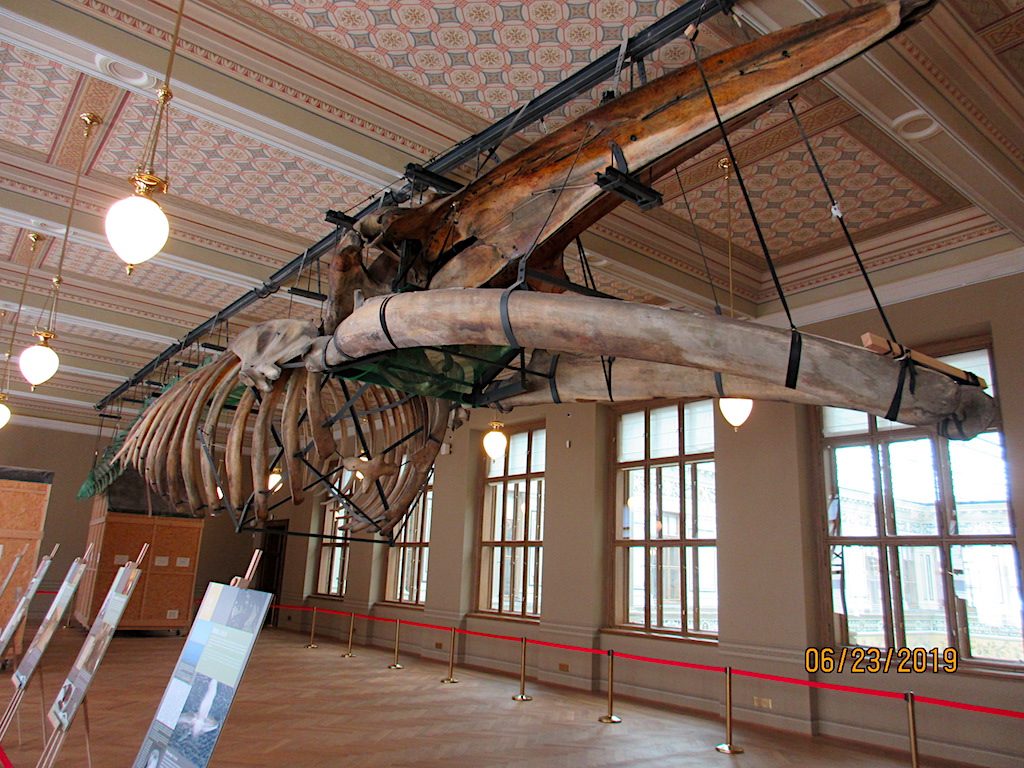 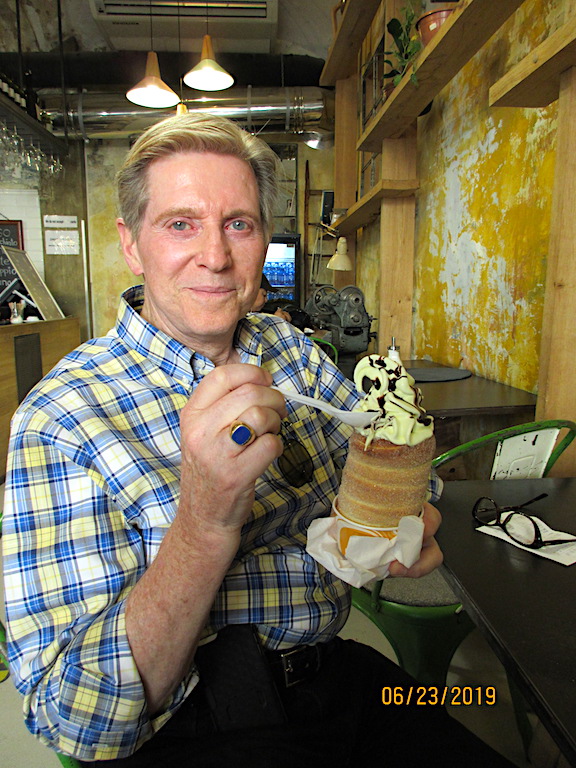 Today was a free day to explore the city of Prague further on our own. We started out the day looking for a new suitcase for Mark to replace the one that was damaged by the airlines. We did find one across town at a large shopping mall but then had to drag it back across town on the cobblestone streets and sidewalks.

After a short rest at the hotel we headed to the National Museum which was just partially reopened on October 28, 2018, after being closed for seven years for extensive restoration. The museum has been located in this location since 1891 so I am certain it was due for a facelift. The Neo-Renaissance building has been beautifully upgraded and restored although not all of the exhibits will be open for another year or so. The entire collection of the museum consists of over 20 million items so only a fraction of the collection can be on display at any given time.

The first exhibit we saw was called “Knights of the Heaven.” About eighty years ago, in 1939, many Czechoslovak pilots left for Great Britain, where they joined the newly created Czechoslovak Squadron of the Royal Air Force. The exhibit tells their stories and includes photographs, a film, uniforms and biographical information on many of the people who served. It was interesting to see that many women also served even though they were not pilots but had many support jobs.

The next exhibit that was open was about the Czech-Slovaks/Slovak-Czechs. This year marks a century from the foundation of Czechoslovakia, a state formed by two different parts of the Habsburg Empire. They shared a joint cultural history of great diversity. The exhibit includes a wide variety of information about the successes and failures the state went through during its existence. The exhibit included information about the education system, religion, media, the documents that created the joint state, the items manufactured in the country during that time, as well as everyday items that people might remember from that time.

The museum has had a full skeleton of a whale on display since the museum opened and it is now back on display in a newly renovated space. Since the skeleton was too fragile to move during the renovation it was decided to surround it with a protective structure and to leave it in place. The room has been transformed and soon the skeleton will be cleaned and restored as well for its next century of visitors.

The final exhibit currently on display is an anniversary celebration of two centuries since the museum has been in existence. Here they have pulled together about 200 of the most interesting pieces out of the 20 million in the collection. This means that the items on display were a mismatch of all sorts of items but each very interesting in its own way. There were priceless jewelry pieces to taxidermy animals and an 1818 stamp, along with the wedding dress of Marie Louise, Duchess of Prague in 1810.

For a little break from the museum we ventured down the street for Kent to find the local tourist treat called the Trdelnik or Chimney Cake. Originally from the Hungarian speaking part of Transylvania in today’s Romania, this dessert has penetrated to many other places. The name refers to the wooden tool that the dessert is made on. It is a cone shaped wooden rolling pin of sorts that a bread dough is wrapped around creating a cone or chimney shaped bread ring. The wooden pin is then turned over an open flame to cook the bread dough until it is slightly browned and crispy. Traditionally it would have been served plain but today, for the tourists they coat it with things like chocolate and fill it with ice cream. It is mostly a tourist treat and not something the locals would fix for themselves.

After the less than delicious dessert treat we headed to another National Museum building where we saw one more exhibit. This building was once the Prague Stock Exchange, then as the Parliament building, a radio studio and then a part of the museum since 2009. On display here was an exhibit on the Celts who are believed to have lived in Europe as early as 1200 BC. The museum here has a very nice collection of archeological finds from graves including coins, tools, ornamentation and more.

In the evening we at met up with one of our former students from Czech Republic by the name of Michal Holas. Michal is now working in China but was back in Prague on this day for a conference. He has a law degree and works with Czech companies who want to do business in China by assisting with contacts, documents, etc. He is looking well and has a girlfriend of five years who is a student just finishing her studies to become a dentist.

As we have made our various stops, we have enjoyed chatting up the locals and tourists….mostly younger men. We have met guys from Spain, Sweden, Finland and a couple of Italians who play clarinet in the military band. We also encountered a young man and his family from China and a bartender from Ukraine in a restaurant we stopped in to have lunch. He is heading to the USA to visit Florida soon. We me another student from Ukraine who is studying here and selling Hop On-Hop Off bus tickets. All seemed willing to chat, share their information and inquire about us. One Italian thought Kent looked like “Ron Howard…but much older!” Enough of that.