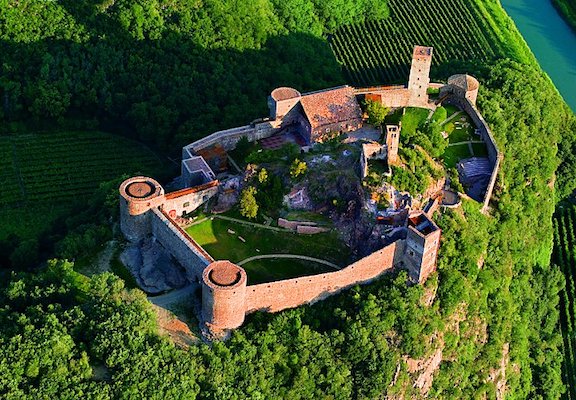 This was a free day for everyone to do whatever they wanted to do rather than having a planned day of activities. Mark was still feeling a bit under the weather from his fall yesterday so he stayed close to the hotel. Kent went with Susan (60-year-old daughter) and Dale (80-year-old mom) on the Gondola down to Bolzano where they took a taxi to the Messner Mountain Museum.

The Messner Mountain Museum addresses the subjects of man’s encounter with the mountains. The museum is organized as an itinerary between the various works of art, installations and relics that it houses. The paths, stairs and towers lead visitors from the depths of the mountain, where their origins and exploitation are brought to life, and the religious significance of the peaks are an aid to orientation and a bridge beyond, to the history of mountaineering and the alpine tourist industry as we know today.

The museum castle squats on a spur of Mitterberg overlooking the confluence of the rivers Etsch and Eisack at the edge of Bolzano. Sigmundskron was always something special which at the time was called Formicaria or the Rinkelstein Castle; it is one of the oldest castles in South Tyrol and, with its five-meter-thick walls, an early example of the art of fortified construction. 945 A.D. is the year of the earliest extant record of the castle.