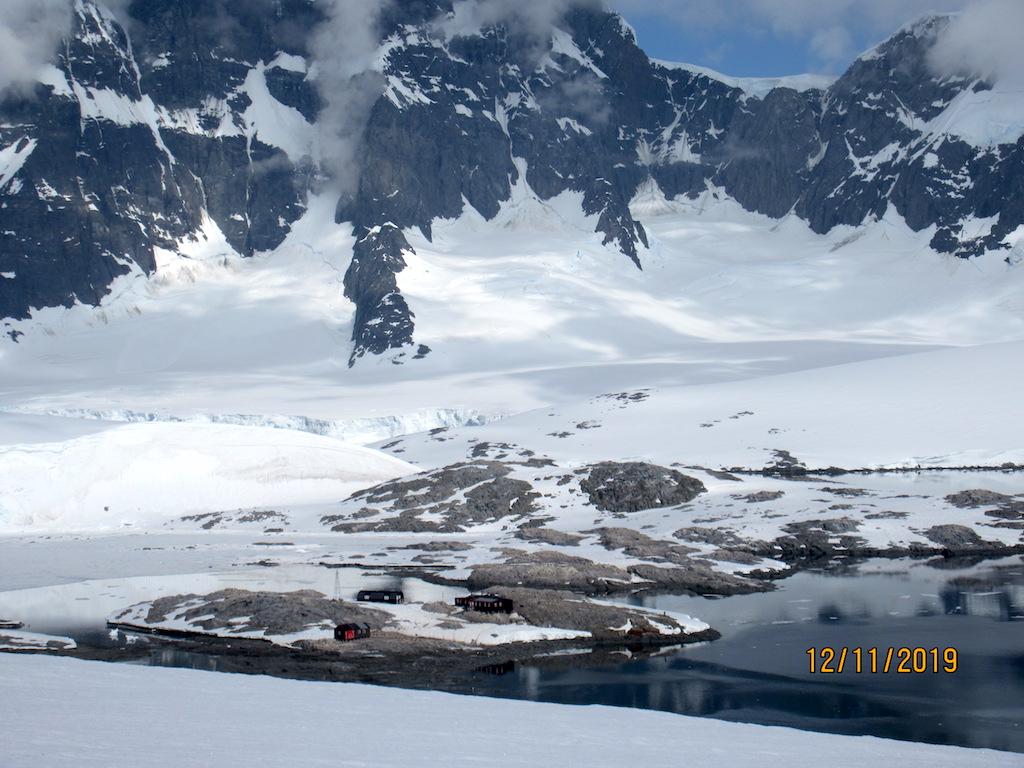 Kent with the Explorers Tent 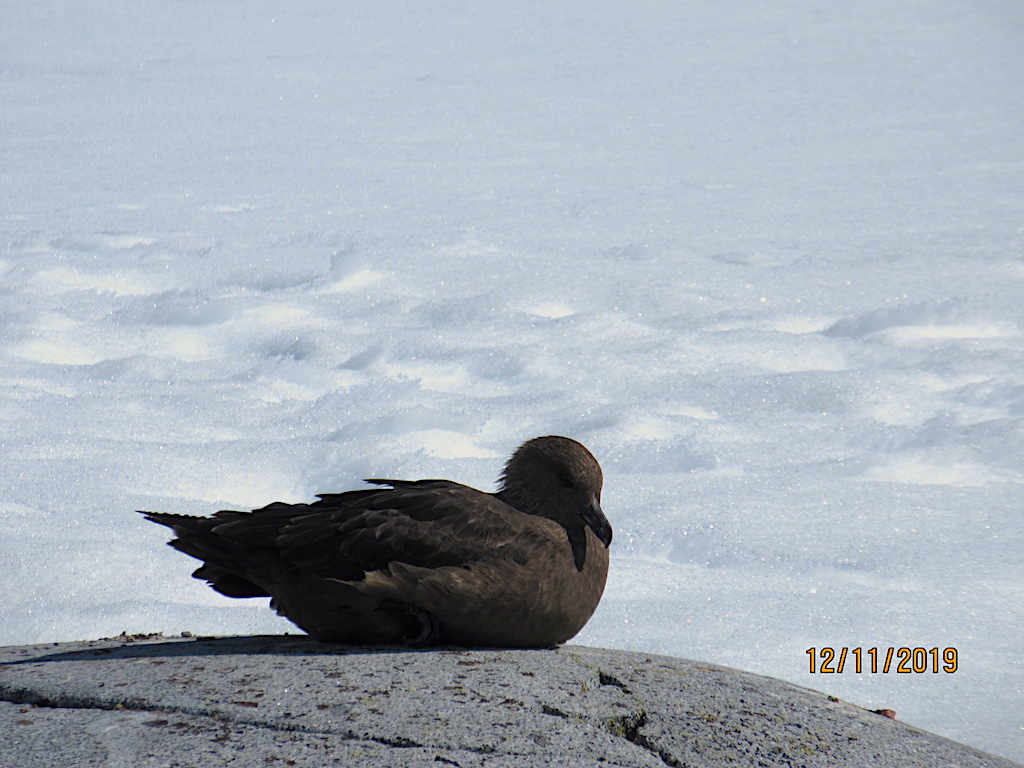 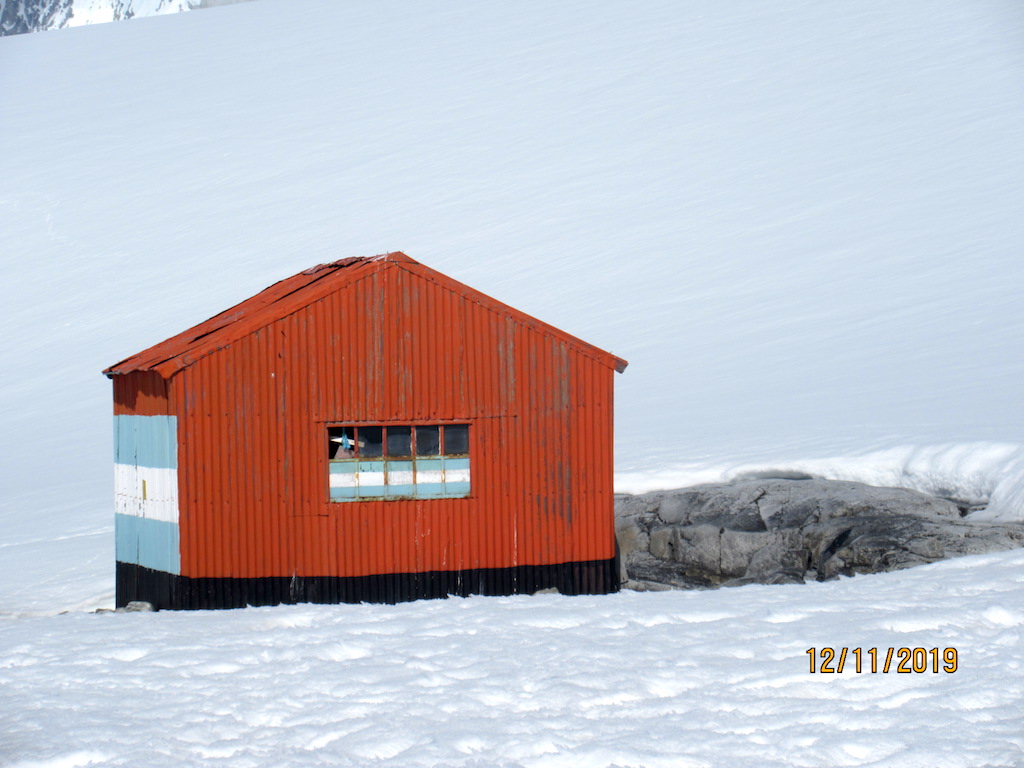 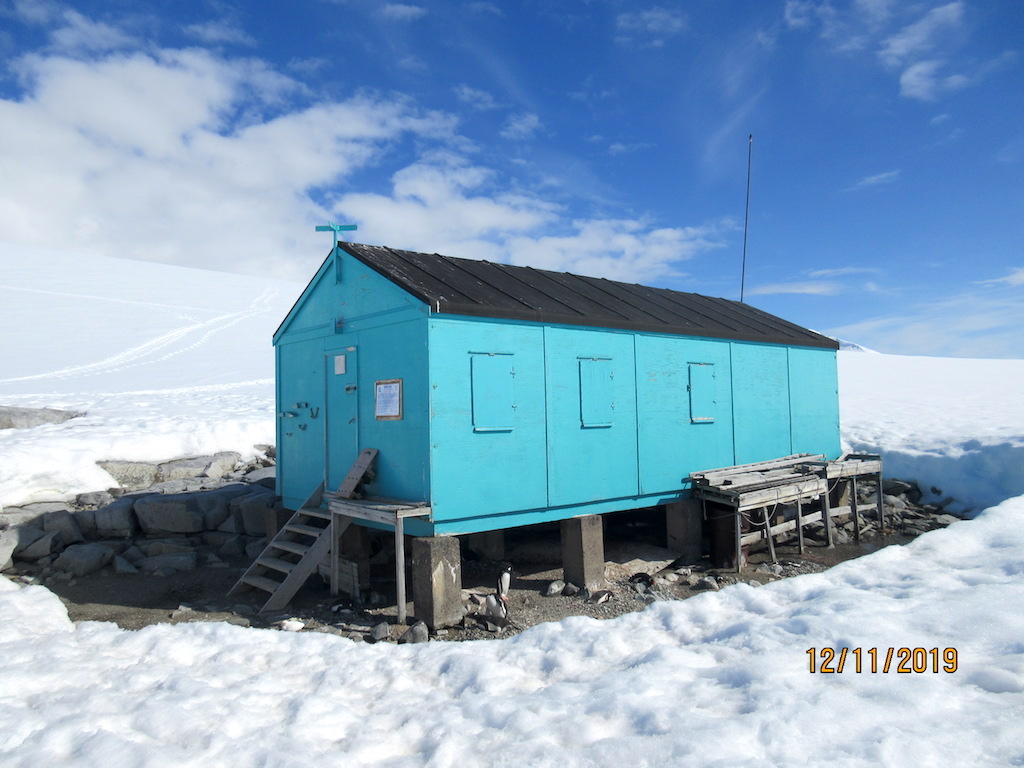 This was our last stop before we began our journey back towards Ushuaia, Argentina, and our return to civilization. When we awoke in the morning the sun was once again shining brightly and white mountains surrounded us in every direction. The water was scattered with chunks of ice ranging in size from small to very large. The temperature was a comfortable 40 degrees Fahrenheit with no wind.

The landing site on this day was located on a small rounded hill with several penguin rookeries. Some guests headed out first for a snowshoe outing or a photography expedition in the snow. This is a paid adventure similar to the camping out and we did not feel compelled to pay to spend more time out in the snow and ice.

After breakfast in the dining room, we attended a lecture with a biologist onboard who spoke about the different birds found in this region of Antarctica. For it being so cold, there are quite a few birds that not only live in the region, but also nest and reproduce in Antarctica. Since there are no trees, grasses or vegetation (only algae and lichen), most of these birds rely on fish to survive. There are some however who rely on other birds’ eggs, chicks or dead animals to survive. The largest birds in the area have wing spans of about ten feet across which is just amazing. Most of the birds are white or shades of brown, black and white to blend in with the environment.

We were scheduled to go ashore about 2:30pm but the snowshoe group had not yet returned to the ship. Since the ship can only have 100 guests ashore at any time we had to wait to depart until about 3:15pm when more guests had returned to the ship. The skies were clear and sunny and the temperature was very warm. We wore lighter layers of clothes but it was still very warm hiking up the hillsides.

Damoy Point has a series of gently sloping hills leading up to the site of an ice airplane runway and a British Antarctic Survey hut built in 1973 and last used in 1993. Today the site has been repaired and converted to a mini museum. Unfortunately, it was closed on this day. There is also an Argentinean emergency shelter built in 1953. The views of the bay and the surrounding mountains from the airstrip are spectacular. We saw several penguin rookeries with busy penguins moving stones and a Skua bird resting on a rock. The ship had put up a small tent similar to one that had been used by previous explorers (Roald Amundsen) so guests could take photos next to it.

From the runway you could see down the hillside to Port Lockroy where you can find the most southerly operational post office in the world. The bay was discovered in 1904 and used for whaling between 1911 and 1931. During World War II, the British military established the Port Lockroy Station A on tiny Goudier Island in the bay. The station continued to operate as a British research station until 1962. In 1996 the station was renovated and is now a museum and post office operated by the United Kingdom Antarctic Heritage Trust. A staff of four typically processes 70,000 pieces of mail sent by 18,000 visitors who arrive by ship during the five-month Antarctic cruise season. Unfortunately, it was closed on the day we visited the area.

The crew put on a talent show at 10:00pm where many of the ship’s crew had a part to play. The panorama lounge was packed with guests who came out to support the crew. The crew sang songs, performed modern dances, Pilipino folk dances, played the violin and more for about an hour. Some of the performances were good, others not so good, but the crew seemed to be enjoying themselves and the guests had a good time as well.