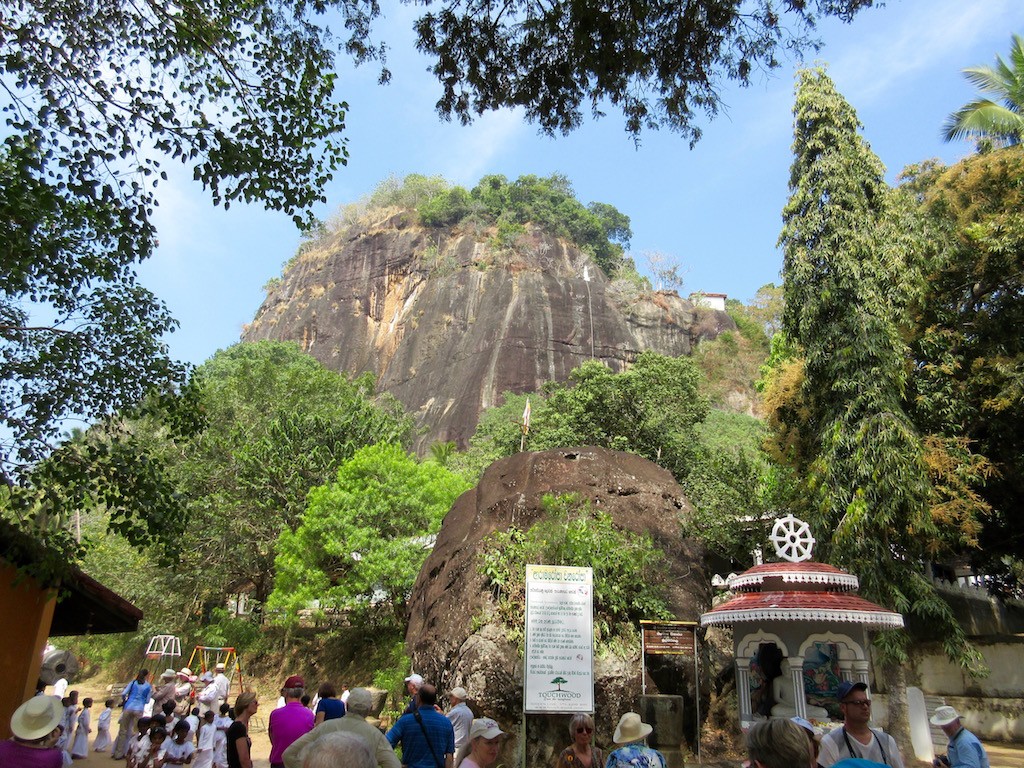 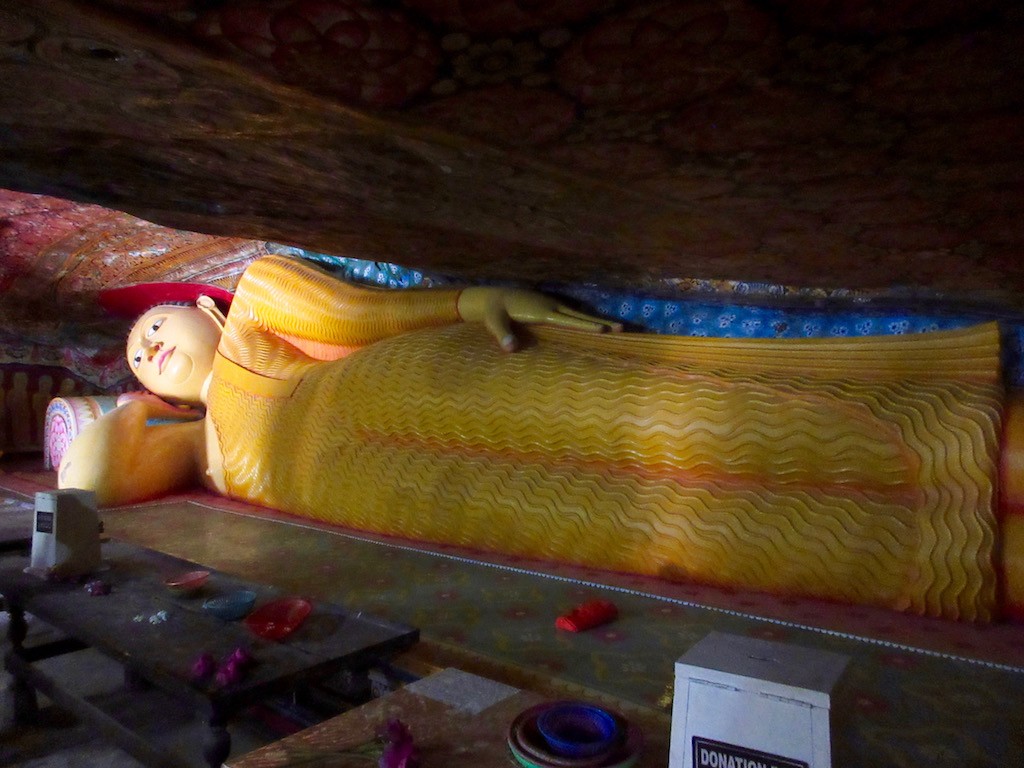 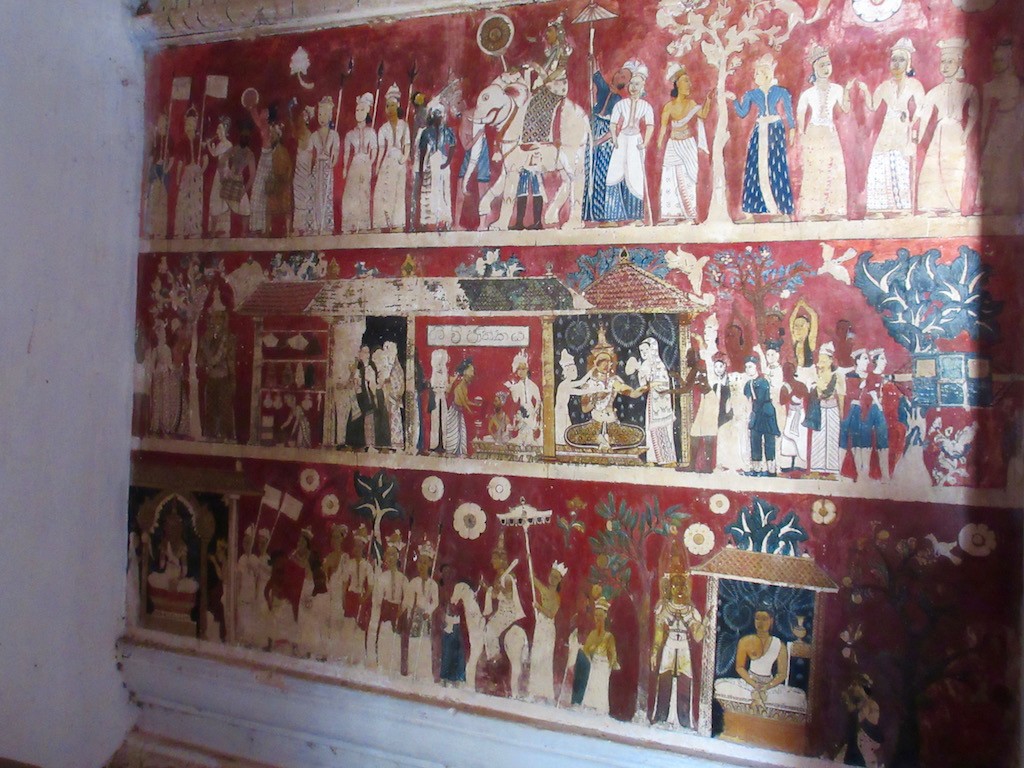 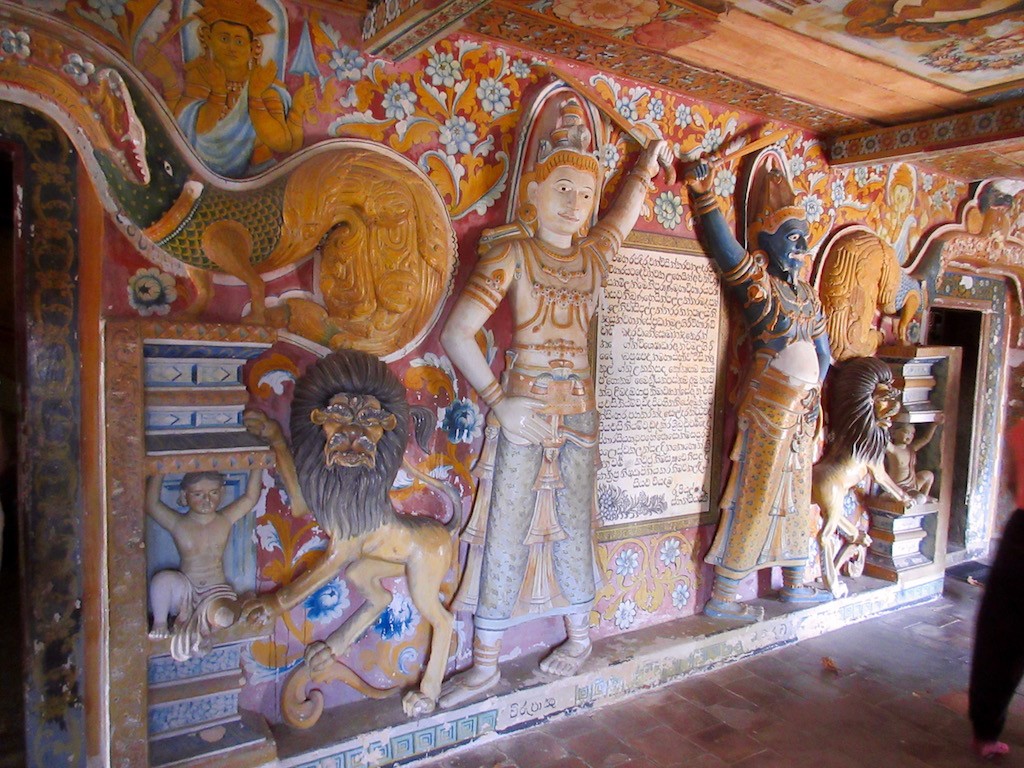 Sri Lanka, formerly known as Ceylon, is located to the south and east of the lower tip of India in the Indian Ocean. The island is 5 degrees north of the equator and has a population of 22 million inhabitants. Hambantota is located on the southern coast of Sri Lanka and was partially destroyed in 2004 by an Indian Ocean earthquake and a Tsunami that followed. After the earthquake and tsunami, they began to build a new port to accommodate the 36,000 ships and 4,500 oil tankers that use this route each year. The harbor opened in 2010– although they were not able to dredge the new harbor as deep as they had planned to, due to rock formations.

Hambantota has large salt flats along the coast that attract a large number of shore birds including pelicans and flamingos. The island has several national parks where wildlife–like tigers, elephants, water buffalo, leopards and elephants–can be seen.

Our destination was the Mulkirigala Temple, with its seven painted caves, located about 90 minutes from the port by bus. Our bus was older with poor air conditioning so the ride was not particularly pleasant. The temple is created out of a huge rock formation standing 676 feet tall, and dating back to 130 BC. The origin of the temple is unclear, but it is said that Buddhist monks who had achieved the state of supreme enlightenment, lit a lamp with mustard oil here so that it could last for 5,000 years, until the birth of the next Buddha. Within this rock formation there are seven large cave temples that have been painted with fine murals over the years. It is believed that the current fresco murals were painted in the 1700’s and depict the different stages of a Buddha’s life. Each cave tells a different story. In some of the paintings Portuguese and Dutch uniforms can be seen signifying the advent of the European colonization of Sri Lanka. Also found in the caves are various statues of Buddha, reclining, sitting and standing.

The climb to the top of the rock formation is about 550 stone steps with many of them uneven and different sizes, making the climb strenuous. The heat and humidity also added to the difficulty. We spent about two hours at the cave site before heading back to the ship via our old bus. Not long after we left the caves our bus decided that it was also hot and tired and wanted a rest. With no air conditioning working on the bus and a problem with the clutch, we stopped along a beautiful lake. The guide bought everyone fresh coconuts for the water from a roadside stand while we waited for a replacement bus. About 45 minutes passed before a beautiful new bus with great air conditioning arrived to return us to the ship. The guide was apologetic and most of the passengers understood, so all was good.

The countryside here is very beautiful with large bodies of water filled with lotus and water lilies. The fields are filled with lush green rice fields and the homes are fairly well maintained. The homes are mostly made of brick with clay tile roofs or thatched roofs made from coconut palm fronds. We came across some water buffalo roaming the streets; saw some small monkeys, large lizards and many varieties of birds.

We watched the movie titled “Steve Jobs” in the movie theater before dinner. After dinner we attended the Filipino crew show featuring about fifteen members of the crew. They did an excellent job of presenting their country’s folk dances as well as a couple of solo performances of current songs.