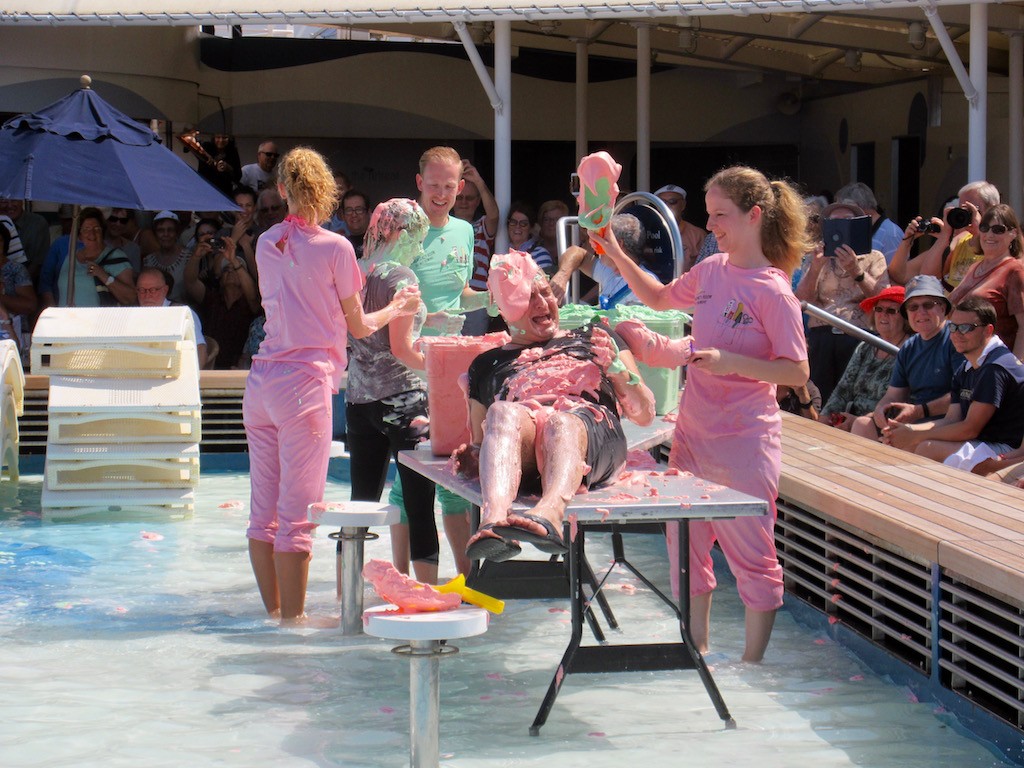 The ship is fully booked for this segment, and it is abundantly clear when you try to get something to eat or find a poolside chair. Every available space seems to be filled with people. Hopefully, in a few days when the new guests are more familiar with the ship and where to find things, it will settle down. At the same time, we are missing some of our traveling friends who disembarked the ship in Singapore.

We enjoyed a new guest speaker by the name of Barry Dryer who spoke on the Java man and the early settlers of Indonesia. They now believe there were more than one species of human-like people living on the planet at the same time. Homo Sapiens who were our ancestors may have shared the planet with people who were not much taller than three feet. Early man may have had facial features with a very extended jawbone and that over time these have changed due to our change in diet.

We crossed the Equator this afternoon and therefore we had to subject crewmembers to the judgment of the Sea King and Queen. Crewmembers who are new onboard the ship were led to the king by other crewmembers dressed as pirates. They had to kneel down to the King, kiss a large fish and then be covered in slimy goo by other crewmembers, all while the guests took pictures. Legend has it that this will provide us safe passage over the equator.

We also had another new lecturer by the name of Dr. Valerie Mock who spoke with us about Zheng He, Ibn Batutah, Tenjiku Tobubei and other early explorers in the Indonesian waters. Her expertise is in commodities and so she will be speaking about the spice trade, as well as other products, that shaped the world to what it is today.

The evening’s entertainment was the show called Variations by the Rotterdam singers and dancers. We had seen the show early in this voyage but enjoyed it again.