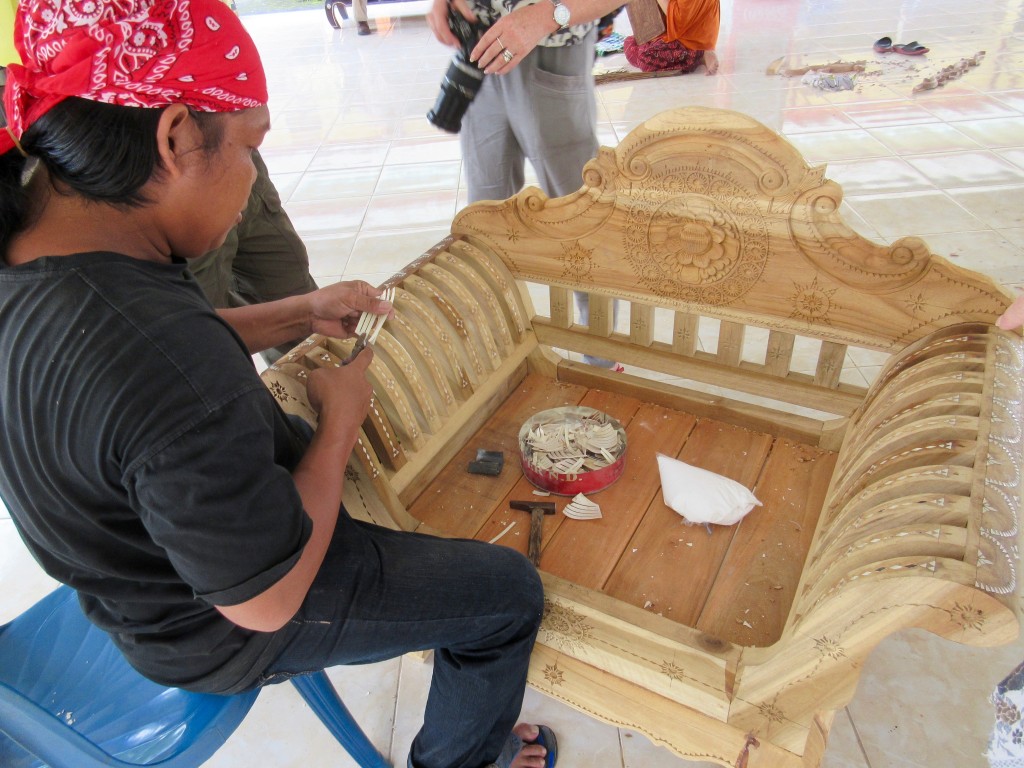 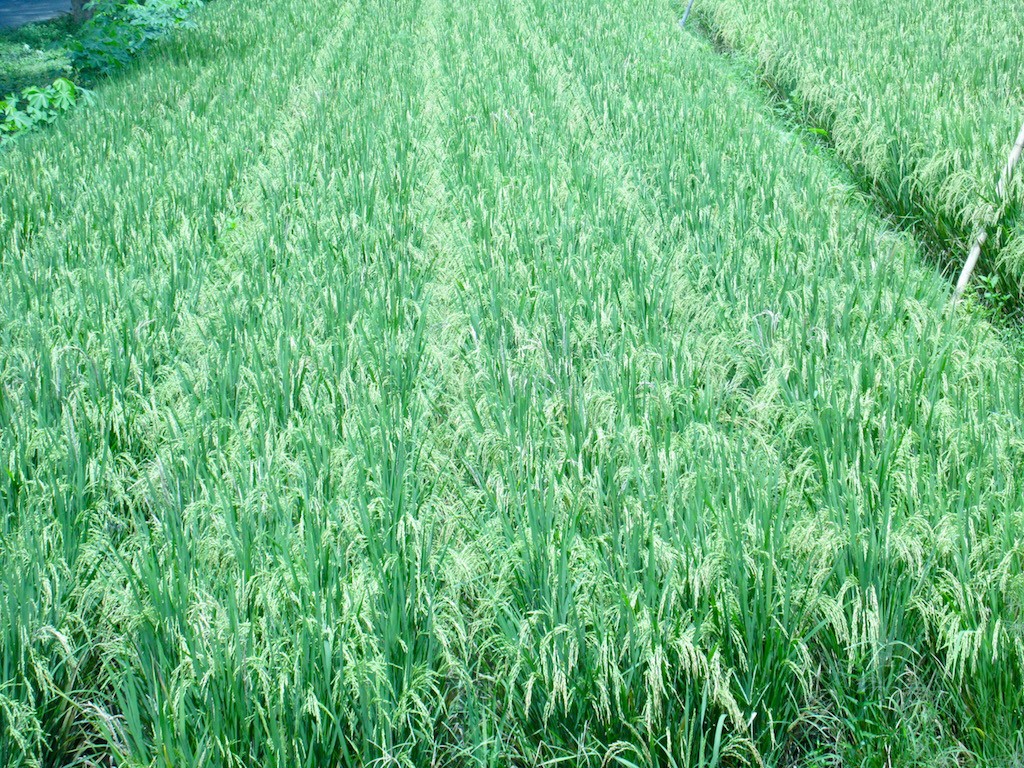 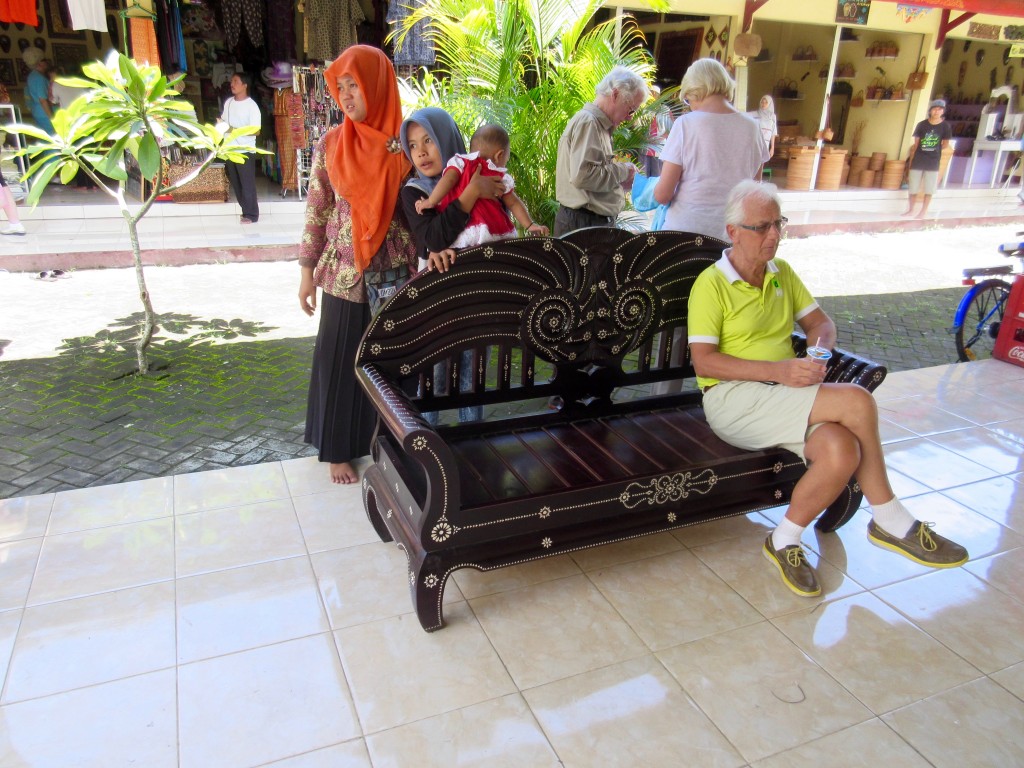 Lembar is located on the island of Lombok in Indonesia east of Bali. They say that Lombok is what Bali was like before the tourist arrived and hotels were built on all of the beaches. Lombok has a population of about 3.5 million inhabitants and is home to the second tallest volcano (Mt. Rinjani) in Indonesia at 3,726 meters. 90% of the islanders are Muslim as was evident by the huge number of mosques that we saw around the island.

Our tour was titled “Mataram Highlights” but it was more of a shopping tour than anything else. Mataram is a larger city near the port where we tendered ashore. We drove about 45 minutes to the town of Lingsar where we visited the Lingsar Temple Complex built in 1714. This temple is the most important temple on the island for the Balinese people and for the local Sasak people who adhere to Wetu Telu Islam. This temple has a special area set aside for both the Muslims and the Buddhists but also has a central area where people of all faiths can come together. Its fountain contains fish that are believed to appear only when a persons wish is going to be granted. Many visitors throw coins into the fountain in hopes of seeing the fish and their wish coming true. The temple in general was very plain and not much to look at.

Our next stop was in the town of Sesera where we visited the Sayang Art Market. The market is a handicraft type market where people were demonstrating the making of baskets, carving wooden doors, inlaying wood furniture with some white material in elaborate patterns. The furniture would then be stained dark brown and the contrast with the white inlay was very beautiful. Here there were maybe twenty shops selling all types of local crafts, woodcarvings, batik clothing, pearl jewelry, masks baskets and more. Then we visited a pearl shop that had all kinds of pearls made into all types of jewelry. These are salt-water pearls that are harvested here on the island.

Finally we visited the Nusa Tenggara Barat Museum where we saw displays of cloth, Kris Knives, shadow puppets, drums, “mystic” paraphernalia-amulets used to acquire supernatural force, immunity from weapons or to foretell the future. The collection was quite extensive and beautifully displayed although they have no air conditioning so it was a bit uncomfortable.

The countryside is lush and green with many rice fields, fruit trees like bananas. The roads are well paved and many of the homes are much more substantial than some that we have seen in other ports. Most of the locals wear western style clothing although you do see some batik shirts and skirts. The mosques were a highlight as they dotted the landscape everywhere we visited. Many of them were still under construction but the domes and minarets soared above the landscape in vivid colors of all shades. The pony carts are very popular here.   We saw many of those transporting people and goods all around town.

The entertainment was a show by the Rotterdam singers and dancers titled Iris. We had seen the show once before but still enjoyed it this time.