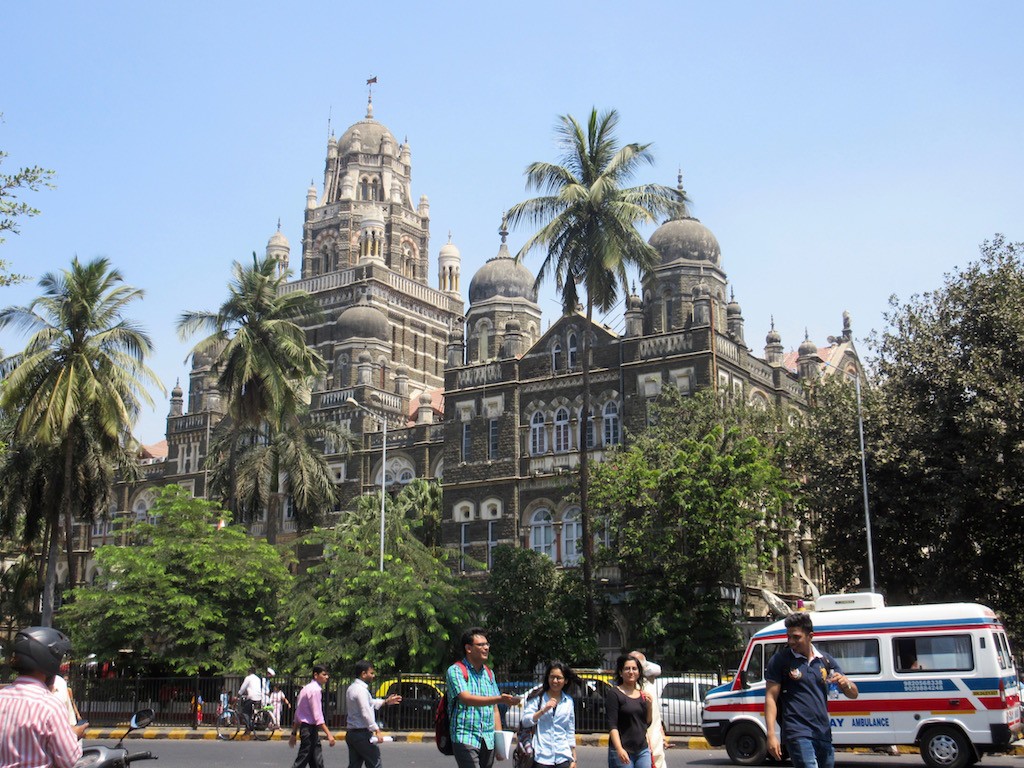 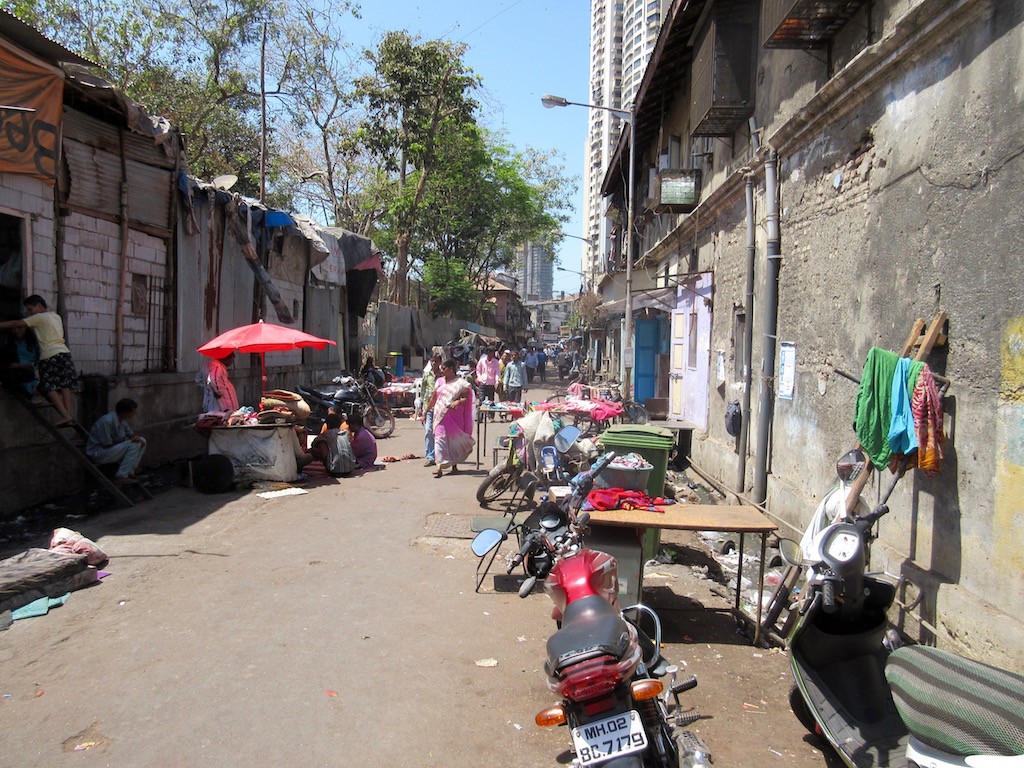 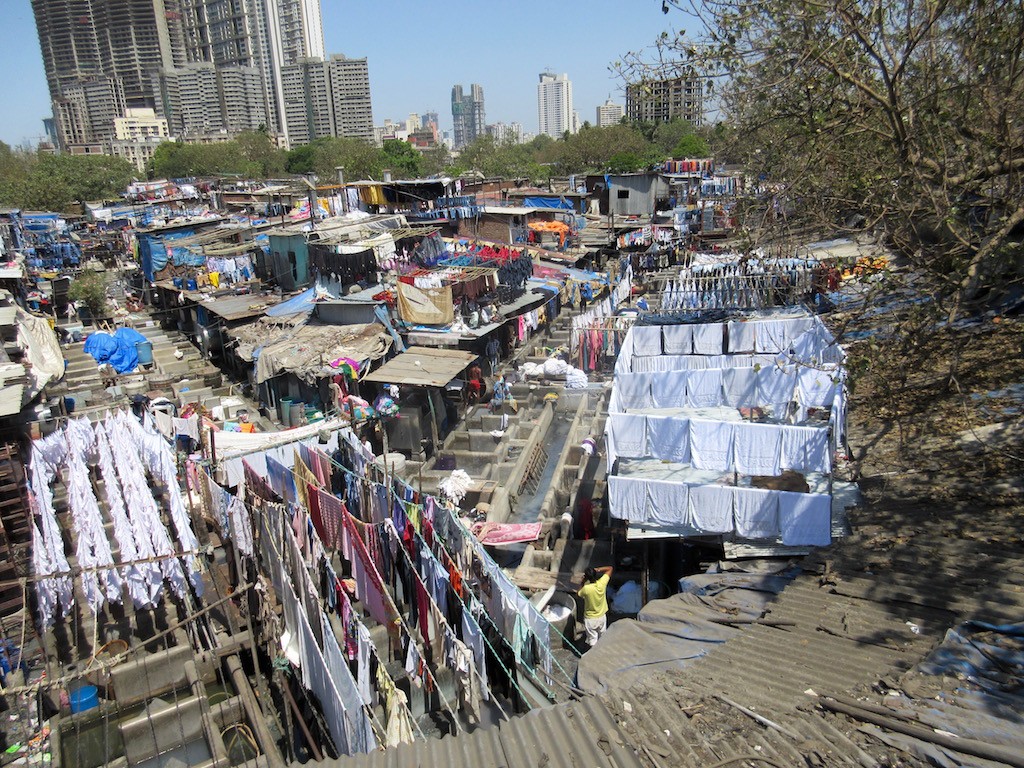 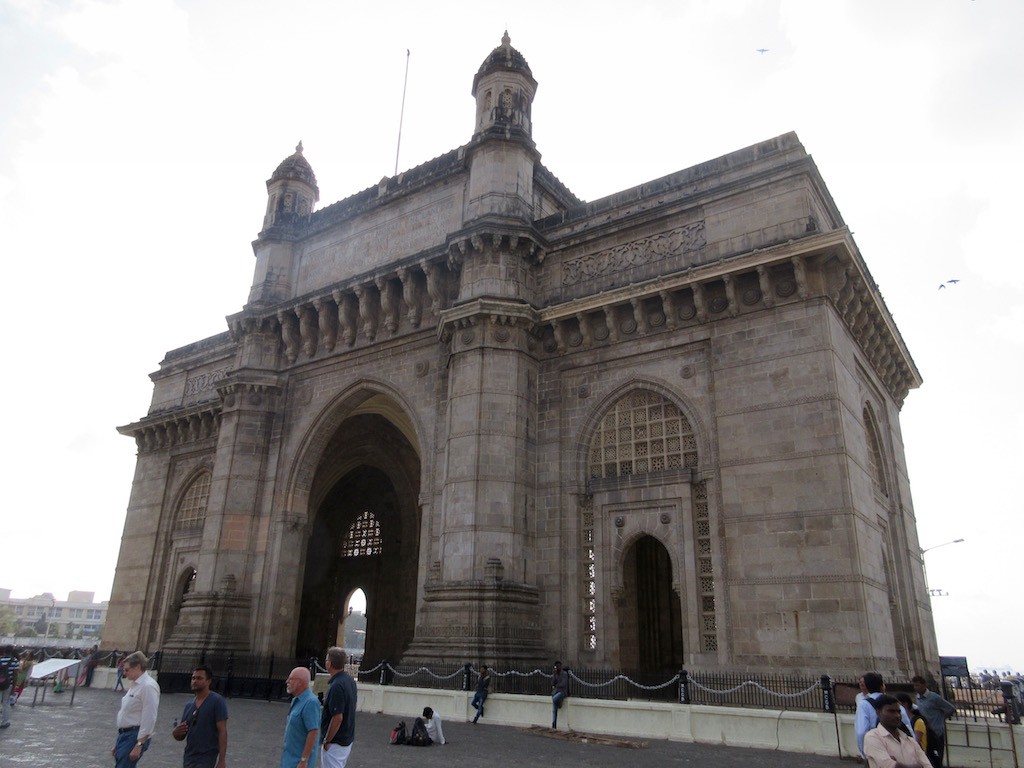 Mumbai is the capital city, wealthiest and most populous city (18 to 22 million inhabitants depending on who you believe) in India. It is located on the central west coast of India on the Arabian Sea. Mumbai was comprised of seven islands until 1845 when a large-scale land reclamation project coalesced the islands into a single land mass. In 1661 King Charles II married Portuguese Catherine of Braganza (whose father was the King of Portugal) and as part of her dowry Charles received Tangier and the seven islands of Bombay.

Today, Mumbai is the financial, commercial and entertainment capital of India. The city is home to numerous financial institutions, headquarters of many Indian companies, and home to India’s Bollywood and Marathi film and television industry.

Mark had booked a private tour online before we left home for us, and our friends Robert and Dennis from Cambria, California. Our guide for the day was Pranav, a 32-year-old young man with a company called Grand Mumbai Tours. Pranav met us at the port gate with a car and driver to show us the heart of Mumbai.

Our first stop was the famous Indo-Saracenic archway called the Gateway of India, built in 1911 for the arrival of King George V and Queen Mary. This gate greeted many steamship passengers over the years and served as the final point of departure for the British troops leaving in 1947. Next to the Gateway is the Taj Mahal Palace Hotel built by Tata after he was refused entry into another once famous local hotel called the Watson Hotel. The Taj was hit by a terrorist attack in 2008. We did see the nearby Watson hotel, which today is a rundown building housing attorneys offices and where homeless were sleeping in the lobby.

We then walked around the Mumbai University buildings, the Bombay High Court and the Rajabai Clock Towers. These buildings were built during the British Rule in the colonial style and are absolutely stunning buildings. The exquisite stone buildings have intricate ornamentation and gargoyle downspouts, not to mention the beautifully landscaped grounds.

Across from the courthouse is an enormous Oval Maiden park area where thousands of men were playing cricket this Sunday morning. Cricket is an obsession in India and every square inch of this huge field was filled with different games crisscrossing into each other’s field of play. It was difficult for us to see which players belonged to which team and where one game ended and the next began. Pranav explained how cricket is played and how it is similar to baseball and the locals were very friendly to us. They wanted us to have a try at cricket but we none of us were that interested in embarrassing ourselves. They wanted pictures with us and we obliged.

Our next stop was the Victoria Terminus Train Station, built in 1887, to commemorate Queen Victoria’s Golden Jubilee. Here millions of commuters arrive and depart each day on trains packed with passengers. It is another incredible building constructed during the British rule and has withstood the test of time. The interior is not much to look at but the exterior architecture is gorgeous. From here we headed to the Crawford Market where we found people selling just about anything you might need. What we found interesting here was the type of shopping carts they use in the market. At home we have carts with wheels that you push around the market. Here they have men with large round baskets on their heads. If you have money, you would hire one of these men with a basket to follow you around the market. As you make purchases, the man would place them in the basket until you had finished your shopping and then help you to your taxi, tuk-tuk or driver’s car for the trip home. Also of interest was the large number of animals available in the market. They were selling kittens, puppies, birds, fish, chickens, guinea pigs and a variety of pets. Pranav purchased a variety of cashews with dried chili’s, garlic and other herbs on them for us to try.

We then drove along Marine Drive and Chowpatty Beach known as the Queen’s Necklace. The water is not particularly clean so the locals do not swim here and they prefer light skin to darker skin so they prefer not to sunbathe. In the evening, however, the promenade is filled with locals who come out for a seaside stroll and to eat at one of the many food stalls at Chowpatty Beach. The beach is picturesque in the shape of a semicircle with the high-rise skyline behind and at night is illuminated creating the look of a necklace.

We visited the Iskon Hare Rama Hare Krishna temple built in 1987 by a wealthy Jewish family. On this day there were many families here praying and enjoying food that had been provided by a local family. The main sanctuary was located on the second floor with beautiful paintings, an altar and elaborately carved wooden ornamentation. The parishioners sit on the floor as there are no chairs. Many were lying face down on the floor perpendicular to the altar to give thanks. This assures that their feet are not facing the altar, which would be disgraceful. This is one of the most visited temples in Mumbai and on Sundays the temple has about 10,000 visitors.

For lunch, Pranav took us to a local restaurant where we had a delicious vegetarian lunch. Each place at the table had a large stainless steel tray with about 7 smaller dishes inside of it and two dishes on the table next to it. The servers would come to each table with a unique serving dish with four compartments. From each compartment they would dish up a curry, vegetable, or dessert like dish. The main dish would be filled with rice, three kinds of breads and several spicy sauces. By the time they had filled your plate you had about 18 or 20 different items to eat. Like an all you can eat buffet, you could have as much of any of these items as you would like. It was all very good but too much food to eat.

We then visited the hanging gardens where a local religion believes that a proper burial is to have the body hung up for birds, vultures and nature to finish the body off. The vulture population is gone today but this strange practice is still done. Next to the area where this practice is done there were once open reservoirs that the vultures would drop flesh into and thus contaminated the water. So during the British rule, the reservoirs were covered over and a lovely garden was planted here. This area includes many high-end residential housing towers that overlook the park.

Pranav took us for a drive through the red light district where prostitution is legal. Similar to what you see in Amsterdam, the woman have very small rooms along the street and they are mostly dressed in Sari’s out in front for you to see them. We were there in the afternoon when things were quiet but we were told that it is much busier at night. You can get a woman for about $3.00. Yep!

We then visited the Dhobi Ghat or main laundry of Mumbai. Here in a small valley, many people are employed to soap, soak, boil and beat the laundry before it is dried on rope clotheslines (without clothespines) and then ironed before being returned. Most of the hotels, uniforms and laundry of Mumbai is processed here making for a colorful photo stop.

From here we took a local train at the cost of 5 Rupees (Local exchange rate today was 64 Rupees to the US Dollar) a few stops across town so we could experience the local train. Being a Sunday, the train was not so busy which was a blessing since there are no door or windows and no air conditioning on the trains.

Pranav then took us to him home that his family has lived in for the last 70 years. Here he lives with his mother and father and aunt and uncle in a small apartment located in a complex of about 300 units. They had a small living room, a decent sized kitchen and three small bedrooms. Pranav’s room had a small desk and chair but no bed or other furniture. His bed is a thin mat that you roll out on the floor. He rolled up the mat and placed a brightly colored piece of fabric on the floor for us to sit on. Pranav said that he comes from the Brahmin cast, which is the highest cast in the country, and that this was an upper class neighborhood, but it was very modest by our standards.

Back onboard the ship we enjoyed a local show called the Magic of Bollywood. India is the largest producer of films in the world and the Bollywood films are very popular here. The typical movie includes boy meets girl, they fall in love, a villain creates a problem for the relationship before all is resolved and they live happily ever after. This live stage show included elaborate and colorful costumes and many local dances like you might experience in a Bollywood film.