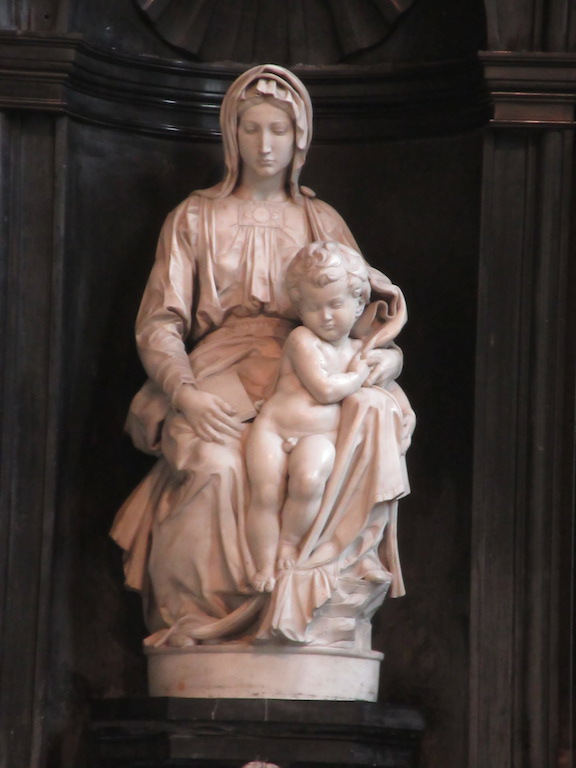 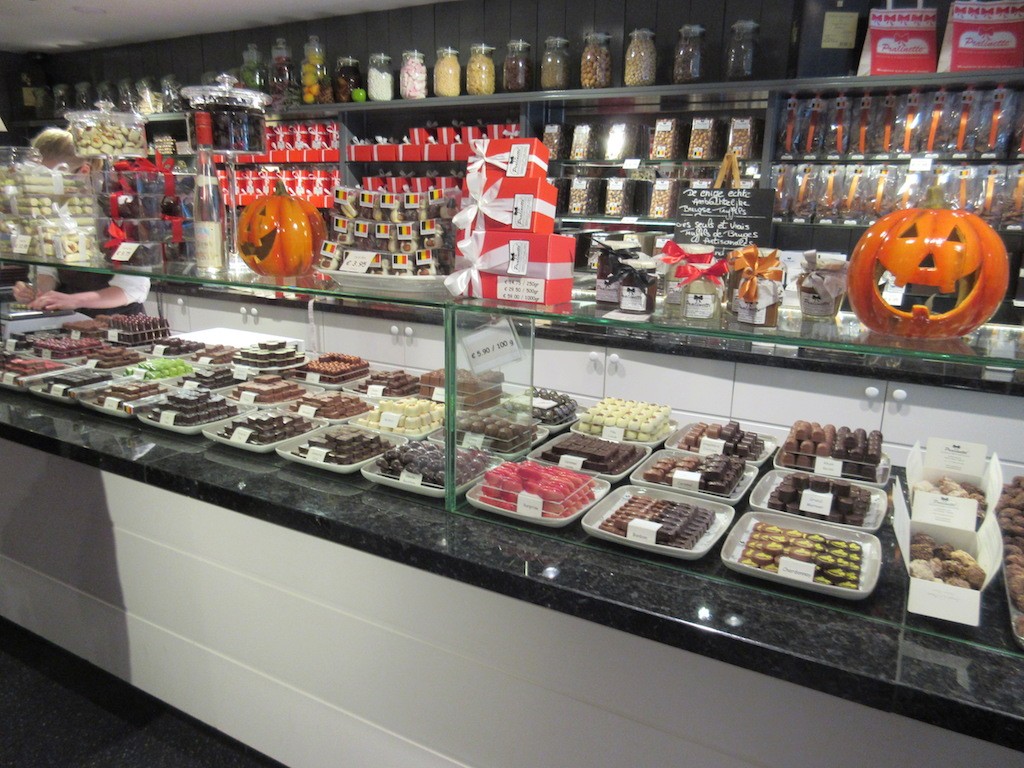 Our buffet breakfast was served in the Orangerie room with a view of the hotels inner garden. Scrambled eggs, fresh fruit, cold-cuts, bacon, sausage, pastries and breads, cereal, juice and coffee were served. Very nice! We met a couple named Marie and Charlie at breakfast who were on the river cruise we took last year from Paris to Normandy and back. Otherwise we do not recognize any of the folks on the trip with us.

Our local guide, who grew up in Bruges, took us on a three-hour walking tour around the center of town to see some of the highlights. We visited the Onze-Lieve-Vrouwekerk church which dominates the Brugian skyline with its 373-foot-tall tower. This makes it the second highest brick building in the world. Building work on the current church began in 1225. It has a main central nave in Tourney stone finished in a typical Gothic style. It was the 15th century before a spire crowned the church tower, and even later when the choir and the central nave were finally roofed over.

The highlight of the church is Michelangelo’s marble Madonna and Child from 1505. The choir contains the tombs of Mary of Burgundy and Charles the Bold. Above the alter hangs a triptych showing the passion of Christ by the official court painter of Margaret of Austria, Bernard van Orley.

We also visited a chocolate shop where they make their own chocolates and we even got to sample the chocolate.

In the afternoon we went out walking with several ladies who are traveling alone. They were interested in visiting the Adornes Estate which has been in the same family since the early 1400’s. At the estate you are able to visit the Jerusalem Chapel that was consecrated in 1429 and was inspired by the Church of the Holy Sepulcher in Jerusalem. We also visited a very ornate church called St. Anna’s Church, the Basilica of the Holy Blood and Magdalene’s Church.

Along our walk we took in the Begijnhof Nunnery where we visited a small museum on the site. Just outside of the nunnery was a large section of canal where a large number of white swans were hanging out.

We stopped at a small waffle shop where we ordered Belgium waffles for everyone. The waffles came with chocolate, bananas, honey or plain. The waffles were made from a thick dough and they have a fair amount of sugar in them. The density of them is much heavier than we have at home.

After our four hour walk, we joined the other guests at a local brewery where we each tried a local variety of beer. The type of beer that I tried was one that was a bit sweeter and had a cherry flavor. Still not my thing, but it was interesting to try.

For dinner Kent and I had a bite to eat at an Asian noodle shop called Marco Polo Noodles. The food was very nice.